Nioh 2 is the best soulslike yet, a disruptive spin on the masocore genre that feels blessed with a blistering pace in combat despite its clever focus on tactics and staging in-between. By boldly splitting up the conventionally connected environments of its forebears, it delivers a replayable, pulse-pounding adventure for those trying to scratch the itch and offers the first fully co-op soulslike campaign – a revelation in its own right. Its devotion to history and folklore in tow, Nioh 2 forges a compelling identity for itself within a derivative genre.

About a minute into Nioh 2, the narrator who is regaling the game’s story, in typical FromSoftware fashion, is forced to cut their monologue short as they’re speared to death by a snarling red-eyed demon.

In a moment where I was confident that the game was leaning on tropes, it chose to cut right through the fog, setting a disruptive standard right out of the gate. This is Nioh 2’s masocore mission statement, one it follows diligently throughout the rest of the game.

Any game that dares to call itself a soulslike is always going to face critique for its derived aspects, but you have to remember that the original Nioh was samurai Dark Souls before Sekiro was a glint in Miyazaki’s eye. Framed during the Sengoku Jidai – a busy period of warring states in Japanese history – Nioh 2 is technically a prequel to the original, which was well renowned for its crushing difficulty and historically interesting narrative. It followed Irish samurai William in the dying throes of the Sengoku period, prior to the rule of the Tokugawa shogunate.

Related: Ori and the Will of the Wisps Review 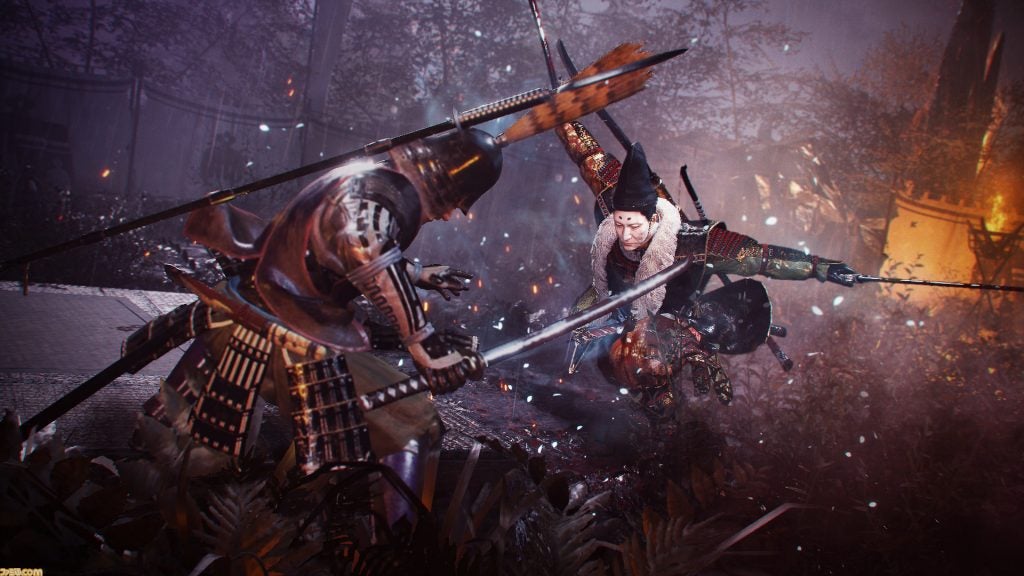 Yet in Nioh 2, Team Ninja offers you a blank slate to create your own samurai, complimented by a remarkably robust character creation tool. I spent an inordinate amount of time trying to perfect the violet streak in my warrior queen’s flaxen hair, but the gate is open for players to make unique characters and pop culture icons, with the ability to share your protagonist built-in with handy character codes. The game even seems to be self-aware of its toolset, with the option to reinvent your character being a pool you have to lean into, Narcissus style.

Opening crawl aside, you’ll quickly be blindsided by an unusual interface and staging system in Nioh 2’s opening hour, one very different from what you might be expecting from a soulslike. The game is split up into disparate missions that you can complete multiple times for better loot and hidden collectables – your only means of escape from each level being death or a special set of rare items, which develops the level of caution.

There are your more intricate main missions with boss battles and cutscenes, but also side missions and tricky twilight jaunts that remix previous maps and throw gauntlets of Yokai at the player to test every weak point.

Some of the sub missions are story relevant too, with none of them feeling like uninspired fetch quests relying too hard on the joy of the main maps. One had me chasing a Kappa for its riches through a linear path full of demons – it felt like an R-rated Crash Bandicoot level. Another had me searching for Nioh 2’s resident cuties – the Kodama – and facing unlikely collections of Yokai in tight arenas, forcing me to rethink my muscle memory and consider more of the game’s catalogue of weapons and skills. 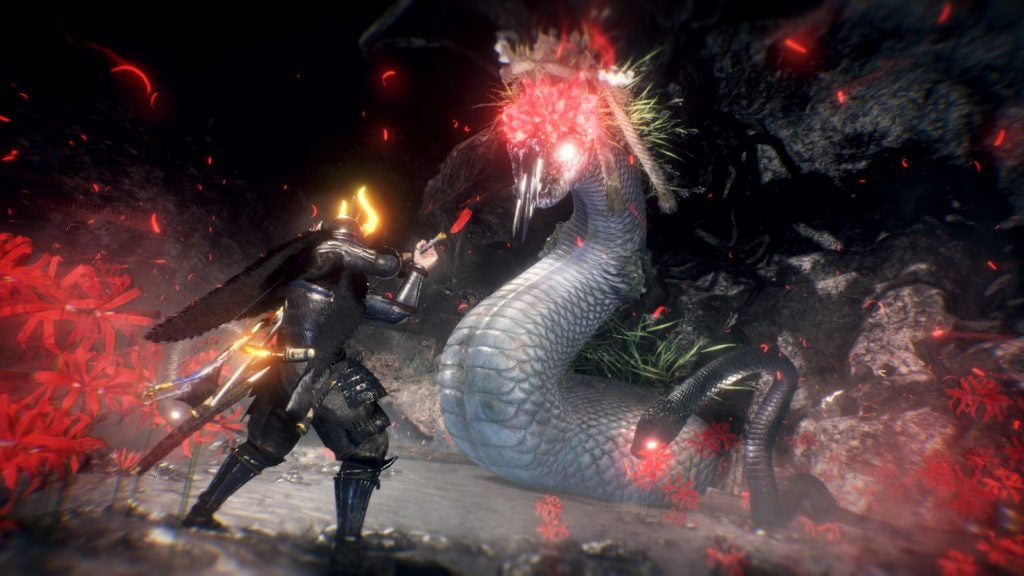 Nioh 2’s online co-op puts a spin on this already brave system by including an assist gauge based on player deaths to determine a mission’s fail state. It’s very refreshing and turns the game into an exciting co-op brawler that rewards communication and tactics.

The single-player is still an absolute riot, but co-op quickly became my preferred approach to the game and I’ve since enjoyed a lot of the story with my review period partner in tow, crafting our builds to complement one another and deconstructing the boss fights we’re struggling against.

Most importantly, before you even commit to a level in Nioh 2 you’d be foolish to skip the starting area –  a pre-game tab that includes a set of prep stations to engage with before you embark on a mission. This includes a shrine at which you can pray to level up, a dojo for honing your craft and various character-tuning systems.

One shrine allows you to change your Guardian Spirit, a new feature for Nioh 2 that lets your character flex their half-Yokai heritage in battle, transforming into a devastating beast to deal massive damage for a short amount of time. Likewise, you can attune soul core skills to your spirit in a separate menu, gained from the bodies of slain Yokai and grafted straight out of their moveset, turning you into a spear-hurling monkey or a burrowing Warai for a short few seconds. 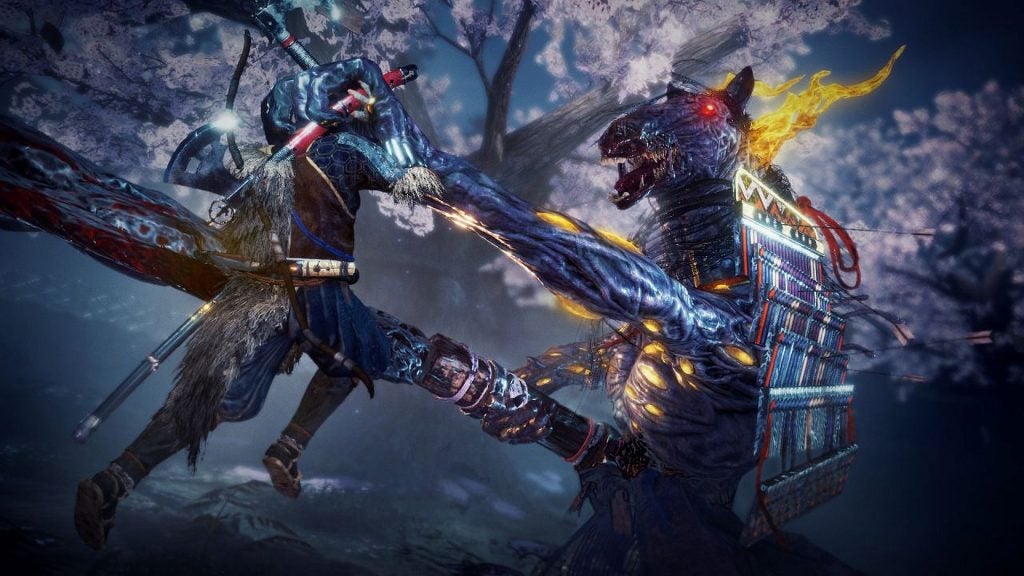 Eventually, you’ll unlock a blacksmith which offers even more menus to contend with. This is when the game starts to feel a lot more like Monster Hunter than Dark Souls in its staging, with menus to soul match and temper the special effects of your weapons, and much grinding and disassembly required to forge the finest tools and equipment sets in the game’s arsenal.

If this is starting to feel like a bit too much to contend with – a sizable salvo of menus and systems placing a barrier in between you and the meat of the game – you’d be half-right. Perhaps my main problem with Nioh 2 is the amount of time you spend between missions preparing and sorting your gathered loot, of which there is plenty.

Some weapons are corrupted by the Yokai that dropped them, others contain a nuanced sentience system where – once you’re familiar enough with them in battle – they’ll start talking to you about what led the spirit to inhabit the weapon you’re currently lamping a Gaki with.

My co-op partner and I would often complain about the time it takes for us both to completely prepare before we move on to the next mission, especially given that Nioh 2 is such a sizable game – the campaign spans several map screens. Yet in honesty, I’m the kind of person who finds a sick enjoyment in crafting the ultimate armour and weapon build. I spent many happy half hours tuning my samurai and their trusty Tonfa, resetting skills and wasting money on failed forges to ensure I was the apex Yokai predator. 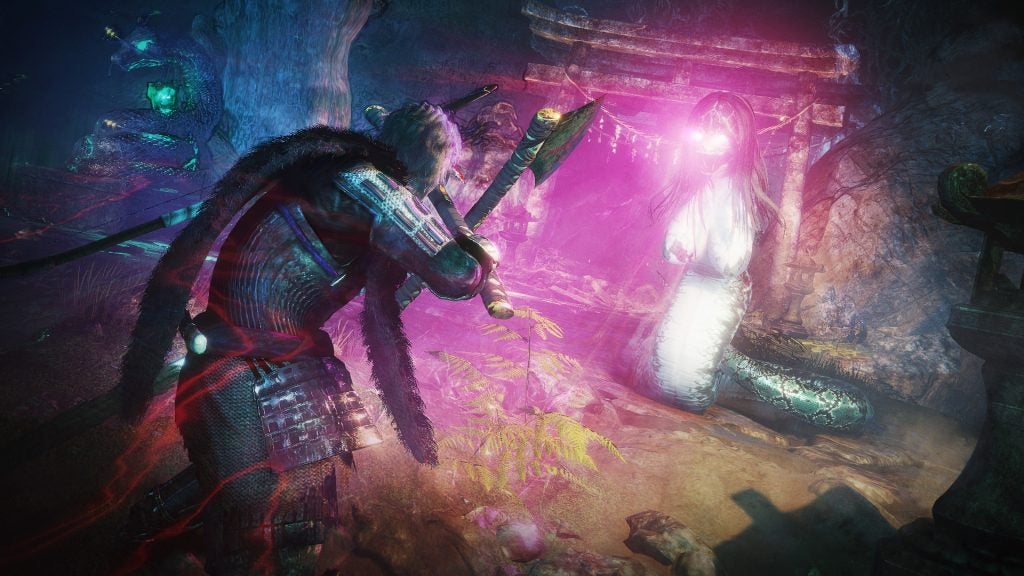 Your mileage may vary when you get your hands on it, but it never deterred me from pressing on, and that’s testament to the combat and the unpredictable enemies that Nioh 2 constantly throws at the player.

The game leans hard into Japanese folklore, specifically Yokai, resulting in some truly horrific enemy designs from the depths of the collective unconscious. Unremarkable umbrellas suddenly dive at the player, eyes ablaze with fury. Naked, toothy-grinned burrowing monsters erupt from the ground to stun and overwhelm.

Nioh 2 contains a laundry list of nasties that will fuel cheesy nightmares and send your adrenaline into overdrive. You’ll be pleased to learn that  boss battles are creatively varied and even the small fries you start the game walloping can unravel you some forty hours in. When you defeat multitudes of these enemies you also begin to understand their language – their gurgled, garbled death knells become speech which the protagonist can interpret eventually, a deft touch from Team Ninja. 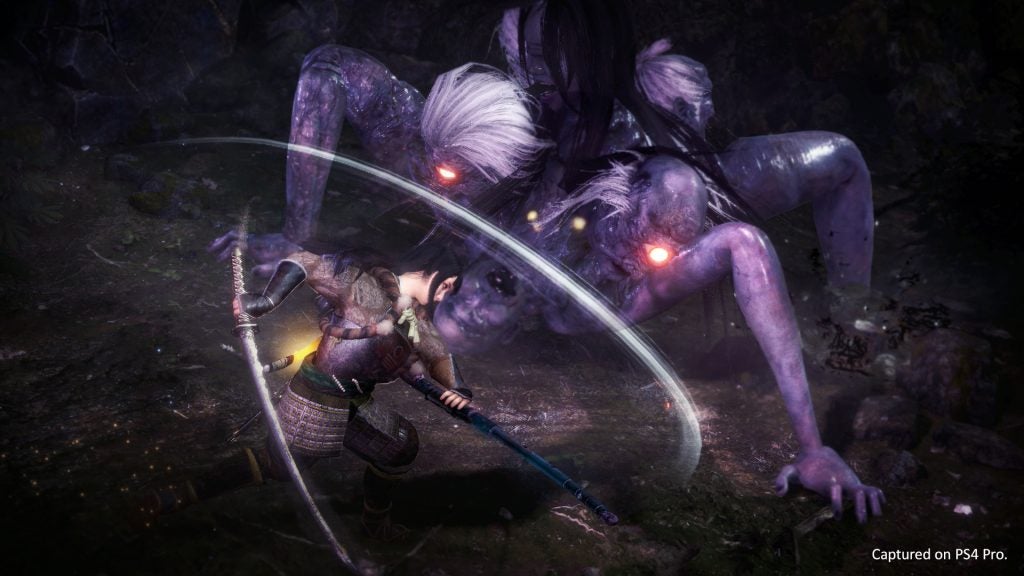 Personally, I find Yokai fascinating and in my downtime, I’ve found myself reading each entry in the game’s illustrated glossary to research the stories behind these beasts. Just watch out for the walls with eyes baked into the concrete, ok?

The detailed particle effects and minutiae of Nioh 2 really make the experience sing. It was gorgeous to look at on the PS4 Pro, sliding through shoji and foliage at a silky 60fps in Action Mode, the game’s most stable resolution setting.

Maps are detailed and reward exploration, with clever enemy placement catching you off guard down the various Daedalian routes that divert your attention from the main objective.

It doesn’t look like Nioh 2 has much to offer PVP-wise which may concern Souls stans, but I still thoroughly enjoyed the process of fighting revenant spirits of other players to gain the items necessary to summon them.

It’s a fantastic call and response loop that makes you engage with the multiplayer PVE elements of Nioh 2 without feeling bad about ‘cheesing it’. You only have a certain amount of Okochu cups at any given moment, and if you run out you can fight with the build of a stranger from across the world to regain them. It’s a clever way to create use out of the useless corpse markers seen in games like Dark Souls. 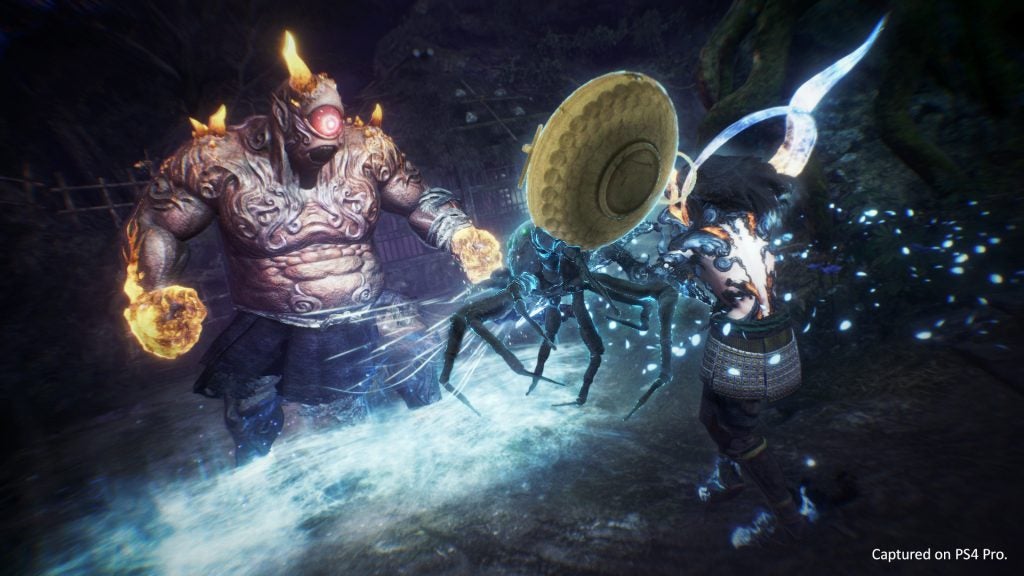 Nioh 2 is an absolutely Herculean effort from Team Ninja that shouldn’t be overlooked as we approach the busy season. They’ve managed to make a game that stands on its own beside some of the best From Software games, a soulslike that is brimming with ambition and brave new ideas.

Story-wise, the game makes a considerable effort and Nioh 2 is full of historical figures and high-stakes drama for those willing to lean into it. Personally, I was too caught up in the thrall of the game’s dancelike combat to keep it all pinned down in my head, though I made earnest attempts to catch up by reading character biographies and watching old cutscenes.

The main meat of the game is almost too much fun for the narrative to truly demand your attention. Stringing together Ki pulse combos and unleashing your demon power is inexplicably awesome, and with the litany of interesting Yokai and staging systems in place, the game never surrenders to complacency.

From stance-switching to soul cores and the boon of unbridled demon power, there’s always an alternative ready for you to up the ante in Nioh 2, a game that I’m struggling to put down, an unexpected surprise that makes a steely case for game of the year so far.