Level-5 is a legendary JRPG developer. In the past two decades the studio has created beloved gems like Dark Cloud, Professor Layton, Rogue Galaxy and more. Its pedigree speaks for itself, and few louder than 2010’s Ni No Kuni: Wrath of the White Witch. With the help of Studio Ghibli we saw the inception of something truly beautiful. The worlds of gaming and anime met in a seamlessly gorgeous adventure worthy of the talent behind it. Now, the series returns with its long awaited sequel: Revenant Kingdom.

It’s a worthy successor, too. While its story doesn’t carry the same emotional weight, the wonderful combination of gameplay systems help construct something that will keep you hooked. Ni No Kuni 2 is a homage to JRPGs of old while simultaneously pushing the genre forward with infectious enthusiasm.

Revenant Kingdom tells the story of Evan Pettiwhisker Tildrum, the young king of Ding Dong Dell who wishes to create a land in which everyone can live happily ever after. Of course, this is easier said than done.

After being dethroned and banished from his homeland, Evan teams up with the mysterious Roland and Sky Pirate Tani to travel the world in search of a new home and worthy allies. The narrative is unremarkable yet serviceable. It’s a tried-and-true tale of uniting the world in an effort to banish a greater evil that hits all the notes you’d expect.

If you didn’t play the previous game, don’t worry. With the exception of a few references, this is a completely new tale.

Luckily, the luscious setting and lovable cast of characters make up for the pedestrian plot which fails to effectively convey a series of backstories. Beyond a few key scenes, the likes of Roland and Tani seldom see their personalities explored, which would have been a key opportunity to grow closer to otherwise endearing faces.

Aside from the inconsistent narrative, the rest of Ni No Kuni 2 is fantastic, reaching similar heights to some of the generation’s finest role-playing efforts. The combat is fast and flashy where exploration echoes the brilliance of golden era Final Fantasy. 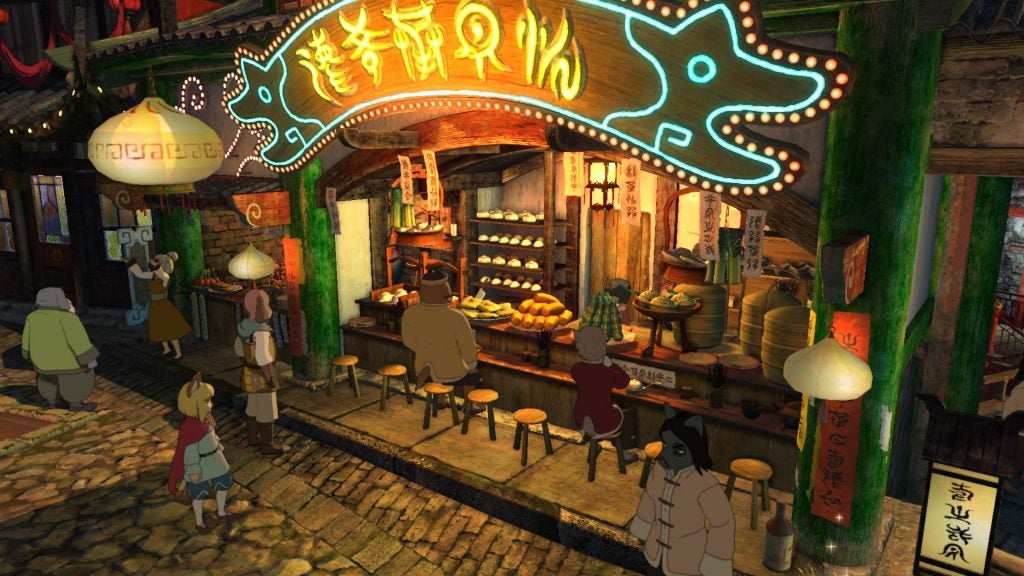 Battles are a notable departure from its predecessor, abandoning the ‘familiar’ system of capturing creatures to fight for you and opting instead for something more akin to the Tales or Kingdom Hearts series. Your party consists of three characters at any given time, each equipped with the same number of weapons alongside an array of customisable skills.

It’s incredibly simple, offering a welcome level of accessibility. Light and heavy attacks are the only things at your disposal, meaning you’re up to speed in seconds. That isn’t to say things are easy, though. Larger boss battles and later bounty missions offer a formidable challenge, requiring you to outmaneuver the enemy using all items and skills to your advantage. Encounters like this are delightful, reminiscent of a firework display as spectacular effects accompany the swing of each weapon.

Higgledies are one of the defining factors of combat this time around. These small, high-pitched creatures follow you around in battle lending area-of-effect buffs and offensive assistance activated by tapping a button. I found these to be essential when fighting tougher creatures, offering a vital bit of healing or finishing off foes with dwindling health bars.

Kingmakers, the spiritual guardians of Ni No Kuni 2’s sprawling cities, act as major conflicts. These are packed with memorable moments that, among others, see you ascending a series of fluorescent platforms before plunging a sword into a beast’s back. Having boss battles suddenly forcing outside of the box thinking is a pleasant surprise. 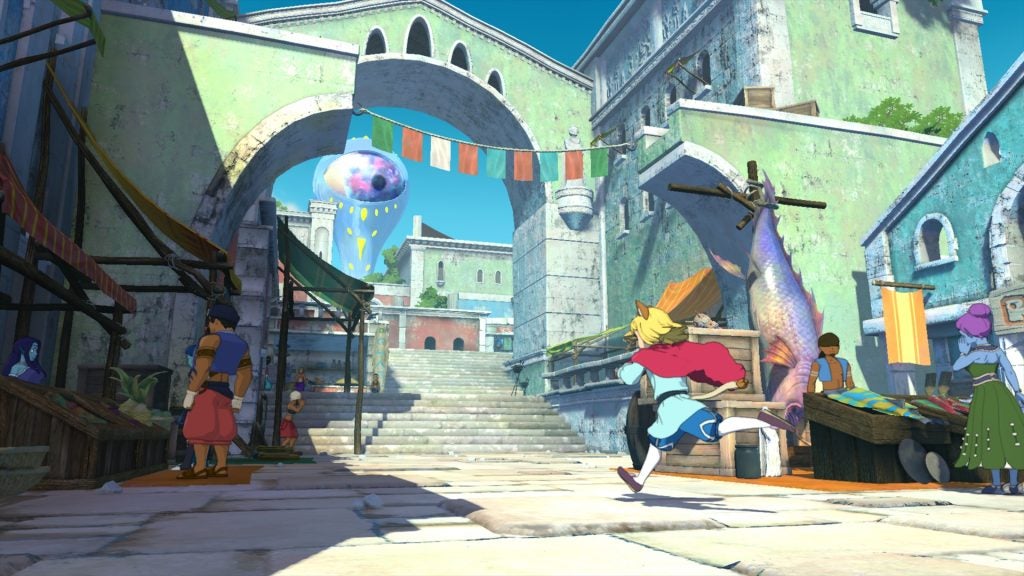 The meat of Ni No Kuni 2 lies in Kingdom Building, an exceptional city builder where Evan must construct facilities and recruit citizens to increase his influence across the world. Starting out with a miniscule plot of land, after 30 hours or so I was in command of a towering metropolis packed with magnificent architecture and populus loyal to their inexperienced monarch.

It feels like everything in Ni No Kuni 2 is engineered to compliment Kingdom Building. Evermore, Evan’s newly formed land, provided me with a sense of investment the main narrative failed to deliver. Returning to my kingdom time and time again to empty my coffers and invest in new ventures proved to be an addictive treat. The fact it provides Evan and friends with tangible benefits is a bonus making it all the better.

Kingdom Building is also the foundation to many of Ni No Kuni 2’s side quests. Unlocked by chatting to dozens of NPCs scattered across the world, the majority of these will result in recruiting new citizens to live and work in Evermore. There are literally hundreds of them, distinctly written with memorably creative flair.

Some will involve you helping a fortune teller down on his luck while another involves journeying to vanquish a dozen ancient sandworms. There’s great diversity on display and I never got bored, always eager to enhance my Kingdom and discover what this land has to offer. Then there’s Skirmish mode. 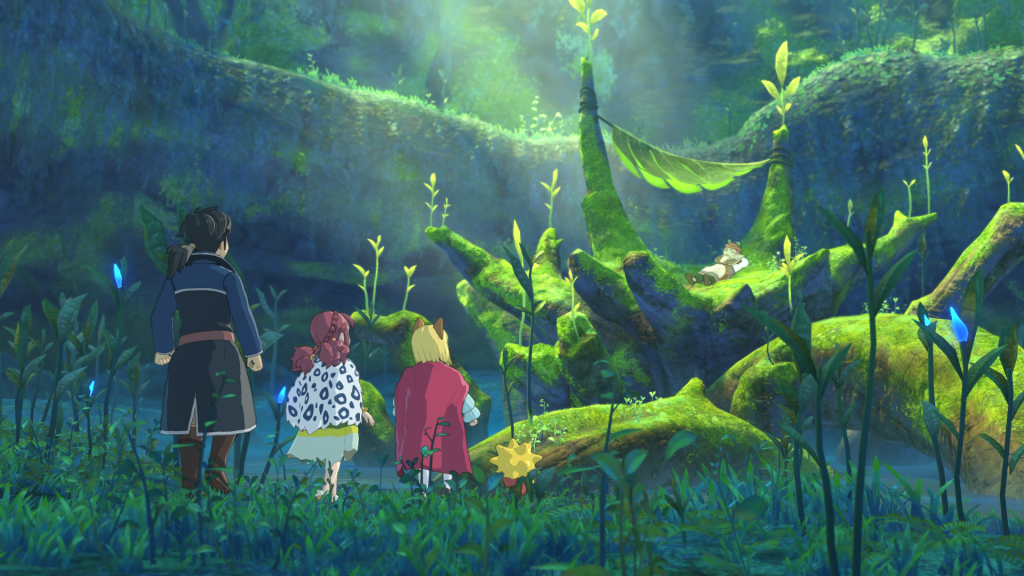 Skirmish is a lightweight RTS where Evan controls four sets of troops simultaneously across the battlefield. All troops possess a unique weakness you’re expected to exploit to emerge victorious. It’s a neat little distraction with just the right amount of depth to remain engaging. Only a select few battles are part of the main story so you’re never forced to grind arduously just to progress.

Troops in Kingdom Building are amassed from citizens recruited to Evermore. They’re all in possession of special abilities that can either buff your allies or devastate the opposing force. I must admit there’s a stark hilarity to calling in an airstrike to shower your foes before capturing every siege tower in sight.

Despite being enjoyable, this is certainly the weakest element of Ni No Kuni 2, largely because its method of progression felt inconsistent with no clear way of discerning which skirmish to tackle next outside of random side quests. As a result I was often underleveled to tackle the majority of skirmishes I came across. 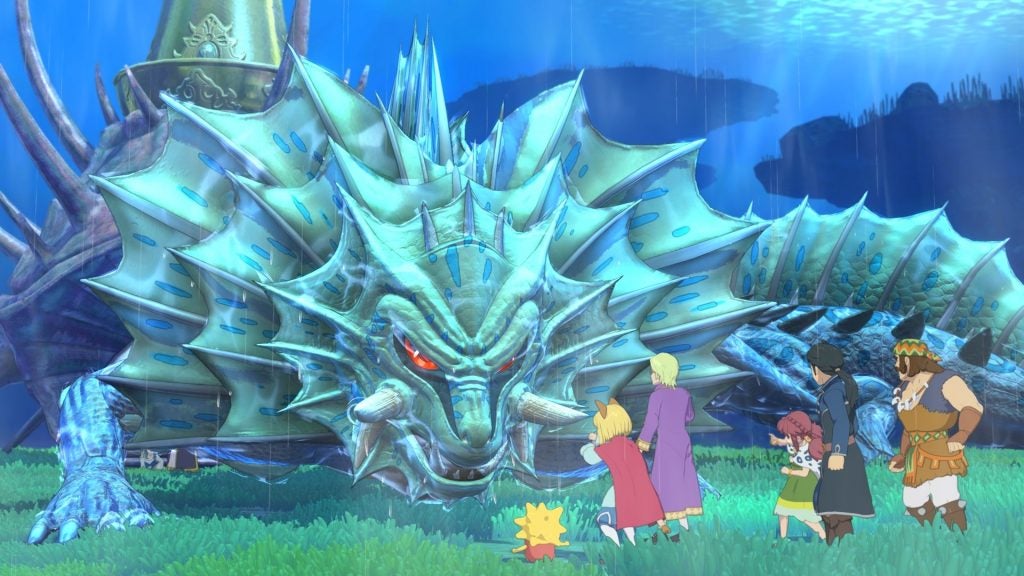 Exploring the world of Ni No Kuni 2 feels oddly nostalgic. The way in which it purposely echoes RPG design from decades past in its map and cities is a pleasure, reminiscent Final Fantasy 7’s Midgar or traversing the otherworldly planes of Star Ocean.

The illustrious city of Goldpaw is awash with eastern influences as it flaunts fluorescent neon lights and traditional architecture, combining the two creates a city with a real sense of life behind its polygonal exterior. The Studio Ghibli influence remains alive and well, leaving its welcome mark on every single facet of the game’s world, whether its a town populated by unusual cat people or a corrupt factory running on highly-advanced technology.

Such a thing becomes more apparent once you unlock boats and zeppelins for use across the overworld. Not only do these grant you access to previously hidden areas, they also help emphasis the true scope of Level-5’s world and how inviting it is to uncover. It’s almost a shame the fast travel system is so generous as you’re seemingly encouraged to avoid travelling through other means.

Ni No Kuni 2: Revenant Kingdom is a JRPG delight that embraces the best of classic design and combines it with some new and exciting ideas.

The lacklustre plot and underdeveloped characters are unfortunate, but don’t distract from what is an otherwise fantastic package.

It doesn’t reach the exceptional heights of its predecessor but remains an essential part of any hardcore RPG fan’s catalogue.