Tales of Berseria might be Bandai Namco’s strangest Tales to date – an oddball clash of styles and genres, one foot inching towards the future, the other stuck firmly in the past. In some ways it’s brilliant, thanks to some interesting mechanics, a strong storyline and a distinctive cast of anti-heroes, villains and assorted misfits. Yet there’s no ignoring its mixed production values, dated visuals and frequently dull dungeon design. Everywhere you look there are signs of a series reaching out for greatness but not quite managing to get a decent grip.

This particular Tale is the saga of Velvet Crowe, who begins the game as a teenage girl in a small village. The world Velvet lives in with her brother Laphicet and her brother-in-law, Arthur, is a perilous one, where humans are falling foul of an infectious ‘daemonblight’ which turns men and women into brutal man-slaying monsters, only kept at bay by daemon-hunting exorcists and by the hefty village walls.

So far, so tiresome, and in its opening hour Tales of Berseria seems set on dishing out the kind of kid-with-potential-leaves-village-for-adventure narrative beloved of too many JRPGs. Yet for all its bright cel-shaded manga visuals and cutesy characters, this Tales has a darker tale to tell. Before you know it, Velvet is herself a daemon, one hand mutating at will into a blood-drinking red claw. One prison breakout later, and she’s off on a quest for revenge, as Tales goes from Miyamoto to Tarantino with barely a breath. 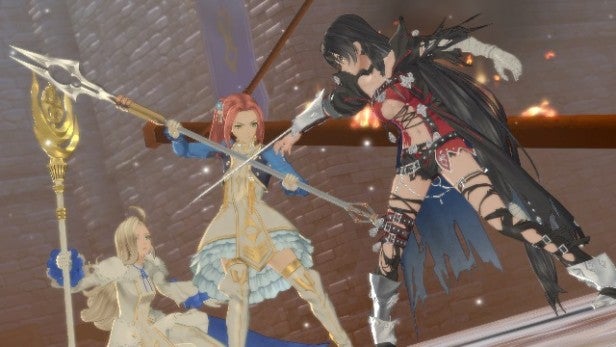 It’s a quest that will see you travelling across the breadth of the realms of Berseria, battling the might of an all-powerful religious institution – the Abbey – and the so-called saviour at its head. You’ll find yourself at the centre of a band of mysterious daemon swordsmen, pirates, mischievous sorcerors and Malakhim – the often childlike, sometimes catlike familiars who are the source of magic in this world. You’ll steal ships, fight daemons, infiltrate Abbey outposts and join forces with a shadowy underworld guild.

And while you’re doing it, Velvet will be trying to balance reason against emotion, good against evil, the wish for love against the thirst for retribution. For all that it can be cheesy, silly, dumb and played for laughs, Tales of Berseria has a surprisingly powerful storyline.

Tales of Berseria also has surprisingly complex gameplay – though maybe less surprisingly if you’ve played a Tales before. Forget any ideas of open-world freedom; Velvet and the gang wander around a series of artificially enclosed town and wilderness areas with clear entry and exit points linking one to the others. Each area is riddled with wandering monsters, blundering into one of which will start a fight. As in JRPGs of yore each monster is only representative of a larger, often mixed group of monsters, making it impossible to quite predict who you’ll be fighting. In fact, it’s possible to engage two groups at once when you’re past the first few hours. 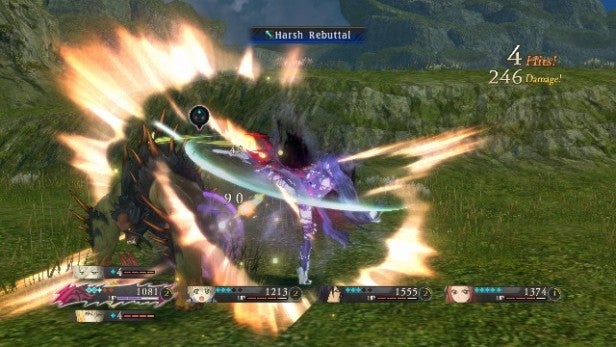 Combat is where things get more interesting. 2015’s Tales of Zestiria had a sort of hybrid combat system, bringing elements of the beat-’em-up or brawler to the JRPG, but Tales of Berseria takes this to a whole new level. All four of the DualShock 4’s action buttons trigger a specific attack, which you can string together in damaging combos. At first, you’re limited to just three moves before Velvet runs out of puff, leaving you to guard in a passive stance while she recharges, but wiping out an enemy gives you an extra move, enabling you to hit your next foe with a longer combo.

However, you can sacrifice a move to unleash a supercharged daemonic form, with a kick-ass starter move and more hard-hitting combos to follow. It’s a risk, as your lost move stays lost until you get your next kill in, but time the shift well and you won’t even notice.

With me so far? Well, dig into the menus and you can actually set a specific move to each button and each phase of a combo, enabling you to set up quite complex one-button combos or trigger brutal or specialised combos at will. You’ll continually unlock new moves as you level up, and with different moves working more or less effectively in different phases or against certain enemies, what looks like a dumb button-mashing system hides a surprisingly tactical approach. 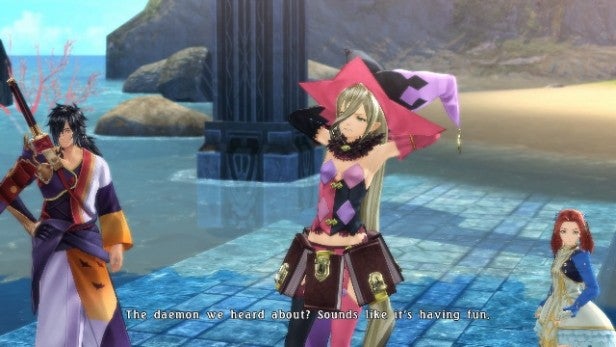 What’s more, the game then goes on to introduce another layer of super-special moves, charged by using your regular specials, plus the ability to switch between two playable characters, reducing cool-down times, negating status effects and lengthening your combo chains even further.

Throw in the fact that you’ll have other, CPU-controlled characters fighting alongside you, and that you can customise their combos and special moves, and there’s a lot to get your head around. Luckily, while the combat isn’t always all that challenging, it’s nearly always fun.

Nor does Tales of Berseria go small on other systems. Levelling itself is pretty basic and the amount of loot that’s dropped is ridiculous, but it all forms the foundation of a nice little weapon acquisition and enhancement system. An automated cooking mechanic will have you scouring the world for recipes and ingredients, with each meal delivering useful perks. There’s even scope to have scout ships exploring the seas of Berseria for you, winning sea-battles, grabbing treasure and discovering new locations. You’ll even find yourself collecting glowing orbs to rescue trapped magic kitties, who may reward you for your troubles with new accessories and apparel. 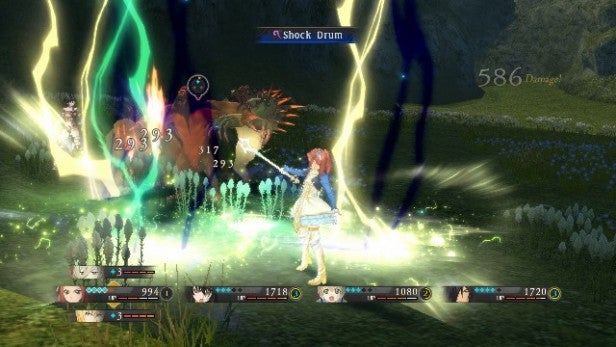 There’s a lot going on here in a lengthy adventure with the charm level set to max, and – as with the previous Tales of Zestiria – the more you play, the more you’ll get sucked in. What’s frustrating, though, is that while the new Tales beats its predecessor on many counts, including stronger, more comprehensible systems and a more immediately appealing story, it still suffers from many of the same faults.

These start with visuals that, while having a crisp, manga-like presentation, still look like upscaled graphics from a PS3 game. In fact, I felt the need to double-check that this was actually a new game, not an HD remaster of some old Tales classic. There’s precious little detail in the characters or scenery, and only some half-decent light and shadow effects remind you that you’re playing a 2017 JRPG. I don’t expect Final Fantasy production values from a Tales game, but Tales of Berseria is a long way behind the curve.

That extends beyond the graphics to include the fact that not all the dialogue is voiced and some of the dialogue that is voiced isn’t voiced all that well. The script is usually strong with some great use of humour, while the mix of anime and comic-strip for cut-scenes is actually very effective, but repeated NPC models and some flat acting still pulls the whole experience down. Meanwhile, the dungeon design remains desperately generic – as if the designers felt that simply crafting a series of bare-looking chambers and then dropping in some monsters would be interesting enough. There’s nothing here in terms of dungeon design that other JRPGs weren’t doing over a decade ago, and some of them were doing it better then. 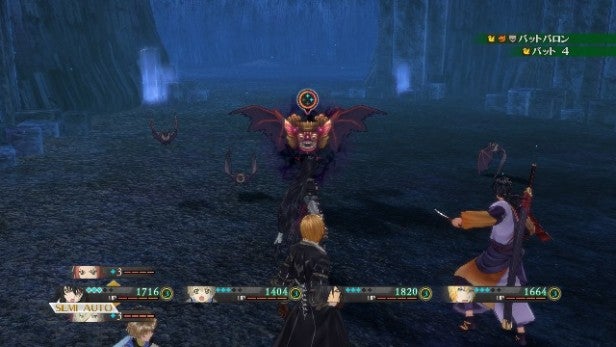 The character design won’t be to everyone’s taste. For one of the coolest, kick-ass anti-heroines around, Velvet dresses like a Toxic-era Britney Spears, only with more revealing rips in her clothing. In fact, it’s hard to think of a major female character, whether master magician or warrior priest, that doesn’t dress like they’re planning to moonlight as a pole-dancer once the fighting day is through.

I know what you’re saying – surely it’s just manga style and, as Spinal Tap’s David St Hubbins might put it, ‘What’s wrong with being sexy?’ All the same, some of us will be happier with Velvet dressed in her alternate costumes, even if she’ll still appear in her dodgy default when on cut-scene duty.

None of the above makes Tales of Berseria any less than thoroughly enjoyable. Get the first few hours under your belt and you’ll probably be hooked. It does mean, however, that it’s hard to recommend Bandai Namco’s latest JRPG to those who don’t already love the genre, and preferably love the Tales games in particular. And that’s arguably Tales of Berseria’s biggest problem. The fundamentals are all in place for a great RPG, but what we have is a good Tales for the faithful, not one with serious mass appeal.

Verdict
With a good storyline, great characters and a fantastic, action-heavy combat system, this is a high point for Bandai Namco’s JRPG series – but it lacks the attention to detail, great design and polish that could elevate that series to the big leagues over here.

Fans of Tales and fans of JRPGs will love the new instalment, but where Final Fantasy XV saw a series and a genre striding into the future, Tales of Berseria feels dated before its time.