Last year was a golden year for sports games, but even in that year NBA 2K17 was something special. Here was a basketball game so compelling that you didn’t really need to be a basketball fanatic to enjoy it (though being one would definitely help). For a while, I hoped that NHL 18 might do the same thing for ice hockey. Well, EA Sports’ latest hockey game isn’t quite on that level, but it gets pretty close. This is the slickest, most accessible and most entertaining NHL that EA Sports has made in years. It’s a great simulation if you love North America’s greatest winter sport, but hugely enjoyable even if you only know the basics.

In many ways, ice hockey is the perfect video games sport. It’s fast-paced and aggressive, without the downtime of baseball or American football. You don’t have the touchlines and stoppages of football, while hostile tackles are practically encouraged – up to a point. The challenge for the NHL series, however, has been delivering controls that reflect the skills of the game but that are also intuitive and manageable at speed. With NHL 18, EA Sports has pretty much nailed it.

As in previous versions, everything focuses on the analogue sticks, the left controlling the player, the right controlling the stick. This enables you to handle the puck and aim shots and passes with real flexibility, with R2 used to prepare and fire off a pass and L1 tapped for a quick one-touch deke. In defence mode, body checks, stick lifts and pokes can be made with a quick push of the right stick, a tap of the X button or a prod of R2, respectively. What’s great this time, however, is how well all these different moves flow together, allowing you to build up combos and passing manoeuvres that outwit defenders and give you a fighting chance of hitting goal, or that enable you to get in close to an attacker and flatten them or steal the puck. The more you play, the more it all feels right. 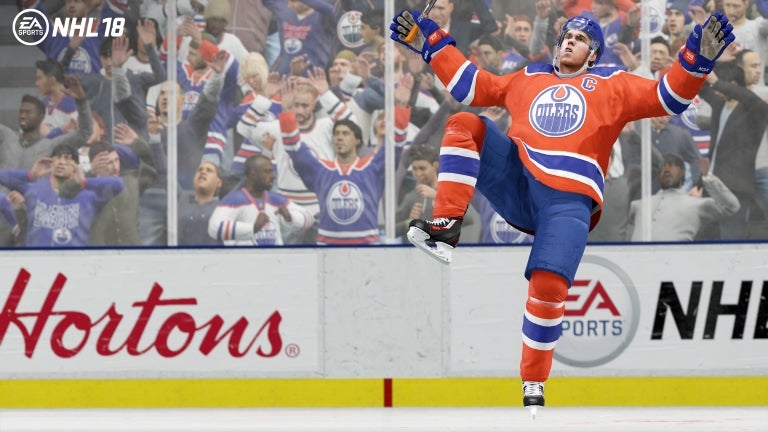 And NHL 18 really wants you to develop these skills. You can begin the game with a spell in the Hockey Canada Training Camp, learning how to move, pass and shoot or tackle faceoff draws. The mode takes you through all the main manoeuvres and tests your skill at pulling them off, so that when you go out onto the ice for real, you’ll have a decent chance of seizing victory, or at least avoiding an ignoble defeat. What’s more, as you play you can work with a subtle, context-sensitive overlay that reminds you how to pull off these moves and even gives you an inconspicuous prompt when the time is right.

What you have here is a game that’s easy to pick up and play, particularly with the arcade setting and the difficulty dialled down to Rookie, but that has the kind of depth you need for really skill-focused play. The new offensive dekes and defensive skill stick moves only feed into this, allowing you to pull of flashy dekes or disrupt an attacking play in style. NHL 18 makes you feel good when you halt the momentum of a run on goal or turn a break into a scoring opportunity. Actually sinking the puck in the net is a challenge – the goaltenders rarely let an easy one through – but when you do it always feels like a minor triumph.

Just as importantly, EA has added in new ways to play the game. You still have your basic Stanley Cup and Franchise modes, where you can take your favourite team through the season, with or without all the business of management and transfers. Reflecting events in the real-world NHL, you can also play with the new team, the Vegas Golden Nights, or create and draft your own 32nd NGL team, complete with European options for those who don’t want another U.S. or Canadian team. 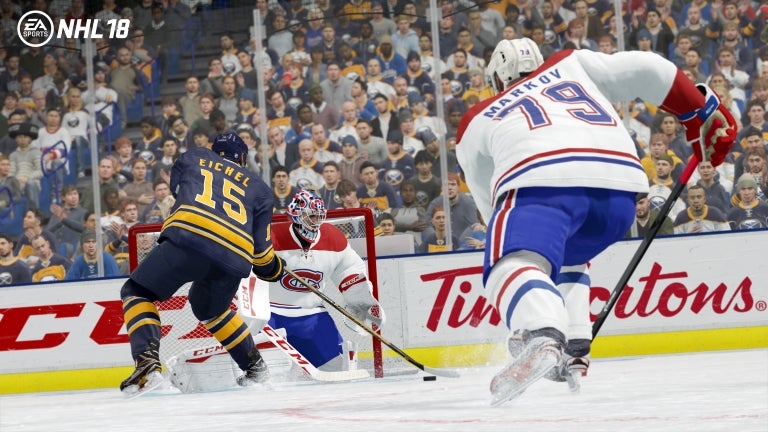 Meanwhile, the Be A Pro mode continues, and I’d argue that it’s actually more enjoyable here than it is in FIFA, thanks to the size of the rink and the sheer speed of movement, plus the way players are constantly switched in and out of action during the game. I’d still like to see something with a bit more drama, like NBA 2K16’s MyCareer mode or EA Sport’s own The Journey mode, but Be A Pro is still a fun and easy way to get into the action, where you can focus on your player’s objectives and try and think more tactically about how you play and prepare for each match.

For me the real star of NHL 18, however, is the all-new Threes mode. It’s an even faster-paced, more arcade-focused three-on-three game of hockey, playable online or offline, in co-op or competitive modes. With fewer bodies on the ice and more space to create plays and goals, this is NHL 18 at its most exciting. Rules on icing are relaxed and the face-offs that slow down the main game are practically non-existent. Threes mode even replaces the commentary with a more punchy, crowd-pleasing presentation, while leaving replays and stopping time out of the picture. Instantly enjoyable and stupidly addictive, it’s rapidly become my favourite way to play the game.

Surprisingly, it’s not some half-assed arcade mode, either. You can play it as a single-player campaign in its own right, starting as a fictional team in one of the NHL’s regional divisions, then steadily unlocking new teams, players and jerseys by defeating other teams. You can play it in a two-player co-op team against AI opponents – a near-ubiquitous feature across NHL 18’s many game modes – or go online. And when you do go online, Threes is a revelation. Because it’s so fast and so free of interruptions, it’s a brilliant multiplayer game, even when you’re stuck playing randoms from over the pond and trying desperately to keep your rating high. Prefer something more structured? Well, you can still play regular online versus matches, or get stuck into the now established Hockey Ultimate Team mode. Working much like FIFA’s Ultimate Team mode, it’s part collectible card game, part fantasy league, part arcade hockey sim, playable online against human opponents or offline in several series of single-player challenges. Frankly, with so much content on offer in NHL 18 I’ve barely had a chance to scratch the surface of HUT, and such modes tend to evolve over the course of the year, in any case. What’s clear, however, is EA Sports’ commitment to delivering an NHL that’s as deep as it is accessible.

Needless to say, it’s also beautifully presented. While NHL hasn’t yet followed FIFA and Madden onto the Frostbite engine, player likenesses and arenas still look impressive, with believable cloth dynamics and convincing rink surfaces. In terms of simulating a crowd with convincing individuals and believable reactions, NHL 18 is arguably ahead of both its stablemates, down to them waving custom signs for your self-built stars in the Be A Pro mode. The commentary could be improved – it’s not long before the same phrases start repeating – but it’s still quite effective if you’re not playing for hours at a time. As a bonus, NHL18 has a cracking rock and indie score, though again a few more tracks wouldn’t have gone amiss.

There are other holes you can pick in NHL 18. As in so many sports games, the AI is less than perfect, and you’ll still occasionally find yourself frustrated by teammates running into you and spoiling an attacking play, teammates who fluff easy passes and goalies who seem pitifully vulnerable to wrist shots. All in all, though, this is one of the best and most entertaining sports games of the moment, maybe not quite in the same league as NBA2K17 or PES 2017, but really close. Whether you’re an ice hockey fan or just looking for something different to PES and FIFA, it’s an easy game to recommend.

Like most US-centric sports games NHL has a reputation as an acquired taste, but really it shouldn’t be. It’s a thrilling, accessible sim of a thrilling, accessible sport, with the varied online and offline modes you’d expect from an EA Sports game, plus a real slap shot to the back of the net in the form of Threes. Bring on the Frostbite engine and an equivalent to FIFA’s Journey mode, and EA might have a classic sports game on its hands. As it is, it’s still absorbing and a lot of fun.