What is the NERF AccuStrike AlphaHawk?

AccuStrike is Hasbro’s newest series in the already extensive NERF blaster lineup. This isn’t just about a new colour scheme and design theme, though – it’s really more about the darts.

The AlphaHawk is basically a flashy re-skin of a venerable five-shot-cylinder spring-powered design, albeit a rather tasty sniper-style one. However, the AccuStrike ammo it comes with promises greater accuracy than standard NERF darts while still being compatible with all current Elite blasters.

Thankfully, Hasbro delivers on that promise.

I have a real soft spot for the AlphaHawk’s design. It’s like a sniper/target rifle from the future, but with more manageable proportions than a model such as the NERF Mega Centurion. 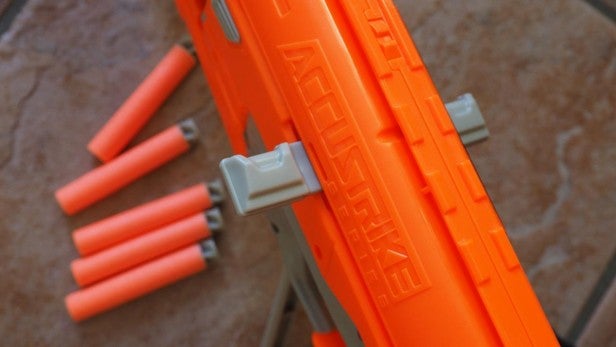 The AlphaHawk comes out of the box almost complete – the only assembly is to snap the plastic cocking bolts into either side of the action. They only go in one way around, so you’ll figure it out even if you haven’t read the instructions.

Considering it’s a rifle, the AlphaHawk is very light, but in a good way – even the littlest kids could carry it around all day. It feels very comfortable in the hands, too, with a grip that’s a decent size and shape for just about everyone, and a nicely shaped foregrip for your steadying hand.

Also, unlike many NERF models with a thumb-hole stock, the hole on this one is large enough that it doesn’t dig into your wrist as you swing the blaster around. 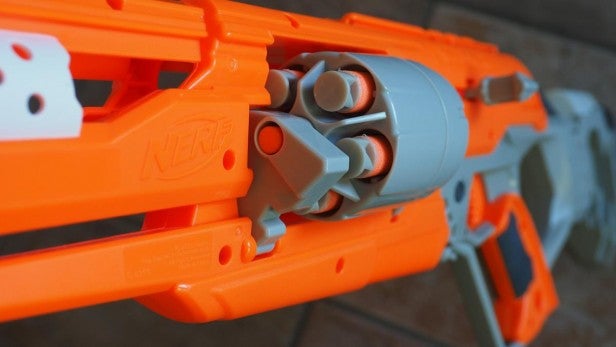 The AlphaHawk takes five darts in its revolving cylinder, which is a swing-out design like the one on the ever-popular Elite Strongarm. There’s a button on the left-hand side of the blaster that you press in and then you can push the cylinder out from the other side.

A nice touch is that Hasbro supplies 10 darts with the AlphaHawk, not five. Normally all you get is enough to load the blaster once.

The ‘barrel’ is quite unusual, in that it doesn’t make any pretence at being an actual barrel – it’s very wide open at the sides, more like some kind of shroud. This doesn’t make any difference to performance, though, since a proper barrel on a NERF blaster would just add friction, reducing range and power.

At the very end of this non-barrel is an open sight. There isn’t a corresponding rear sight, but you can use the top accessory rail to align left/right, and elevation is so dependent on the distance to target with NERF darts that sights aren’t that useful anyway.

Talking of accessory rails, there’s that one on the top rear, and a shorter one on the bottom at the very front. Perfectly set up for a scope up top and a bi-pod down below, eh?

Right, so let’s move on to what’s special about those AccuStrike darts. They have the same tubular foam body, but the rubber tip has been redesigned to have vanes like a turbine. These presumably make the dart spin a little as it flies, helping it achieve greater accuracy.

AccuStrike ammo can be bought separately for use in any modern NERF Elite blaster, with packs of 24 costing £7.99/$9.99. 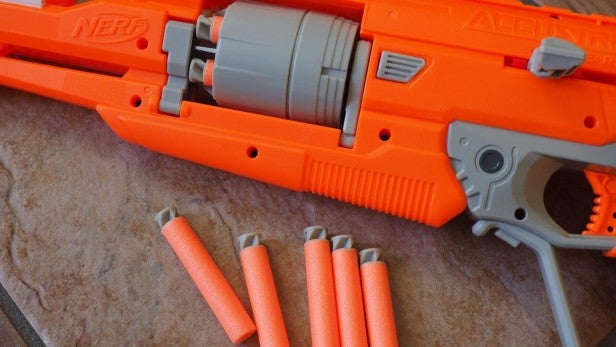 Some people love swing-out cylinders and some hate them, but they don’t bother me either way. Once you get used to them, that whole reloading process becomes natural. Just press the release button, push the cylinder from the right side so that it swings out on the left, and push your darts into the chambers from the front.

Once you have five darts loaded, push the cylinder back in and pull back on either of the cocking bolts to prime the blaster. You just need to pull the bolt back and let go; a spring returns it forwards again.

Pull the trigger and an AccuStrike dart flies out straight and true. What sets the AccuStrike ammo apart from standard NERF darts is that they do that consistently. You can actually group shots just inches apart from 20ft away, and with much less chance of a random ‘flyer’. They’re a big improvement on the standard darts – although still not quite as accurate as the golf-ball-shaped NERF Rival rounds, and with a less flat trajectory.

I was a little worried about the durability of those tip mouldings, but to be fair I’ve pinged them all around the house and out in the garden, hundreds of times, and the tips still look as good as new.

However, I did discover that the AccuStrike darts don’t actually work with all NERFs. I tried them in a Stryfe, HyperFire, Tri-Strike and a Jolt and they worked perfectly. However, they didn’t play nice at all with the Zombie Strike Outbreaker Bow, Doominator or Doomlands Vagabond. 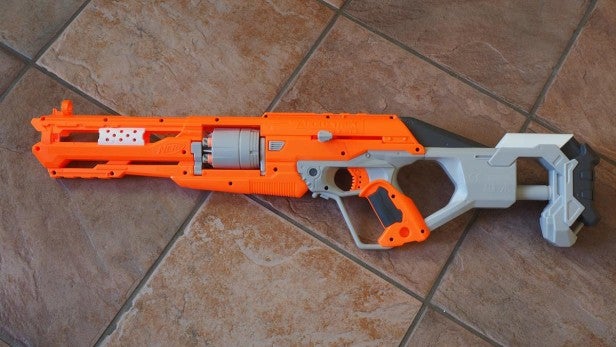 Should I buy the NERF AccuStrike AlphaHawk?

Look at the AlphaHawk as just any other NERF blaster and it doesn’t look terribly good value; it’s just a five-shot springer with a fancy-looking body. It does look really nice, though, and it’s great to hold, as well as being light. The ten AccuStrike darts – which perform so much better than standard NERF darts – do help to level things out a bit, but not quite enough to justify the high RRP.

If you like the looks of the AlphaHawk, it might just be worth that price premium – assuming you can’t find a good deal on one. Otherwise, invest in a few packs of AccuStrike darts and one of the better-value blasters that’s capable of firing them.

A cool spring-powered blaster that’s made super-accurate thanks to the AccuStrike ammo – but it costs a little more than it should.