What is the NERF Zombie Strike Outbreaker Bow?

The Outbreaker Bow is the latest dart-lobber to hit NERF’s quirky Zombie Strike range. It looks like a compact crossbow, but at heart it’s a simple five-shot cylinder blaster.

When the pretend-zombie hordes are a-coming, this might not be the ideal weapon with which to fend them off, but it certainly has plenty of charm.

Removing the Outbreaker Bow from its box, you might think this is a simple cylinder pistol, like the Elite Disruptor, except with the usual Zombie Strike design treatment. And it pretty much is, but it becomes more visually distinctive with the addition of the bow arms which give it that crossbow styling. 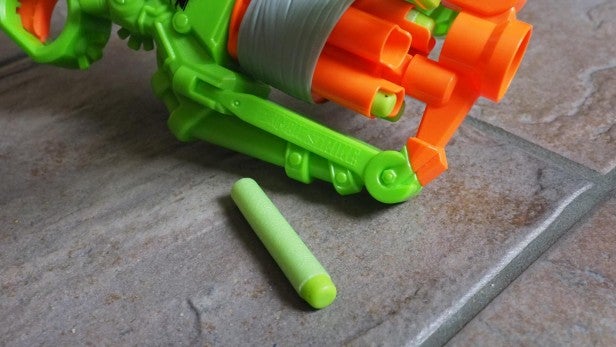 The rotating cylinder is five-shot and takes the standard Elite-style NERF darts. It’s cocked by way of a pull-back primer that’s shaped like a pair of scissors. That’s all part of the whole Zombie Strike thing – each blaster is meant to look like a DIY concoction cooked up in a zombie-besieged refuge. Walking Dead chic, if you will.

To that end, the grip is shaped like a pair of pliers, the cylinder’s wrapped in faux duct tape, and there are moulded plastic wing nuts poking out here and there.

For some strange reason – possibly just to balance things visually – NERF has added a mini-stock protruding behind the grip. It’s really too small to serve any practical purpose as a stock, but it can serve as a useful carry handle on occasion. I could’ve lived without it.

The bow part is in one moulded piece with an elasticated string tied between each end, and it clips into the top front of the blaster, just ahead of the single accessory rail. The string then just needs hooking over the priming handle and that’s all the assembly done. 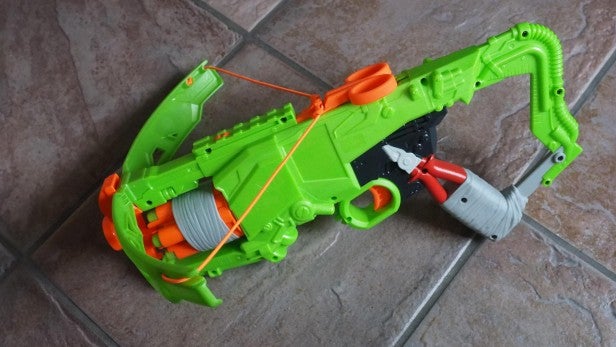 Ah, but this isn’t a blaster powered by its elastic bow string like the Elite Crossbolt is; it’s a common spring-powered model. And that means that the bow arms are essentially optional.

As I’ve said, the Outbreaker Bow is, at heart, a standard spring-powered cylinder blaster. So you load it simply by popping each of the five supplied darts into the front of the cylinder, then prime it by pulling back the scissor-shaped cocking handle. Squeeze the trigger and away a dart goes.

Range and accuracy are pretty standard for a spring-equipped NERF blaster. If you’ve used a Strongarm or any of its derivatives, you’ll know what to expect. 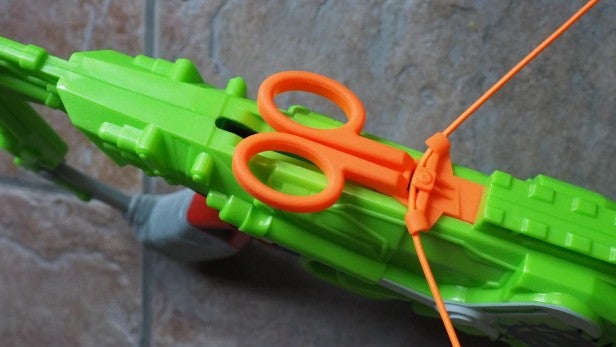 The Outbreaker Bow does fundamentally support slam-fire – meaning you can hold the trigger in and repeatedly prime the blaster for rapid firing – but the odd priming handle means it’s not really practical with this blaster. Those fake scissors are generally a bit fiddly for smaller fingers, too.

I also found the pliers-styled grip to be uncomfortable. It looks cool, but it’s too narrow at the top, and that pointless mini-stock can bash into your forearm when you’re trying to aim a bit freestyle.

Removing the bow arms generally makes the whole package a bit less cumbersome, but then you might as well have saved some money and bought a more basic cylinder pistol. 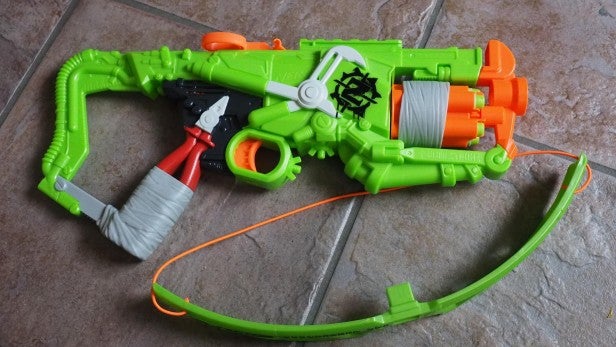 Should I buy the NERF Zombie Strike Outbreaker Bow?

The Outbreaker Bow is another fun addition to the NERF range – but aside from the cool zombiepocalyse styling, there’s no real reason to buy this ahead of almost any other cylinder-based blaster.

The venerable Elite Strongarm and the newer Elite Disruptor are both cheaper and offer six-shot cylinders, as well as the additional benefit of effective slam-fire for rapid firing. If you’re after something that looks a little more outlandish, the Zombie Strike range also contains the Flipfury, which has a pair of six-shot cylinders and a more compact form for around the same price.

If it’s the crossbow thing that floats your boat, you’d be better off tracking down an Elite Crossbolt, which actually uses the string for firing, is more comfortable to use, and has a 12-shot magazine.

Fun and funky, but not the best-value cylinder blaster in NERF’s arsenal.