What is the NERF Elite Hyperfire?

The Hyperfire is the fastest-firing NERF gun yet. Thanks to a battery-powered motordrive and a 25-shot drum magazine, it can spit out up to five foam darts per second. If 1920s gangsters owned NERF blasters, they’d all be hiding Hyperfires in their violin cases. 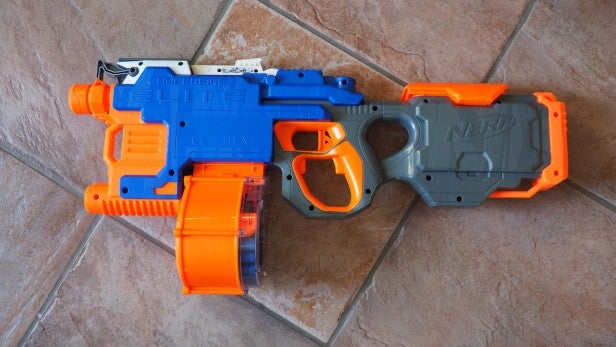 The Elite Hyperfire doesn’t require any assembly – only the insertion of four D-type batteries, which slot into the stock, under a door secured by two crosshead screws. So the only things in the box are the gun, the drum mag and a pack of 25 Elite darts.

The design of the blaster is chunky and stubby, further enhancing the feeling of wielding a futuristic Thompson drum-fed submachine gun.

Bringing it out of the Prohibition era is a thumbhole stock, an accessory rail above the barrel, and a substantial hand grip below it. Oh, and that it’s mostly blue and orange plastic.

Just behind the accessory rail is a hatch secured with a slide catch, which is for dealing with potential jams. The hatch doesn’t open too wide, however, so it’s not as helpful as it could be. Thankfully I haven’t had many jams. 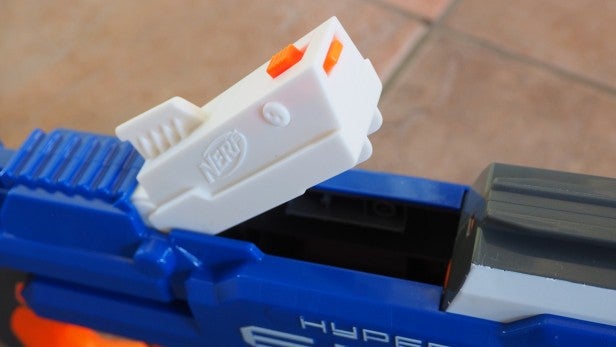 There’s no loading bolt or pump here – those four D-cells mean the Hyperfire is fully automatic. Hasbro claims it can manage up to five shots per second on fresh batteries, and has a maximum range of 27m.

Loading the magazine is done in the usual NERF manner of, well, just pushing each dart into the top of the mag in the right direction (as indicated by an arrow on the side). Once that’s done and the batteries are in place, all you need to do is slap the magazine into the slot in the underside of the gun and you’re ready for rapid fire. 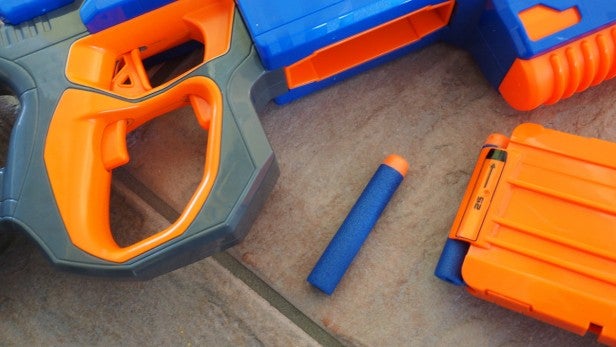 You don’t just pull the trigger to start popping darts, though. There’s a secondary trigger you have to hold in with your middle finger, which gets the motor spinning up – then you can squeeze the main trigger to set the foam a-flying.

And woah! This thing is super-fun. The Elite darts ping out at a steady pace, with a decent amount of accuracy. I managed a spread of around 20 inches at 20ft from fresh batteries. Distance is quite impressive and plenty good enough for an ammo-sprayer like this. It did manage the claimed 27m range, but with wild inconstency and with no accuracy whatsoever out to that distance.

The handling is also excellent, in part thanks to the batteries pulling weight back towards the shoulder and balancing things out.

But the rate of fire has a drawback: you’ll be out of ammo before you know it. A 25-dart mag seems generous until you’re zipping them out at 4-5 shots per second. Still, it’s one of NERF’s standard items, so you can always buy a few other mags to back it up – and swapping them out is quick and easy enough. Just press the button in front of the trigger while pulling the drum down, and it drops out with very little resistance, so it won’t be a problem even for younger kids. 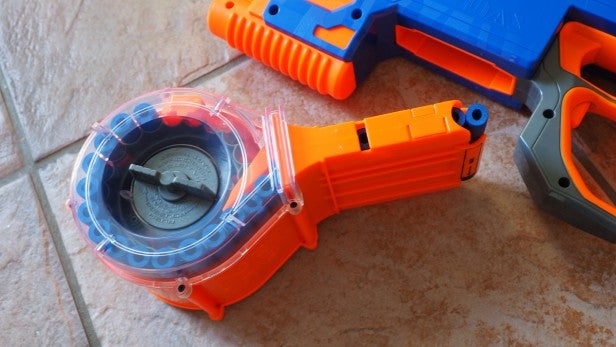 One other slight downside to this battery-powered blaster is the whirr of the motor and flywheel. If you’re trying to be at all stealthy, that goes out the window when you spin the Hyperfire up – your foe may have a split second’s warning before the darts rain down. Not that it’s terribly noisy; it’s just not silent.

Also, the use of D-type batteries is a double-edged sword. On the one hand, they last ages – I’ve had at least half a dozen lengthy NERF wars with my kids without needing to change them – but on the other hand, they’re not the type of batteries you just have lying around in a drawer. When AAs need replacing, there are usually some in the house, but the kids are going to be a bit more upset when you tell them they’ll have to wait until the weekend when you’re next somewhere with a stock of D cells. 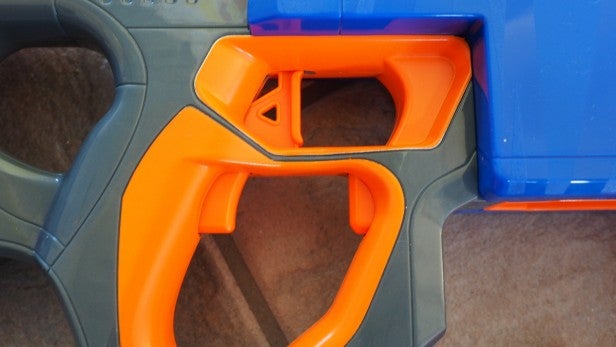 Should I buy the NERF Elite Hyperfire?

If you’re into NERF warfare of the less subtle persuasion, the Hyperfire is a suitably unsubtle beast that offers a ton of fun. It spits out foam darts faster than any NERF blaster before it, and is a joy to handle.

Just be wary that you’ll empty the mag quicker than you expect, so you’ll probably want to budget for a spare mag or two – assuming you don’t already have any standard NERF clips in your arsenal. You’ll also need to stock up on expensive D batteries.

However, the Hyperfire doesn’t initially cost as much as you might expect, considering it’s the fastest-firing NERF yet – and the foam-fizzing fun it promises will make that extra expense seem worthwhile.

For NERF battles of the fast-and-furious kind, there’s nothing better.