What is the NERF Modulus Tri-Strike?

The Tri-Strike is a modular NERF blaster that, as you can probably guess from the name, is made up of three core components. A manually operated, magazine-fed dart gun forms the fairly basic heart, while a foam-missile launcher and four-shot Mega-dart attachment can also be bolted on.

But is there any real point to offering this pick’n’mixability? Actually, it does offer one excellent benefit – the Missile launcher can be used as a standalone one-shot item, so you’re getting a sort of buy-one-get-one-free offer. There are also optional upgrades available that will satisfy the toy-gun tinkerers.

The Modulus Tri-Strike is intended for anyone aged eight and above. 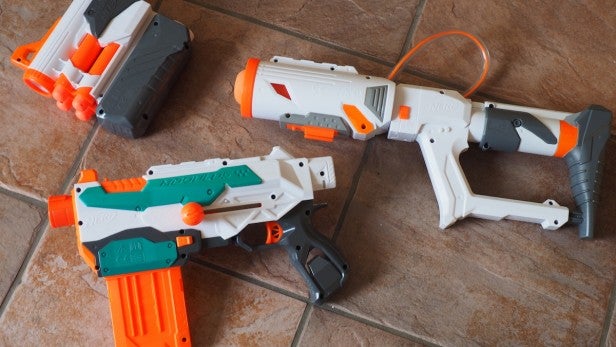 The Tri-Strike comes in a box with all the elements separated, to emphasise the modular aspect of the design. There’s that core blaster, its 10-shot magazine (for standard NERF darts), the four-shot Mega-dart extension, the Missile launcher, 10 Elite darts, four Mega darts, and one Missile.

The only bit of assembly that’s absolutely necessary is to fit the firing bolt for the core gun. Well, and to slap in the magazine when it’s been loaded up. Fitting the two-part bolt is a simple matter of pushing the part with the metal bar through a hole in the gun and then attaching the other part to the other end of it. Boom, you’re ready to shoot with the standard NERF darts.

Fitting the pump-action attachment for Mega darts to the front of the blaster is a case of aligning it correctly with the bayonet fixing on the blaster’s barrel, pushing the two together, then twisting to secure. 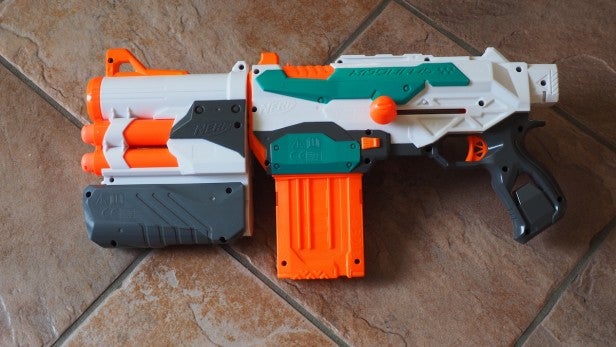 The Missile launcher is only slightly more complicated, as it’s in two pieces joined together by a flexible air hose. The barrel part slides onto the accessory rail on top of the blaster, then the launcher clicks onto the rear of the blaster to double as a shoulder stock. It’s all nice and neat, but it’s also more fiddly to remove than to fit.

A really cool touch is that the two parts of the Missile launcher can be joined together to form a weapon all by itself. Sadly the same can’t be done with the Mega-dart attachment, which is a little awkward to hold on its own. 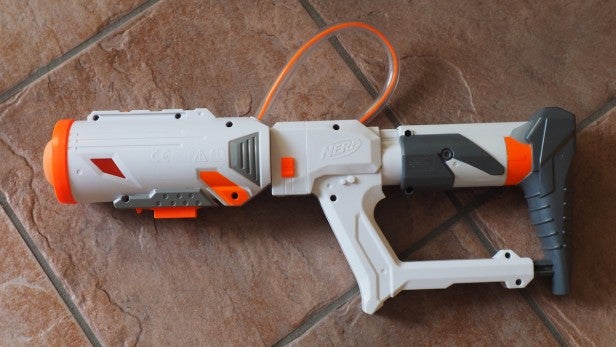 As usual with NERF kit, the Tri-Strike is almost entirely plastic, but feels sturdy enough. The colour scheme’s definitely more on the kiddy side than those of many models from the NERF Rival, Elite and Mega series.

There’s a slide-back hatch on the top for clearing jams, although it’s a little small and gets obstructed a bit if the Missile launcher’s fitted. With a nice, positive cocking action, however, you shouldn’t get too many jams.

Optional accessories in the Modulus range include a telescopic sight and a red-dot sight, amongst other things. Be aware, though, that not all the add-ons will be suitable for the Tri-Strike, as it only has an accessory rail on the top, not under the barrel. One you should definitely consider is the Flip Clip (£13.99), which provides a pair of 12-dart magazines back to back – fire off a dozen, eject the mag and reverse it for another 12 shots.

All three of the Tri-Strike’s elements are manually operated, so that means no batteries, no extra expense, and no end to the fun. Of course, it also means there’s no automatic firing.

The basic blaster is cocked by sliding the loading bolt back and then forward again, which compresses the spring and slides an Elite dart up from the magazine. The bolt protrudes from both sides, so it’s fine whether you’re left- or right-handed. Then just pull the trigger to fire.

It’s easy enough to fill the 10-shot magazine with standard darts and slap it up into the gun, but ejecting the clip for a reload may be a little tricky for smaller kids. You have to push little catches across on both sides of the blaster while tugging the magazine down quite hard – that’s a lot to ask of tiny hands. 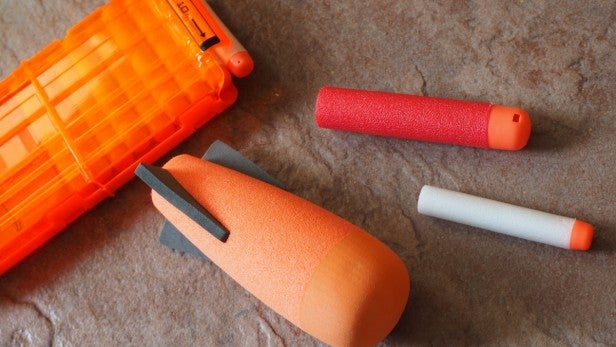 Firing the Missile launcher is achieved by pulling the most rearward part of the stock back – something that requires quite an effort – and quickly pumping it forward again. Done with enough force, this produces a satisfying pop and the meaty NERF Missile arcs through the air.

Even if you’ve fitted the Mega-dart attachment, which has an integrated extension for the core blaster’s barrel, the achievable range and accuracy when using the standard-size Elite darts is slightly above average by NERF standards. It provides a solid foundation for the whole ensemble. I tended to get at least a couple of feet of extra distance over the battery-powered Elite Hyperfire, for instance.

By holding the trigger in and shuttling the priming handle back and forth – what Hasbro calls “Slam Fire” – you can even get some rapid firing going on.

Firing the Mega darts themselves is also great fun – not just because of the pump action of the launcher, but because they make a great whistling noise if you send them hurtling with enough speed. Sure, they’re not particularly accurate and there’s the occasional dud shot that plops short, but not usually more than one out of the four. 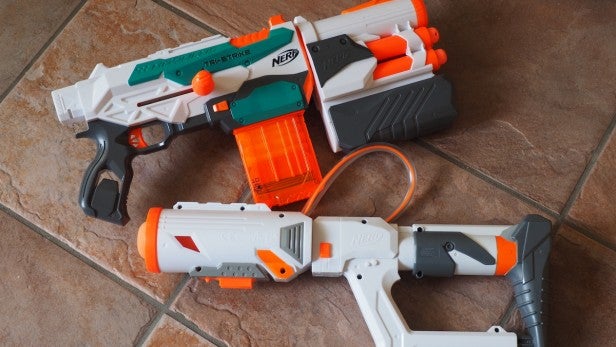 Should I buy the NERF Modulus Tri-Strike?

The Tri-Strike offers plenty of foam-dart-popping fun. The novelty of having three separate projectile types at your disposal adds a surprising degree of appeal, and the option to use the Missile launcher as a standalone weapon in your arsenal makes the whole package seem better value. It’s a shame there’s only one Missile provided, though, and it seems refill packs are scarce.

Because the Mega attachment and Missile launcher use standard NERF fittings, there’s also plenty of mixing-and-matching potential – you could always relegate the core Tri-Strike spring blaster to a back-up weapon and bolt the other parts onto a semi-auto Elite Stryfe, for instance.

For younger NERF fans, some of the Tri-Strike’s mechanisms may be a little too stiff or fiddly, but more experienced gunslingers will find plenty to like here.

Triple the firepower really does mean three times the fun.