What is the NERF Zombie Strike Doominator?

The biggest blaster in NERF’s Zombie Strike arsenal is also the wackiest by far. The pump-action Doominator has four six-shot cylinders mounted on a single central cylinder, making for an impressive 24-dart capacity.

In name, appearance and mechanics, the Doominator is a whole heap of crazy. 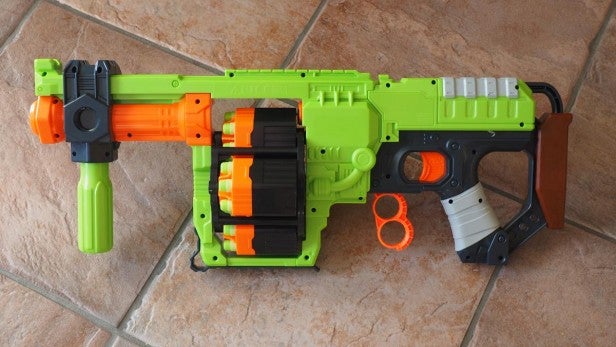 The design of the Zombie Strike blasters riffs on that whole zombiepocalypse-survival scenario. They’re predominantly a funky green colour, but with moulded details meant to look like workshop spares from which these DIY weapons have been thrown together. I’m a fan, to be honest.

The Doominator is a spring-powered blaster that requires a little assembly before you can get poppin’ darts at the zombie horde. Two of the four cylinders are already attached, but the others need to be clicked into place.

Then you have to screw in the priming grip for the pump action, which, in that Zombie Strike style, looks like the handle of a screwdriver. A nice touch is that there’s a choice of three mounting positions: you can bolt it sticking straight down, out of the left side or out of the right.

And that’s it – all ready to load. 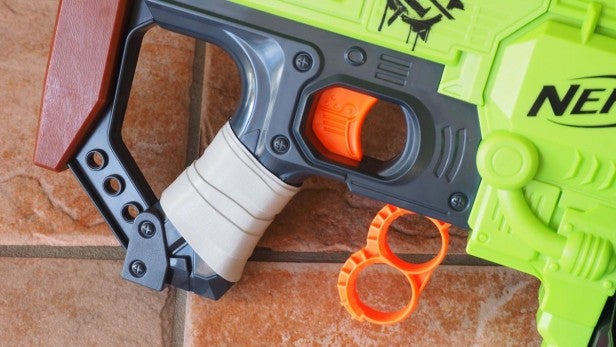 On the whole, this is mostly a comfortable blaster to hold. It’s nicely balanced and stubby, so it’s easy to swing from target to target. The grip is a decent size and has that standard Zombie Strike feature of being made to look like it’s wrapped with duct tape. There’s a rather weird thumb hole mini-stock, though, which is too short to actually use as a stock and just juts into your wrist if you’re moving around a lot.

In front of the grip and trigger is a knuckleduster-style lever, which is how you switch between cylinders. Squeeze off six darts to empty one cylinder, and then reach forward with your middle and ring fingers to pull the lever and spin onto the next cylinder. It happens with a really satisfying clunk, too.

The Doominator has just a single accessory rail on top, but that’s probably all you’ll need, unless you desperately need to use both a red-dot sight and a lamp. 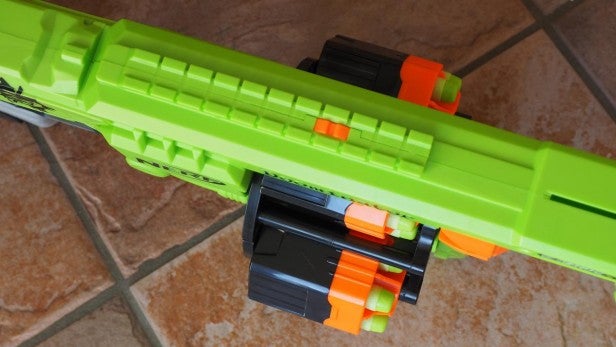 Loading the Doominator is simple enough. Like all of NERF’s revolvers, just push the darts into the front of each cylinder – although in this case you’ll need to pull that knuckleduster lever to get to all of them.

Pulling back and forth on the priming handle cocks the spring, ready for firing. Personally, with the handle mounted straight down, I found my thumb bashed into the frame around the cylinders, so I needed to screw the handle into the left side instead. My son didn’t have that problem, although even his little thumb got quite close. Just an extra half-inch of clearance would have made all the difference. 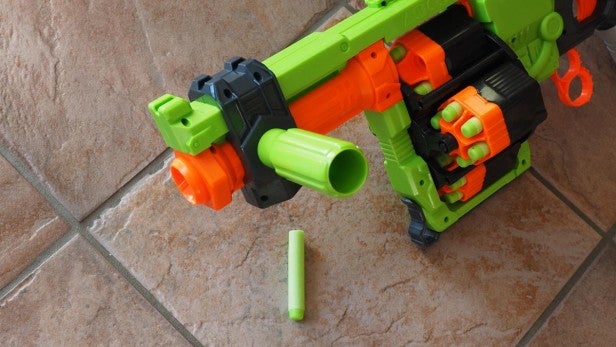 In terms of performance the Doominator proved the equal of any other spring-powered NERF dart-firer I’ve used. Don’t expect pinpoint accuracy, but hitting a slow-moving zombie at 25ft shouldn’t be a problem.

This is simply a super-fun blaster. Popping off six shots and then thunking onto the next cylinder is incredibly satisfying, and the handling is great, too – aside from that silly mini-stock.

Should I buy the NERF Zombie Strike Doominator?

For the money, the Doominator is a great blaster. You get excellent 24-shot capacity and a nicely balanced weapon that’s perfect in a close-quarters firefight.

Throw in the extremely cool, bonkers design and you have a unique, compelling addition to the NERF arsenal.

The wacky design isn’t the only thing that’s great about this funky foam-flinger.