My Hero One’s Justice is a competent brawler that makes effective use of its source material to craft something fans will most likely adore.

My Hero Academia has cemented itself as a Japanese juggernaut in recent years. Based in a world where the majority of its population are born with superpowers known as ‘Quirks’, the anime/manga series has become a phenomenon in and outside of Japan thanks to its sharp aesthetic, relatable characters and infectious drive of reminding people that everyone is capable of being a hero.

Having just wrapped its third season and received a film adaptation, it was only a matter of time until My Hero Academia slipped into the realm of gaming. Continuing the trend of inexplicably not having the show’s name in the title, My Hero One’s Justice is a bombastic brawler that remains faithful to its source material, while delivering a fighting experience that is satisfyingly accessible.

It sadly doesn’t add to the mythos in any meaningful way, but will ultimately provide fans with oodles of showdowns they can relive from the show, or envision conflicts never previously thought possible. 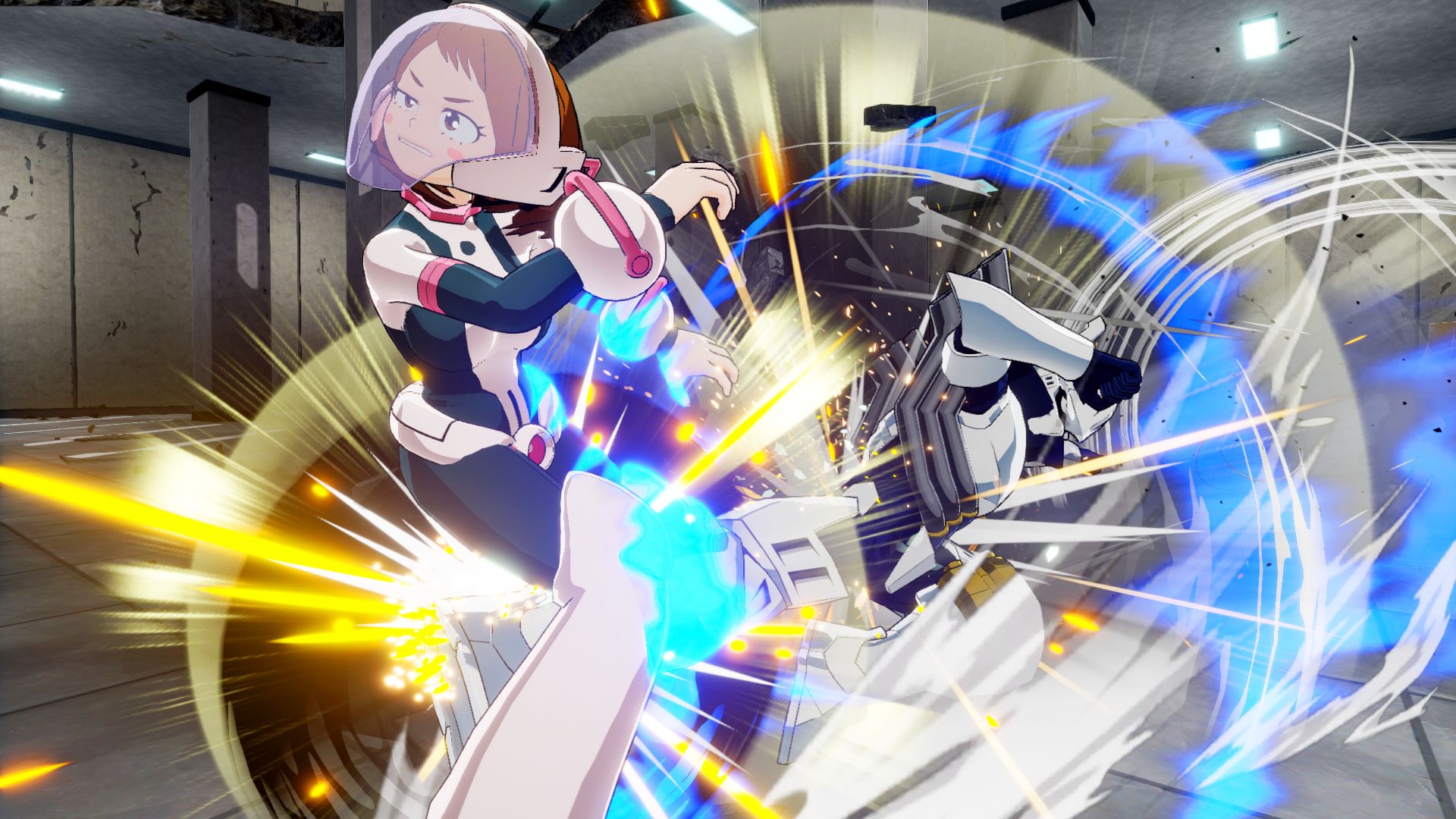 Those familiar with the series will be happy to see that the roster is very generous, chronicling most of the faces you’d expect. There’s Midoriya Izuku, Ochako Uraraka, and All Might, otherwise known as the John Cena of anime.

It’s a joy teaming up your favourite students against a ragtag group of villains, especially since the 3v3 combat system allows for some creative team combinations. Mina Ashido being absent is a crime, though. But I wouldn’t be surprised if she, among others, showed up as downloadable content.

You control one central character alongside two supports, which can be called in to assault the enemy with a touch of the shoulder buttons. One can throw foes into the air for a vulnerable strike, while the other will bask them in a shower of scorching flame.

Experimenting with different loadouts is frequently rewarding, which is good since the core combat isn’t especially deep. It’s accessible, but there’s only a handful of combos to be learned with each new character.

Most moves in each hero’s arsenal are pulled directly from the show, acting as physical manifestations of fan service as ultimate abilities are said aloud in typical anime style. If you don’t think ‘United States of Smash’ is the coolest sounding thing ever, I don’t know what to tell you. It’s a shame that this lack of depth becomes evident quite quickly, especially once you dive into the robust story mode. It isn’t anime if the main characters are screaming their special moves.

My Hero One’s Justice has a dedicated solo campaign, although it focuses on retelling events from the established canon instead of branching out in new directions.

Commencing in the middle of the second season, I can’t deny that taking control of heroes through fondly remembered encounters isn’t a blast. But after a few hours, it descends into spamming combos you’ve long grown familiar with. You charge through a relentless gauntlet of fights that seldom let up, many of which have you duking it out with the same faces over and over again.

It’s consistent with the story that’s being retold, but when having to play through them yourself, it can feel somewhat tedious. However, I adore the cutscenes, many of which incorporate new elements in ways I didn’t expect. But now, I’m one of those people who moans when characters aren’t wearing the right outfits when they should be.

Fights themselves look wonderful as you pummel through three-dimensional stages. Plus, they’re all destructible, embracing all manners of verticality as opponents are socked into the air with an endless flurry of punches. Executing the right combo will leave enemies cemented into the nearest floor or wall, opening them up for a perfect attack.

Finally, we have Plus Ultra. Not only a My Hero Academia catchphrase, but it’s also the name of super moves in My Hero’s One Justice. Available in three tiers, you’ll build up the power of each one when taking and receiving damage. When they land, special attacks are positively devastating. Frustratingly, the window of attack is frequently unclear, meaning it’s easy to misjudge your position and waste the entire thing.

When executed correctly you can end rounds in a matter of seconds, and they look equally spectacular. So it’s even more irritating that missing and opening yourself up for a bombardment as a result happens so often. I eventually nailed it – but it just doesn’t feel as intuitive as it could. 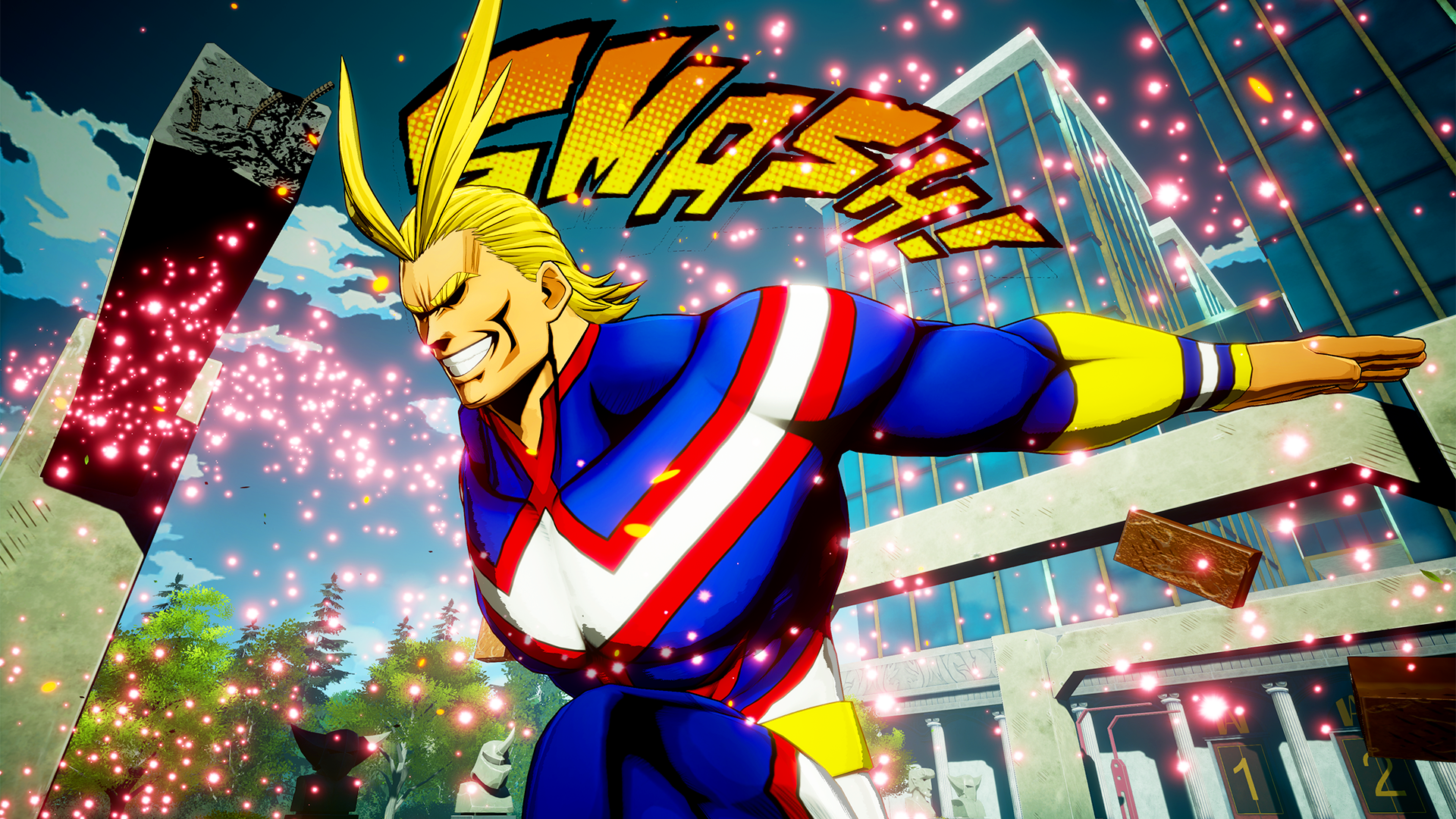 Outside of the main campaign and battling against friends in local multiplayer mode, you can also partake in a small selection of missions. Consisting of several fights with unique win conditions, you’ll need to fight specific characters while levelling up your favourite fighters. You’ll find most of My Hero One Justice’s challenge here, even if difficulty spikes do emerge from time to time.

Don’t get too excited, though. Objectives aren’t the most creative and often devolve into completing battles within a time limit. While it forces you to prioritise accurate move execution, it also helps to highlight some of the aforementioned inaccuracies. It’s far, far too easy to find yourself stun-locked with no reasonable means of escape.

All of these little niggles prevent My Hero One’s Justice from feeling as a good as it could be. The truly marvelous anime fighter is here, but tragically lies buried under some unusual design decisions and a noticeable lack of finesse in some areas.

It’s still great fun, though, and is easy to recommend for any fan of the series, particularly when you bring up the ludicrous character customisation. 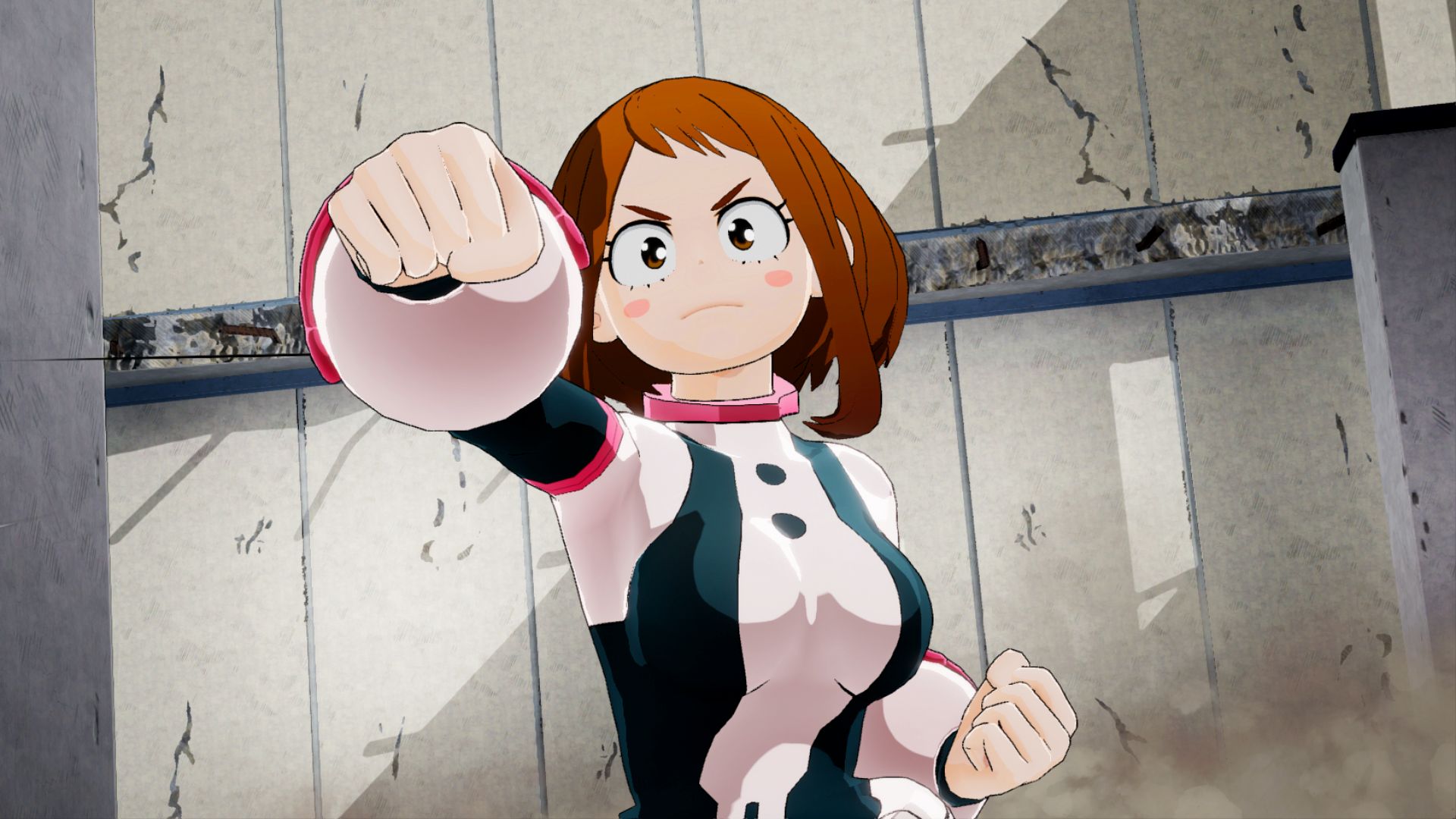 We’ve no shame in saying we main Ochako.

The number of costumes, voice lines and random trinkets that each playable character can be equipped with is, quite honestly, a bit absurd. Random attachments are unlocked by performing well in missions and the campaign, many of which can be assigned to any hero of your choosing.

You also have a variety of costumes, although many of them are simple recolours instead of bespoke styles for each hero. It would’ve been amazing for the likes of Tsuyu and Bakugo to don outfits pumped with the same amount of effort as Blizzard’s Overwatch, but it’s simply not the case. Despite this, the progression system here is hugely rewarding and kept me playing for hours.

My Hero One’s Justice is a competent brawler that makes effective use of its source material to craft something fans will most likely adore.

It’s bright, colourful and enjoyable in the way it retreads the beloved narrative and puts us in the shoes of heroes and villains to live out an unparalleled power fantasy. It’s not without its flaws, and there are many, but the ease at which you can pick up a controller and get lost in the game is worthy of praise.