What is the Moto X Force?

Sitting at the top of Motorola’s 2015 line-up, ahead of the Moto X Play and Moto X Style, the Moto X Force has one stand-out feature – a display that shouldn’t crack, shatter or break if you drop it.

When phones are seemingly becoming more delicate, a handset that is able to handle greater wear and tear should appeal to many people.

While it isn’t perfect, the Moto X Force ends and pretty decent year from Motorola. It’s powerful, rugged and has a seriously impressive battery. If you’re a clumsy person, this could be the phone for you.

We put the Moto X Force through it paces, can it withstand the drop test? Check out the video below and see

Normally I’d kick off a review talking about the build and design of a phone, but with the Moto X Force it’s really the display that draws the eye.

It’s not interesting because of its 5.4-inch quad-HD resolution – that’s nice to see, though pretty much run of the mill with flagship devices in 2015 – but down to the “unique” tech and the method by which the display is put together.

In an effort to make the Moto X Force its most durable phone to date, Motorola is using something called ShatterShield technology. It’s basically a five-layer system that protects the actual 2,560 x 1,440 panel, so if you knock if off a table onto the concrete floor below, it should survive.

I’m happy to report that it actually works, really well. I dropped the phone more than 50 times in a bid to smash the phone – there’s a video above to prove it – but failed miserably; the panel still works perfectly. An iPhone 6S, Samsung Galaxy S6 or Nexus 6P put through even a couple of drops would leave you with a seriously cracked device. While the Moto X Force’s display didn’t shatter, it did pick up a few scratches. That’s pretty impressive, but it isn’t perfect.

Now, it does seem that having all this protection takes something away from the overall quality of the screen.

Firstly, there’s a noticeable gap between the outer-layer – a built-in screen protector of sorts – and the display. This is especially noticeable when you put it side by side with a handset featuring a laminated display, such as the iPhone 6S.

This gap can sometimes make things on the display look a little blurry, especially under bright lights, and outdoor use is hampered by just how reflective the screen is.

Nevertheless, if you’ve had to replace one too many phones as a result of drops and shattered displays then I’d seriously recommend taking a look at the Moto X Force.

Instead of playing up to this “durable” nature with swathes of thick plastic and ruggedised corners, the Moto X Force is actually a pretty well-designed handset.

The metal rims flow smoothly into the slightly curved back panel, which is constructed from a grippy fabric. If you want something a little classier, there’s a pebbled leather version on offer too. 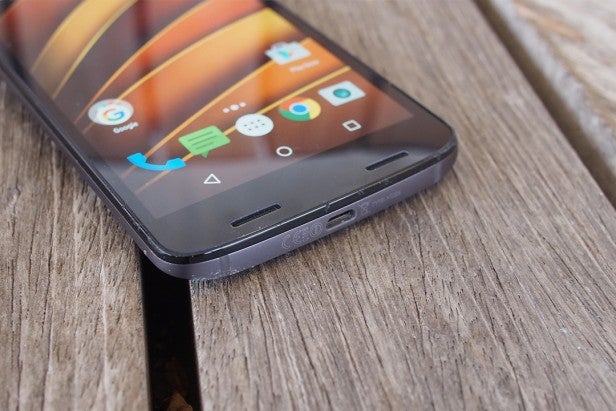 However, note that no matter how resistant the screen is to cracking and shattering, the phone’s bezel isn’t quite in the same league. It remains better than probably every other handset at resisting scratches, but it’s not a miracle worker.

On the rear of the phone you’ll find the now iconic Motorola dimple positioned below a circular flash and camera sensor. I’d still like the dimple to be a little larger, more like it was on the 2014 Moto X, so my finger can actually rest in it – but it remains a design trait I’m fully onboard with.

Considering the Moto X Force has a 5.4-inch display – small by today’s standards – it’s far from a small phone. In fact, it’s wider, thicker and feels heavier than the 5.7-inch Nexus 6P. It’s a squat phone, and in many ways more difficult to hold than larger devices as a result of its proportions. There are large bezels surrounding the display and it doesn’t even benefit from dual front-facing speakers; only a single one on the bottom.

The Moto X Force is far from the best-looking phone available now, but that’s something I can live with simply because it manages to be so tough to break.