What is the Moto X Play?

The Moto X Play is the Motorola’s latest mid-range device, offering up more power and a better display than the cheaper Moto G – a phone we love – but at a price that is lighter on the wallet than the incoming Moto X Style.

At £279 for the 16GB version, or £319 for the 32GB Moto X, there’s certainly a lot to like here. It continues Motorola’s stripped back approach to Android, ditching ugly skins for a clean, stock version of Android Lollipop with a flurry of tweaks that actually make it better.

But, it really has two main selling points – the huge battery that Moto claims should last you through two days, and a 21-megapixel camera. Having these two killer features on a mid-range smartphone could really help the Moto X Play stand out against an ever-increasing budget smartphone crowd that includes the hard to buy OnePlus X and Wileyfox Storm. 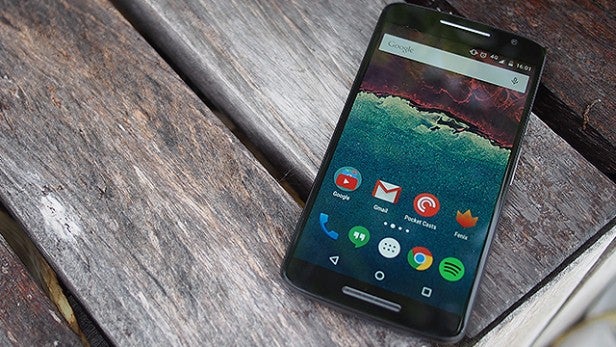 If you’ve laid eyes on any of Motorola’s devices from the past two years, then you’ll instantly recognise the Moto X Play. The front is as simple and clean as you can get, a near edge-to-edge 5.5-inch display is flanked by a front facing speaker (on the bottom) and a speakerphone (on the top) plus a camera. There are no ugly brand logos, which is always a bonus.

While the high-end Motorola phones, notably last year’s Moto X and the upcoming Moto X Style, have a metal rim and a multitude of leather and wood backs, the Moto X Play keeps things simple. The trim is plastic, it’s pretty much the same as the Moto G, as are the volume rocker and sleep/wake button. It’s the little touches that have always made me like the Moto line, the slightly bevelled standby button for instance ensures you don’t accidentally hit the volume button. Something I did, and still do, whenever I pick up the HTC One M9.

On the top you’ll find the headphone jack bang in the centre with the sim tray and microSD slot next to it. While I’d rather the jack was on the bottom of the Moto X Play, like it is on the iPhone 6 and Samsung Galaxy S6, this is only a minor quibble, 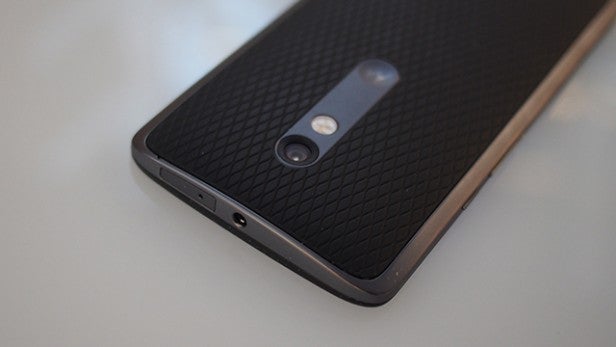 Motorola hasn’t completely ditched its Moto Maker customisation tools for the Moto X Play, but the options are limited to choosing between a black and white front, a variety of brightly coloured back-panels and eight different accent trims. My review unit is all black, with a silver accent rounding the camera and the trademark Motorola dimple. The dimple itself isn’t quite as pronounced as on previous models, but it’s still a nice place to rest your finger.

The back-panels are replaceable, so if you pick up a vivid pink one and instantly feel slightly self-conscious about flashing it in public you can always pair it with something slightly more conservative, a dark blue or slate, for instance. They pop off easily and feel sturdy, much more so than similar panels from LG and Samsung. While the rubberised, plastic back lacks the premium finish, it certainly is durable. I doubt it will easily pick up any scratches or dings, and I must admit that I have dropped the phone on a couple of occasions already with absolutely no lasting damage.

For the Moto G, Motorola tightened everything up and gave it an IPX7 rating so you could drop it in depths of up to one meter of water for 30-minutes without seeing any lasting damage. This feature hasn’t been carried over the Moto X Play, but the IP57 rating does mean taking it out in the pouring rain or accidentally spilling a glass of water over it won’t cause it to break down and need replacing. 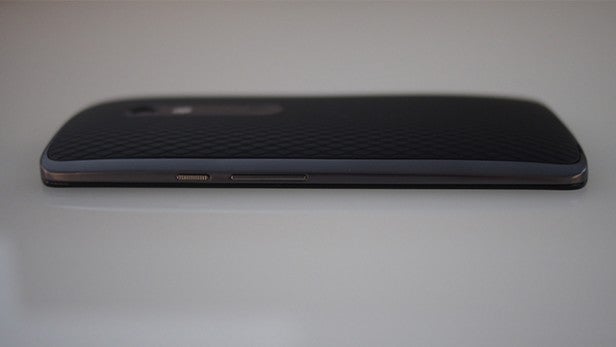 If you’ve followed the Moto X line for the past two years, you’ll know one of their key selling points is their compact size. The original 4.7-inch display toting device was down right miniature for an Android phone at the time and even last year’s 5.2-inch version was easily used with one hand. The same can’t really be said for the Moto X Play, but I guess it just follows the trend of ever increasing phone sizes.

But, measurements only really tell one side of the story. I can easily hold the Moto X Play in one hand, though stretching my thumb from one corner of the screen to another is just out of reach. It’s also quite a dense device, there’s not the hollow feeling you often get with cheaper phones and there it doesn’t creak or bend when you push it hard. 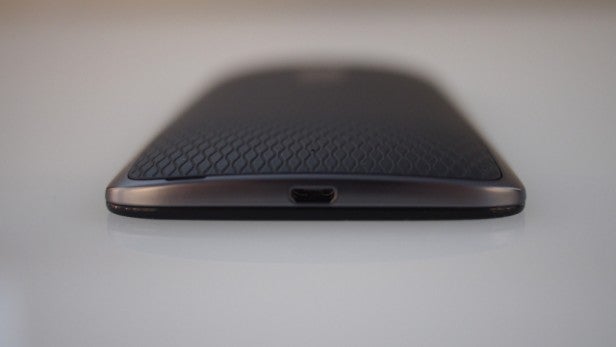 Motorola’s clean, simple design wins out again here and even though it’s not the thinnest phone around, I’d take that extra bulk any day for the big battery tucked inside.

While quad-HD (QHD) panels with copious amounts of pixels are becoming more and more common at the high-end of the market, those glorious displays are yet to filter down to the mid-range. Instead, Motorola has kitted the Moto X Play out with a 5.5-inch, 1080p LCD panel with a 403 ppi (pixels-per-inch). To be honest, after using the Moto X Play I am not pining for a QHD screen at all, and if sticking with a FHD display helps keep the price low then I’m all for it.

The display is sharp, gets super bright when you need it too and nice and dark when you don’t. Motorola has tended to use AMOLED panels for the previous entries in the series, and while the LCD display on the Moto X Play isn’t quite as vibrant and saturated, it renders colours much more accurately and doesn’t have that pinkish tinge when you turn the brightness all the way down. 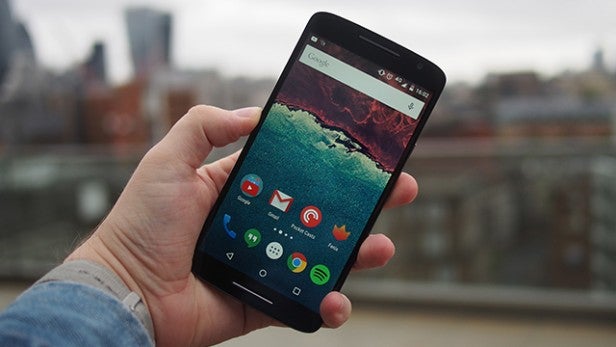 Motorola has also included two screen modes, letting you tailor the settings to your tastes. You can pick between ‘Normal’, which should display more realistic colours, and ‘Vibrant’ which enhances vibrancy and colour saturation. I’ve switched between the two on a number of occasions and while there is a minor visible difference, it doesn’t completely change the experience. I’ve stuck with the ‘Normal’ mode, simply because it rids the display of any over-saturation and it makes colours a little more accurate.

Covering the display is Gorilla Glass 3, again adding to the durable nature of the device. While Gorilla Glass is by no means scratch-resistant, it certainly helps when you accidentally put the phone in the same pocket as your keys.