What is the Asus Transformer Book Chi T300?

Starting life as a line of Android tablets with clever folding keyboard docks, the Asus Transformer range has since morphed and expanded to now include models that run Windows, creating an even more laptop-like experience.

The latest iterations of these devices are the Transformer Book Chi lineup, which consists of the 12in T300, the 10in T100 and the 8.9in T90. The T300 is not just the biggest but also the most powerful too, with specs that rival a conventional Ultrabook laptop.

The idea is to create the perfect hybrid that balances the portability and casual ease of use of a tablet with the true versatility of a Windows laptop. Unfortunately the T300 falls some way short of achieving this.

Where Asus can’t be faulted is in the design of the T300. It’s as sleek and premium-looking a machine as you could hope for, with an black anodised all-metal finish with a little bevelled edge to show off the metal below. 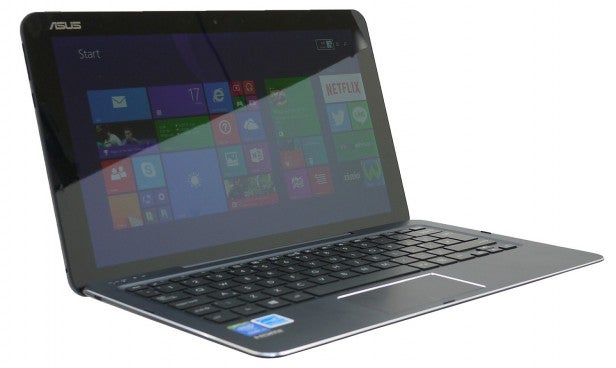 It’s slim too, with the tablet and keyboard section combined coming in at under 18mm. At 1.4kg it’s actually a little heavier than an equivalent Ultrabook laptops but this is because of the toughened glass used to cover the tablet’s touchscreen.

This also makes the design a little top-heavy, and the combination can be prone to tipping backwards – plus it doesn’t look quite as sleek as a thinner-screened Ultrabook – but it’s a surprisingly rare occurrence.

Key to the new slim design is that the hinge mechanism where the tablet docks into the keyboard has been redesigned. Previous Transformers had a bracing section onto which the back of the tablet rested, which meant there was a fairly thick bump when the tablet was closed.

The new design uses a pair of pins and corresponding slots in the tablet to centre the tablet while magnets hold the two pieces together. This has also allowed Asus to do away with the release clip of previous models, instead relying on the magnets alone.

It’s definitely a much neater design, though we did encounter a few occasions where the pieces did come apart when we tried to lift the whole thing when holding only either the keyboard or tablet section. In particular it’s susceptible if lifted from one corner so a little bit of care will be needed in day-to-day use.

Something else that makes the T300 a little inconvenient is the stiffness of the hinge mechanism, which makes it a little awkward to open laptop-style. In fact, it’s only because there’s a little bit of give in the tablet mount that you can open up enough of a gap to get your fingers between the two pieces to prise them apart.

But these are relatively minor concerns when compared to the T300’s two biggest design flaws.

The first is that the keyboard dock no longer has a wired connection to the tablet. This means it can’t provide any extra connections or battery power, as on previous Transformers, and in fact it needs to be charged separately via its microUSB socket. It really is just a jumped-up Bluetooth keyboard and trackpad.

This leads into our final big concern about the overall design, which is that all the connectivity is on the tablet, and because Asus has tried to keep this as slim as possible the result is little in the way of useful connections. Specifically you don’t get any full-size USB ports nor an SD card reader.

The latter we can forgive, but to have no full-size USB ports built into a device that is supposed to be a genuine laptop contender is criminal. Asus does provide a dongle that expands the microUSB 3.0 port to a full-size port but it’s just not the same – if the Microsoft Surface can fit one in then so too can, and should, the T300.

You do also get a microSD slot so there is again an option for expanding the tablet’s storage and making it easier to copy files from your camera (assuming you use a microSD to SD converter). There’s also a combined headphone and microphone jack and, rather bizarrely given the other connectivity limitations, a microHDMI port.

The overall result is a device that doesn’t quite feel at home either as a tablet or a laptop. For the former its sheer size means it’s not really the sort of tablet you’d want to carry around on its own. Sure, it’s nice to be able to ditch the keyboard on occasion and have the touchscreen there for navigation but we’d much rather have a smaller tablet for day-to-day tablet use. Meanwhile, as a laptop alternative it just doesn’t have the features you’d reasonably expect.

The upshot is that the T300 Chi has to be a top performer elsewhere to come close to justifying its existence.

Helping in this regard is that inside this machine is a similar CPU to that in the new MacBook, with an Intel Core M 5Y71 running the show. This is joined by a plentiful 8GB of RAM and 128GB of built-in SSD storage. As such this hybrid laptop definitely has the horsepower to compete with the lower end of the conventional thin-and-light laptop market.