Microsoft’s bundled the Surface Book with the same Surface Pen seen on the Pro 4. The pen magnetically attaches to the Surface Book tablet section’s left side and offers a variety of notation and doodling features. 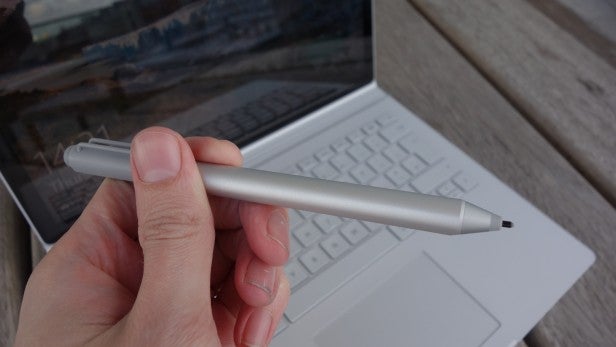 As a piece of hardware the pen is fairly impressive. The Surface Pen is based on N-Trig stylus technology and can recognise a staggering 1,024 pressure levels. Microsoft’s also loaded the screen with robust palm-detection software that instructs the Surface to ignore everything but the pen’s inputs when the stylus is near.

Artists can even swap out the pen’s nibs. Options include the bundled all-round HB tip, sketching-focused B tip, the H tip for technical drawing, and the 2H tip for scrawling speed.

However, it’s the pen’s shortcut keys that make it truly great. The Surface Pen has a single, long select key that runs along the stylus’s side, with function control on its top. The top button is used to activate various shortcuts on the Surface Book. A single press will launch OneNote, a double tap will take a screen grab and a long press will activate Microsoft’s digital assistant, Cortana.

VIDEO: Trusted Explains: Everything you need to know about Windows 10

After a few days with the Surface Book I found myself taking advantage of the OneNote shortcut at least three or four times day. By the end of the week the Surface Book and pen had become my notation tools of choice.

The dock’s Nvidia GPU further improves the Surface Book’s design chops. The Surface Pro 4 was more than capable for small- to medium-sized digital painting or 3D modeling projects. But I found its Intel HD graphics would begin to struggle when faced with hardcore graphics work in things like AfterFX or 3D Studio Max.

With the Surface Book’s GPU attached and running, however, I found these issues have generally been fixed. The Surface Book uses Nvidia’s Optimus technology to decide when to turn the GPU on. By default it activates automatically whenever power-intensive whitelisted applications, like games or graphics software, are powered up. 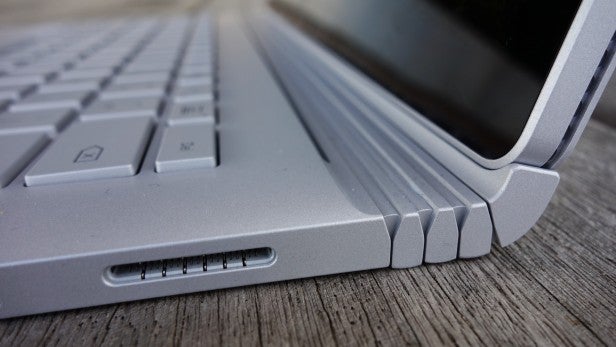 With popular programs, like Photoshop, Illustrator, Adobe Premiere and 3D Studio Max, I found the docking system worked a treat. When set up as a laptop the GPU raced into action and ran large video, digital painting and 3D modelling projects noticeably smoother than the Surface Pro 4.

However, issues began to creep in when started using freeware. When I worked on painting projects in GIMP and Krita a variety of problems arose.

In GIMP and Blender, latency issues crept in and there was an annoying millisecond delay between the pen touching the screen and my command registering. The pen’s pressure-sensitivity levels also became all but useless in GIMP, as the software hasn’t been optimised to work with touchscreens properly.

I also suffered massive issues when trying to use Krita. Due to driver issues Krita initially could only pull up a black, unresponsive screen – which obviously made painting or editing photos impossible.

The Surface Book is available in a variety of configurations. You can pick it up with either a sixth-generation Intel i5 or i7 core CPU. The tablet section of either configuration will be powered by Intel HD graphics 520. From there you can load it with either 8GB or 16GB RAM. All but the most basic $1,300 i5 version will come with an optional Nvidia GeForce GPU in their dock. I tested the top specced i7 variant with 16GB of RAM.

Benchmarked using the GPU-focused 3DMark FireStrike test the Surface Book scored 1,901 when docked and 865 as a tablet. The docked score makes the Surface Book over twice as fast as the Surface Pro 4 and competing i7 Ultrabooks such as the Lenovo Yoga 900, which scored 853 and 834 on FireStrike respectively. 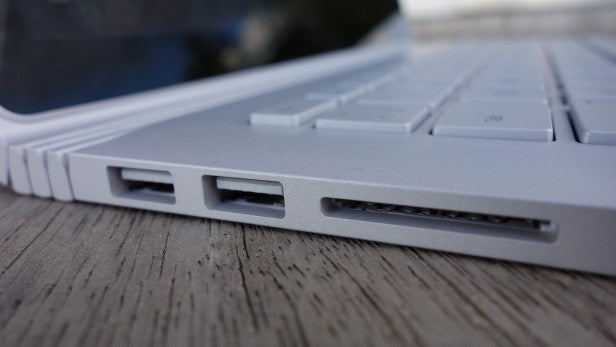 The Surface Book also performed well on the CPU-focused Geekbench 3 benchmark, where it ran in with 3,522 single-core and 7,362 multi-core scores docked – being CPU-focused, the scores only changed by a hundred or so points when the device was set in tablet mode.

But those looking to play games on the Surface Book should be slightly wary. The GPU used in the Surface Book is a custom build that’s more akin to Nvidia’s GT 940M than any of its top-end parts. It has 1GB of VRAM, but it will struggle to render games at high resolutions.

I managed to get XCOM 2 to play in its minimal graphics setting at around 22-30 frames per second. But more demanding titles, like Rise of the Tomb Raider, are unplayable, even at their lowest graphics setting.

As an added air of annoyance, the Surface Book doesn’t feature Nvidia’s game-configuration software either. This means you’ll have to manually experiment to find just how far you can push games each time you play – which, let’s face it, is a faff.