Despite its laptop focus, the Surface Book comes loaded with the same 8-megapixel rear and 5-megapixel front camera combo previously seen on the Surface Pro 4. Given the tablet section’s poor battery I’m not sure how useful the rear camera will be. But during my tests, image quality was pretty good by tablet camera standards. In regular light images have reasonable colour balance and contrast and are suitably sharp.

The front camera is a little more useful thanks to the inclusion of Microsoft’s Windows Hello feature. Windows Hello pairs the main camera with a separate sensor that can read spatial information. The Surface uses the tech to scan and record registered users’ faces. Once scanned, the Surface in theory will automatically unlock when it detects a registered user’s face – removing the need for you to enter your password each time you turn it on. 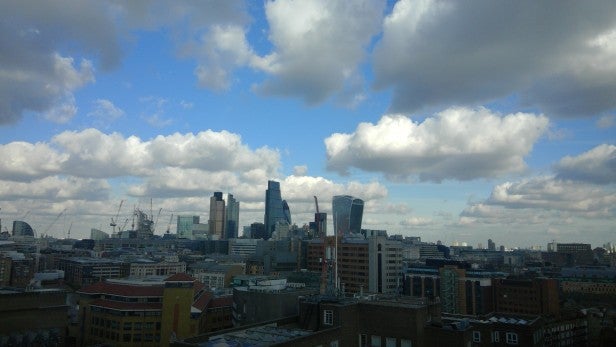 The rear camera is functional, but I wouldn’t rely on it

The Surface Book’s battery life reflects its focus on being a laptop first, tablet second. The keyboard dock and tablet have individual batteries that offer radically different lives. Microsoft claims when used as a laptop the Surface Book will offer 12 hours’ mixed use if both batteries are fully charged. The tablet section by itself has a piddly three-hour projected life by comparison,

I found the listed laptop life to be a wee bit optimistic. Streaming video on Netflix with the screen brightness on the “Suggested” setting, the Surface book lost 9-14% of its charge per hour. More intensive tasks, like 3D gaming and photo editing, put a slightly bigger dent in the battery. Painting in Photoshop the Surface Book lost 15-20% battery per hour. As laptops go, these scores are pretty good and mean the Surface Book should survive most work days or a long-haul flight on a single charge. 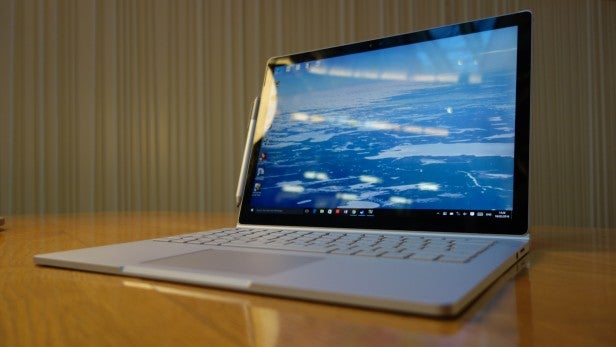 Should I buy a Surface Book?

The Surface Book is the best Windows 10 laptop I’ve tested. It features a wealth of top-end hardware within a slim, travel-friendly chassis, as well as a solid, well-connected keyboard dock.

Thanks to the inclusion of the dock’s optional Nvidia GPU, the Surface Book also smokes most competing Ultrabooks, like the Lenovo Yoga 900 or Dell XPS 13, when it comes to performance. If money is no object, this is the best Windows 10 laptop you can get.

However, with pricing for the most basic i5 version, which doesn’t feature the secondary Nvidia GPU, starting at £1,300, the Surface Book is an expensive option and there are better deals out there – the top-end i7 model with Nvidia graphics and 16GB RAM that I reviewed costs a whopping £2,250.

The best Windows 10 laptop around, but it’s a tad pricey for what it is.