What is the Microsoft Lumia 950?

The Lumia 950 is Microsoft’s first high-end phone to be launched running Windows 10 Mobile. Unfortunately, it’s also one of the most frustrating and disappointing devices I’ve used this year.

Judged on the spec-sheet alone, you’d believe that Microsoft is on to a winner. The Lumia 950 has a fast processor, plenty of RAM, a generous battery with super-quick wireless charging, plus a sharp 5.2-inch display.

Yet, the shortcomings of Windows 10 Mobile and the almost budget feel of the handset make it hard to recommend.

In the past, I’ve been a huge fan of Nokia’s Lumia devices. They’re up there with some of the most slick and classiest phones I’ve used and have stood out from the pack by doing things just that little bit differently.

Available in a range of vivid hues, they were built using metal and high-end materials. In fact, even the cheaper offerings were sturdy little phones that displayed plenty of character.

The 950 may have the Lumia name, but it lacks that Nokia charm. It’s a Polycarbonate slab, with curved corners and flat sides, available in black or white. Three clicky buttons can be found along one side of the phone – including one for opening up the camera – while the USB-C charging port sits along the bottom. And that’s all there is to say. The Lumia 950 is dull – and I’ve used budget Nokia phones in the past that feel better.

Some will be happy to discover that the rear of the phone can be removed to easily access the battery, SIM and microSD slots. However, it juts out ever so slightly from the sides of the phone and each time I tried to prize it off, it felt like it was going to snap.

Unlike other flagships – the Nexus 6P from Google and iPhone 6S from Apple, for example – the Lumia 950 lacks the precision finish that I’ve come to expect from a premium handset. Nokia used to be one of the best in this regard, so it’s a real shame to see it lost here. 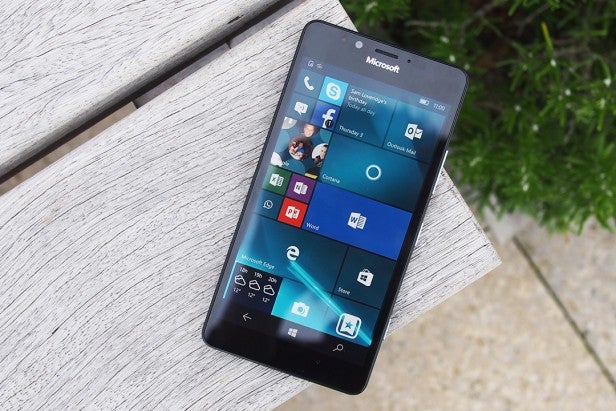 Since the phone has a fairly small – by today’s standards – 5.2-inch display, the Lumia 950 is compact enough to be used comfortably in one hand. It’s dense, though, weighing in at 150g – 7g more than the aluminium-clad iPhone 6S.

Considering that this phone retails for the same price as the gorgeous Nexus 6P and last year’s iPhone 6, it really shouldn’t feel worse than the £199 OnePlus X. 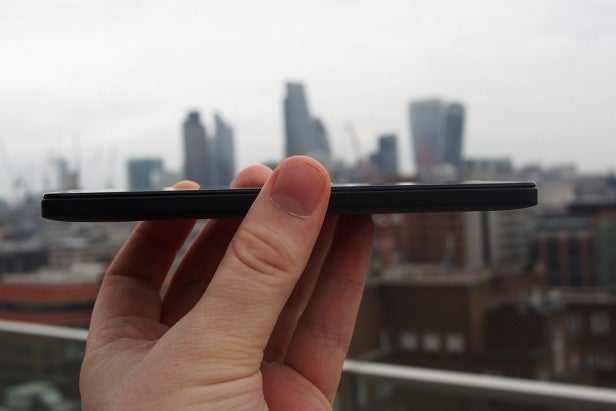 The Lumia 950 may look like a budget Nokia circa 2012, but Microsoft has packed the phone with plenty of the latest tech. This begins with the 5.2-inch quad-HD panel covered in Gorilla Glass 4.

It’s a pixel-dense display, of that there’s no doubt, but it can’t quite match some of the other AMOLED panels on the market.

I’ll start with the positives. It’s sharp and, since it’s AMOLED, it offers up a solid punch of vibrant colour – without becoming oversaturated. Blacks are typically inky and viewing angles are superb. 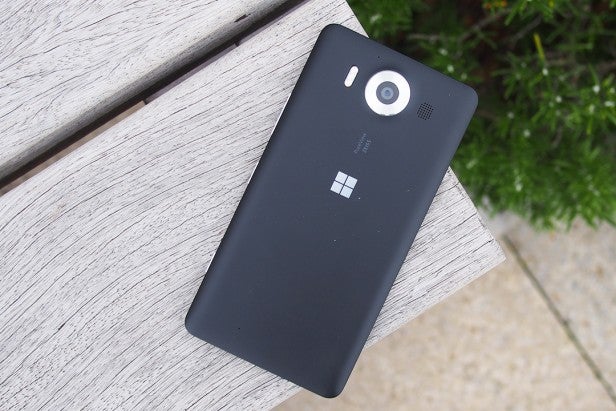 Outdoor visibility is decent too, although there are a lot of reflections under bright lights. However, this is an issue for all phones these days.

My main concern with this panel is that it just doesn’t have enough oomph when it comes to brightness. Switching it from 50% to 75% and even 100% doesn’t result in an obvious difference, instead resulting in colours looking muddy.

While this isn’t something you’ll notice unless you have all the flagships lined up, it’s frustrating nevertheless.