What is the Samsung Galaxy Alpha?

The Galaxy Alpha was the first step in Samsung’s transition to metal phones. It’s not metal and glass like the Galaxy S6 and S6 Edge, it’s more like the Galaxy Note 4 – a metal edge with a plastic back cover. So it hasn’t opted for an entirely metal body like the HTC One M9, but it’s a significant move away from Samsung’s usual shiny and faux-leather plastic towards better quality materials.

In terms of specs it rests somewhere between the S5 Mini and the Galaxy S5 in Samsung’s 2014 smartphone line-up, the 4.7-inch Alpha has the same sized screen and costs the same as the iPhone 6. Samsung is clearly hoping to take a big chunk out of Apple’s phone sales.

But while this is an excellent ‘small’ Android handset in its own right we can’t help feeling that it doesn’t do things differently enough from the larger S5 – apart from the design that is.

The metal frame is the stand-out feature here, but it’s the weight – or rather lack of it – that makes the biggest first impression. It weighs just 115g, making it lighter than the 4.7-inch iPhone 6 (129g), the S5 Mini (120g) and only slightly heavier than the iPhone 5S (112g). The lightness likely has a lot to do with the fact that there’s still plenty of plastic to balance out the more expensive, and heavier, materials.

Samsung still uses a dimpled soft-touch back, although the dotted pattern is more discreet and softer than it is on the S5 and the S5 Mini. The back is also where you’ll find the heart-rate sensor, next to a 12-megapixel camera with LED flash.

Up front, the bezel around the sides of the screen is nice and slim, while the dotted theme from the back continues quite prominently on the front. You might not notice it, but we couldn’t help feeling it was slightly naff and would’ve been better left plain. The home button with its metal trim is a familiar sight and also supports the fingerprint-recognition technology that was first introduced on the S5. 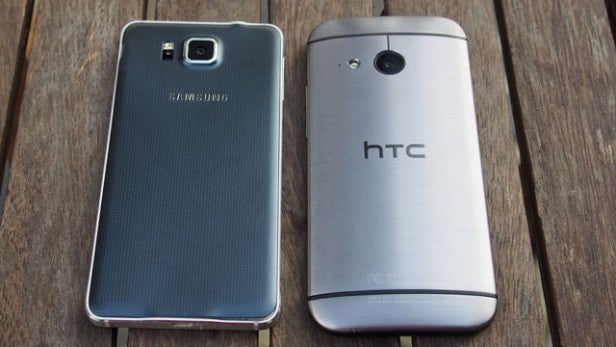 The Galaxy Alpha alongside the HTC One Mini 2

And so to the metal. Samsung uses an aluminium frame around the edges of the Alpha, including the buttons and volume rocker, replacing the usual faux-metal plastic trim. It’s difficult not to immediately think of the iPhone 5S when you get your hands on it. The metal has a cold, flat feel with an anodised finish to give it a similar metallic sheen to Apple’s smartphone, but different to the more rounded and soft iPhone 6 design. The corners are gently raised to help gripping it in landscape mode, and it really does the trick of making this a much more attractive phone.

The problem, however, is that there’s still a great deal of plastic here, and it’s not really in the same league when sitting next to HTC’s all metal phones. It’s a lovely handset to grip, though, and 4.7 inches appears to be the magic number for a so-called ‘smaller’ phone. In that respect, the Alpha is more manageable in one hand, although the corners can dig in to your palm ever so slightly. 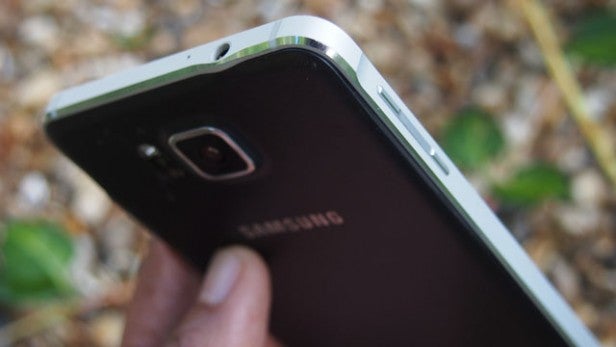 The comparisons with the iPhone don’t end there. The volume rocker is on the left edge and the speaker is on the bottom edge next to the micro-USB charging port. Like the S5 Mini, the Galaxy Alpha misses out on USB 3.0 support.

The Alpha is just 6.7mm thick, so it’s a slim phone as well, but it’s not water- and dust-resistant like the S5 and the S5 Mini.

The back is still removable, as is the smaller-capacity battery, although there’s no microSD card slot, and now you’ll need a nano-SIM. It’s those kinds of design inconsistencies across the Galaxy phones that can be really frustrating at times, though in this case it does make it easier to switch from an iPhone, which was perhaps Samsung’s aim. 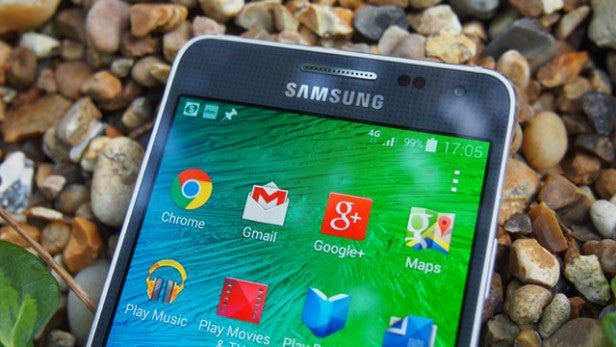 The Galaxy Alpha features a 4.7-inch 720p HD screen, so it doesn’t match the S5’s Full HD resolution and has more in common with the 4.5-inch S5 Mini. The 312ppi pixel density is short of the 326ppi squeezed of the S5 Mini, though the difference is negligible and it’s about the same as the iPhone 6.

Samsung still employs a Super AMOLED panel with the same PenTile array, which, as explained in our S5 Mini review, can lead to some fuzziness up close. You can still expect an exceptionally bright screen with impressively deep blacks, though colours and contrast tend to look more erratic on the Alpha.

Running a video comparison next to the S5 and the S5 Mini, the Alpha still delivers a sharp 720p HD display, with good brightness and sharp, detailed images. The differences with the 1080p screen on the S5 are more noticeable. The faces in the episode of Justified we watched showed more detail, with more natural colours. Colours are more accurate and richer on the S5. The differences between the S5 Mini aren’t so apparent, and there’s very little to choose between the two smaller Samsung phones.

This is a solid-performing 720p HD screen on the whole. It’s just a shame Samsung didn’t give it the same Full HD treatment as the Galaxy S5, especially when you consider the difference in price.