The Mushroom Kingdom and madcap world of Ubisoft’s Rabbids are two franchises I never thought would go together, but much like peanut butter and jam, they have combined to create something beautiful. Nintendo Switch fans are treated to yet another excellent exclusive, and perhaps one of the most original seen on the console to date, even if it can feel a little too much like a one-trick pony.

The premise is simple: a scientist in one world has created a device known as the “SupaMerge” which can help combine any two things into one brand-new creation. Of course, the intentions of said device were wholesome, but once the rampant Rabbids get a hold of the device, chaos ensues, leading to the world of Ubisoft’s mascots invading Super Mario’s world to hilarious results.

After the SupaMerge headset forges with one of the Rabbids, creating an absolutely adorable little bunny, Mario and his new alliance must try and get ‘Spawny’ before the bad guys get there first. The story is simple, but paves way for some laugh-out-loud moments between the Rabbids, especially when they meet their Mushroom Kingdom counterparts. 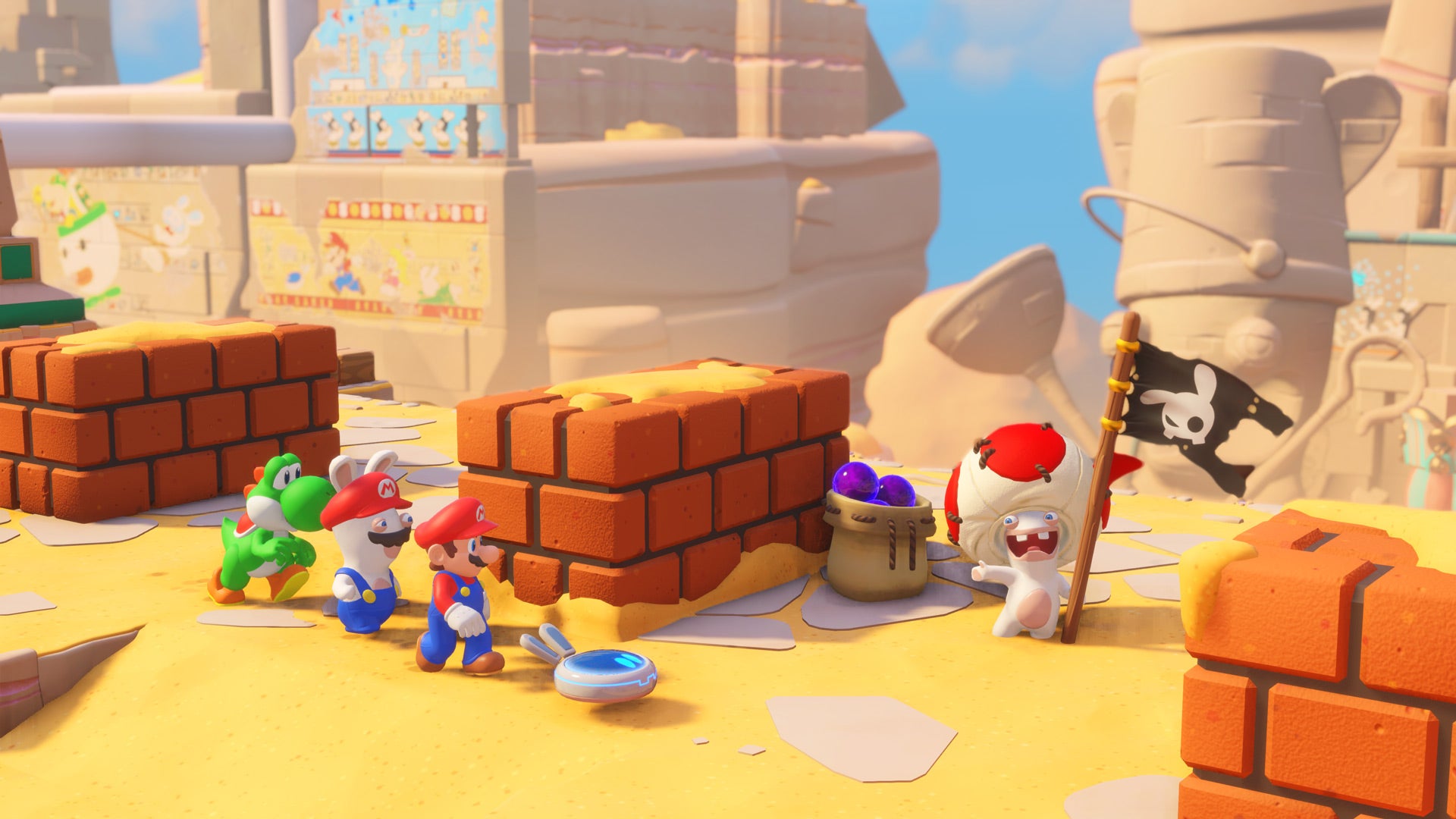 The first time Rabbid Mario met the moustached man himself, or when Rabbid Peach inspected the real thing and gave her more than a few judgemental glares, were some genuinely funny moments and really helped build this absolutely stunning world Ubisoft has created.

Breath of the Wild and Mario Kart 8 Deluxe are both visually stunning on the Switch, but I think Mario + Rabbids is the most graphically impressive game and my favourite in terms of creativity. Seeing a giant pair of underpants ensnare a Bullet Bill as I move from one chapter to the next, or a couple of Rabbids enjoying an Old West shootout in the desert makes me look forward to every new world as I don’t know what’s to come.

Having played Mario for over 20 years, Kingdom Battle is captivating as it’s something that feels genuinely new. The level design is as beautiful as it is inventive. 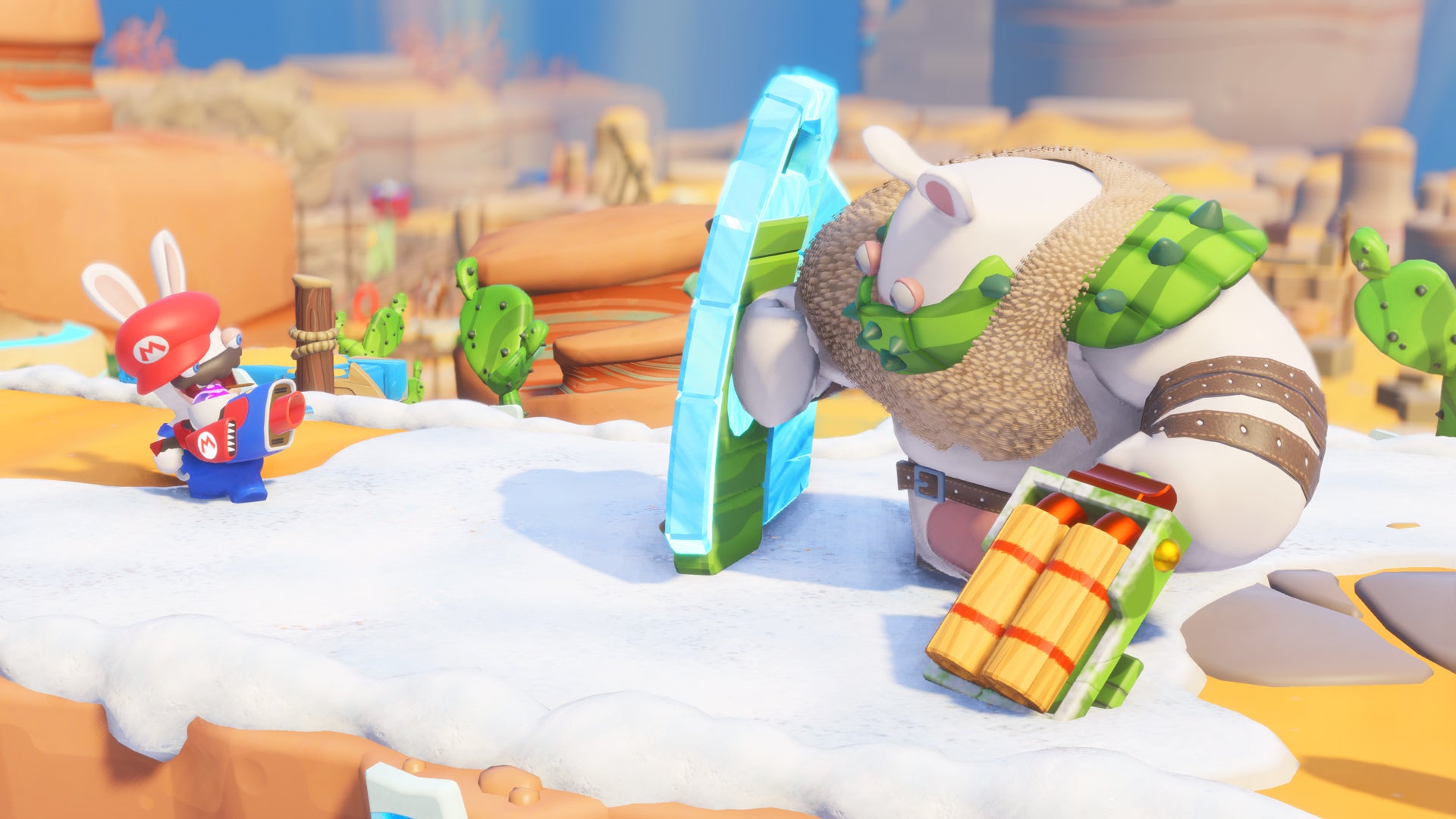 This, of course, carries over to gameplay, too. Nobody has ever played a Mario XCOM game before, and Kingdom Battle creates an experience offering a similar level of complexity without overwhelming the player with difficulty. The longer I played, the more I fell in love with combat as I started to unlock new mechanics and learned to combine different character abilities, making every turn feel like a sports manager’s tactics board.

Unlike XCOM, where I tend to splinter my squad off into groups, in Kingdom Battle, keeping a team within move distance from each other is vital, as they can combine to amazing effect. Mario, for instance, has an ability which buffs the attack of all nearby allies, Luigi will increase allies’ range of movement, Rabbid Peach heals, but you all need to stick close by. Also, if you run through one of your allies, you get a Team Jump, which increases your range of movement. Eventually, Mario can learn to use this jump to bounce on an enemy’s head for a free hit. Other characters can slide into enemies while moving for a cheap shot, Rabbid Peach learns to hit multiple enemies in one move. It’s all about doing as much damage as possible before firing a single shot.

There are also stat effects on weapons. Bounce can send an enemy flying around the map, as can push, while honey and stone freezes them in place. This is complemented brilliantly by the enemy variety, meaning you’ll constantly want to switch weapons depending on the foes you face. Some charge at you every time they’re hit, meaning you must be acutely aware of distance, and using oversight – which attacks enemies as soon as they move within your range – is incredibly risky. It’s an incredible balancing act where one piece out of place sees your whole plan fall to pieces. 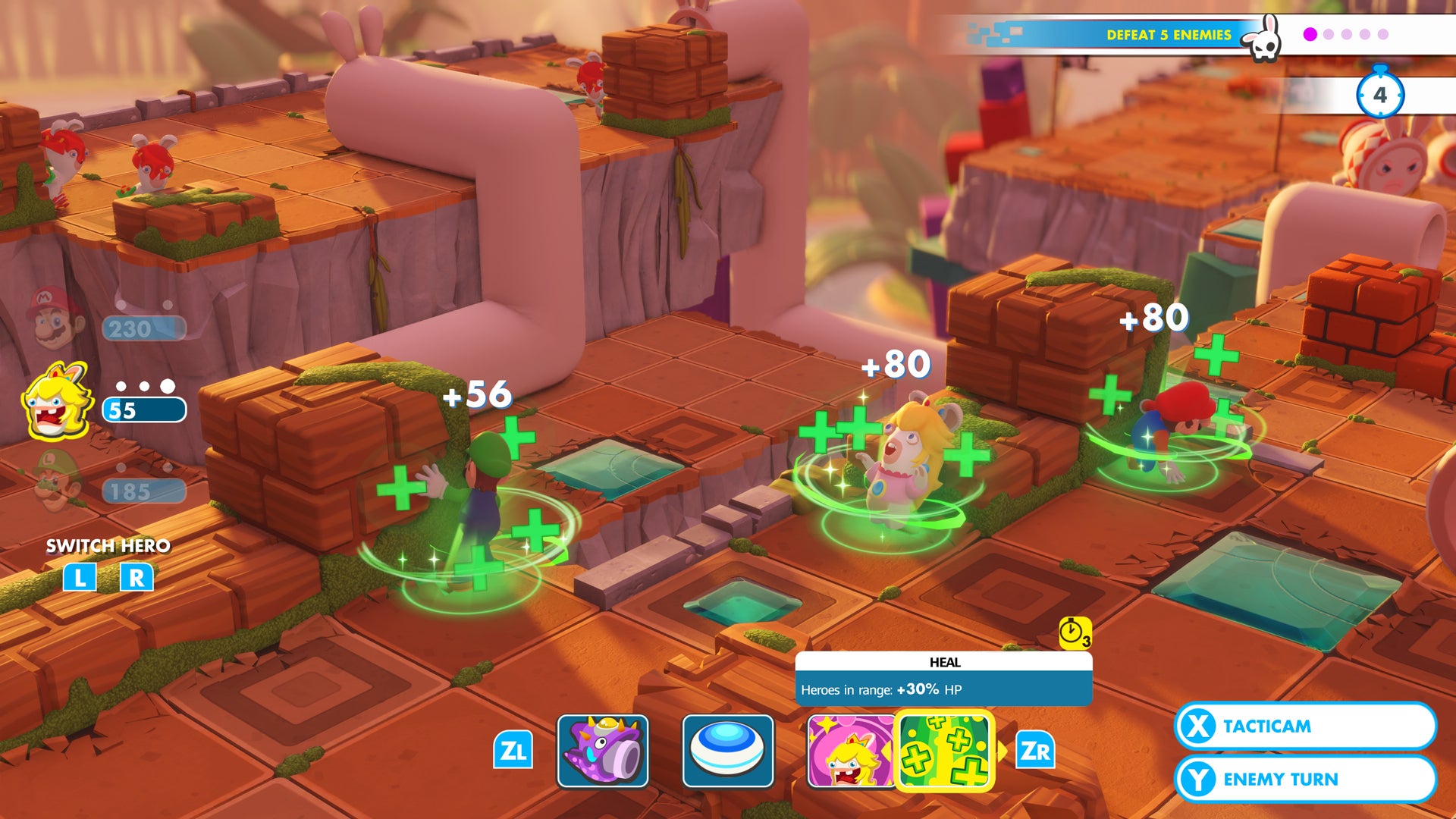 It sounds like an awful lot to take in, but Ubisoft has done a superb job of taking the whole of chapter one to gradually introduce all of these systems to the player so it all becomes natural. By the first chapter’s boss (I should add, the boss fights are SO good), I was leaping off Rabbid Luigi as Mario, bouncing on a baddy’s head, shooting them, triggering Luigi’s oversight, praying it activated bounce, which it did, and sending the foe flying out of the arena for the kill. It creates domino effect moments which are immensely satisfying.

But just because this game is adorable, don’t think it won’t destroy you. This is the hardest Mario game I’ve ever played. Sprinkled throughout the game’s chapters are sharp difficulty spikes, which at times feel unfair, forcing me to backtrack throughout the world to collect coins in order to buy better equipment, or go back and replay challenges now unlocked in completed chapters to feel like I can face the task ahead. There is an Easy mode, which can be activated on a per-level basis and gives you 50% extra health, but my prideful ways prevented me from ever activating it.

Sometimes it can be due to team composition, requiring the brute force of Rabbid Mario’s shotgun or the range of Luigi’s sniper, but the trouble is you don’t know until the battle starts which characters are best suited to the level, so once you start understanding the characters, you’ll frequently be restarting a battle soon after it starts to find the right mix of heroes. 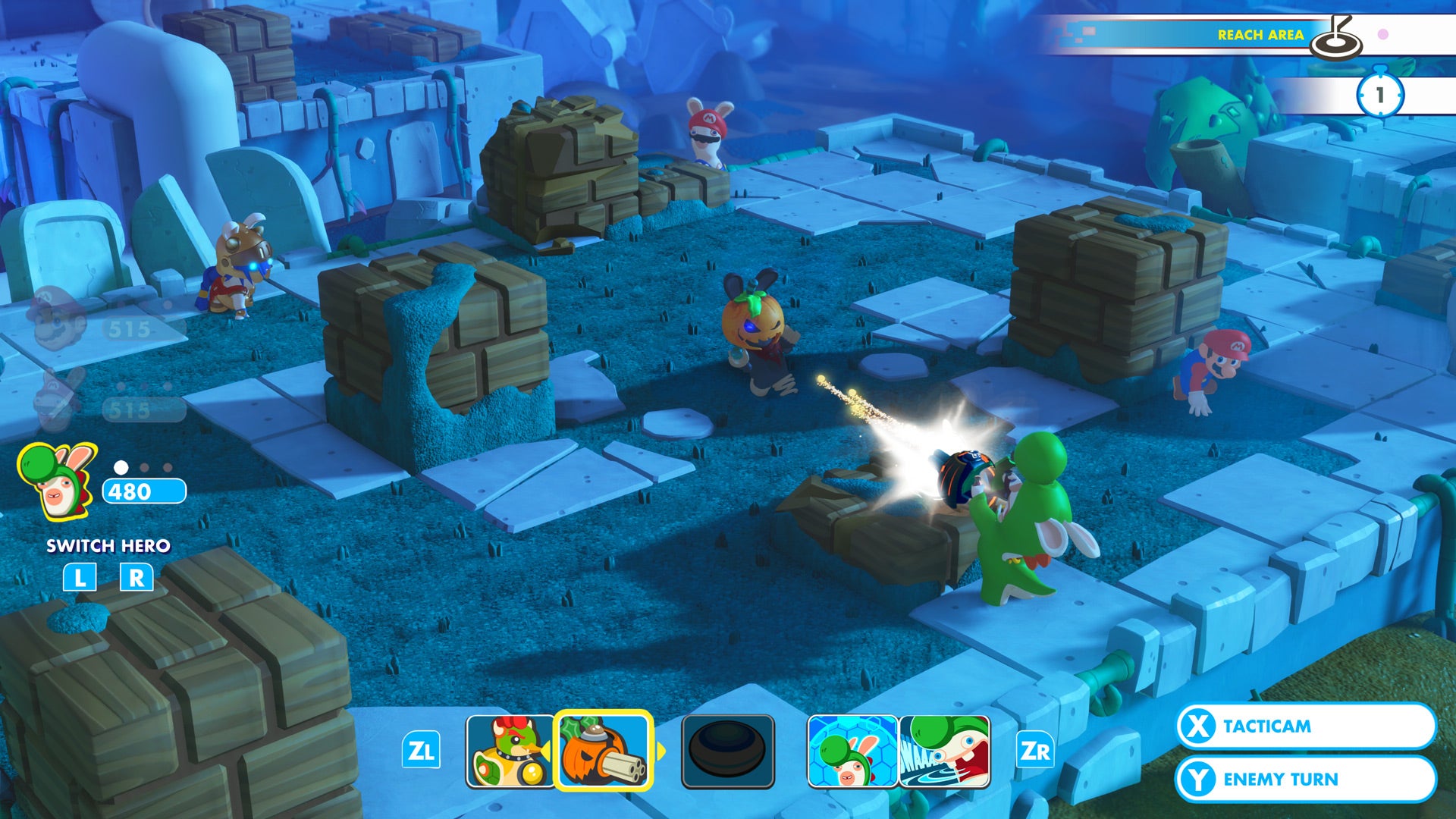 The other downfall to this game is that, outside of the actual (albeit immensely enjoyable) battles, there isn’t an awful lot to do. Mario and co are free to roam around the world, hunting for chests which can include weapons, character models, music and art, and these can be hidden in puzzles, but if these are overlooked, you’re basically wandering from one fight to the next.

Mario + Rabbids Kingdom Battle is yet another great Nintendo Switch exclusive, and one of the most original Mario titles we’ve seen in a long time. It may not do much outside of the core combat, but even that is enough to keep you entertained for its duration.

Just be prepared for the sharp difficulty spikes, and don’t expect the game to go easy on you.