What is the Nintendo Classic Mini: SNES?

The NES Classic Mini sold like hotcakes when it launched last year, so it’s no surprise that Nintendo is back one year on with a miniature version of the console’s successor, the SNES. Thankfully, the company has taken on board some of the criticisms of the first console with the development of its successor, creating a better miniature that will no doubt fly off the shelves once again.

The SNES Mini comes with two controllers, both sporting longer cables than their NES counterparts. Where the NES’s measured 3ft, Nintendo confirmed ahead of launch that the SNES’s cables are 2ft longer. This doesn’t change the fact that cables of any sort remain a faff, but it will at least help make setup a little more convenient. The added length may still prove insufficient in some setups, though, which means you’ll always need to be within arm’s reach of the SNES itself. 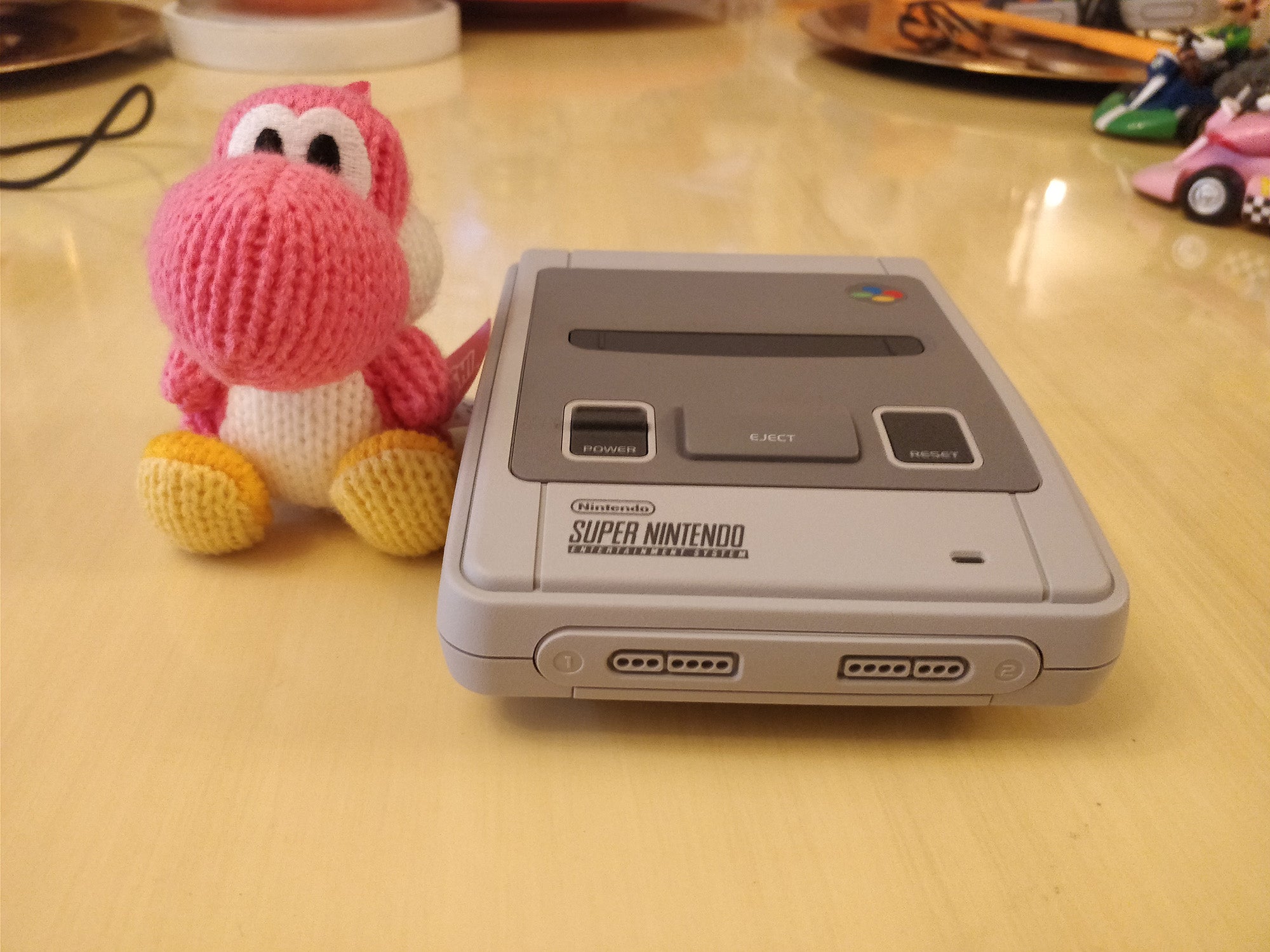 This feels deliberate on Nintendo’s part, since much of the functionality we’ve now become accustomed to on the controller is part of the SNES console itself. For example, if you launch a game then the only way to back out to the main menu is by hitting the reset button and then choosing another. The SNES controller hasn’t had any extra functionality added, and it lacks a home button of the type seen on the PS4 and Xbox One. This is perhaps an example of Nintendo sticking a little too rigidly to the retro feel.

The benefit of Nintendo staying true to its roots, however, is in the SNES you have an absolutely gorgeous-looking machine. The console is a perfectly recreated version of the console I spent my childhood playing, one that will easily fit into the palm of my hand. The textured plastic case even has the “feel” of the original NES. 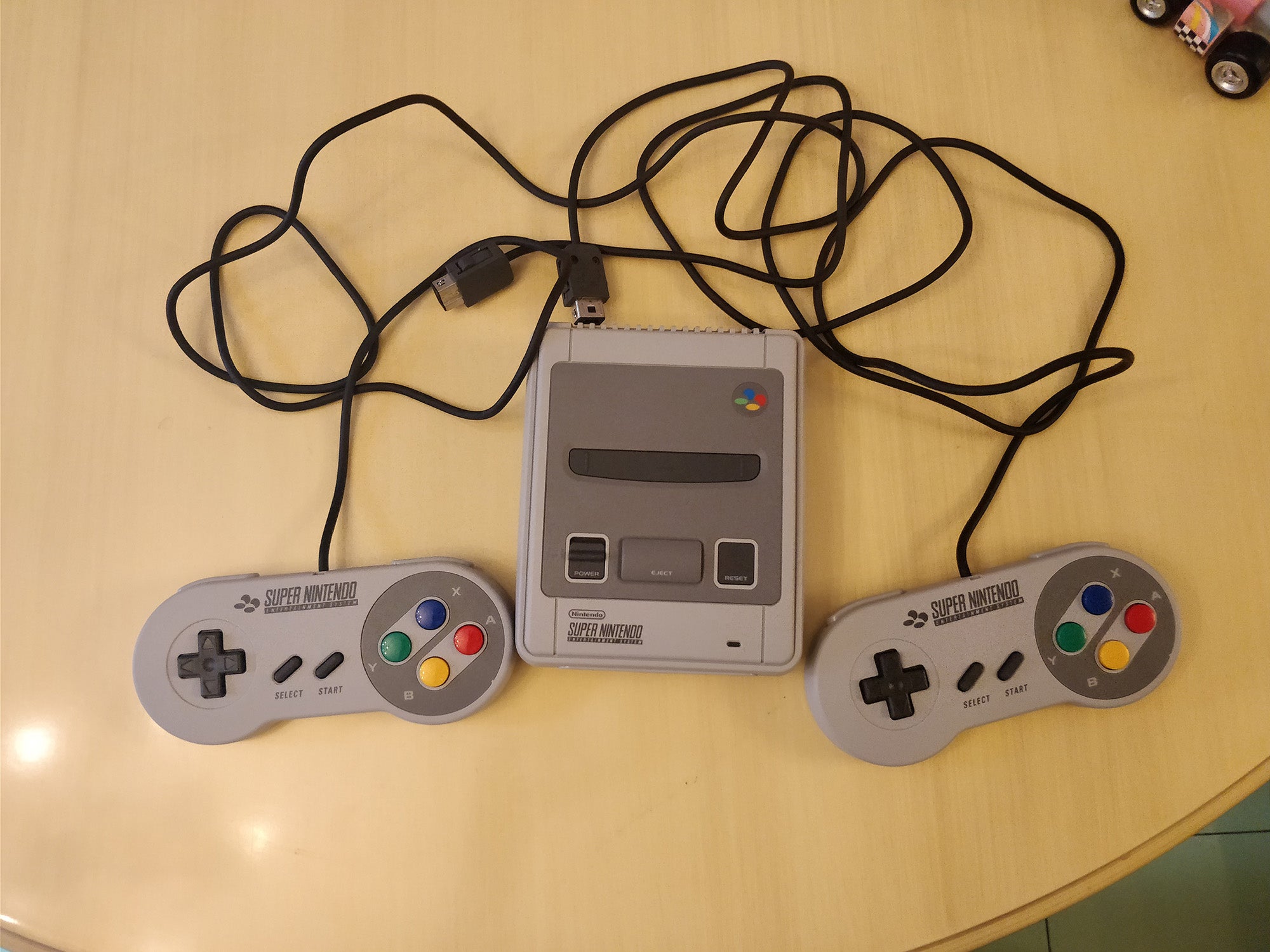 Thankfully, the SNES’s base doesn’t sport the fade yellow of my old box. As you’d expect, the eject button has no function; I’ll most certainly miss ejecting cartridges as you would toast from a toaster in the digital age.

The front of the console is still home to the classic controller ports – pulling down a flap reveals modern inputs, those included on both the Mini NES and Wii peripherals. The controllers are full-size versions of their ‘90s counterparts, and feel excellent too.

The SNES has fewer games than the NES Classic Mini; but, arguably, this is because the SNES goes for quality over quantity. I could go on for hours about the titles missing from the box – I’m still weeping over the absence of Aladdin – but there’s no doubt that the miniature SNES is loaded with stone-cold classics. 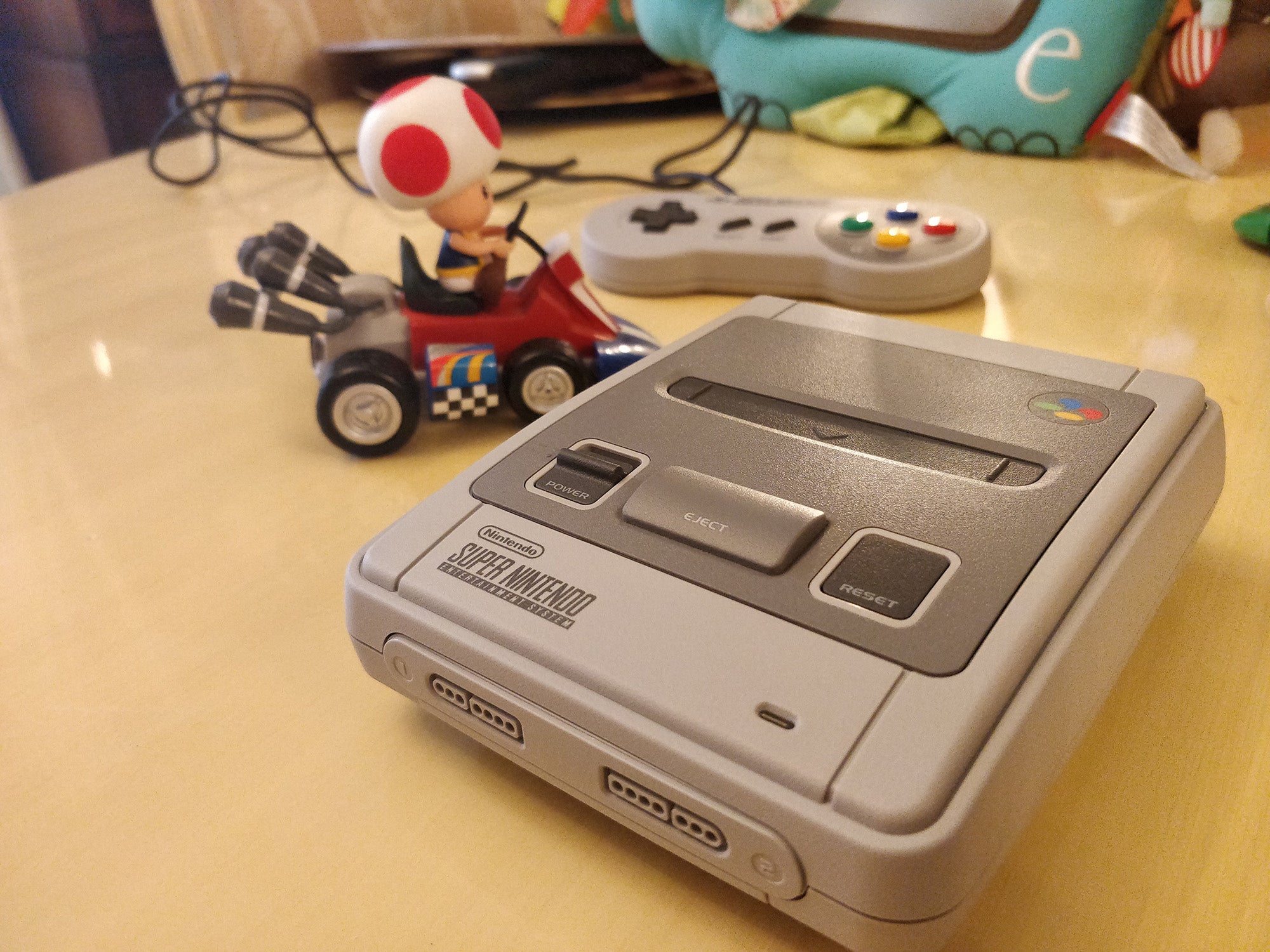 What’s great is that many of them are the direct sequels to games on the NES Mini, so for those lucky enough to own both consoles, you get to see the evolution of the likes of Punch-Out!! and Ghosts ’n Goblins.

The one downside is that these are exact ports of their original versions, warts and all. There will be some games where the frame rate dips in an intense moment; Star Fox, in particular, becomes almost unplayable at times. Players such as myself, who wear rose-tinted specs when it comes to ‘90s gaming, won’t be as put-off by such issues as newcomers, but it’s certainly a fly in the ointment.

On the plus side, three different display formats mean that you can beautify the games a little. Retro fans can stick with the classic CRT filter, or you can opt for the 4:3 aspect ratio, or even go the full hog and use “Pixel Perfect” for the most crisp look. I opted for CRT, which gives a beautiful softness to the games, taking me back to the early 90s when TVs had giant backs and took up half of the living room.

Since the display doesn’t fill the whole screen, you can also choose a frame to border the game; the correct choice is the red curtains, which look exactly like those from Super Mario Bros 3. You can also store up to four save files per game, which is great for the two-player games – of which, once again, there are a greater number on offer here than in the NES Mini. 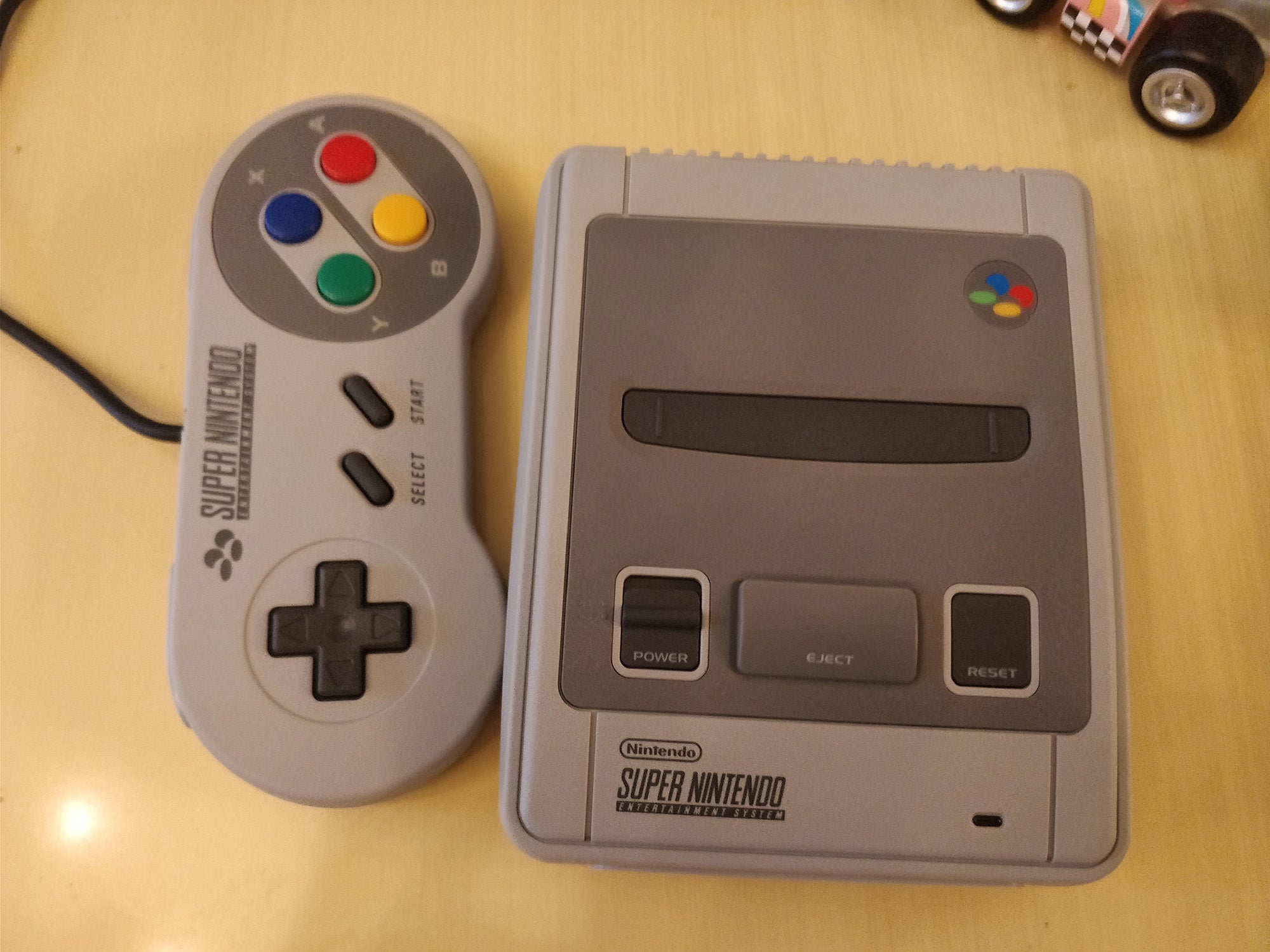 While all the above are fantastic features, the real shining star is the addition of the new rewind functionality. For those old enough to remember, or even for those picking up a SNES for the very first time, these are difficult games. The likes of Super Punch-Out!! and Super Ghouls ‘n Ghosts would have left you a weeping mess before you’d had hours and hours of practice. Lacking the huge memory capacity of modern consoles, it was a game’s difficulty level that determined its longevity.

Which is why the ability to undo mistakes and cheap deaths is hugely welcome with the SNES. Dying in what feels like an impossible situation can be rectified by hitting the reset button on the console; pressing ‘X’ over the save file will show a replay of your game, allowing you to fast-forward and rewind to find the perfect place to try again. Since most of these games have limited lives, this is an absolute godsend for those who just want to see each game in its entirety. Now, I finally have the opportunity to get to the end of Super Castlevania IV.

Should I buy the Nintendo Classic Mini: SNES?

The continued use of cabled controllers will be a bugbear for some, but the improved quality of the games on offer, addition of a rewind function and, of course, the inclusion of the never-before-released Star Fox 2 will be enough to make the SNES Mini a great console for many.

Personally, I love it. It’s loaded with games that defined my childhood, all of which play exactly as I remember – and are available without having to blow the arse out of a cartridge in order to work. Plus, I can complete them in an afternoon thanks to the rewind function.

As a father, this is the perfect first console that I’ll introduce to my son. It’s like a time capsule filled with some of the greatest games ever made, all for less than £100.

A lovingly made retro console that’s well worth the money.

Did you manage to get your mitts on a SNES Classic? Tweets us @TrustedReviews and let us know what you think!