Over a decade ago Super Mario 64 defined the template for 3D platform games, and set a standard that surprisingly few of the games that followed would even get near to. Sadly for Nintendo, that included its own Gamecube sequel. It seems harsh to label a game as generally enjoyable as Super Mario Sunshine a disappointment, but it’s hard to deny that it failed to match its predecessor for invention, and where it did innovate – the F.L.U.D.D. water-cannon – it added complications that changed the feel of the game for the worse. 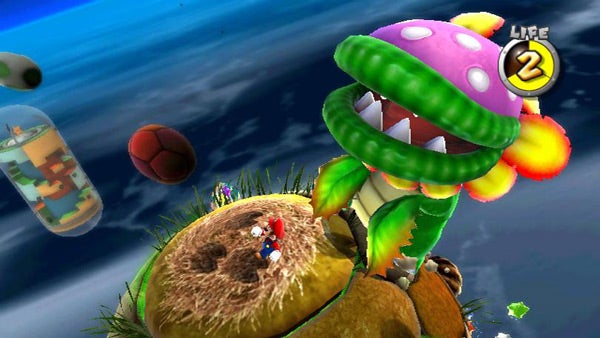 Now, however, Nintendo has knuckled down to create a truly worthy follow-up to Super Mario 64. Curiously it seems to have found its impetus not in Super Mario Sunshine’s wider worlds or coherent settings, but in its weird, shorter puzzle levels. These broke out from the main game in a riot of brightly coloured blocks, traps and mechanisms, where the player’s expectations and the rules of gravity could be tweaked and pulled like Mario’s features in the legendary SM64 start screen. These sections had a straighter, more arcade feel, as if Nintendo had decided to bring the more open 3D worlds of SM64 into collision with the more linear levels of the old 2D Mario games. They were hard – occasionally draconian- but they also had an energy that other parts of SMS were clearly missing. 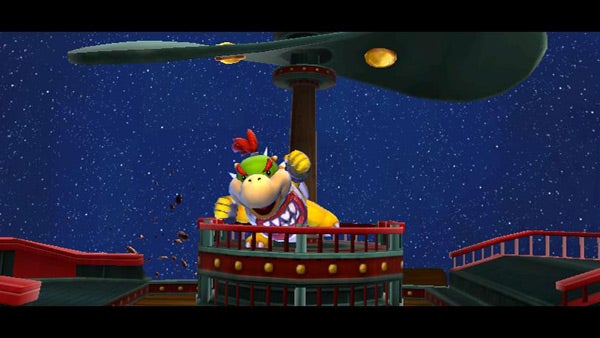 With SMG, Nintendo has taken this energy and run with it. Mario no longer races and leaps around flat worlds of flat floating platforms. It’s goodbye to the sunshine towns, haunted hotels, industrial facilities and golden beaches of SMS, and hello to the strange realms of outer space – or at least what passes for space in the universe of the Mushroom Kingdom. We’re no longer interested in worlds but in galaxies: clusters of planetoids, linked by trails or odd stellar pathways, some of them small enough to run around within a couple of seconds, and many navigable on both the ‘top’ and ‘bottom’ of the surface. The basic objective remains collecting stars, usually through the completion of particular oddball tasks or boss-battling missions, but that’s all that’s really familiar here. Up is no longer always up as you see it on your screen, and your brain will be battling to make sense of new angles and directions. At first, playing Super Mario Galaxy can be a confusing, somewhat disorienting experience.

From the start, there’s something wonderful about this new willingness to change the Mario rulebook, but there’s also a fear that – as with Sunshine – messing with Mario’s dynamics could be the breaking of the game. Doubters won’t find comfort, either, in the use to which the Wii remote has been put. Sensibly, Nintendo has avoided making it part of the basic running and jumping stuff; you still move Mario with the analogue stick on the Nunchuk and jump with the big A button on the remote. The remote itself mostly operates an onscreen cursor that collects space debris – with coins one of two main resources in the game. However, the remote also turns out to be your main means of attack. By shaking it you cause Mario to spin, knocking enemies off their feet or making them dizzy so Mario can simply walk into them to mop them up. As with the sword attacks in Zelda, it feels a little tacked on and you can’t help wondering whether a simple button press might have been more reliable and effective. 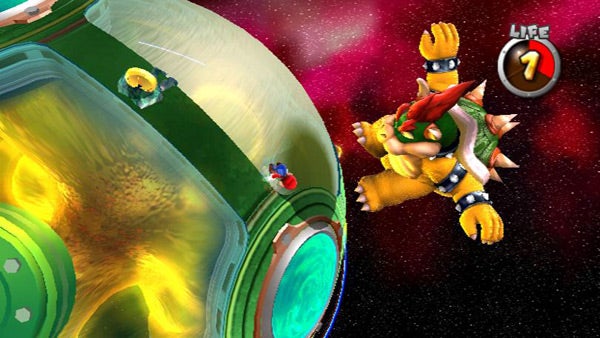 Soon the game throws other remote-controlled mechanisms, like gravity points that you highlight with the pointer then press A to drag Mario through space towards them, or big stars that shoot you through the sky like a cannon at a shake of the controller. On the plus side the camera is now almost totally computer controlled, and the game is all the better for it. Your view is nearly always perfect for the task at hand, whether it’s hanging behind Mario or pulling back to offer him a fixed, old-school 2D view during particular spots of platform action. All the same, the way the game uses the remote does give you pause to ponder: is SMG still accessible? Is it too weird and too strange to work? 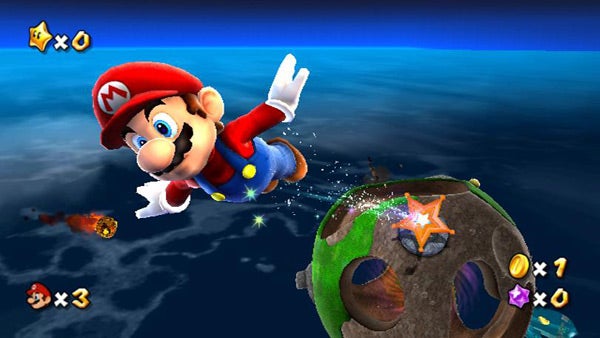 All I can say is that after you’ve collected your first few stars, it all clicks into place. New galaxies open, new tasks appear, and – once you’re hooked – SMG just keeps on getting better and better and better. As you learn the ropes and discover new ways to use the remote, Nintendo does its usual trick: it starts applying the new rules it’s teaching you to create weird and wonderful levels that – even when they embrace old themes like the ghost house or the ice world – feel a million miles away from the generic nonsense of the average 3D platformer.

We get goldfish bowl planets where you swim around an encapsulated sea. We get galaxies where you ride flowers from planetoid to planetoid along the currents of a strange celestial wind. We get clusters of spider-haunted space wrecks, fearsome space armadas and beetle-infested insect worlds. We get planets that spiral and coil in such a totally bonkers way that you begin to doubt that there are only three dimensions to represent on screen. As before, there’s a certain amount of freedom to do what you want when you want. You’re never stuck bashing away at one galaxy or objective, you can always leave it and tackle something else. 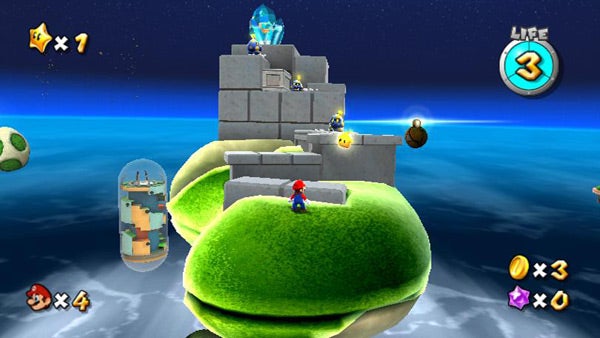 The more the game progresses, the more you suspect that Nintendo has spent the time since SMS brainstorming new ideas and that the team is hell-bent on throwing every single one into the pot. SMG plays with gravity and elastic and sticky materials in a way that’s guaranteed to make you scratch your head and smile. Meanwhile, Mario transforms into an ice-skating cool dude or a hovering Bee Mario, unleashing new powers that add new fun aspects to the gameplay. At times the game riffs on a stage from SM64, while at other times it seems to be reaching back into his classic 2D roots much as New Super Mario Bros. on the DS did last year. Whatever it’s doing, two things are constant: SMG is always inspired, and always inventive. 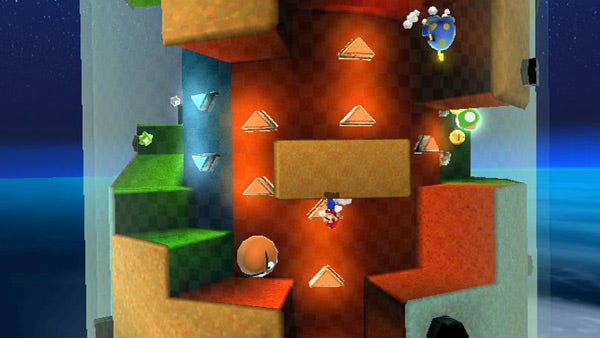 What’s more, it feels like a game that has been designed to please as many people as humanly possible. More and more now I find that games demand an hour or two of you at a time to make them worth booting up at all, but you can put SMG on for twenty minutes, do a star or two, and feel like you’ve achieved something. At the same time, it’s hideously addictive and ridiculously long-lasting. Collecting the minimum number of stars to complete the core game will take you at least twice as long as it would to polish off two average games these days, but do you really want to miss out on all those extra little twinklers? 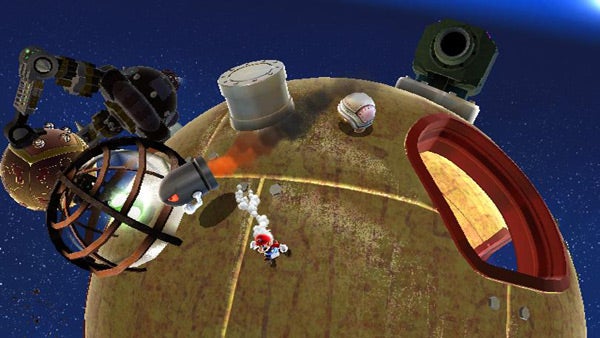 Sure, there are times when the remote doesn’t behave and you end up frustrated, but these times are fairly few and far between. Even the boss battles here are exceptional – both in terms of quantity and quality. Why do so few developers realise they should be a pleasure, not a pain, to play? I hope the guys at Rare who did the boss battles in Kameo look at the examples here and weep. And how is it that Nintendo can come up with a cast of characters – Mario, Luigi, Bowser and Bowser Jnr, and the rest – so lovable when so many other developers fail to create even one.

Visually, SMG confirms what we always expected of the Wii. Sure, it’s no Call of Duty 4 or Crysis. Apart from some lovely rim-lighting on the characters and some fantastic rusty metal and water effects, it’s not a huge progression on what we saw in Super Mario Sunshine. Yet the game constantly invokes a sense of wonder, not from photo-realism but from its sheer imagination. To arrive at a new galaxy and see the planetoids, trails and miscellaneous weird objects spiralling out in front of you is a real event. As ever, Nintendo’s sense of playfulness and attention to detail is unparalleled. And as for the music… do you really need to think about how good it is to hear new versions of the classic themes among some fantastic epic tracks befitting Mario’s new cosmic journey? 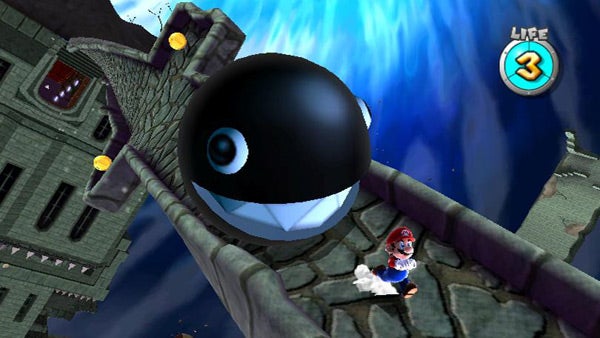 Few series’ get to invent or reinvent a genre more than once, but then this isn’t any ordinary series. The original Super Mario Bros turned the single-screen arcade platform game into the scrolling platform adventure. Super Mario 3 and Super Mario World turned that into something of real depth and complexity. Super Mario 64 then revealed how you could take that same gameplay and make it work in 3D. Now Super Mario Galaxy points a new way forward for the genre: a route that rejects our current obsessions with realism, atmosphere and narrative for something that could only come from the imagination. It’s not a way that all games in this genre should take – and I think it would be a shame if they did. Ratchet and Clank on the PS3, for instance, takes a different tack but still provides a great experience (as we’ll explain in a review coming soon). 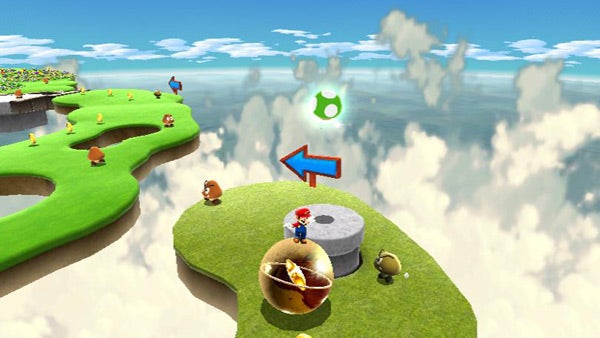 Still, let’s not lose focus on the most important thing. Above all else, SMG is a game that makes you grin like a slack-jawed idiot for hours on end – like someone who has just undergone a lobotomy or watched a whole series of Strictly Come Dancing in one sitting (though with the knowledge that you’ll come back to your senses eventually). Other titles this year have provided more immersive universes or more revolutionary technology, but has anything else this year been this much fun as consistently and over such a long playing time? No. And that’s what the magic of Mario is – and always should be – all about.


Nintendo rewrites the platform rulebook to create a worthy successor to Super Mario 64. On every level, it’s worlds ahead of (nearly all) the competition.