So, the Linksys Velop hasn’t entirely impressed when it comes to features and setup, but one area in which it certainly excels is performance. At least compared to standalone Wi-Fi routers.

Each node of the system is a tri-band dual-stream (2×2) router with MU-MIMO support – or, in other words, they’re fast and powerful with all the latest tech. What’s more, in a similar way to the Orbi, and unlike most other Wi-Fi extenders or mesh router systems, the Velop uses one of its two 5GHz bands for communication between the nodes.

This allows the system to offer far greater speed than conventional extenders with one or two band, as they have to constantly swap back and forth between connecting to the other nodes and to your devices.

Not that all this performance was immediately obvious on initial setup of the Velop system. I tested the system on the top and middle floors of a three-storey, brick-built, semi-detached home. The first node was placed to one side of the house on the ground floor, where the telephone cable enters the house. The other two nodes were positioned at the centre of the middle and top floors.

Testing was carried out at one location towards the back of the house on the middle floor (test 1) and two locations on the top floor – one to the back (test 2), one to the front (test 3). Throughput was measured using LAN Speed Test, using a laptop connected via a wire to the first node and another laptop via Wi-Fi at the test locations. 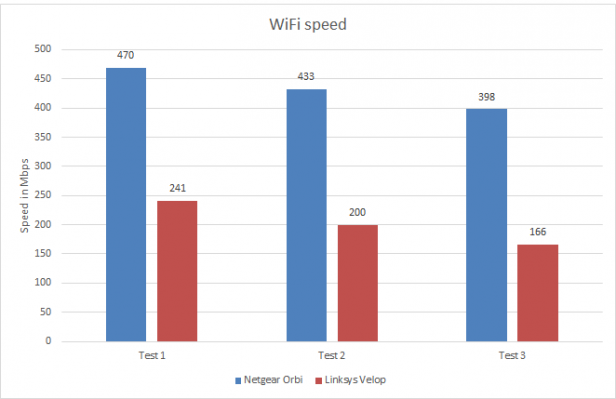 With all three nodes connected, the system achieved a peak speed of 241Mbps in the test 1 location, while in tests 2 and 3 it hit 200Mbps and 166Mbps respectively.

These are very good numbers compared to those a single router would achieve; even a powerful device would struggle to hit over 100Mbps on the top floor. However, they pale in comparison to the Netgear Orbi, which managed 470Mbps, 433Mbps and 398Mbps respectively.

Considering Linksys’ claims, these figures didn’t seem quite right. So, I tested the system again, but this time starting with just one Velop node then with two and three.

With one node, performance was as poor as any other single router. In fact, several other conventional routers can beat its 170Mbps, 107Mbps and 149Mbps scores. However, adding a second node brought the system to life. Performance leapt to 306Mbps, 300Mbps and 295Mbps. That’s still some way short of the Netgear Orbi, but far more in line with what I’d expect. 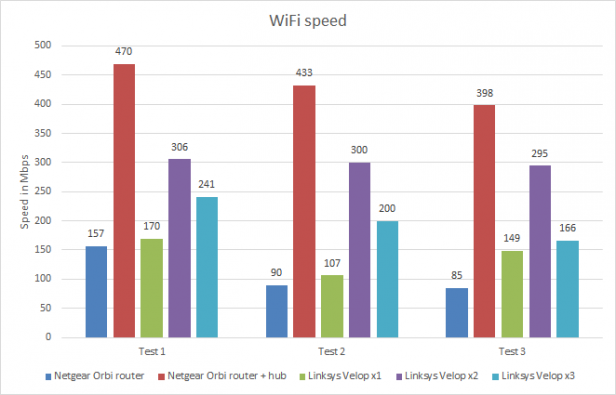 Finally, adding the third node, performance dropped to the levels seen before. This actually makes sense: once you add a third node, you no longer have a band dedicated purely to communication between two nodes, with the backhaul now having to travel back from the third node to the second node and on to the first.

Based on this, I’d recommend starting with a twin pack and then adding another node if your coverage still isn’t up to snuff.

Also, it’s worth noting that shorter range performance is impressive. In our normal single router test scenario (two storey terraced house) a single Velop provided fast and consistent coverage for the whole home, delivering competitive maximum speeds and ample speed even in our furthest test where the router and test laptop are separated by two walls and a floor. 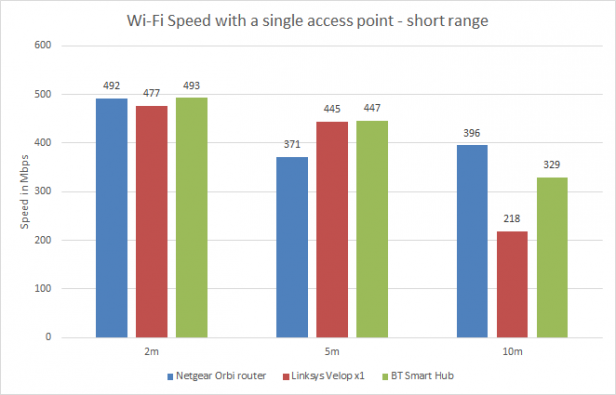 One area where the Velop is unique is its ability to make use of wired backhaul for higher speeds. If you’re starting afresh and remodeling your house, you could feasibly set up a very long network cable that reaches each Velop node. But that rather takes the simplicity out of the whole thing, so this is a niche use case. 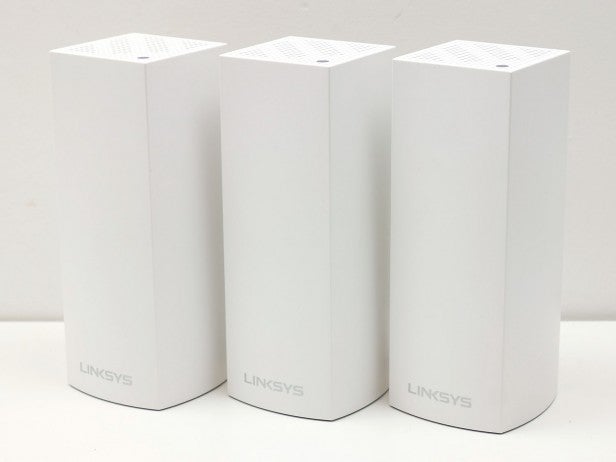 Should I buy the Linksys Velop?

The Linksys Velop gets plenty right. It’s stylish, easy to setup, performance is good, and it entirely lives up to its promise of providing reliably fast and stable Wi-Fi throughout your home, without the need to ever worry about swapping from signal to signal.

However, when stacked up against other whole-home Wi-Fi systems, it finds itself in an awkward middle-ground. Compared to the Netgear Orbi it’s seriously lacking in features, it’s slower to setup, and peak performance is markedly lower. As such, for a two-node system (both systems cost £350 for two nodes) the Orbi is the clear choice.

On the other hand, for larger premises where three or more nodes are required, the Velop is faster than the likes of the BT Whole Home and Ubiquiti systems – but then each of its nodes costs a lot more. For instance, the three-node BT system costs £299, while a three-node 802.11ac Ubiquiti system costs just £220.

If your main priority is just getting reliable coverage then you can get that for far less than what you pay for the Linksys Velop system. After all, both the BT and Ubiquiti systems will still be faster than most broadband connections, and sufficient for streaming HD video around the home.

Ultimately, the Linksys Velop is just too expensive right now. If you could pick up one for £150, two for £300 and three for £400, it would feel far more competitive.

The Linksys Velop is an easy way to get reliable, high-speed Wi-Fi coverage throughout your home. However, its high price means competing systems offer better value.