Few speaker units embody the iLifestyle better than the Libratone Lounge. It’s simple, ridiculously so in some respects, but it’s the simplicity and sheer loveliness of the design that makes it more desirable than many more capable systems. But whether this desirability can make its £1099 price seem like a bargain is another atter altogether…

The Libratone Lounge is as much a piece of lounge furniture as a speaker system. Not because you’re meant to sit on it, but because it’s the kind of thing that will come to define the look of your front room. It’s about as long as a 42in or 50in television, and should ideally be wall-mounted below your tellybox to get the desired effect.

Really, though, it’s just as happy to perch on a mantelpiece or sideboard. As long as it’s at least a metre wide, around 15cm deep and terribly, terribly stylish, the Libratone Lounge will look right at home. It’s partly the thing’s sense of style that will justify a purchase for many – like those willing to spend hundreds or thousands of pounds on a chair because it looks astounding. This isn’t a criticism of such a person – but an indication that you need to care a lot about style or convenience to be a perfect fit for this soundbar.

The quality of materials used here matches its price. It’s made primarily of wood, finished in high-gloss lacquer on the visible top bit, and by an ultra-high quality fabric-covered speaker grille around the front and sides. Not just any fabric is used, either, but thick Italian or cashmere wool. It comes in grey, black, beige, red or green. All are sure to be provocative, because of the unit’s sheer size, but for a real “what on earth is that?” reaction, red and green are the natural top picks.

The way it fits together, the ease with which the grille pops off obligingly, and quite how flawlessly firm the rest of the Lounge is, makes a success of its stylistic statement. It’s big and bold, but quite unlike the standard black and grey boxes of most Hi-Fi equipment.

What it can do is very limited, though. This is primarily an Airplay device, and there’s only one additional input here – a 3.5mm/digital S/PDIF socket. Airplay is Apple’s Wi-Fi streaming standard for iOS devices – the iPad, iPhone and iPod touch – and iTunes. It was introduced in late 2010, but has only really taken in third-party devices with crackers like the Bowers & Wilkins Zeppelin Air and Denon CEOL RCD-N7.

Airplay is dead easy to use, integrated into the interface of compatible Apple devices as well as you’d expect from those user-experience experts. Android phones can get in on the action too, using the DoubleTwist app. If you want to plug in a regular CD or DVD player, you’re probably looking at the wrong slab of wood, because there are no phono inputs here.

Behind the oh-so-fancy grill of the Libratone Lounge is a pretty traditional speaker arrangement. At each end are two 2in mid-range drivers, with a 1in tweeter above them, effectively mimicking what you’d get put placing two bookshelf speakers about 80cm apart. In the centre is an 8in bass driver

What the Lounge effectively does is to jam together two bookshelf or large satellite speakers and a subwoofer. It’s not doing so in a 1m-wide slab of wood that concerns us so much as the 12cm depth, which doesn’t give as much sound for the bass driver’s output to ruminate as a standard sub would. Subwoofers aren’t large just so that they look powerful and impressive, you know.

The arrangement also tells you that this is strictly a stereo system, not a soundbar that tries to recreate 5.1 surround sound in a single box. Libratone does try to get around this, though, by claiming that if offers “360 degree” sound. Clever wording here stops the manufacturer from getting into any hot water about false claims, because it’s merely talking about wide dispersal of stereo audio. However, we imagine several buyers lured into an ultra-fashionable boutique selling the thing might be confused by this, which is a shame. 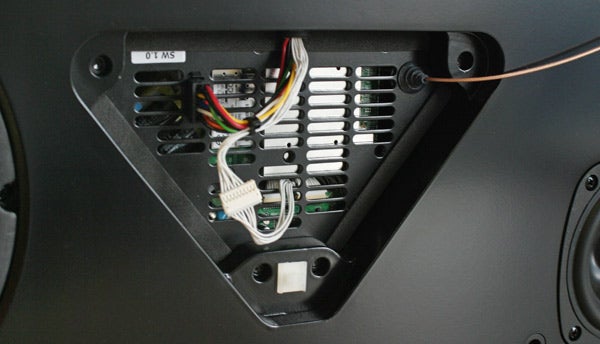 While it’s a good stylistic companion to a great big flat-screen TV, the 2.1 speaker setup ensures it isn’t the perfect partner to films – more on how well it copes sonically later. It works wonderfully with an iPhone, iPad or iPod touch, though. Airplay is very easy to use, transmitting over your home broadband connection, while you can switch between Airplay and the 3.5mm/SPDIF input using the button on the top right of the unit – the only physical control on the device. 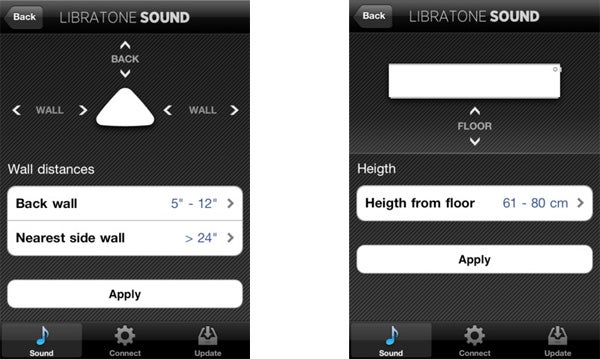 Libratone offers an iOS app that lets you optimise the sound for your room. You tell it how far the Lounge is from the back wall, and how high up it is positioned and it tailors the sound accordingly. This is a very neat feature, but shouldn’t be overestimated.  Bass levels can be optimised, but the positioning of the speakers does not change when doing this – and it’s much easier to perfect a 3-speaker setup than the 6-speaker array you get with a 5.1 system. And, of course, no amount of tweaking will turn poor sound into great sound, if the Lounge can’t provide the goods…

The Libratone Lounge is not a cheap speaker. It costs more than a thousand pounds, which is twice the price of the B&W Zeppelin Air and Arcam rCube, and around £400 more than the rather special Philips Fidelio DS9800. A grand is also enough money to buy an entry-level home cinema receiver and a decent speaker package, such as the Jamo S426. You could also buy 4425 Chomp bars. Yes, we’re going on a bit, but you really have to care about the looks of the Libratone Lounge to make the price remotely digestible.

The sound you get for that price is, like the design, eminently tasteful. It’s refined, balanced, detailed and sweet-sounding. The Lounge can tackle music that would cause harshness in lesser systems thanks to the impressive resolution of its high-end. 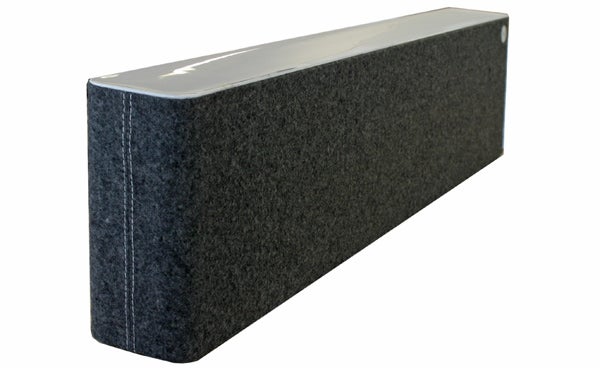 With classical and singer-songwriter type fare, it sounds musical and insightful. However, it’s not perfect across the board. The Lounge doesn’t offer a particularly powerful sound – the bass is reserved and measured, which is fine, but it can’t make rock and electronic music sound exciting or aggressive. Perhaps it’s just too well brought-up – too dedicated to elegance for its own good.

We also found that the maximum volume wasn’t quite loud enough for our tastes. It will fill large rooms, but it can’t blast out tunes at the ear-splitting volumes a proper Hi-Fi can muster. For normal listening, it’s no problem, but if you live in a detached house and like to hold raucous parties, those Libratone Lounge manners may start to annoy. The sound also lacks scale compared to other systems you could get for around half the price.

It’s likely, in part, because of the size of the speaker unit. While the drivers themselves are large enough, there’s little speaker cabinet space here compared with less lifestyle-oriented speakers.

Libratone’s claim of 360-degree sound isn’t pure hokum, though. The Lounge uses standard cone speakers for its main drivers. These are usually very positional, but you can listen to this soundbar from a pretty extreme angle without the sound suffering significantly. The stereo image starts to break up when you get very close to the Lounge – a metre or less – but this is to be expected when the mid-range drivers are the best part of a metre apart.

The Libratone Lounge succeeds in several very important respects. It looks great, it’s very well-made and it’s utterly convenient in both its sound dispersion and overall usability. However, you are paying for this ease and style as much as you are the sound. For a thousand pounds, you can get a much bigger-sounding system.

If you’re not going to tax the Lounge with much more than soothing Norah Jones tracks and Chillout Classics 2010, this is a nigh-on perfect partner. If you want it to rock hard occasionally, or shake the walls from time to time, you may be a little disappointed. Unless you fall in love with its looks, there are much better-value options out there – but we don’t deny this is a lifestyle system worth listening to.

The Libratone Lounge is one of the most impressive-looking Airplay devices we’ve seen. It’s big, but elegant too. And it has a sound to match – refined, elegant and detailed. However, it can’t provide the clout and volume other cheaper audio solutions offer. If looks and convenience are of top importance, the Lounge remains very desirable. But £1099 can go a very long way if you’re willing to compromise a little on either of these factors.