CDs are on the way out, folks. Soon all of our music will be stored in the Cloud and beamed directly to us in invisible ephemeral bursts – and there’s not a thing the vinyl-clutching hordes of traditionalists can do about it. Aside from planting a few bombs in Google’s, Apple’s and Spotify’s HQs. The Denon CEOL is a transition device of sorts, mixing a traditional CD mini system with a roster of connected streaming services. For the real stick-in-the-muds, there’s even an AM/FM radio, though strangely no DAB.

The Denon CEOL bucks the trend of most hi-fi equipment by being all-white rather than black or silver. It leans towards being an acquired taste, especially when the matching SC-N7 speakers are also completely white aside from a grey ring around each driver cone. The Denon RCD-N7 networked music unit is available both with and without the speakers though. 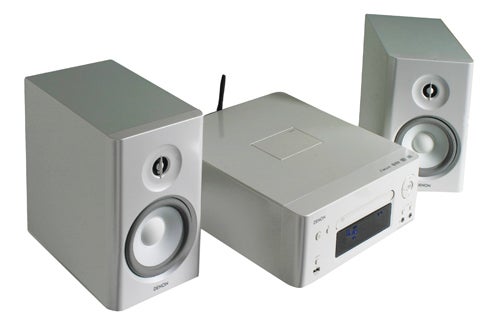 On top of its sizeable frame sits an iPod dock, covered by a simple hinged plastic flap. Unlike some other separates-style hi-fi units, it isn’t designed to be stacked – or, at least, it’ll have to be top of the pile if you want to use the dock.

Other connectivity is excellent, with three additional auxiliary inputs – two phono and one optical – a subwoofer output, Ethernet on the back, while built-in Wi-Fi is included too. On the front are a 3.5mm headphone jack, a 3.5mm line-in input and a full-size USB slot to let you simply plug in external hard drives or memory sticks, from which you can play music. 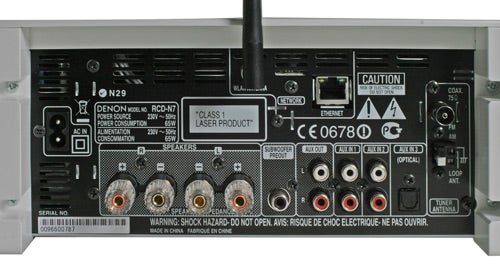 With a unit like the CEOL RCD-N7 though, it’s arguably the Wi-Fi that’s much more important than the physical inputs. There’s an antenna point on the back of the hi-fi, and a screw-in antenna is included as part of the package. Alternatively you can simply plug the CEOL directly into your router using the Ethernet port.

Being able to play music from such a wide variety of sources – over USB, from other music units over the standard connectors, over Wi-Fi or with a plain old CD – positions the Denon RCD-N7 as a device that wants to be at the centre of your home music setup – you could even bolster your TVs audio by positioning the speakers either side of your set.

It supplies 65W RMS of power per channel, making it powerful enough to drive both bookshelf and floorstanding speakers. As such, unless you find a particularly good deal for the full CEOL package with the central units and speakers together, there’s no reason to stick with the matched speakers.

A standard remote control is included in the package. It’s hardly ground-breaking in layout or ergonomics, but does include dedicated buttons for each of the CEOL’s key features, such as Internet Radio, the tuner and CD player.

The Denon CEOL RCD-N7 is a sort of hybrid system. From the outside it looks like a traditional mini hi-fi system, using a standard CD tray and simple 3-line OLED display. However, if this is all you want from a system you might as well opt for a cheaper CD/DAB solution like the Denon DF107DAB .

Connect the CEOL to a wireless network though and it can stream a music library from your PC, from Napster or Last.FM and connect to the thousands of internet radio stations littering the web. It’s a universe of content far more expansive than you’d get from a non-connected system, but it isn’t without holes. 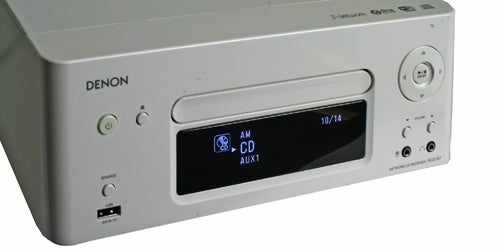 The most glaring of them is the lack of Spotify, which is included in Logitech’s Squeezebox Touch streamer. You can play Spotify through the CEOL using the built-in Airplay feature, effectively streaming content from your iPhone/iPod Touch to the Denon, but we’d much rather have direct access to the service. Access to Naptser, and to a lesser extent Last.FM, somewhat make up for this, but as a free service, Spotify is still one of the most desirable.

We found the initial setup process, of getting the Denon CEOL connected to the Wi-Fi network, to be puzzlingly slow and laborious, but at least the majority of it won’t have to be repeated. As there is no keyboard built into the front controls or remote, you have to scroll through the alphabet in order to input each character of a WEP key, for instance. There was also a surprising amount of waiting around as the handshake between network and Hi-Fi took place, although this may be in part down to our Wi-Fi connection as well as the CEOL.

Once you’ve soldiered through these initial headaches, performance improves hugely. Navigating through menus, using either the front D-pad or the remote control, is quick and content pulled off the web displays near-instantaneously. For iPhone and iPod Touch owners there’s a bonus feature too – the Denon CEOL RCD-N7 is compatible with the Denon Remote App, letting you control the hi-fi completely from your iOS device. 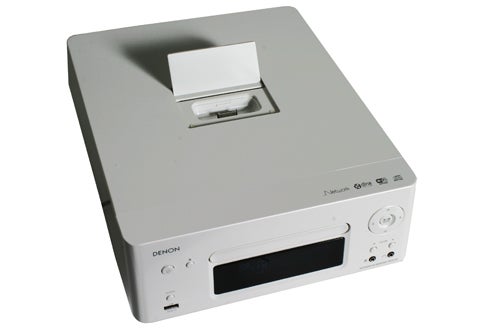 Airplay functionality is flawless too. Airplay is an Apple feature that lets you stream music to compatible devices from your iPad, iPhone, iMac et al. It’s controlled using the Apple device itself, leaving the Denon CEOL as the dumb performer for your music.

Features like Airplay are more successful than the Napster and Last.FM streaming here, because the standard interface methods – the simple display, the remote control and physical front buttons – aren’t perfectly suited for browsing a gargantuan multi-million track library of music, and with Airplay you can avoid using these. That said, the controls are more than capable of handling internet radio or your own streamed music library, where there’s less involved searching required.

Switching between services is blissfully simple too, with a main menu that lists them all in a straightforward manner and those dedicated remote control buttons to speed up navigation even further. The one feature that seems to have been lopped off in favour of the CEOL’s connected skills is DAB radio – which is present in most of Denon’s other CD mini systems. There are arguments both for and against its inclusion but we’d err on the side of wanting to see it included.

With 65 watts per channel on-board, the Denon CEOL is much more powerful than most mini systems. Its potential isn’t fully mined by the matching SCN7 speakers, but the sound is nevertheless impressive.

Smooth, refined and detailed, it blows most iPhone docks and budget mini systems out of the water. Unlike an all-in-one system, the separates approach lets you achieve a great stereo image – when properly positioned – and is arguably more versatile across a variety of different room sizes and shapes. 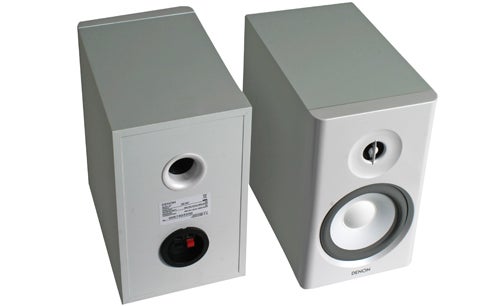 However, with the standard speakers the sound is not particularly bassy – something you’ll notice even more if you usually listen to music with a dedicated subwoofer pounding away underneath the other speakers. This is to be expected of a pair of entry-level bookshelf speakers, and the Denon CEOL gives you plenty of scope for changing the way it sounds. You could pair the base unit with a pair of home cinema satellites and a sub if you wish – for a more subtle look, or a whacking great pair of floorstanders.

Its power rating is closer to a dedicated separates amp than a mini system too, further widening this scope. The only real limitation is that it’s a resolutely 2-channel system, so there’s no home cinema potential here.

If you prefer your music more measured and don’t mind only having a calorie counter’s portion of meat wrapped around its bones, the full speakers plus base unit can be found for as little as £50 more than the speaker-free edition. And that’s not a bad deal at all.

The closest rival to the Denon CEOL is the Marantz MCR603, another connected CD player from a top hi-fi manufacturer. However, we can’t help but compare these systems to Logitech’s Squeezebox range and the Sonos series. These two long-running ranges outclass the Denon CEOL in terms of online streaming services, offering access to more services and a control interface that’s much better suited for the frequent text seaching that’s involved when using a service like Napster or Last.FM.

Plus of course both Sonos and Squeezebox offer Spotify integration – the number one streaming service to include beyond simple internet radio. The obvious point being that you will likely still need a hi-fi system to actually playback what a Sonos or Squeezebox delivers. Will Denon catch up? We’d like to think so, but unless you have an iPhone or iPod Touch, you’ll still be left with the slightly clunky physical fascia button/remote control navigation.

The Denon CEOL successfully melds a traditional separates mini system with some of the top connected services, bundling-in some of the most popular connected sources including internet radio, Airplay and Last.FM. It stands out as a good all-in-one solution in a fairly underpopulated space, but is shown up by less hi-fi-oriented names like Squeezebox – who have managed to tailor their connected experience over a longer time.