Pressing the ‘Mic’ button on the Magic Remote calls up LG’s voice recognition system,
joining similar systems offered by Panasonic and, most notably, Samsung.
Interestingly, LG’s voice system doesn’t offer you control over your
TV; rather it just allows you to verbally input terms into the TV’s
content search engine. An engine that covers everything from the VOD
services carried by LG’s Smart TV platform to YouTube and the Internet.

This
approach to voice interaction actually makes perfect sense to us, as it
stops the voice recognition system from getting too complicated or
‘invading’ parts of the TV’s functionality where it really doesn’t need
to go.

The system recognised pretty much everything we said to
it accurately, and the presentation of the results is attractive. It’s
great, too, that unlike Samsung’s Smart TV system, you can see instantly
when a search result appears which source that option is available
from, and how much it might cost you if it’s available via a pay per
view platform.

It’s
important to add, too, that as well as supporting searching for
specific films, TV shows, actors and so on, LG’s online platform carries
a recommendations system activated, for instance, just by saying ‘show
me recommendations’. 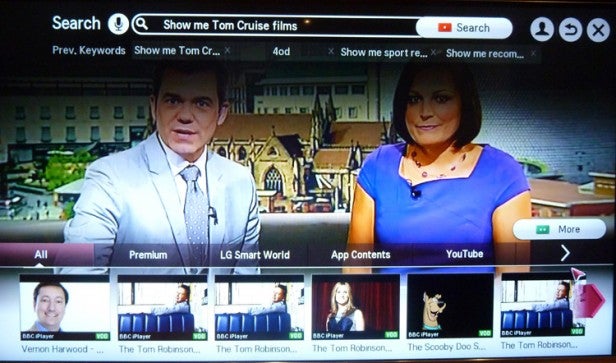 This
recommendations system joins similar systems on the latest Philips and
Samsung smart TVs in that it bases its recommendations not just on
promoted content but also on an analysis of your own live TV viewing
history. It’s more sophisticated than the Philips engine, and while it
only seems to offer recommendations from VOD sources (Samsung’s system
also provides recommendations picked from the EPG listings), it does
interestingly also take the ‘Like’ history from your friends into
account if you sync your TV up with social networks.

LG’s
recommendation system seems to take its recommendation results from a
slightly larger spread of on-demand content providers than Samsung’s
system does. Particularly great is the inclusion of the BBC iPlayer in
its results.

While LG’s list of ‘connected’ search engine sources
seems more extensive than Samsung’s, though, its results are sometimes
pretty questionable, even when your voice has been correctly recognised.
For instance, requesting Tom Cruise films actually resulted in Tom
Robinson occupying most of the first search result slots… 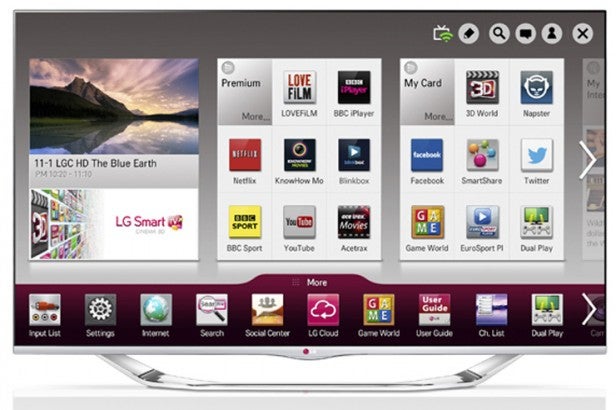 Another
issue is that as the search engine doesn’t look at enough on-demand
content providers. At the time of writing it seemed as if the only
significant players connected to LG’s system were the BBC iPlayer,
Acetrax and YouTube. And if you’ve been following the news lately,
Acetrax will actually have closed for business by the time you read this
review.

As
with Samsung’s content search engine, it’s a real shame LG hasn’t
currently managed to get LoveFilm and Netflix connected in with its
search engine. Indeed, until these two big UK content providing hitters
are included, it seriously limits the Recommendation feature’s
real-world usefulness.

Still, with the basic infrastructure up
and running, it’s probably only a matter of time and deals before the
scope of the search feature is indeed extended as we want it to be.