So far we’ve somehow managed to avoid talking about the onscreen Smart
TV interface LG has introduced for 2013 – even though it’s actually a
very nice system indeed for the most part.

Rather than splitting
its content over multiple home ‘hub’ screens like Samsung and Panasonic
do this year, LG’s approach is to populate a single hub with various
themed content ‘folders’ or cards providing direct links to associated
content.

The
default set up for these folders finds a Premium folder up first
containing all the key online video service providers contained on LG’s
platform; then there’s a 3D World folder providing direct access to
streamed programmes on LG’s own 3D World channel; a Smart World card
providing access to information-based apps and LG’s Cloud (more on this
latter app presently); Game World aggregating all the games carried by
LG’s platform; and Smart Share, which shows stuff collected from your
connected mobile devices, PCs and USB drives.

A
maximum of three of these folders is shown on screen at any one time,
so that the icons can be kept large and easy to select using the magic
remote. You scroll along between pages of folders just by moving the
cursor to the left or right side of the screen. 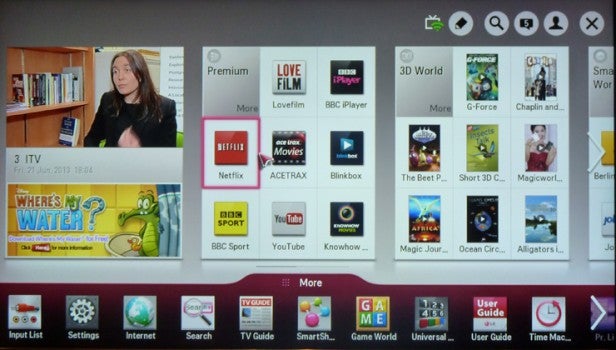 The
opening Smart page also happily shows a shrunken version of the TV
programme you were watching when you hit the remote’s Smart button. We
were a bit annoyed to find a fairly large advert box beneath the TV
screen, though; we really don’t see why we should have to suffer ads
when we’ve paid so much for a TV – especially as the ads inevitably
occupy space that could be filled instead with extra content shortcuts.

One
other niggle with the Smart Hub layout is that if you scroll right to
access the extra content shortcut cards/folders, the TV screen
disappears. Surely it would have been better if the TV screen had been
locked permanently in position at the left of the screen while the
content folders scrolled separately, without forcing the TV picture to
disappear.

Each folder/card on the Smart hub shows eight direct
links on the home hub screen, with other options available by selecting
the ‘More’ tab at each folder/card’s top left corner.

Add
to these folder/card link icons a row of further feature and content
shortcuts along the menu screens’ bottom edge and you’ve got a system
that looks busy, showcases lots of apps you might not have seen if
everything was tucked away in submenus, and delivers plenty of direct
content access all without ever looking cluttered or confusing.
Excellent.

As with Panasonic’s excellent My Home Screen
interface, moreover, LG has provided a simple interface for creating
your own folder/card of links. However, rather bizarrely you’re only
able to import links from a very limited list into this personalised
card. You can’t, for instance, choose which video content providers you
want to have on your home card, or your preferred games.

We
guess LG could excuse this by saying that since you need to scroll past
the other themed cards to get to your personalised one you’re going
past all the main content folder/cards anyway, and so can get to content
in those folders/cards quicker without having to move to your
personalised menu. But personally we still think many users would have
appreciated being able to create their own folders from ALL the apps
available. 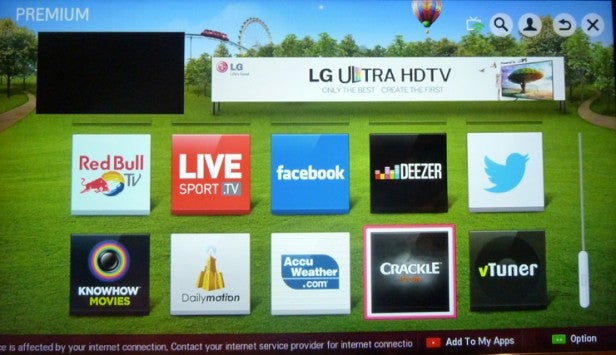 While
we can see ways for further improvement of LG’s Smart TV interface in
the future, though, we need to make it absolutely clear that the
combination of the attractive, content rich menus, solid degree of
personalisation and brilliant intuitiveness of the magic remote make
LG’s Smart interface seldom less than a joy to use. Especially as the
system proved both robust and reasonably fast during our tests – a
pleasingly far cry from the rather buggy smart platforms LG has launched
in past years.

That’s it for part 1 of our exploration of LG’s
new Smart TV platform. In part two we’ll be running through the
platform’s content, and the startling number of ways LG has provided for
enabling you to access content across a range of devices.

Used as the main TV for the review period
Tested for more than a week
Tested using industry calibrated tools, discs and with real world use
Tested with broadcast content (HD/SD), video streams and demo discs
Previous
Voice Recognition and Recommendations Review Next
Apps and Video Content Review