With
many TVs we’ve seen this year really upping the smart TV ante with both
their content and interfaces, there’s some serious pressure on LG – the
last of the big-name brands to show its new 2013 Smart TV hand – to
keep up with Joneses. But with enhancements to the amount of content on
offer, as well as lots of new ways of accessing content – including
voice recognition, NFC support, and a brilliant new ‘magic remote it
just might have the answers it needs. 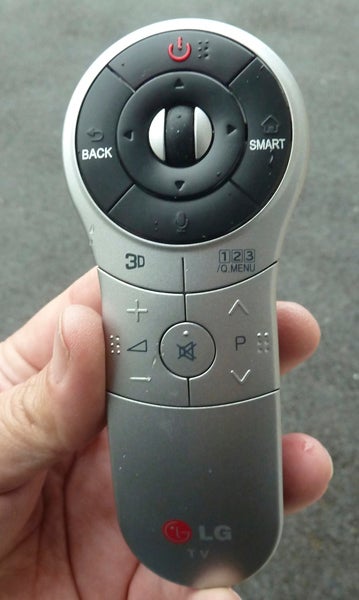 Our
first port of call is LG’s new Magic Remote. Shipped free alongside a
standard remote with every new model in LG’s range from the LA660V
upwards, the Magic Remote proves a brilliant alternative method for
streamlining and simplifying your use of the TV’s Smart and standard
features.

Three
key points make the Magic Remote so effective. First, it’s a universal
remote, and so can be used for taking over control of other parts of
your home cinema system. Second, it lets you navigate, Nintendo Wiimote
style, the onscreen menus simply by pointing the remote at the right
part of the screen. More on this presently.

Third, it features a
vastly streamlined button count versus the standard remote, which sticks to the most important functions. Anything else is accessible using the ‘Virtual Remote’ button that brings up an on-screen version of the main remote to access the function you want by pointing at the screen.

The LG Magic Remote’s most eye-catching feature is the scrolls wheel. This
wheel provides you with a brilliantly tactile and extremely fast way of
scrolling through menu lists, as well as allowing you to select options
by pressing it in.

You can even use it to quickly spin through channels
while watching the digital tuner. The only issue we’d have with it is
that it only spins vertically, while some of the menus it works with are
arranged onscreen horizontally, leading to some slightly unintuitive
moments.

The ‘point and click’ aspect of the magic remote really
does work brilliantly. The pointer is activated simply by picking the
remote up or shaking it around a bit, and it responds with outstanding
speed and accuracy to your movements of it. It’s configured, moreover,
so that you can cover the entire area of the screen, from one side to
the other, simply by flexing your wrist. There’s no need for any tiring
full-arm gesture nonsense.

Despite
the small movements needed to cover a large expanse of screen area,
though, the system is precise enough in its responses to make sure that
it’s not at all difficult to finish your motion with the onscreen cursor
perfectly positioned over the option you want to choose.

This
all makes for a much more intuitive way of selecting options from LG’s
graphically rich menus or surfing web pages than using a standard
remote. 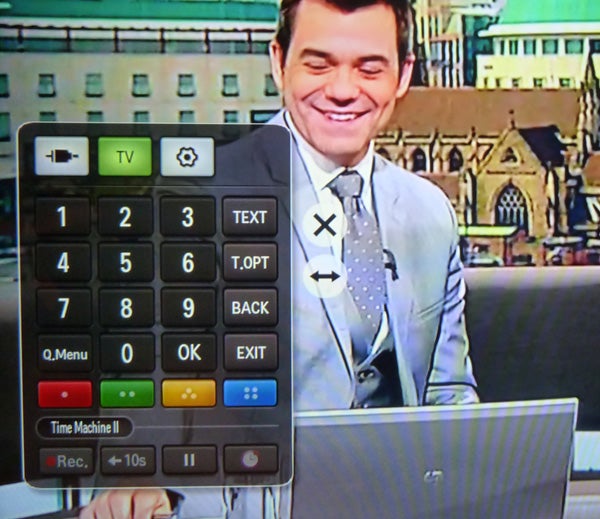 It’s
worth adding that LG’s new TVs do also support gesture control using
your hands, like Samsung’s top-end TVs. This is standard on LG TVs with
built-in cameras, otherwise it only becomes possible if you add an
optional USB camera. However, the system isn’t as comfortable or
effective to use as the magic remote, so you’ll likely only ever even
think about it if you’re one of those people who’s forever losing their
remote controls.

Used as the main TV for the review period
Tested for more than a week
Tested using industry calibrated tools, discs and with real world use
Tested with broadcast content (HD/SD), video streams and demo discs
Next
Voice Recognition and Recommendations Review