So far LG’s Smart TV system has impressed with its intuitive Magic Remote and search features, but the real acid test is the quality of apps and content available.

Where
content is concerned, on one level – the sheer number of apps available
– it’s extremely impressive. By the time you’ve taken all the games,
utility, infotainment, and video streaming apps into account there are
literally hundreds of different apps to choose from.

Of course,
having so many apps around could be confusing. But as well as the main
card/folder interface discussed earlier proving effective in helping you
shortcut your way to the sort of apps you like, LG has done a great job
this year of making sure that the submenus for each folder are also
attractive, clean and helpful, keeping the search and browsing processes
logical and clean.

We
do, though, question the quality of some/many of the apps LG’s Smart
platform is populated with. It seemed to us that a pretty high
percentage of them are beyond trivial, totally rubbish, or both. This
entirely confirms our long-held that pretty much the only apps that
really count on a Smart TV platform are those devoted to video; the rest
are mostly just filler.

So how does the LG platform stand up when we focus on video? Decently is probably the best way to sum it up. 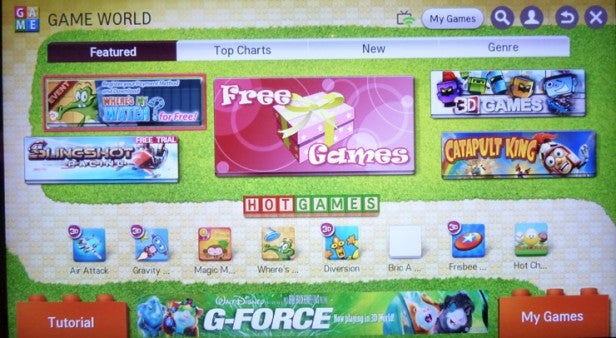 In
the Premium card/folder are links to LoveFilm, the BBC iPlayer,
Netflix, Acetrax (though this will soon be gone), BlinkBox, BBC Sport,
YouTube, and KnowHow Movies. Clicking through on the More button adds
Skype, Naspter, EuroSport Player, Redbull TV, Live Sport TV,
DeezerCrackle, and Daily Motion – as well as the inevitable Twitter and
Facebook apps.

This is a solid effort, but you can’t ignore the
fact that Samsung additionally carries the key 4oD, Demand 5 and ITV
Player catchup services.

Another
small niggle on this secondary Premium content list is that the ‘TV’
box at the top left doesn’t keep playing your TV channel, but is instead
given over to an LG video advert before just sitting statically with
the LG logo in it. 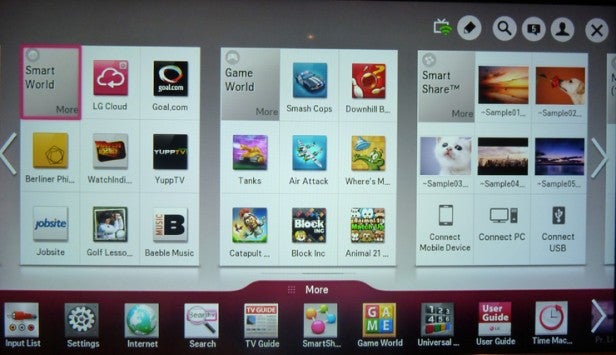 The other main video streaming source is in
the card to the right of the Premium one: the 3D channel. And actually
as well as containing more content than we’d expected, the quality of
some of this content is also surprisingly strong. Rather than just
being populated by lots of weird documentaries and quirky stuff chiefly
sourced from Korea as was the case last year, now you can find such
reasonably ‘major’ things as a full 3D concert from Kylie Minogue’s
Aphrodite tour, Walt Disney’s G-Force movie, and The Lord of the Dance
with – coo! – Michael Flatley.

It
has to be said that we did experience a few streaming pauses on our
consistent  6Mbps broadband feed with this 3D content, but hopefully LG
will be able to improve the robustness of its streams over time.