The last part of LG’s Smart TV proposition for 2013 we need to look at
is its support for phones and tablets, or second screen as they’re often referred to. And this is mostly another success
story for the Korean brand.

For
starters, the number of ways for connecting secondary devices to your
TV is impressive. There’s the normal DLNA route, of course, which can
work directly from within the TV’s internal interface or via LG’s
Android and iOS LG TV Remote app.

The set also supports the
DLNA-based Miracast system, so that you can network the TV with
Smartphones and tablets without needing an external router connection.

Many
smart LG models also support NFC tagging; you just put an NFC sticker
provided with the TV somewhere convenient, and ‘touch’ your NFC-capable
second device to that sticker whenever you want to mirror your device to
your TV screen.

Finally you can connect your phone to the TV
using an MHL (Mobile HD Link) cable so you can play back content on your
phone on the TV screen in HD, and even control the phone via the TV’s
Magic Remote. Using this cabled mode means your phone is charged while
it’s connected, too. 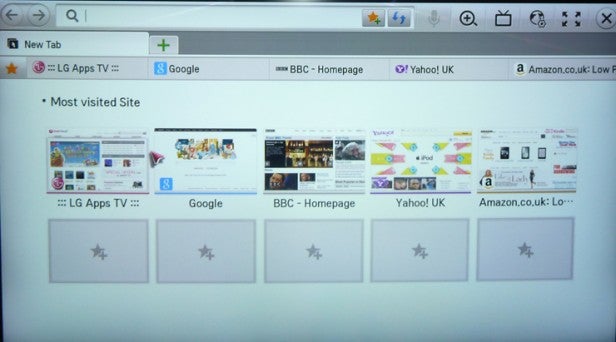 Exploring
LG’s latest TV Remote Android/iOS app, it’s nice to find that unlike
Samsung’s Smart device support, LG has managed to get all of its key
features into a single app. This app takes a little learning your way
round in navigational terms, perhaps, but it’s attractively presented
for all that, and actually proves pretty easy to use after a few minutes
of experimentation.

Linking your smart device to the TV is
exceptionally easy. You just fire the app up, press device scan, and
provided your LG TV is on it will instantly appear in the app window.
Then you just select the TV’s icon, enter into your smart device the six
digit code that appears on the TV screen, and that’s it. You’re
connected.

The
highlight feature of the TV Remote app is ‘Mini TV’, whereby you can
mirror what’s showing on the TV – so long as you’re watching the
Freeview tuner and not one of the AV inputs – on your Smart device. This
worked very well on our iPad, with decent picture quality and no
stuttering (though it’s a shame LG doesn’t provide twin-tuner support
for the feature like some rival brands do).

However,
Mini TV wouldn’t work on a resident Sony Xperia Z Android phone. Though
it does work on other Android devices – depending on which model of TV
you’ve got… We’ve requested a full device update from LG, and will
update this review here with the information if it’s forthcoming.

We
have to say, though, that we hate this sort of confusion. Obviously
it’s arguably mostly Android’s fault for not really being a platform at
all in the same unified way iOS is, but we still think it should be a
basic requirement of brands that make Android apps for their devices to
ensure the app delivers the same level of functionality to every Android
device. Otherwise you’re effectively penalising people for the type of
phone or tablet they’ve elected to buy. 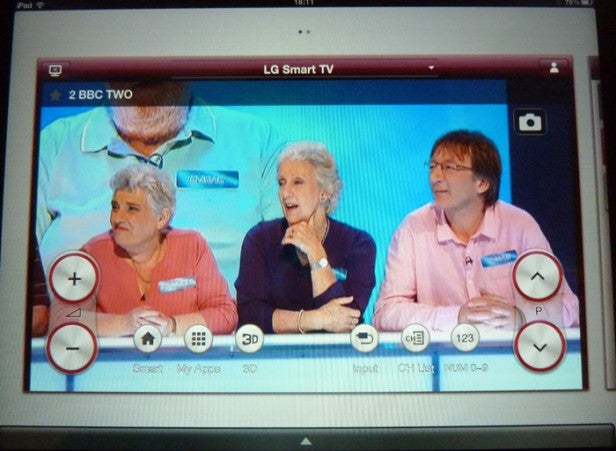 Anyway, rant over, let’s quickly explore the rest of the TV Remote app’s
features. One really cool one is the facility to take a snapshot of
what’s playing on the Mini TV screen and attach it to a tweet or
Facebook post – all from within the app.

Also
highly useful is the way that pressing the Smart icon on the app home
screen calls up the Smart hub on the TV and a touch pad control system
on your Smart device for handily shifting the onscreen cursor around.

Actually,
pressing most of the other buttons on the App interface also calls up
the same on-TV smartscreen menu/smart device swipe control screen
combination, a repetitive approach which perhaps feels a little
unsophisticated.

The homescreen also features ever-present
buttons for changing volume and channel, while the swipe control screen
also features a button that turns the pad into a game controller.

Swipe
left from the app home screen and you get to a Mini Home menu. This
rather brilliantly presents you with access icons for all the services
found in the Premium and My Apps (the apps you’ve got set along the
bottom of the Smart TV screen) sections of the Smart Hub; just press an
icon here, and the relevant feature will fire up on the TV. 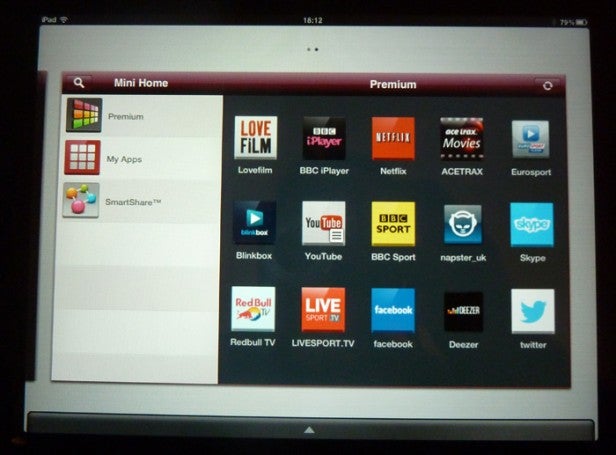 Actually,
in a couple of cases – YouTube and Netflix – you can use the app on
your Smart device first to find what you want to watch on the service’s
servers before sending the ‘play this’ command to the TV. Such ‘off-TV’
browsing is always hugely appreciated.

Also present on the Mini
Home screen is a link to a cutely presented SmartShare interface for
sharing your own video, photo and music multimedia content with the TV.
Again, being able to browse for stuff first on your second screen before
calling the TV into play is a hugely useful, family-friendly touch.

Overall,
it’s difficult to see how LG could have done much more with its smart
app – aside from delivering uniform functionality across Android
devices, of course!

Used as the main TV for the review period
Tested for more than a week
Tested using industry calibrated tools, discs and with real world use
Tested with broadcast content (HD/SD), video streams and demo discs
Previous
Apps and Video Content Review Next
Verdict Review