The LAS550H is a mid-range 2.1 soundbar designed to add muscle to your movie nights. With 320W of power under the bonnet and a wireless subwoofer in tow, it offers the ideal antidote to the weedy audio performance of today’s TVs – and with built-in Bluetooth, it doubles as a music system too.

Its slim design and wall-mounting capability mean it won’t take up lots of living room space. It isn’t the cheapest soundbar around, but true to form LG has packed it full of features for the money. Let’s find out if it’s worth a punt.

The LAS550H is a devilishly good-looking soundbar. Squeezed into a curvy silver cabinet that narrows towards the back, this eye-catching speaker is in danger of upstaging your TV. The silver caps at both ends add a splash of glamour, while a row of four flush buttons on top is the only trace of clutter. It curves round in a single, seamless surface; the speakers peer out from behind a perforated metal mesh.

A dot-matrix display on the front spells out the currently selected input, but flicks to volume and setup messages when prompted by the remote.

We’re impressed by the LG’s excellent build quality. It’s weightier than the majority of soundbars at this price and boasts a solid fit and finish across the entire cabinet. There are rubber pads on the bottom for tabletop placement, but you can also wall-mount the bar using the supplied kit.

A recess on the rear houses a useful line-up of sockets, including HDMI input and ARC output, optical digital input, 3.5mm mini-jack input and a USB port that lets you play music files. They’re outward facing, so an angled HDMI adapter might be in order when mounted on the wall. 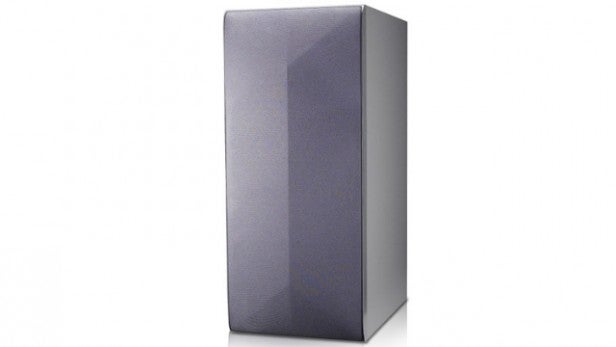 The subwoofer is styled to match the soundbar, sporting an attractive silver finish with the same “3D cube” pattern featured on the BP550 Blu-ray deck. The front-firing woofer hides behind a cloth-covered front panel, with an LED on the front that indicates the unit’s power status. It’s wireless, so you don’t have to worry about placing it near the soundbar, which is a godsend in small or unusually shaped rooms.

There’s on-board decoding for Dolby Digital and DTS, plus a series of sound presets – Standard, Music, Cinema, Flat, Boost and Treble/Bass. Each mode tweaks the EQ in different ways to suit the material. Boost reinforces the mid-range and Treble/Bass emphasises the high and low frequencies. 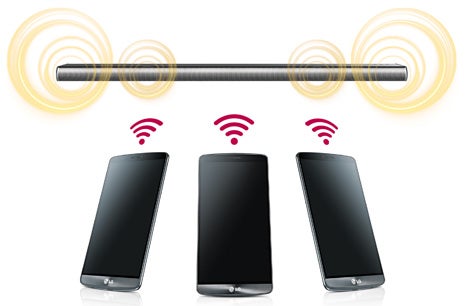 The LG is equipped with Bluetooth 4.0, which brings with it a series of nifty functions. Download the Music Flow Bluetooth app and you can link up to three devices simultaneously, as well as controlling the soundbar and using the app’s Gracenote-powered Mood Station to find songs that match your mood or activity.

You can play hi-res music files up to 192kHz/24-bit through the Music Flow app or from USB storage.

Using the LAS550H is a breeze. Having a text-based readout on the front is extremely helpful, as you can gauge volume levels or sound adjustments without having to decode blinking lights as you do on some soundbars.

It’s controlled by a compact remote that keeps clutter to a minimum and makes it easy to find frequently used functions. The rubber buttons are clearly labelled and click satisfyingly when pressed.

Hit the EQ button and you can adjust the bass and treble levels, while the Sound Effect key toggles through the sound presets. The volume keys towards the top are shaped like plus and minus symbols, which is a fun touch, plus all of the sound functions (DRC, Night, Auto Volume, AV Sync, Sleep and Auto Power) get dedicated buttons. On the downside, the Bluetooth controls in the middle didn’t work with our iPod Nano.

If you’re not a fan of LG’s unit then you can control the soundbar through your existing TV remote, or LG’s Music Flow Bluetooth app on your smartphone. It’s simple to operate thanks to the menu structure’s clear, logical flow. 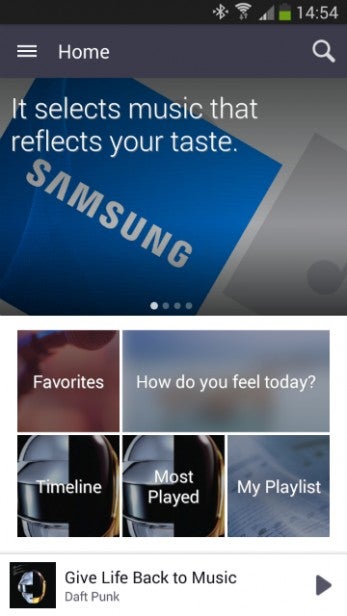 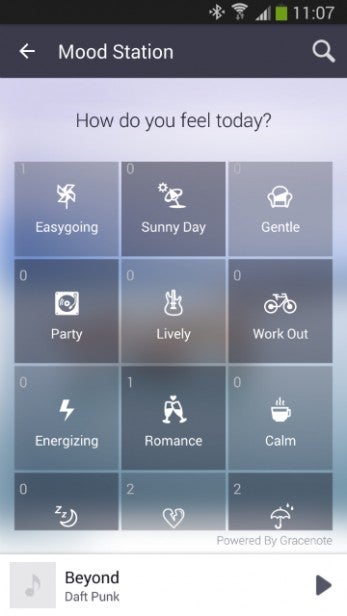 The funky homepage features a series of square panels jazzed up by cover art. Hit the “How do you feel today?” panel, select your mood and the app finds any tracks that fit the bill. Alternatively, you can create playlists or choose favourites. During playback it expands to full-screen with a bank of controls at the bottom – volume, track skip, pause. You can even send a tweet about the track or post to Facebook. 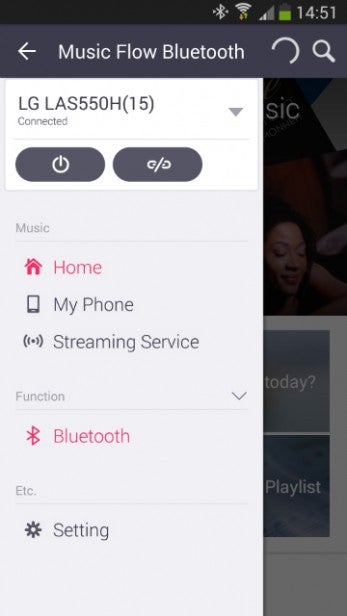 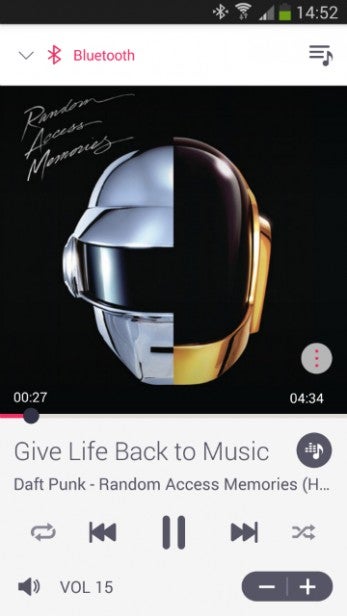 Swipe your finger from the left on the homepage and the menu bar lets you to jump between sources or change the settings. Here you can activate the Multiplay “party” mode, where up to three devices can be connected. When you press play on one device the other cuts out, which could lead to punch-ups when you have a bunch of mates round with clashing musical tastes. In fact, the smartphone app kept cutting the audio from our second device whenever we touched anything on-screen, which gets a bit annoying.

A “Streaming Services” option raised hopes that apps such as Spotify could be accessed through the app. Unfortunately, they can’t – the message telling you to “register music apps on your phone” is a cop out.

Play a movie and the LAS550H offers that classic LG sound – crisp and attacking, with plenty of bite in the mid-range. It’s not particularly smooth or refined, but it’s certainly exciting. It only occasionally sounds harsh when you push the volume to neighbour-goading levels.

As a result, action movies such as Captain America: The Winter Soldier are a real thrill ride. As the Winter Soldier attacks Cap and friends on the freeway, the LG reproduces the shattering windows, screeching tyres and colliding cars with real gusto. Explosions have an aggressive edge, and when the Winter Soldier’s goons pepper the overturned bus with bullets, you’ll duck for cover as they resonate through the room.

There’s plenty of volume, too, and excellent mid-range clarity means you don’t miss any dialogue, whether it’s Robert Redford’s hushed tones or villains barking orders over a volley of gunfire. It lacks the insight and high-frequency polish of hi-fi soundbars from Q Acoustics and Philips, but the LG’s treble is crisp enough to make the soundstage feel open and detailed. 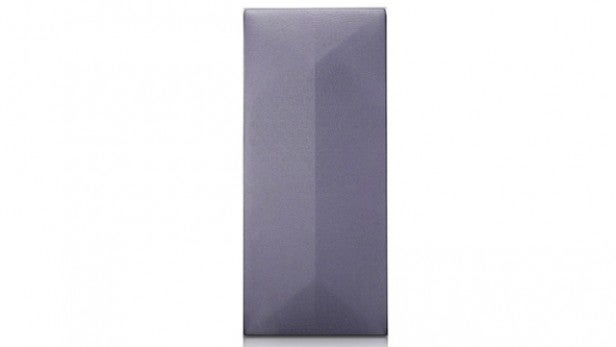 The LAS550H is let down by a lack of firepower in the bass department, however. With a dedicated powered sub on board, we expected bigger, weightier low frequencies. Sure you can hear it rumbling and popping as cars explode and guns fire, but it lacks room-filling presence. In addition, its inability to counterbalance the prominent mids and highs leads to an uneven tonal balance. It’s neither unpleasant nor unbearable, but it’s something that will ultimately prevent the LAS550H from challenging the best soundbars at this price.

Activate Cinema mode and bass receives a distinct boost – in fact, we recommend using Cinema mode for everything except music – but it still doesn’t give us the visceral, floor-shaking experience we expected at this price.

TV material fares much better. The LG articulates the witty dialogue of Sky 1’s Yonderland clearly, while the subwoofer’s subtle bass output lends depth and atmosphere inside Negatus’ lair. The LAS550H also makes a decent music player, handling tunes with pleasing detail and clarity in the mid-range. The subwoofer does a much better job with drums and basslines, revealing itself to be more rhythmic and agile than its movie performance led us to believe.

The LG steps things up with the hi-res version of Daft Punk’s Random Access Memories via USB. The LG’s spirited handling of the crisp disco-funk drums, guitars and basslines makes for an enjoyable listen.

LG has created yet another stylish, user-friendly soundbar with generous connections and nifty features – not least the new Music Flow Bluetooth app and support for hi-res music.

However, it lacks the room-filling bass power needed to turn a good performance into a great one. If we were spending this sort of cash on a soundbar we’d check out the Philips HTL5140 or slightly pricier Q Acoustics M4 first – both of which deliver a deeper, weightier sound.

LG’s dashing, feature-packed soundbar is scuppered by its lack of bass clout with movies. In all other respects, however, it’s an impressive proposition