The HTL5140 pairs a slim soundbar with a wireless subwoofer to pump 320W of audio power into your living room, handing a P45 to your TV speakers in the process. The bar’s slinky form factor not only makes it a breeze to install on a wall or TV stand, but also makes a minimal impact on your precious space, plus the wireless sub can be placed wherever’s most convenient. 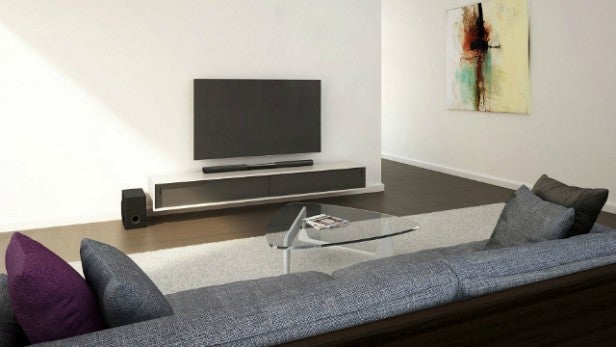 Unusually, the Philips HTL5140 soundbar comes in three pieces that have to be slotted together and screwed in place. Once assembled they form a slender speaker bar measuring 49mm high by 66.5mm deep, making it remarkably discreet and easy to accommodate. Its 1045mm width suits our black 55-inch Samsung set down to the ground, but we think it’ll go well with any TV above 32-inch. 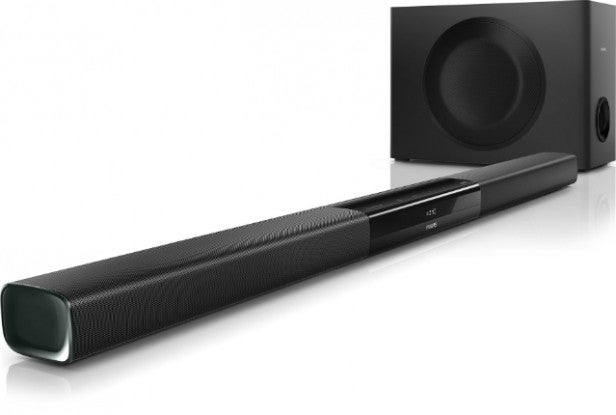 It’s beautifully made and attractively styled without going overboard. The two speaker sections are crafted from black aluminium with glossy metallic caps at both ends. The central section contains an alphanumeric display and a row of touch-sensitive controls on top for power, volume and source selection. The display is large and easy to read, but can be dimmed if it gets too distracting in the dark.

The rear section offers a useful range of connections. There’s a HDMI 1.4 input and output (the latter supporting Audio Return Channel), optical digital input, a 3.5mm minijack input and a USB port. The HDMI ports will pass through 3D signals but not 4K.

The recess for the HDMI sockets is fairly tight, so you’ll need bendy cables that can be guided through the opening. The USB port is also buried deep in the back, but there’s an adapter in the box that makes it easier to connect devices.

The soundbar uses a two-way design, with two racetrack woofers and a 1in Mylar tweeter for each channel, the latter ensuring ‘incredible sound definition’ according to Philips. The subwoofer boasts a single 8in woofer and is claimed to deliver 220W of power, combined with 100W from the soundbar.

Built-in Bluetooth with support for apt-X and AAC makes music streaming a breeze, and NFC connectivity simplifies the pairing process with compatible Android devices (the touch point is located on top).

The USB port enables you to play music files – MP3, WMA, AAC and WAV – from flash drives, and helpfully the track name appears on the front display during playback.

The HTL5140 will decode Dolby Digital and DTS bitstreams fed into the HDMI or optical input, and there’s an array of sound modes to spice them up. Philips Virtual Surround Sound attempts to replicate the effect of a 5.1-channel system through the stereo speakers using ‘highly advanced spatial algorithms’. There are six presets – Powerful, Balanced, Bright, Clear, Warm, Personal – that tweak to EQ to suit different tastes and material.

You’ll also find lip-sync adjustments, a dynamic range booster for night-time listening, auto volume – which keeps loudness on an even keel – and dedicated Bass and Treble controls (from -4 to 4).

With three sections to screw together, installation obviously takes a little longer than most soundbars, but it’s no hassle. To use ARC you’ll have to make sure CEC is enabled in your TV’s setup menu.

The excellent remote makes day-to-day operation a doddle. The rounded back end sits comfortably in the palm and the buttons are sensibly arranged, with keys for each input at the top and prominently-placed volume controls. There are dedicated controls for every sound adjustment towards the bottom too, which makes it easy to optimise the sound to suit your taste – particularly as you can gauge your adjustments on the clear front display.

The HTL5140 follows in the footsteps of Philips’ fabulous Fidelio E5 with a hugely impressive performance, offering a more powerful and sophisticated sound than you might expect for the money.

The best part is how this slim speaker can product such a rich, full sound. It makes light work of Godzilla’s massive action sequences, injecting them with waves of deep, punchy bass while exploding buildings and screeching monsters are reproduced with bite and precision.

As the MUTO (Massive Unidentified Terrestrial Organism) escapes from the nuclear power plant, its footsteps fill the room with a huge thump, while the rumbling bass and clanking metal make it feel like the toppling cranes are about to fall on top of you. The sense of scale displayed here is impressive for a soundbar that’s barely wider than its own remote.

Admittedly, most of the system’s fullness comes from the beefy subwoofer, but unlike other slim soundbars that leave a big hole in the midrange, the Philips’ strong mids integrate seamlessly with the subwoofer – resulting in a balanced and cohesive sound from bottom to top.

The HTL5140 also ekes out lots of fine detail. As the Special Ops team creep through the jungle on Oahu, the Mylar tweeters tease out the sea of chirping insects and the delicate rustle of the soldiers’ footsteps in the grass. High frequencies are clear and natural throughout.

Listeners who like to crank up the volume can rest assured that the HTL5140 doesn’t go to pieces – mids and treble remain clean and easy on the ear.

If we’re being picky the subwoofer could be more agile with fast staccato sounds and can be heavy handed at loud volumes, even at the lowest -4 setting. It flaps when the line of airplanes explodes at Honolulu Airport (you could dry your hair on the air coming out the front port) but none of this will ruin your enjoyment of action scenes.

Dialogue is clear and life-like, with good detail and subtle bass support for deep voices. The surround mode doesn’t bring much to the table besides a little extra width – we much preferred Stereo mode’s more focussed approach. Flicking through the presets proved fruitless as the differences are subtle, but we were more than happy to leave it in ‘Auto’. 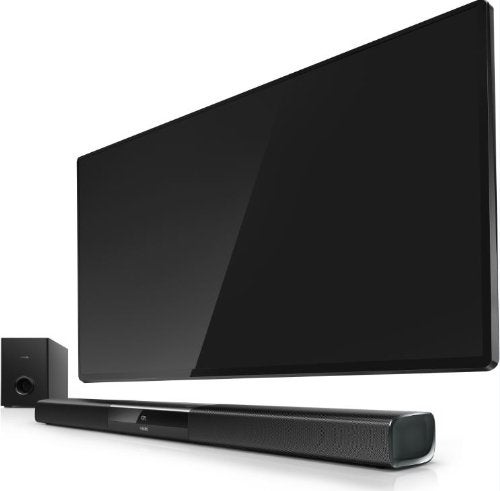 The HTL5140 is stylish, well made and easy to use, but importantly it delivers a very entertaining performance with movies. Its sound is big, detailed and cohesive, with tight integration between the soundbar and sub. The latter is a bit overpowering at times, but overall its room-filling sound is impressive, particularly when you consider the slim dimensions of the soundbar. At under £250, that equals superb value for money.

Philips’ slim, chic soundbar delivers sensational sound and generous features for a reasonable price, making it a terrific option for anyone tired of tinny TV speakers.