What is the Arcam Solo bar & Solo sub?

The Solo bar marks Arcam’s first foray into the booming soundbar market and as you might expect it’s aimed squarely at audio connoisseurs. With luxurious build quality and components derived from Arcam’s high-end AV receivers, it aims to deliver a more fulfilling sound than the majority of soundbars on the market.

Inevitably, such luxury comes at a price – particularly if you add the wireless Solo subwoofer for an extra £500 – but if its performance lives up to Arcam’s usual high standards it could be money well spent.

Arcam has fashioned a fine-looking soundbar with build quality that easily justifies the money. The solid aluminium enclosure boasts the sort of heft and rigidity missing from budget soundbars, helping to prevent and dispel resonance. 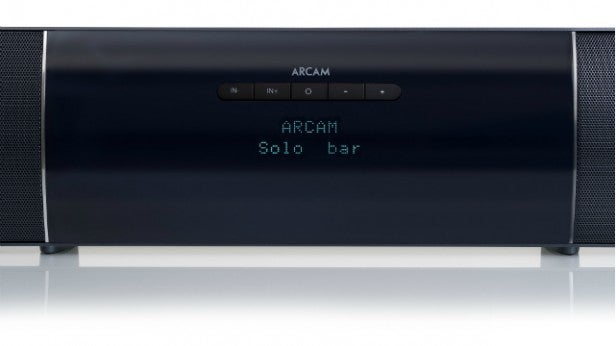 It’s not a showy soundbar by any means, but exudes sophistication from top to bottom. Viewed from the front, two large speaker grilles flank a central panel containing a row of buttons and a large dot-matrix display that spells out inputs, volume levels and audio formats. The panel’s glossy black finish and silver strips add a touch of elegance, while the big, curvy back-end gives Kim Kardashian a run for her money. 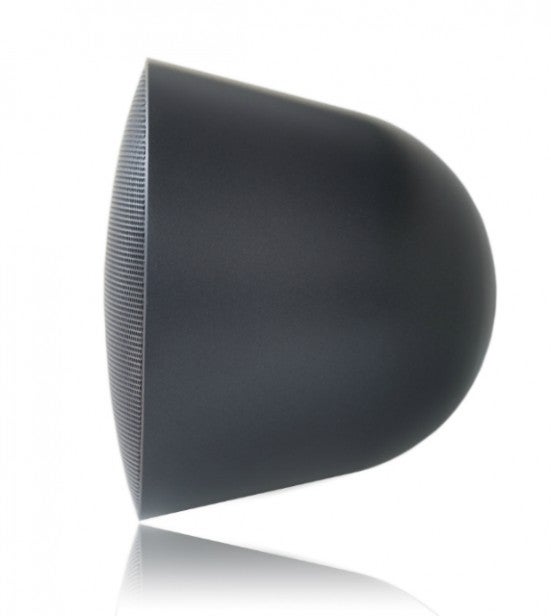 On the downside its bulky dimensions place more demands on your space than some soundbars, and at 130mm high it covers up our TV’s IR sensor when placed on top of the stand – but there’s an IR repeater function to combat this.

The bar measures 1000mm wide, which looks perfect in front of a 55-inch TV but silly with anything below 40-inch. You can mount it on the wall using the keyholes on the back. 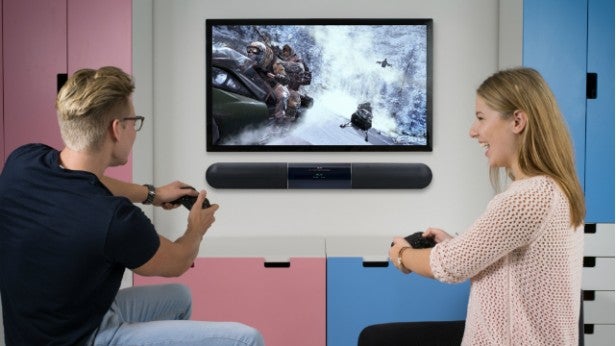 Sheltered in a recess on the back is a very generous line-up of sockets, including four HDMI 1.4 inputs – the most we’ve seen on a soundbar – and an ARC-enabled output. They pass through 3D and 4K signals, and interestingly will support 4K up to 60Hz at 4:2:0 colour space. Arcam says it’s the only soundbar to offer this, as other bars only pass 4K video at 30Hz 4:4:4 colour space. 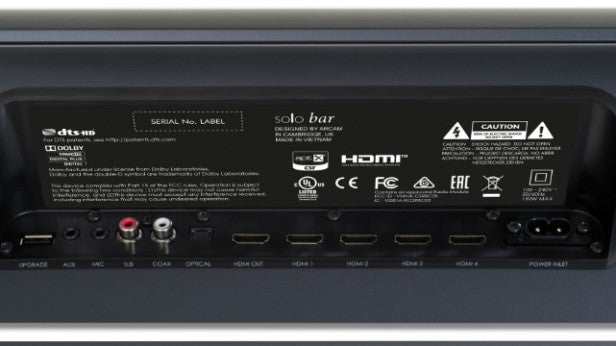 These HDMIs are joined by coaxial and optical digital inputs, a 3.5mm minijack input and a subwoofer output should you prefer to hook up the Solo sub (or another sub) via cable. A socket is provided for the supplied microphone, part of the built-in automatic setup system, and there’s a USB port which is for updates only. The position of the recess allows all cables to hang down when the bar is wall-mounted. 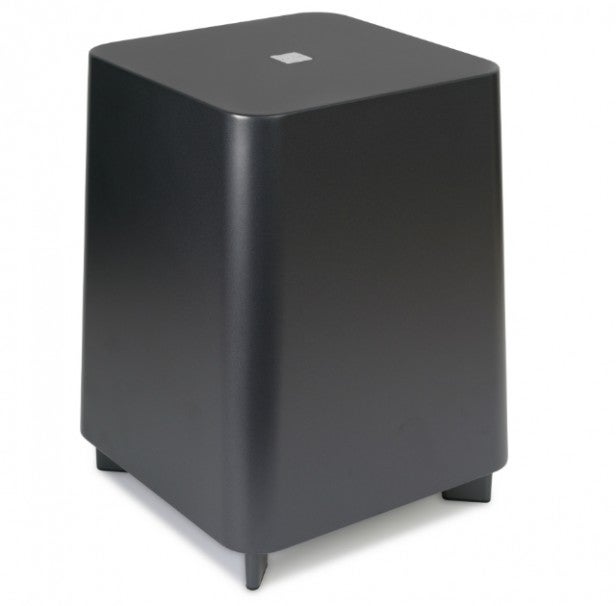 The Solo sub is styled with equal panache, sporting a dark grey matte finish and curved corners. Its tall, imposing size makes it hard to hide away, but it’s so stylish we wouldn’t mind having it out on display. 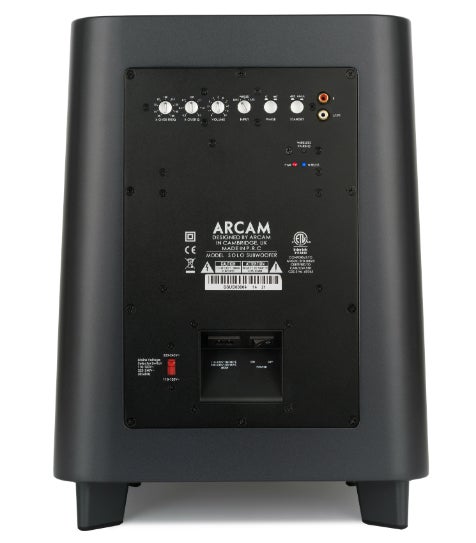 Arcam makes the most of its extensive HDMI connectivity with hi-res Dolby True HD and DTS HD Master decoding, offering the best possible sound quality from Blu-ray discs. This is a rare feature among soundbars. 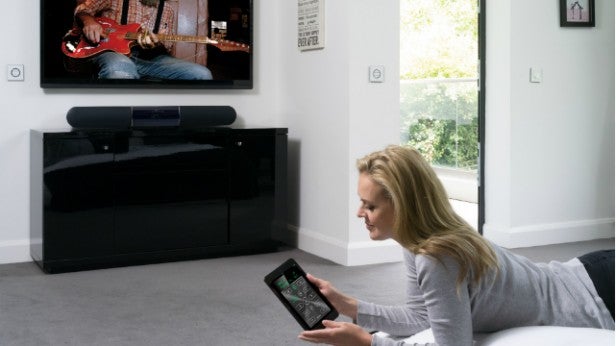 Built-in Bluetooth with aptX means you can stream music from phones and tablets, as well as sending sound from the bar to Bluetooth headphones – ideal for late-night listening. 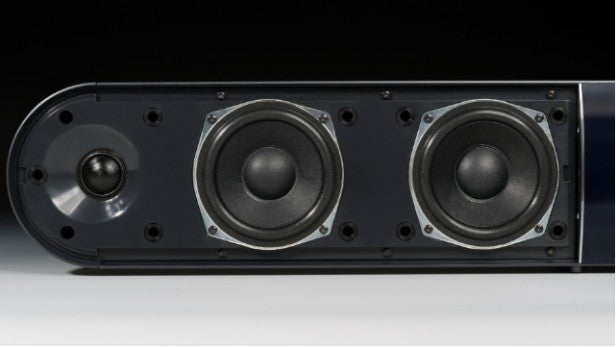 The Solo bar is a stereo affair and uses four 4-inch mid/bass drivers (two on each side) and two 1-inch tweeters, which are angled outwards to achieve a wide dispersion. The mid/bass drivers receive 40W while the tweeters receive 10W, resulting in a total power output of 100W. The sub is equipped with a 300W amp and a down-firing 10-inch woofer.

Processing is kept to a minimum. There are Movie and Concert modes, the latter adding some spatial effects, but the Arcam is all about clear, faithful stereo sound.

Some soundbars rely on cryptic blinking lights to impart information but the Solo bar’s front display panel gives you a clearer indication of its status. It houses a full setup menu, where you can explore HDMI, EQ and system settings.

You can also launch the auto setup feature here. The Solo bar uses the supplied microphone and test tones to set the appropriate speaker levels and crossover frequency with the sub, as well as rectifying resonant frequencies in the room using filters. Again this is a rarity.

The sub doesn’t pair automatically when you fire it up – you have to link it in the setup menu (a light on the back of the sub glows solid blue when connected). Once paired, the sub reconnects whenever the Solo bar is turned on. 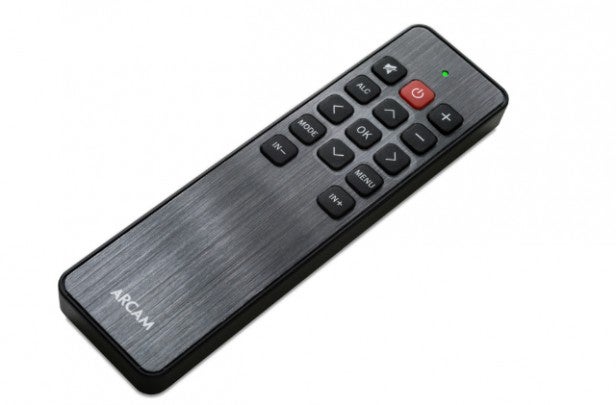 There are two ways of controlling the Solo bar. The old fashioned way is to use the supplied remote, which is slim and black with a small selection of square rubber buttons. Helpful button placement and clear labelling allows for intuitive navigation through the setup menu. 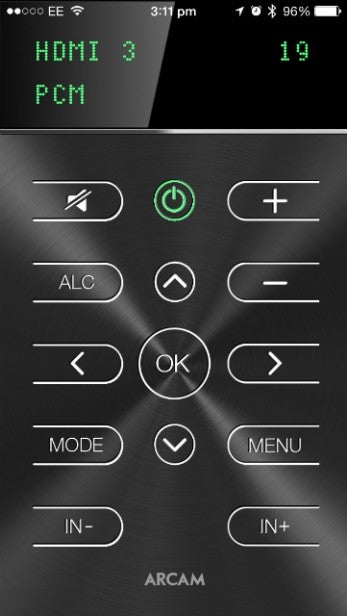 The other method is to download the Solo bar app onto your Android or iOS phone and use its virtual controls. It’s a slick and attractive app, although in terms of functionality there are no advantages over the physical remote as it simply replicates the buttons.

After spending a while in Solo’s company with a selection of movies and music, we were generally impressed by its sound quality. It bears the hallmarks of Arcam’s rich audio heritage, presenting every source with honesty and allowing sounds to emerge clearly without any group of frequencies taking priority over another.

This results in a smooth, well-balanced sound but with enough bite to make movies exciting and involving. Crank up the volume and the Solo bar fills the room with a vast soundstage, without resorting to distracting surround processing (which rarely works anyway). Arcam’s no-nonsense stereo approach gives you a direct and focused output. The Movie and Concert modes add little – stick with Stereo and you’re onto a winner.

With Guardians of the Galaxy on Blu-ray, the intergalactic battle scenes are a real treat. As the Guardians invade the Dark Aster, huge spaceships zoom around the room and swallow you up in their roaring engines. Effects move swiftly and accurately across the front, explosions are solid and dialogue is consistently clear. Solo also teases out plenty of detail, from the delicate beeping and clicking of spacesuits to the husky texture of Drax’s voice – all of which makes for an absorbing listen.

You can also turn the volume loud without any major signs of struggle – just one of the advantages of buying an £800 soundbar. Plasticky budget bars are prone to colouration and booming at loud volumes, but the Arcam’s solid cabinet and high-quality drivers keep such distortion at bay. 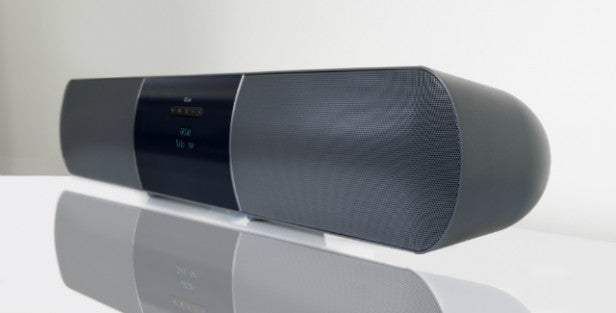 Any negatives? Well if we’re being picky, we weren’t blown away by the Solo’s bass output when playing movies. Arcam says you can use the bar without a subwoofer, but without one it fails to deliver the deep low frequencies so essential to the home cinema experience.

Sure, its bass performance knocks any TV or budget soundbar into a cocked hat and it’s terrific for music, but we expected more – particularly as rival soundbars from the likes of Paradigm and Q Acoustics deliver richer, meatier bass without a sub in tow.

That means a subwoofer is essential, but we’re not completely sold on the Solo sub either. When connected to the bar wirelessly, it lends weight to action scenes but stops short of chest-thumping, subterranean bass.

We tried experimenting with different positions, tweaking the volume and turning the auto EQ off, but nothing we did quite hit the spot. By way of comparison we rigged up a Monitor Audio Silver W-12 sub we had lying around the test room and there was a significant step-up in slam and scale.

However, the eureka moment came when we switched the Solo sub to a wired connection. Bass notes became thicker and punchier, resulting in harder-hitting explosions and a larger soundstage. What’s more, it’s well integrated and the woofer follows rapid gunshots with expert timing. All of which is great news, but it means you sacrifice the convenience of the wireless connection.

There are no problems when playing music though – it soon becomes apparent that Arcam designed this soundbar bar as a music player first, movie machine second. Its neutrality pays dividends, offering a finessed and faithful reproduction of our MP3 collection via Bluetooth.

Vocals are natural and detailed, while instruments that sound thin and strained on lesser soundbars, such as muted trumpets and saxophones, are clean and realistic. The sub locks tightly to basslines and kick drums without booming or overhang. This is one of only a handful of soundbars we’ve heard that deliver hi-fi sound on a par with a dedicated two-channel system. 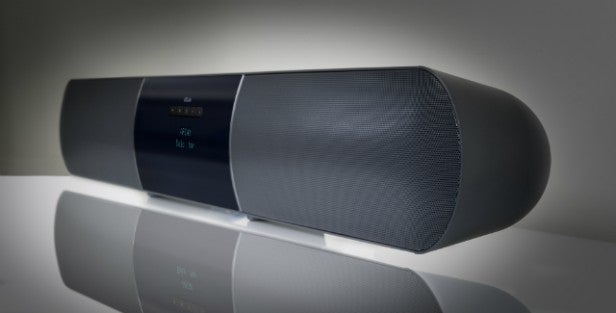 Should I buy the Arcam Solo bar & sub?

The Solo is undoubtedly a great soundbar, ticking every box possible feature-wise and delivering a natural and exciting sound, which is particularly well-suited to music. It also looks the part in its curvy black cabinet, which is built like a tank to keep resonance at bay.

Its four HDMIs are the most we’ve seen on a soundbar and the inclusion of HD audio decoding is a godsend for fans of hi-res movie sound. For these reasons, the Solo bar justifies its lofty asking price and is highly recommended for those who can afford it.

However, a subwoofer is essential for movie playback and we’re just not convinced that the Solo sub is the best option. The wireless connection is convenient and its bass is reasonably weighty, yet it fails to deliver the deep, thumping low-frequencies we expected. It does, however, improve over a wired connection and is much better suited to music playback, lending a tight, agile foundation to any tune.

Arcam’s classy soundbar backs up its sparkling performance with bags of features and sublime build quality, although you might want to investigate some alternative subwoofers before splashing out.