With Ultra HD Blu-ray on the horizon, regular Blu-ray decks are an endangered species. But with disc and player prices plummeting as a result, there’s never been a better time to buy. Plus, features that were once reserved for top-end machines can now be found on the cheapest budget decks. Options such as Wi-Fi, smart content, DLNA streaming and 3D can now be yours for peanuts.

A case in point is the LG BP550: a modestly priced mid-range player from LG’s extensive 2015 line-up. This compact disc spinner comes in at under £100, but offers everything you could possibly want from a Blu-ray deck – except for 4K upscaling, that is. Even better news is that it’s compatible with LG’s Music Flow multiroom system, allowing you to stream music from CD and USB to LG systems around the house.

At only 270mm wide, the BP550 is a compact unit, making it ideal for placement where space is tight. The black styling is attractive but unusual: the casing is covered in a textured pattern that looks like an MC Escher painting up close, featuring rows of little cubes that play tricks with your eyes. The bodywork is light and plasticky, but that’s to be expected at this price.

The minimal front panel sports a slim disc tray, a USB port and just two buttons: standby and open/close. There’s a small LED that indicates whether the deck is on or off. The rear panel sports an HDMI output, an Ethernet port and a coaxial digital-audio output – an interesting choice given that most sound systems offer optical inputs, particularly soundbars and bases.

The BP550 lets you access a superb range of premium content, the highlights of which are Spotify and Sky’s Now TV. These can’t be found on players from other manufacturers and so help LG to claw back some ground over Samsung and its market-leading online content. Both services require a subscription, but with it this deck becomes a convenient way of accessing music and video content through your living-room system.

The BP550 can be used to access videos, music and photos from servers on the same network. File support is dependent on the server software used, but the LG supports MKV, XviD, AVI, WMV, 3GP and MOV videos, plus MP3, WMA, WAV, AAC, FLAC and OGG music files.

The BP550 can also transmit music from CDs and USB sticks to LG’s Music Flow audio systems via Wi-Fi. This is useful if you want to listen to CDs in rooms without a disc player. We’ll explore this in depth in our forthcoming review of LG’s HS7 audio system, but it worked flawlessly when we tested it.

Private Sound mode is another useful feature. It sends audio to your smartphone or mobile device via Wi-Fi, so you can enjoy it on headphones without disturbing anyone – ideal for late-night movie sessions.

Away from the fancy stuff, the BP550 does all the basics such as Dolby TrueHD and DTS HD Master Audio decoding, 3D playback and DVD upscaling to 1080p. It lacks 4K upscaling and Miracast, but these are available on the identically priced Panasonic DMP-BDT370.

Using the BP550 is a slick and hassle-free experience. Whether you’re skipping through folders in a music server or punching passwords into the setup menu, the deck responds swiftly. We also love the look of the menu system, even though it’s the same as that on last year’s players. 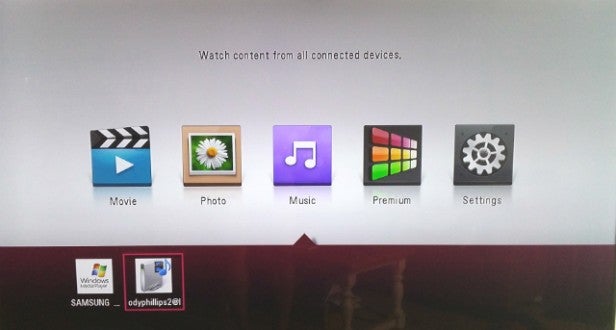 The home menu is engaging and easy to comprehend, featuring a row of five large tiles against a grey backdrop. Highlight one of the tiles and corresponding apps or servers appear in the purple section at the bottom. Select Settings and the intuitive menu puts all the crucial adjustments within easy reach. 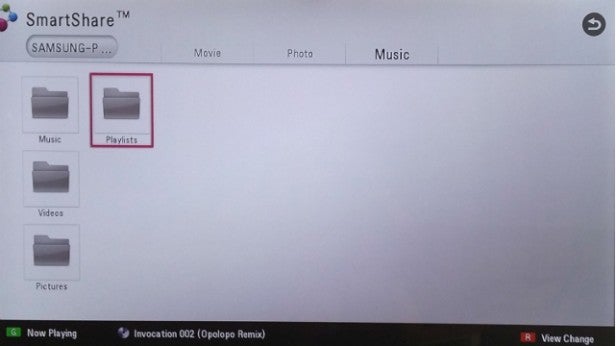 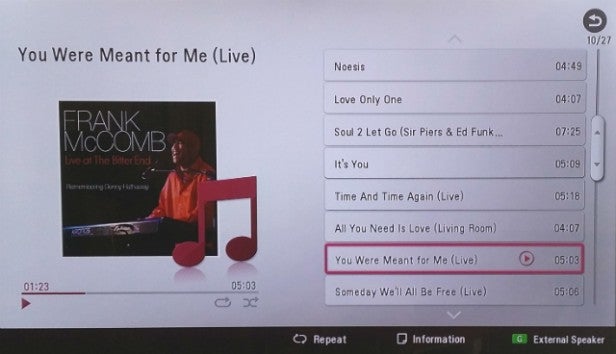 Delve into a DLNA server and you can navigate to your content through a series of folders, spaciously laid out on each page. Start playing a track and it expands to full screen, showing cover art alongside the playlist and elapsed time. 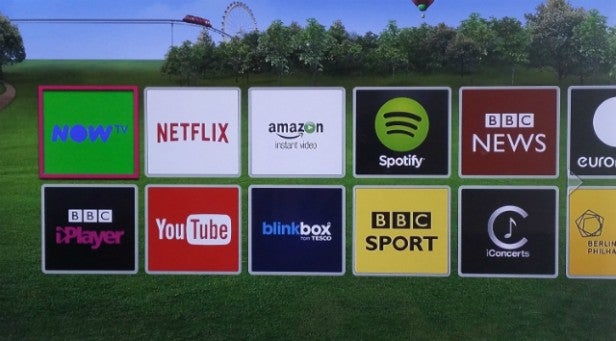 For its online content menu, LG uses a grid of tiles over a cartoony backdrop of a park. It looks great, and unlike some players, the cursor jumps from app to app without any hesitation. We fired up several apps including BBC iPlayer and Spotify and both worked smoothly, streaming content without any stutter or drop-outs.

Hit the Info button during playback and a banner appears at the bottom of the screen, allowing you to access the Disc and Option menus. The latter displays information about the disc (audio formats, subtitles and so on) and offers a series of picture presets including Standard, Vivid and Movie. There’s also a User setting that lets you set the levels of contrast, brightness, colour and sharpness.

The supplied remote is a pleasure to use thanks to its easy, intuitive button layout. The playback keys are placed on a “hump” and helpfully glow in the dark – useful if the lights are off. The other keys are sensibly arranged and clearly labelled, while the large direction pad makes menu navigation a breeze. 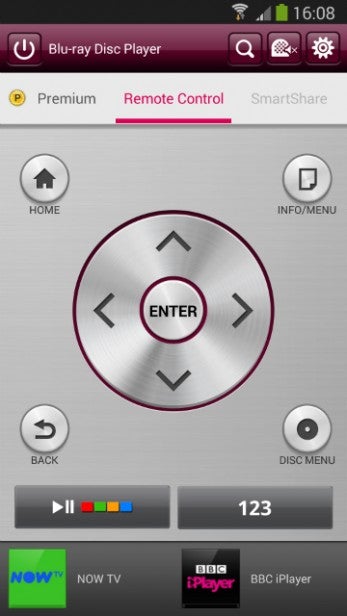 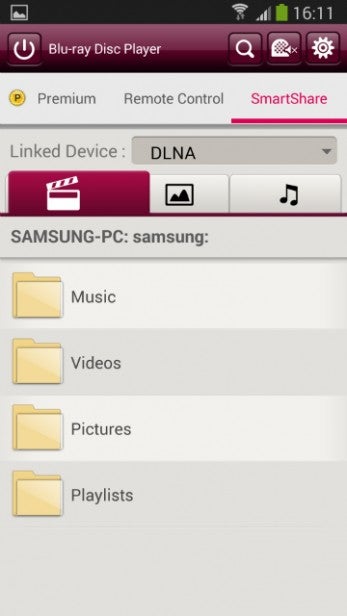 Alternatively, you can use your smartphone to work the player thanks to LG’s Remote App for iOS and Android. It works brilliantly, allowing you to control playback, access apps, explore DLNA servers and stream tracks to Music Flow systems. The layout is clear and funky, using the same graphics and colour scheme as the player’s onscreen menus.

Load a Blu-ray disc and the BP550 delivers punchy, pristine pictures. Watching The Amazing Spider-Man 2 is an eye-popping experience, thanks to the flawless reproduction of detailed New York cityscapes and intricate textures such as skin and fabric.

Strong colours – such as Peter and Gwen’s purple graduation capes and Electro’s neon-blue face – are rendered with depth and vibrancy. More complex tones such as skin, grass and skies look natural and nuanced. Darker scenes, such as Harry Osborn visiting his dad on his deathbed, remain perfectly watchable thanks to excellent shadow detail and perfectly judged contrast. You can make out facial features and small background details amid the gloom.

This is a film filled with fast-moving objects and hyperactive camera work, and the LG reproduces everything without a trace of judder, blur or instability.

None of this comes as a great surprise, since the LG is merely delivering data to your TV via HDMI like all Blu-ray players. However, LG’s picture presets and adjustments do have an impact on picture quality, so for the best results leave it in Standard mode.

The LG also does a fine job when upscaling DVDs – we tried it in our faithful copy of Se7en. Gloomy images look crisp and solid, with minimal artefacts. Some visible jaggies and some gauziness in places mean the images aren’t as clean and sharp as those produced by the Panasonic DMP-BDT370, but it does a decent job.

In terms of disc loading, the BP550 is fairly quick. We tested how long it takes to get from an open tray to playing the first piece of video. With The Amazing Spider-Man 2, the BP550 took 30 seconds (including the battery meter that loads up before the main menu). Terminator Salvation loaded in 29 seconds, which is faster than most players, while Robocop took 15 seconds.

The BP550’s solid HD pictures and excellent network features make it £100 well spent. The highlight is the inclusion of Spotify and Now TV – which you won’t find on any other Blu-ray player – backed up by slick DLNA streaming, Music Flow multiroom support and a superb Remote App. Its attractive, compact design is also a plus, making it ideal for use in the bedroom as well as the living room.

Only two things would make us think twice – the Panasonic DMP-BDT370 offers 4K upscaling and Miracast for the same price, while Samsung’s players offer a better range of catch-up TV apps. But if none of these features takes your fancy then the LG won’t disappoint.

LG’s great-value Blu-ray deck is a no-brainer for Spotify and Now TV subscribers. It’s easy to use and delivers sizzling hi-definition pictures – but some similarly priced decks offer a bit more for the money.