What is the Q Acoustics Media 4?

The Media 4 (or M4 for short) is Q Acoustics’ first soundbar and arrives with the promise of ‘class-leading sonic performance’. Such hyperbole would normally be dismissed as marketing fluff, but when it comes to Q Acoustics we’re inclined to believe it. We awarded its 7000i and 2000i 5.1-speaker packages a maximum 10/10 by virtue of their stunning sound and sumptuous designs, and on that basis our expectations for the Media 4 are sky high.

The company’s dedication to audio purity – hearing the sound exactly as its creators intended – was the driving force behind the success of the 7000i and 2000i systems, and it takes the same approach here, offering straight-up 2.1-channel sound free from meddlesome sound modes and processing. But is that enough to earn it the attention of buyers already bombarded by cheap and cheerful soundbars from bigger-name brands? Let’s investigate.

First up, the Media 4 is a solidly made unit. A manual inspection of the cabinet reveals the use of high-quality materials from top to bottom, like a textured matt top panel and tough metal speaker mesh, all fused together faultlessly. The cabinet is hefty and robust, exactly the sort of physical properties you want from a speaker, with chunky rubber feet on the bottom to absorb vibration.

It’s not the most elegant soundbar we’ve clapped eyes on, though, and nor is it the smallest – at 142mm deep by 90mm high it’s a chunky customer – but the understated black styling keeps it as low-key as possible.

The back end houses two keyhole fixings that enable you to hang the Media 4 on the wall. The sockets are located on one of the sloping rear edges, giving you a bit of room to plug in cables when wall-mounted. 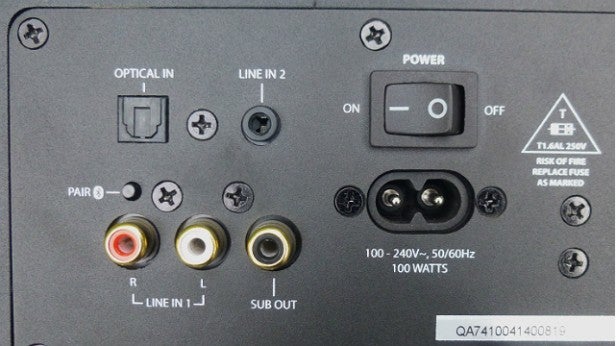 The lack of HDMI sockets means everything has to come through your TV via the optical digital input, but there are two analogue inputs (RCA and 3.5mm minijack) for external kit, plus an output for an external subwoofer. Q maintains you won’t need one, but it’s nice to have the option.

The performance-focused Media 4 is more concerned with drivers and amplification than fancy features, although it does boast Bluetooth 4.0 with aptX Lossless, which supports HD Audio up to 96KHz/24-bit. It even features NFC, which makes it easy to pair compatible Android smartphones – just tap it on the NFC logo on top. It remembers up to eight devices so you don’t have to pair them every time. 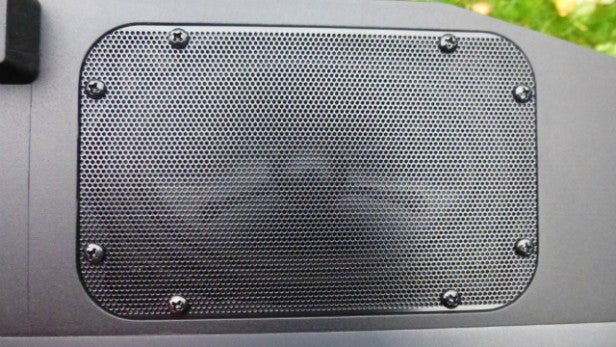 The left and right speakers use 65mm x 65mm Balanced Mode Radiator drivers, noted for their wide dispersion, which delivers a decent sound no matter where in the room you sit – used to great success by the Cambridge Audio Minx TV. Bass is bolstered by a built-in 120mm x 150mm twin-coil subwoofer (above).

Power is quoted at 100W, with 2 x 25W for the front channels and 50W for the sub. The sound is fine-tuned by high-precision digital filters in the on-board digital signal processor. 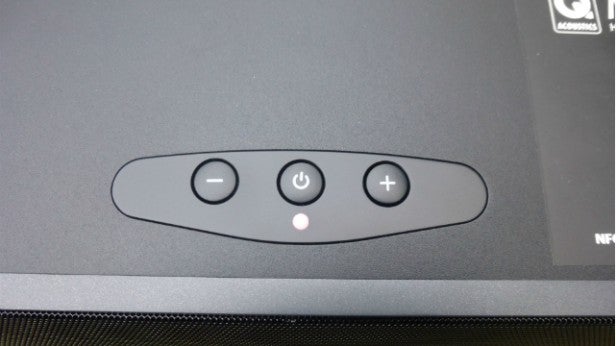 Its inherent simplicity makes the Media 4 a cinch to use. We usually prefer a front-panel display to tell us exactly what’s going on, but the Media 4’s little LED makes things clear enough – red for off, green for analogue, white for analogue and blue for Bluetooth.

The chunky top buttons let you adjust the volume up close, and there’s a remote in the box. Sadly it’s one of those standard-issue credit card affairs, with five clicky blister buttons and an awkward shape.

Thankfully the Media 4 can be controlled by any programmable remote that uses Philips RC5 codes, such as the Sky handset.

We dived head-first into Pacific Rim on Blu-ray and, as expected, Media 4 delivers the sort of powerful-yet-refined sound we’ve come to expect from Q Acoustics’ regular speakers.

Cut to the opening scrap between Gipsy Danger and Knifehead and what stands out is the muscularity of the sound. As these colossal figures smack lumps out of each other, every punch and cannon blast feels big and beefy, while huge footsteps pound into the room with thrilling intensity. This is proper blood-and-thunder stuff, a million miles from the sonic damp squib served up by most flatscreen speakers.

But power is nothing without control and cohesion, which the Media 4 has in spades. During every fight scene the woofer’s deep bass lends heft to punches and explosions, but it’s so tightly knitted to the BMR drivers that you don’t even notice there’s a subwoofer involved – you’re too busy getting lost in the action. It’s fulsome and muscular, yet never draws undue attention to itself.

There will be some people who like a little more oomph in the bass department and that’s fine – just hook up an external sub. But for our tastes (and the majority of people who hear it, we’d wager) the bass on offer is more than enough.

The Media 4 also keeps adrenalin levels high with its attacking tone. Whether it’s a Kaiju claw tearing into robotic armour or a 50-foot lobster smashing through a skyscraper, effects have energy and purpose but never sound brash or unnatural. Too many soundbars either serve up flat, lifeless effects or pierce your eardrums by pushing too hard in the mids and treble, but the Media 4 finds the perfect middle ground.

The Media 4 remains unruffled when you push the volume level up high. We’re also impressed by the clarity and authority it brings to voices – Charlie Hunnam’s narration at the start comes through clearly as the back story unfolds onscreen.

The Media 4 also presents detail as crisply and faithfully as possible. There’s an airy texture to crashing waves and a copious amount of sonic minutiae as Newt walks through the Hong Kong streets. It’s not quite up to the level of Q’s regular speaker systems, but it’s impressive nonetheless.

The lack of envelopment might be issue for some listeners. There’s a nice spread of sound across the front stage, but it feels localised to the TV and surround content is non-existent. But delivering that requires the sort of processing Q Acoustics wanted to avoid, and we commend them for it – we’ll take the Media 4’s cohesive, focused stereo sound over wishy-washy virtual surround any day of the week.

We beamed a variety of songs to the Media 4 via Bluetooth and it’s one of the most musical soundbars we’ve tested at this price. There’s a perfect balance right across the frequency range, with sparkling detail and authoritative mids adding energy to the performance, while the agile subwoofer anchors uptempo beats with punchy bass notes. 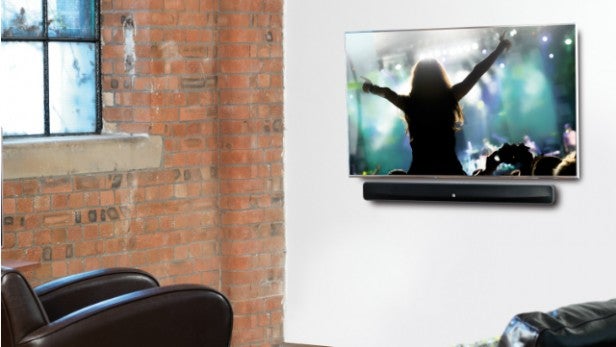 Should I buy the Q Acoustics Media 4?

Q Acoustics knocks it out the park yet again with a superb soundbar that emulates the dazzling performance of its speaker packages. Its powerful, attacking sound and seamless bass make movies sound thrilling, but it’s the sense of cohesion and composure at high volumes that really set it apart from lesser soundbars. It lacks surround presence but we’re not bothered – the Media 4’s solid, focused stereo sound is hugely satisfying.

But unlike high-end soundbars from Paradigm and Monitor Audio, the Q Acoustics doesn’t make you pay through the nose for this scintillating performance – at just under £400 it’s within the reach of mere mortals, which makes its top-drawer sound quality all the more impressive. It’s not quite in the same league as the Paradigm, but it comes incredibly close for a third of the cost.

Only a couple things stop it reaching maximum marks – the big chunky design might not be for everyone, and there are no HDMI sockets – but that aside the Media 4 is an outstanding soundbar at a great price.