LG G Watch: What’s it like to live with?

So how does it work on a day-to-day basis? The idea is that you don’t have to take the phone out of your pocket as much as you normally would, and the G Watch/Android Wear certainly achieves this. This is especially true of notifications from Twitter, calendar events and seeing you’ve completed your step goal count. You control how frequent these updates are and really I didn’t feel like they were a nuisance at any point.

But you do have to Google Now some time to reap the benefits. The more you use it the more useful the notifications and info it provides become. It didn’t take long before my journey to and from work fed in and I was given bus times and calculations for how long it would take to do the commute. A feature that works great on a phone, but makes even more sense on a watch.

The reliance on Google Voice Search poses a problem, though, specifically a social awkwardness one. It’s just not very natural talking to a gadget, though saying ‘OK Google’ and asking it to give you directions or find out some trivia generally provides the desired results. Perhaps as smartwatches become more common people will be less inhibited when using it. 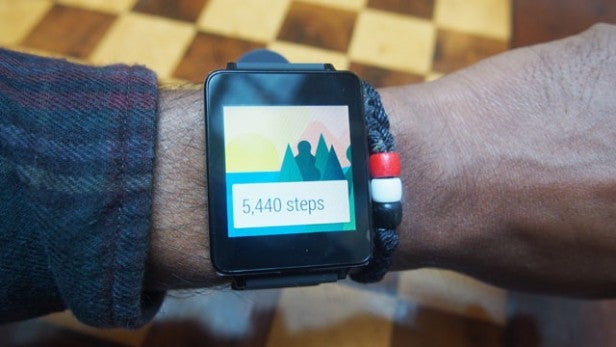 Other tasks, such as trying to send a text message, can be hit and miss. Voice recognition is largely good though on occasions, it’s too easy to accidentally send an unfinished message, particularly as the message sends as soon as you have finished speaking it. An ‘Are you sure?’ screen would definitely come in handy here. When you receive a call you are inevitably still going to need to go your phone but you will get a missed call notification and the ability to call back on the phone.

When making a note we had no idea where it would appear until we checked our Gmail account and found it as an email message the next day. Filing into Google Keep would have made more sense.

Clearly, while the basics work well enough, the voice recognition still needs some work to become reliable enough for comfort. 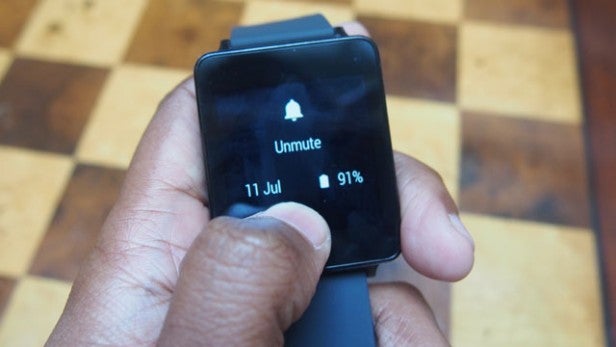 How long should a smartwatch last? From LG’s perspective, one day is not enough so the 400mAh battery inside the G Watch gives you 36 hours. That’s a day and a half, so you are still going to need to charge it as frequently as your smartphone.

The always on LCD display is going to be the main reason why the battery is sapped so quickly. You can turn it off, but then the G Watch stops being a watch and defeats the object of having it. We still think a day or a day and a half is unacceptable and manufacturers should be pushing for a week at the very minimum, which the G Watch falls well short off.

It takes around an hour to fully charge from the plug adapter and charging cradle and at 100%, and it was down to 20% by 11pm on most days. You can get over a day’s use, but it’s not going to be by much and the fact it doesn’t make it through two days means you are still going to need to charge it every night.

Another problem is the charging situation itself. There’s no direct micro USB charging port and that’s really frustrating. Clearly it has been done to keep the size of the watch down, much like LG’s decision to not include wireless charging. From a practicality point of view it’s a pain because the scenario of forgetting to charge it overnight and leaving the charger at home is inevitable. This is something that really needs to be addressed with all smartwatches. 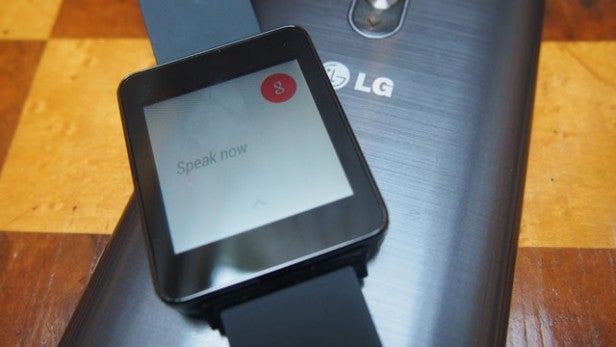 Should I buy the LG G Watch?

It’s easier to be more complimentary about the software running the G Watch than the hardware itself. The design is drab and just not very interesting to look at for starters. While the screen is a good size to view notifications and apps, the screen visibility in bright sunlight is a massive oversight. Then you have to factor in the average battery life and the fact you have to deal with a proprietary charger and there’s numerous reasons why the G Watch is not quite there yet.

We’ve only seen the Moto 360 and Samsung Gear Live in pictures so it’s impossible to make comparisons, but what we can say is that this feels like a first generation device. The hardware is not quite up to scratch and Android Wear still needs some work.

At a time when people will be questioning whether smartwatches really have a place in our day-to-day lives, Android’s smartwatch-friendly operating system does show there can be a future for the device. Elements like Google Now and the clean card-style UI works well on a small screen. While we will never warm to the idea of talking to a watch in public, voice recognition does largely work as well. We just need the hardware to go in the right direction along with it to really give it appeal.

The Pebble is still currently the best example of how to make a good smartwatch, although that’s not perfect either. Crucially, it is well stocked with apps, has a visible screen and a battery life that lasts more than a couple of days.

The LG G Watch gets many things right but also gets a lot wrong and based on what we’ve seen, this is not a must-buy Android Wear smartwatch.

The LG G Watch showcases the potential of Android Wear, but the hardware is just not up to scratch. The wait for the definitive smartwatch continues.