Ultimately, this is what LG and the likes of Motorola and Samsung hope will be key to giving smartwatches genuine appeal. Google’s Android Wear operating system, which is a tweaked version of Android, has been optimized specifically for devices like smartwatches. The hope is that Android app developers will be encouraged to port smartphone apps to work on the smaller screen and avoid the scenario Samsung find itself with the Tizen-based smartwatches, an app store that’s very bare.

Google Now, the intelligent card-based notification software already available on Android smartphones plays a major part in the overall look and feel of the UI and the functionality of Android Wear. That alongside Google’s Voice Search aims to give you the kind of bite-sized information you will really need and not have to go into your pocket to check it on your phone.

The G Watch runs on Android 4.4W and fully embraces the card-based user interface with nice large icons when you need to perform an action or move something back to the phone to deal with. This interface is ideally suited for a small screen and doesn’t feel cramped on the G Watch screen. 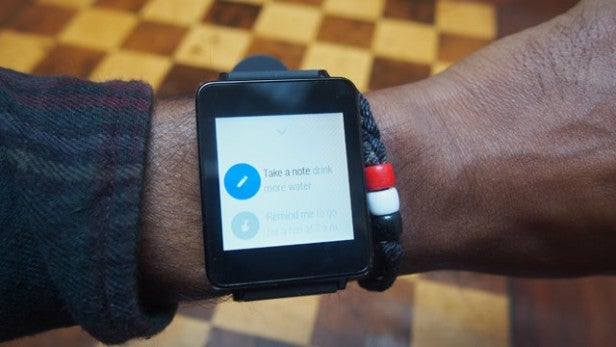 What you really need to get to grips with is how to get around the operating system as some elements are more straightforward than others. This involves learning the different screen swipes to find out where everything lives.

To start off, the main screen displays the time and if you swipe and hold down you can see the date, battery level status and mute or unmute notification alerts. If you press on the screen you’ll access the different clock faces to apply and there’s a good range to choose from whether you want the analogue or digital look. When a notification pops up on the screen, simply swiping right on the screen will dismiss it or swiping left will give you the options to act on the notification.

Double tapping the screen opens up Google Voice search, although alternatively you can just say ‘OK Google’ and that will activate it well. You don’t have to be really close to the microphone for it to work and simply lifting your arm towards your face should be sufficient. Bizarrely, this is also the place you need to go to search through settings and launch apps. It would have made more sense to have separated this from Google Voice Search to avoid confusion. Lastly, if you want dim the screen, you simply need to place your palm over the screen.

Those are the basics of Android Wear. You will inevitably swipe at things the wrong way to start off with, but it quickly becomes very easy to get accustomed to and is largely an intuitive operating system to use. 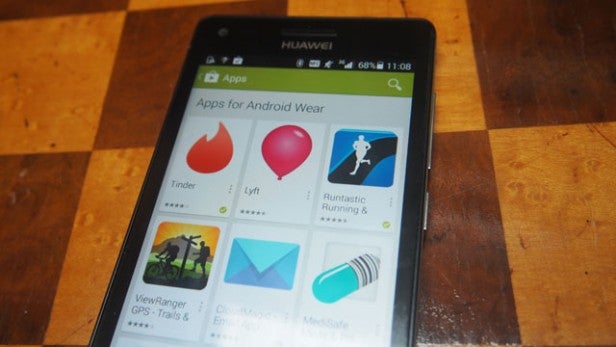 Currently, there are  around 30 Android Wear apps that can be viewed through the Android Wear app you need to download first to set up the G Watch. Once installed you’ll be able to adjust settings like switching off the always on screen, hiding cards, viewing calendar events muting app notifications.

30 apps is about the same amount that was available for the Samsung Gear 2 and Samsung Gear 2 Neo. But, crucially, it’s not just full of watch faces and Korean radio stations. There’s a good variety of apps to get you started and once installed on your phone will appear underneath the Start option on the G Watch, which is buried at the bottom of the Google Voice search screen.

We tried out a handful of them to see how well they work on the G Watch and we had mixed results.

Runtastic Running & Fitness
If you’ve used Runtastic before you know what this app is all about. To start tracking runs you’ll need to launch the app on the G Watch to begin a session then swipe right to show distance/time/calories, pause and stop the session. There’s a summary of your workout displayed on the watch. The lack of built-in GPS means you do still have to go out running with your smartphone but other than that, it works nice and seamlessly.

Duolingo
The language learning app doesn’t replicate the Android app, opting instead for a memory flashcard UI where a word is displayed and after a countdown the translated word is revealed. You can then swipe whether you were right or wrong. It might not be as effective as delving into the full app but it does offer a handy bite-sized way to stay on top of doing your homework. 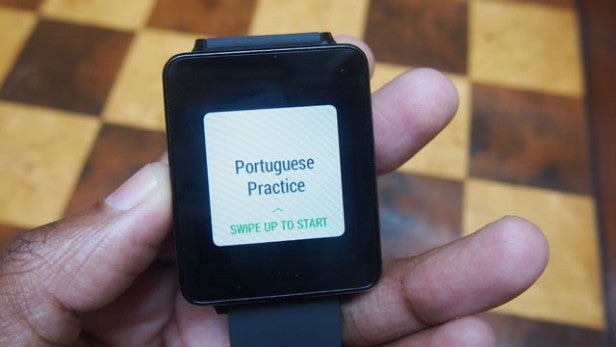 Google Keep
For anyone not familiar with one of the latest native Google applications, this is essentially a note-taking app in the same way that Evernote is. In its Android Wear guise, you can open all notes saved and read them in full on the G Watch. You can also archive content and choose to open it on the device. Reading notes doesn’t feel cramped and is one of the most useful Android Wear apps.

Tinder
Do you swipe left or right on the watch? The ‘dating’ app is probably one of the most suited applications and largely works without any issue. When you press on the person you like it will flip over the card to show shared interests. We did encounter one issue where flipping the card froze so it’s not without its problems.

CloudMagic
Unifying email clients like Outlook and GMail, CloudMagic didn’t initially deliver any emails to our G Watch. We tried resyncing applications again and that really didn’t do the trick and problem why it didn’t work wasn’t immediately obvious. The request to approve access from the G Watch did eventually appear and our Gmail messages did get pulled through allowing you to scroll through the entire message. 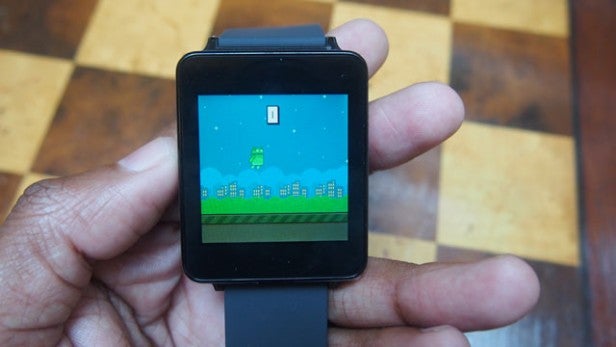 Flopsy Droid
There are no games currently included in the
dedicated Android Wear section on the Google Play Store though a quick
search on the store and you can find this Flappy Bird clone. It
downloads directly to the G Watch when you install it to your
smartphone. There’s no sound and and getting a high score is going to be
tough but it’s actually playable on the small display.

OnefootballBrazil
Not tremendously useful with just one
game to go, OnefootballBrazil let’s you pick a team to follow and then
on the G watch app shows the latest match with stats on the game,
including possession and substitutions. Google Now already really offers
this service in a way if you’ve selected to receive the World
Cup-themed cards so this is one you can live without.

musiXmatch music player
This app basically lets you see song lyrics as your music plays with a few more added features that don’t transfer to the Android Wear version. Again, the app icon fails to appear on the G Watch and we had to launch the app from the phone before the cover art and lyrics finally show up. Interestingly, it also worked with some third-party apps, including Soundcloud

AllTheCooks
The recipe app works really well with the G Watch. When you press on a dish, the name will pop up on the G Watch homescreen and swiping right to Get Started the recipe will give you the ingredients and step by step instructions on how to make it. 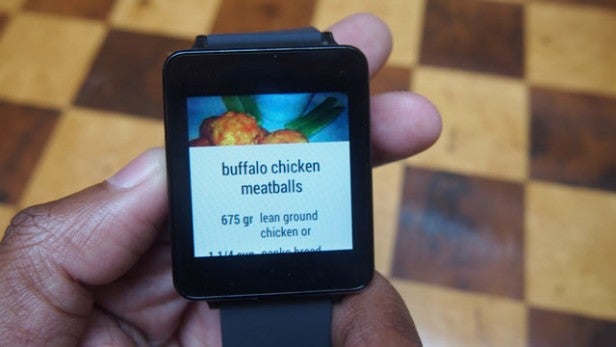 LG does also include some additional native applications like a Compass, a World Clock and a Fit section where you can view step count, adjust step goals and have the option to save the fitness data.

One the whole, Android Wear apps are much more useful and intuitive in comparison to what Samsung served up with its smartwatches and shows there’s some great potential there if app developers get behind it and recognise which information works well in bite-sized chunks.

The only really frustrating issue is trying to close apps and the lack of a dedicated Settings section away from the Voice Search would make a lot more sense.