The Qualcomm Snapdragon
400 chipset which powers the G Pad 8.0 isn’t going to win any awards
when it comes to processing grunt – even last year’s G Pad 8.3 came with
more powerful internal tech. Backed by just 1GB of RAM, this rather
weak chip doesn’t make for a particularly smooth user
experience.

General navigation around the Android 4.4.2 OS is often jerky –
usually when background tasks are being performed. The fact that the
chipset’s having to push less pixels thanks to the G Pad 8.0’s low-resolution screen does balance out the weakness of the
processor somewhat, but this isn’t the kind of slate that’s going to
blow your socks off with its performance. Gaming on the G Pad 8.0
also presents problems, with graphically intense 3D titles really
pushing the Adreno 305 graphics processor to the limit. 2D titles fare
much better thanks to their less demanding nature, but this is hardly
the kind of device you’d recommend to a diehard mobile gamer – they’d be
much better off with the Nvidia Shield Tablet, which of course retails
for more than the £150 you can expect to pay for LG’s offering.

Although
there are stereo speakers on the rear of the G Pad 8.0, the sound
quality is rather average. Audio lacks bass and when the volume is
turned up to maximum, there’s quite a lot of distortion. You’re much
better off using the tablet’s headphone socket.

You have access to just under 11GB of the 16GB
that’s included inside the G Pad 8.0. The purchase of a microSD card
is almost compulsory if you wish to consume large amounts of
downloadable goodies, but thankfully these are cheap enough and the
chances are you’ve probably already got a few lying around the house.
The G Pad 8.0 can accept cards of up to 64GB in size, so you could
really go mad if you wanted to. 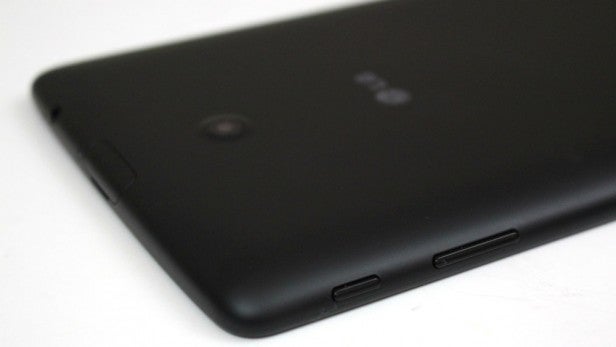 The G Pad’s
5-megapixel rear-facing camera lacks an LED flash, so taking shots in
darkened environments is off the table entirely. Photos are rather fuzzy
and lack definition, which means you’re unlikely to want to rely on
this device for your main image capture.

It copes better in direct
sunlight and even allows you to take a snap by bellowing a special word –
such as “Cheese” – but on the whole, it’s not a device you’re likely to
use for photography or video, especially if you have your mobile phone
to hand.

The front-facing 1.2 megapixel snapper is primarily for video
calls and those who have succumed to the unfortunate “selfie” plague
that’s currently sweeping the nation.

One
area where the entire G Pad range truly excels is battery life. The 8.0 comes with a 4200mAh non-removable power cell which we found
was roomy enough to get us through a few days of moderate to heavy
use. Naturally, activities such as playing games or watching movies
will gobble away at your juice faster than simply reading emails or
visiting a few websites, so your own mileage may vary. Certainly,
compared to other Android tablets, the G Pad 8.0 has impressive staying
power – something which could perhaps be attributed to its less
demanding chipset. 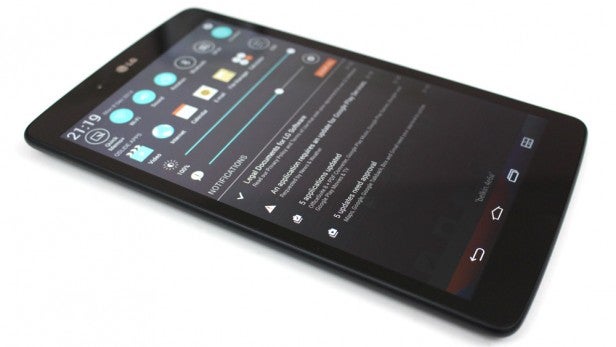 Like
its larger sibling, the G Pad 10.1, the G Pad 8.0 has been forced to
endure some compromises in order to hit its impressively low price
point. The sluggish Snapdragon 400 chipset often struggles to keep up,
and the overall experience is generally skittish.

However, the low-res
screen is less of an issue on this model as the display size is smaller,
making those blocky pixels less obvious. It’s also impossible to deny
that LG has done an excellent job with its customisation of the Android
OS – the features it’s introduced are genuinely useful, and the minor
cosmetic changes deliver a look which is just as pleasant as stock
Android, if not more so.

The G Pad 8.0 won’t satisfy the needs of
seasoned tablet aficionados, and is arguably better suited to newcomers
or younger users, but for the price, it’s still worth a look if you’re
shopping on a tight budget.

The G Pad 8.0 is
underpowered compared to other Android tablets, but for £150 it’s still
worthy of consideration if your expectations are modest.