What is the Lenovo Yoga Tablet 10 HD ?

We could accuse many tablets of looking like iPads, but we’re not going to level that criticism at Lenovo’s latest slate. A tubular bulge dominates one of the Yoga’s longer sides, and it facilitates this machine’s two key features: a metal stand that props the 10.1in device into several positions, and a whopping 9,000mAh battery.

That’s not the only feature that the Lenovo uses to go after the competition. It’s got a high-resolution 1,920 x 1,200 screen and a quad-core processor. It’s also £100 cheaper than its key rivals. 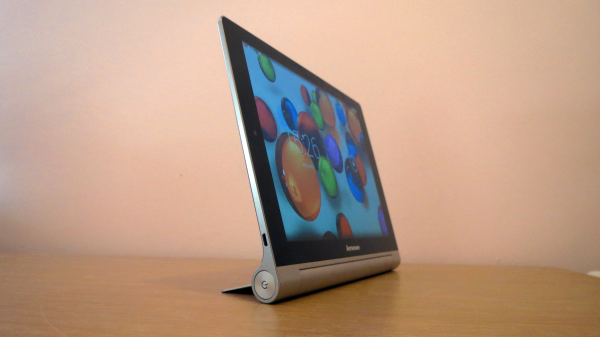 The Yoga Tablet remains one of the most distinctive products on the market thanks to the stand along the bottom of the 10.1in panel. The circular stand bulges out from the base of the Yoga, and it props the tablet into different positions without the need for a case or a hand.

With the stand extended to its default position, the Yoga works in a couple of different ways. Prop the Yoga up at the bottom and the screen angles almost vertically, which is great for watching movies. Switch the tablet round, and the Lenovo sits at a shallower angle, which is more suited to typing.

The stand isn’t restricted to its default position, either. The metal construction means it’s sturdy enough to sit steadily at any angle, which makes it easy to adjust when viewing Netflix or iPlayer. We criticised the original device’s stand for being a tad short, which meant it was easy to tip the tablet over when using the touchscreen, but that’s been handled here. Only one criticism remains – that the stand itself can be quite tricky to unfurl. 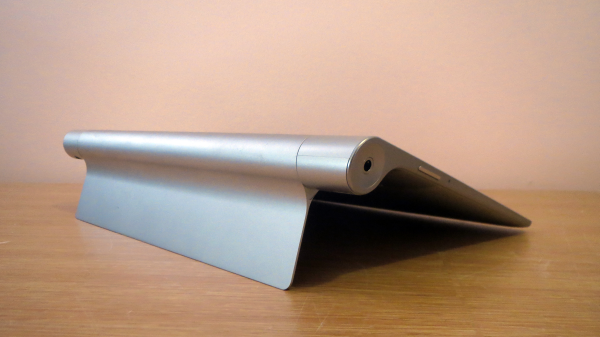 There’s no shortage of high-class design elsewhere. The ends of the circular section house the headphone jack and power button, and forward-facing speaker grilles stand out on either side of the hinge. The plastic rear panel looks good, with an understated patterned finish.

It’s a sturdy slate, but the addition of the stand and the tubed base push the weight up to 626g, with the centre of gravity along the thickest edge. That’s almost 200g more than the Samsung Galaxy Tab S 10.5, and exactly 200g weightier than Sony’s Xperia Z2. The Lenovo’s 8mm body is more than 1mm thicker than its rivals, and the tubular hinge stretches 21mm from front to back. 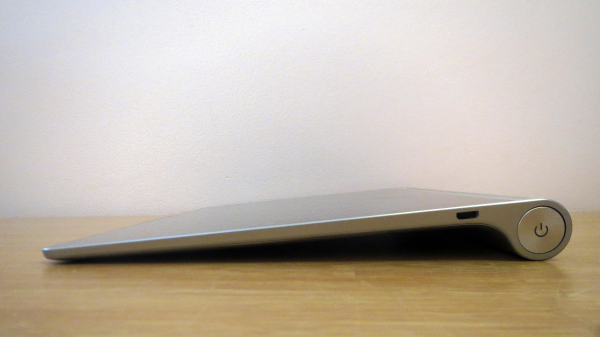 The Yoga is cheaper than its rivals, and that means it’s missing some high-end features. It’s got 802.11n Wi-Fi rather than the future-proofed 802.11ac hardware included in the Samsung and Sony models. The more expensive £343 version of the Lenovo has a SIM-card slot behind the stand, but it’s only compatible with 3G hardware. Both of this tablet’s competitors have 4G versions.

Internal storage stops at 16GB – both competitors are available in 32GB models – and the microSD card slot handles up to 64GB of extra storage. That’s capacious, but the Samsung can take cards with double the capacity. 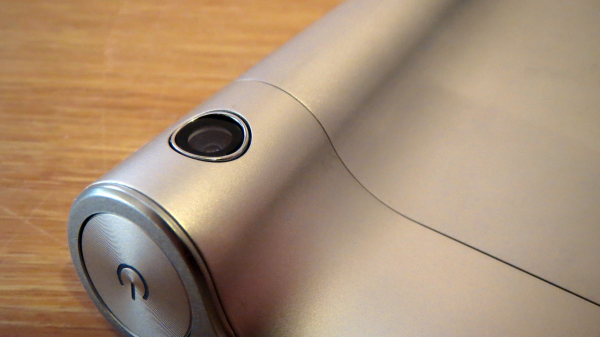 The Lenovo’s 8-megapixel rear camera matches the Samsung and Sony, but the Yoga’s 1.6-megapixel front-facing shooter doesn’t match the fidelity of the competition. There’s no flash on the rear camera, either.

Several more peripheral features aren’t found here, either. There’s no fingerprint reader or IR blaster, and none of the rugged features that impressed on the Sony.