The Yoga is powered by an Intel Atom Z3745. It’s a quad-core chip clocked to 1.86GHz and paired with 2GB of RAM. On paper, that’s better than Apple’s A8X processor, which has three 1.5GHz cores and the same amount of memory. Storage comes from 32GB of on-board space that can be augmented with a 64GB microSD card.

It’s a reasonable processor, but it’s unable to keep up with the fastest slates. Its Geekbench score of 2,517 fell behind the 4,509 scored by the iPad Air and the 3,562 result served up by the Nexus 9.


The Intel chip’s integrated graphics core couldn’t keep up with rivals, either. Its 3D Mark Ice Storm Unlimited score of 16,674 is good, but the iPad managed 21,797.

That doesn’t bode too well, but we didn’t notice any slowdown in real-world games. Dead Trigger 2 ran at a consistent, smooth frame rate, while Real Racing 3, Batman: Arkham Origins and Assassin’s Creed: Pirates were similarly slick.

Powerful applications weren’t too much for the Atom processor, either. We edited some photos with Photoshop Express and didn’t hit any slowdown. We were able to switch between conventional Android apps without delay, and only encountered a tiny bit of juddering when installing multiple bits of software at the same time.

Lenovo’s latest swipes through games and apps well at the moment, but we’re not as confident for the future. Its poorer benchmark scores indicate that this tablet has less headroom for accommodating more demanding apps further down the road. 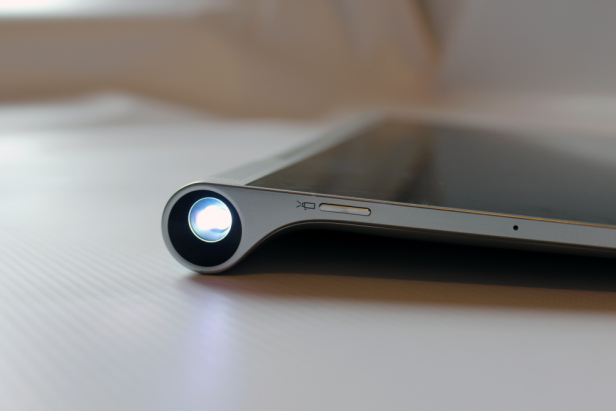 The pico projector is a mixed bag. The software has apps for watching movies and sharing presentations, and getting the projector working is simple: push its dedicated power button and the tablet’s screen is beamed from the end of the hinge. The focus slider is far too sensitive, though, and that’s not our only issue. The 854 x 580 resolution puts paid to 720p or 1080p viewing, and the brightness is merely mediocre.

The Yoga includes two cameras: an 8MP lens on the rear, and a 1.6MP shooter on the front. The rear shooter has the same megapixel rating as the iPad Air 2 and the Nexus 8, and it’s not a bad bit of kit – for pointing and shooting quick snaps, it’s perfectly adequate.

Look closer, though, and the differences in quality become clear. The Yoga’s shooter captures decent amounts of detail, but the iPad’s shots are sharper – and Apple’s camera handles light with more aplomb, with more success picking detail out of shadowed areas. Colours are more vibrant on the iPad, too. 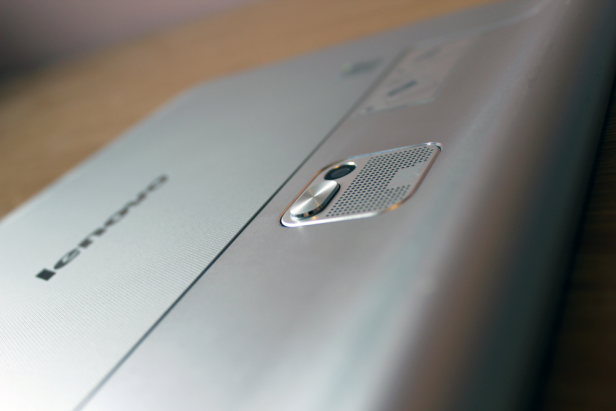 The Yoga can’t match the iPad, but it’s on a par with the Nexus. Both cameras capture similarly sharp detail, and both suffer when confronted with extreme sources of light – in our landscape shots, for instance, the sun was overexposed while other detail was found wanting. There’s no flash, either.

There’s one final thing we need to mention about the camera, and it’s nothing to do with the quality of the lens. The Yoga is one of the largest tablets we’ve seen, and you’re going to look a little silly using it to take pictures. We’re just saying.

The Yoga’s sizeable dimensions and cylindrical side mean there’s ample room for a battery. Lenovo has crammed a 9,600mAh unit inside, which means it’s a larger pack than the iPad Air 2 and the Nexus 9.

That should bode well for longevity, though the Yoga disappointed in tests. We set the screen’s brightness to 50% and looped a 720p MP4 video and the Lenovo lasted for 8 hours 40 minutes. That’s almost three hours poorer than the Nexus 9 in the same test, and it’s also much worse than the iPad, which lasted for ten hours with gaming, video playback and web browsing. 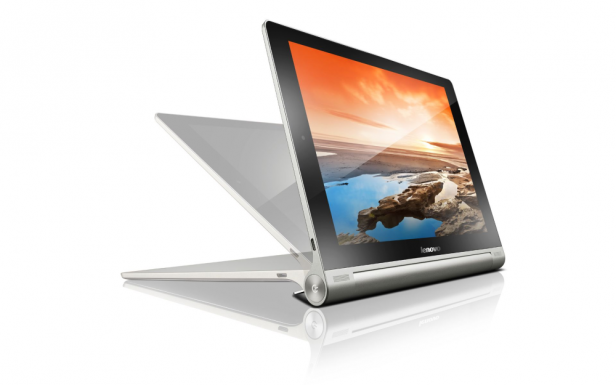 Should I Buy the Lenovo Yoga Tablet 2 Pro?

Lenovo’s latest tablet is a risky addition to its Yoga line. It’s one of the largest tablets we’ve ever seen, and it’s one of the most versatile too: we’ve not seen a pico projector inside a tablet before, its stand is improved since the last generation of Yoga, and its internals have enough grunt for work and gaming. It’s best in a work scenario: propped up using its stand, and paired with a Bluetooth keyboard.

For every advantage, though, there’s a noticeable downside. The 13in screen doesn’t offer more quality or detail than rivals, but its sheer size makes this one of the most cumbersome tablets we’ve reviewed, tricky to hold in two hands and awkward to use certain apps.

The projector can’t churn out 720p or 1080p images, other tablets have more power, and the Yoga’s capacious battery disappointed when compared with rivals. The software has its quirks, too; plenty of business features, but with a simplistic interface and an outdated version of Android.

This is a brave, intriguing bit of kit, but its versatility and design can’t make up for its numerous deficiencies. Apple’s iPad Air 2 remains cheaper, lighter, faster and easier to use.

Lenovo has been bold with its latest tablet and, in some areas, it pays off: the stand and projector add office versatility, and the big screen offers good quality and a laptop-style experience. Build quality and design are top-notch, too. However, all of that is undermined by the Yoga’s size, weight and oddball design, as well as rivals that offer more power for less cash and bulk.