What is the Lenovo Yoga Book?

The Yoga Book is one of the most exciting products of 2016, with a form factor never seen before in a mass-market consumer device. You can type on it, write on it and copy your physical notes into digital form. As a concept, it was a regular note-taker’s dream and something that looked perfect for students.

In practice, it’s still mighty impressive. But its relatively high price and slightly slow performance mean I’d probably wait for a Yoga Book 2 or opt for a Google Pixel C with a Bluetooth keyboard instead.

The Yoga Book is the most delightfully-built laptop/tablet I’ve ever used. Weighing just 690g and just 9.6mm thick, this 10.1-inch machine is about as close to a paper notebook as you can get. 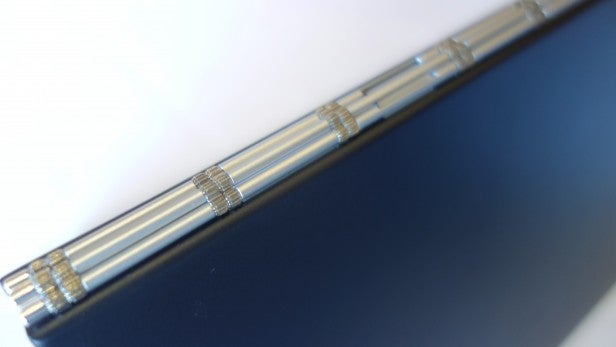 The grey metal chassis with its hard edges, rounded corners and stylish “watchband” hinge make the Yoga Book feel far more expensive that it actually is, and isn’t something I ever thought twice about carrying around in my bag.

The keyboard and drawing area has a slightly glossy layer to it so the stylus rolls around it nicely, but it’s not so slippery that it’s physically hard to type on. 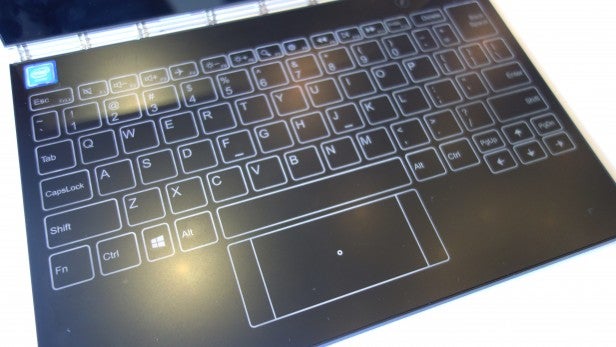 You get a single Micro USB port for charging, a 3.5mm headset jack and a microSD card slot that’ll take cards with a capacity of up to 128GB. That’s in addition to the 64GB of built-in storage.

The light-up keyboard induces ‘oohs’ and ‘ahhs’ from whoever’s nearby – it looks like it’s from the future – but as you’ll see from the next section, the magic is short-lived when you actually try and type on it. 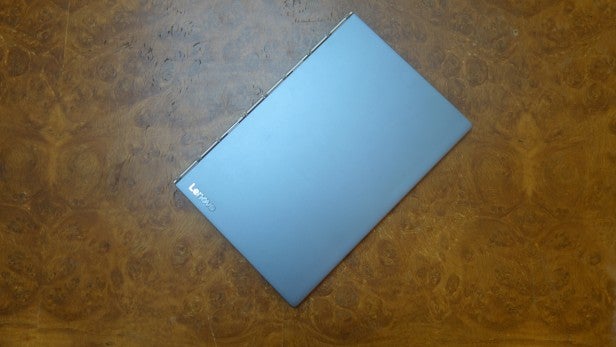 There’s a reason why keyboards are still so thick and tactile. We need that feel to them so we know where and what we’re typing. Or, like with on screen keyboards, we need instant visual feedback on the button that’s just been pressed. The Yoga Book can offer neither, and that’s a problem.

Despite haptic feedback that vibrates the entire keyboard when you hit a key, the lack of any proper physical feedback does make for a fairly typo-heavy experience. In truth, this isn’t a massive problem when taking notes because you’re not writing an essay that anyone but you will be reading. But with one misplaced finger leaning on a key you can end up going down a spiral of typos that’s very hard to escape from.

The pre-installed keyboard (called TouchPal), which handles both the on-screen keyboard and the LED ‘board, isn’t brilliant at making predictions. You can pre-select predictions by pressing the corresponding number on screen, but this works terribly when typing usernames and passwords that contain the numbers one to three. It’s almost impossible to do it without having to go back and delete unwanted characters.

Fortunately, you can install third-party keyboard software. I switched to SwiftKey, which knows my typing habits better than I do, and felt more comfortable. It’s nowhere near as effective as it is on phone touchscreens because a large part of its prediction technique comes from the exact spot where you place your thumbs on a touchscreen, not just the key you hit.

With the Yoga Book, all it had to go on was each individual letter, not where on each key I physically placed my fingers. Still, after around 20 minutes of practice I was writing this review and only making typos every few words. For rapid note taking I think it’s just about passable, but there is room for improvement. I reckon a fairly major software update would be able to fix many of my problems, but that’ll only happen if Lenovo agrees with my issues.

It’s more comfortable than typing with two hands directly onto the screen, but it’s a poorer experience than having a physical keyboard. Lenovo says the keyboard learns as you type, which it may well do, but it won’t stop you from occasionally going down a typo rabbit hole that’s hard to escape.

The touchpad is a much bigger problem. Lenovo’s tutorial suggested I’d be able to scroll up and down using a two-fingered gesture, but I can say with 100% certainty that it does not work properly and might as well not be a feature. The pad is sometimes fine for tapping around but I found it too inconsistent and frustrating, so I avoided using it at all costs. It was always easier just to reach out and use the touch screen. The touchpad portion, for me, is simply wasted space. This can probably be fixed with a software update, but right now it’s unusable.

The killer feature of the Yoga Book is the RealPen. It can be used as a regular stylus, or you can very awkwardly replace the stylus nib with one of the supplied ballpoints instead. You can only used Lenovo’s ballpoints, and a pack of three replacements will cost you £8.49. Right now Lenovo is also charging an additional £15 for shipping, which the company tells me is a mistake. But until Lenovo fixes it, you won’t be able to buy the ballpoints without getting ripped off for shipping. If you lose the entire pen, it’ll set you back £43.

After two weeks of use, I’ve already lost one of the ballpoint ends and I’m frantically searching for the stylus tip as I write this review (Author’s note: after this review was published I found the missing ballpoint and stylus. I also bought a lottery ticket immediately after). There’s no good place to store the nibs, even though the pen is hollow, so if you’re even half as forgetful as I am, you will lose at least one of them in fairly short order. An expensive mistake. 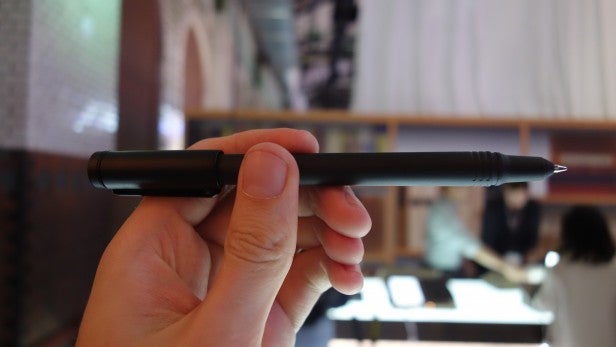 In use, the RealPen is superb. You get a notebook in the box with the Yoga Book, which clips into a magnetic holder that you then place onto the keyboard tray. You can then write onto it with the ballpoint pen, and everything you write will be digitally transposed into  Lenovo’s Note Saver app. It uses Wacom’s passive electromagnetic resistance (EMR) technology to work out where the pen is, and is very similar to Wacom’s Bamboo Spark, which synced notes with tablets and phones over Bluetooth.

The capturing of physical notes is incredibly accurate; the Yoga Book never missed a stroke and even understood how much pressure I was applying. The writable surface doesn’t stretch all the way to the end of the notebook, so you need to pay attention to where on the page you’re writing, otherwise you’ll lose the very edge of what you’re doing. 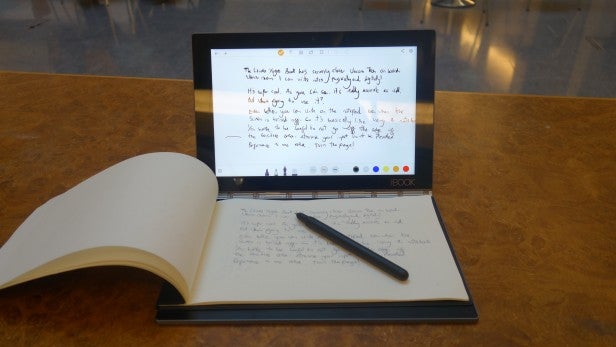 I particularly liked the ability to flip the notepad around to the back of the device and use it for note-taking with the screen switched off. The only thing you have to do is double-tap the note-taking button on the keyboard to tell the tablet you’ve turned to a new physical page. If you forget, you’ll have multiple pages of notes on top of one another.

It’s all very clever. However, it’s where these drawings end up that’s the problem. The only software that works with it is Lenovo’s Note Saver app, which doesn’t automatically sync your notes to the cloud. The only way to do this is to share a note via your preferred cloud storage provider, at which point it becomes a PNG image file. For me, cloud backup or third-party app support, such as Evernote, is an essential feature that’s missing. 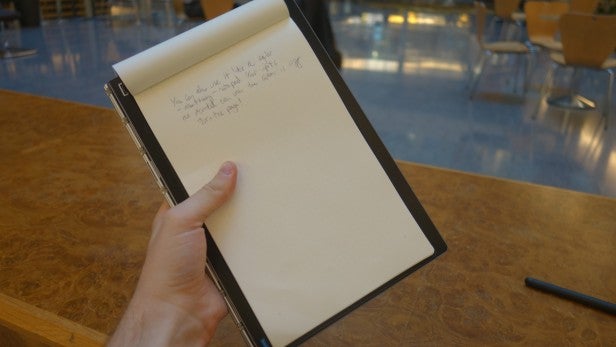 There’s one caveat here: You can use Evernote and other third-party drawing apps with the pen and it will sync to the cloud. However, it only works when the screen is on and when it’s the only app open. This is different to Note Saver, which can take notes even when it’s not open and when the tablet’s screen is switched off.