Performance isn’t what you’d call quick. Powered by an Intel Atom processor, the Yoga Book finds itself having issues with media and ad-heavy web pages, which means you’ll normally need to wait a few seconds before attempting to navigate down a web page. Even the addition of a generous 4GB of RAM isn’t enough to make things feel pleasant.

I played Mini Metro quite happily on the Yoga Book for several hours, but you can forget playing high-end 3D games such as Real Racing 3; that game in particular is unplayably jerky.

While only devices running Android 7.0 and beyond have native multi-window support, Lenovo has made its own interpretation running on Android 6.0.1. It’s very useful in the apps it actually works with; YouTube, Twitter, Facebook and Chrome can all be moved around the screen, but it’s limited. You can’t resize windows properly and when you start opening multiple windows, things start to slow down significantly, apps stop responding and all exhibit unpredictable behaviour. It’s only really useful when using one app in full screen mode and having another open on top of it. Beyond that, it’s too unreliable. 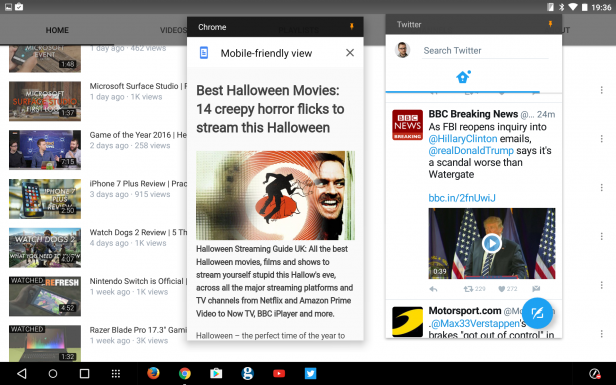 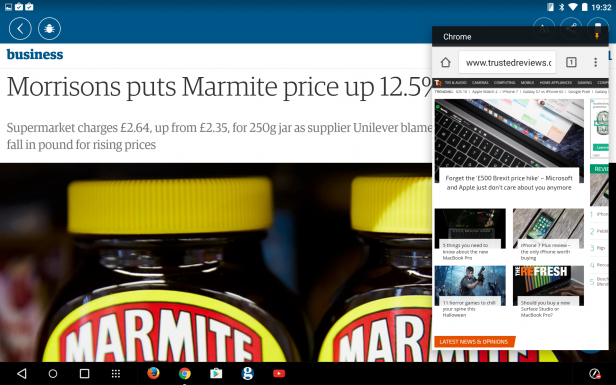 Away from multi-tasking, the Yoga Book runs a modified version of Android with a full, Windows-style taskbar where icons appear when apps are open. From there you can close apps by dragging them off the task bar, and go into Overview mode to switch to other currently-open apps.

The screen isn’t the finest you’ll find on a tablet. It’s a Full HD IPS panel, and while viewing angles are decent, everything else is just a little muted. It’s at least bright at 380 nits. Contrast is rated at 1007:1 according to my measurements. Images have plenty of detail and whites are punchy, and blacks are reasonably deep. 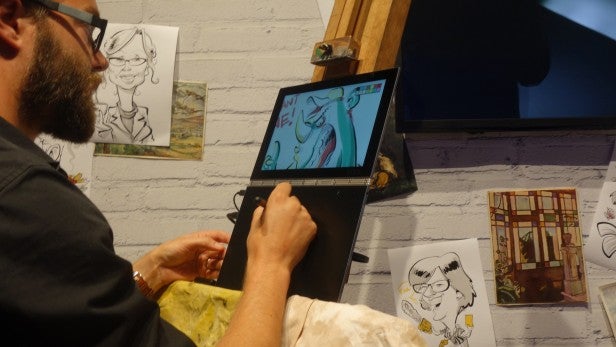 Colours aren’t as vibrant you’d want from a £450 tablet, but since you’re getting a lot of extra kit on top of the tablet itself, the screen isn’t exactly out of place; it’s more akin to what you’d find on a £250 tablet.

Digital artists will be disappointed by this; without a colour-accurate screen the Yoga Book is limited in usefulness when working on colour sensitive documents. The one crumb of comfort is the micro HDMI port, which you could use to connect to a better external monitor.

The Yoga Book’s speakers are befitting of a tablet built for media consumption. There are two speaker grilles on the left and right edges of the keyboard tray and they produce loud and clear sound with decent mid-range coverage. They’re great for watching YouTube and Netflix and music sounds perfectly fine, if nothing special.

The microphone, meanwhile, isn’t great. Voices sound muffled and while software noise cancelling is present when recording voice notes, it makes everything sound harsh and compressed.

Finally, the 2MP front-facing camera is fine for video calls; it adapted to harsh backlighting pretty well and my face was, for the most part, clear and well represented. The rear-facing camera is actually mounted on the keyboard tray and is only of use when you flip the keyboard round. It’s an 8MP sensor and produces usable photos, but it’s not something on which you’ll want to capture life’s precious memories.

Battery life is a real strength of the Yoga Book. In Trusted’s Netflix test, watching an hour of streaming at a screen brightness of 150 nits, the Yoga Book consumed 10% of its battery. Easy maths: you’ll get around 10 hours of streaming from this device. 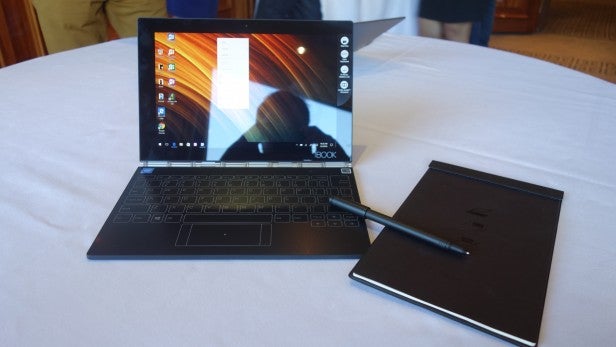 In everyday use, I found myself getting around eight hours of use with the screen brightness turned up, switching between Google Docs and the web browser. This is just enough for a full day of work, and a decent result.

Should I buy the Lenovo Yoga Book?

A tough question for such a unique device. The Yoga Book should be very useful for students and sketchers who want to back up their work and also need a tablet for typed note taking. For everybody else with less specific use cases, a £400 Google Pixel C (with a third-party Bluetooth keyboard) might be a better choice. Or, if you want to spent a lot more, the highly capable 9.7-inch iPad Pro has better performance, an amazing stylus and a good keyboard. But with all of that you’re going to be spending close to £700.

There’s loads to like about the Yoga Book, but over-simple software and sluggish hardware leaves me waiting for a new-and-improved second edition.