When the Pixel C was released it was one of the only Android tablets worth buying. In 2017, for better or worse this remains the case. Despite being over a year old there haven’t been any other decent premium Android tablets to hit the market.

Luckily the Pixel C has aged fairly well thanks to the arrival of Android Nougat. Nougat’s new features massively improve Android’s user experience on a tablet. The split-window mode and improved notifications are particular highlights.

Multi-window support isn’t anything new – Samsung added the feature to its TouchWiz skin many moons ago – but its appearance on Nougat is great nonetheless. This lets you open two applications at once on the Pixel by holding down the right-hand, on-screen square button.

The feature is a little hit and miss on third-party applications, which need to have code added to work in the new screen setting, but it’s still very useful, as nearly all of Google’s own apps have been optimised for it.

Since this addition I’ve found myself grabbing and using the Pixel C instead of a laptop when travelling. The improved battery life and the fact that I can have two apps opens is particularly useful for work. On regular occasions I’ve found myself writing articles at press events in Google Docs, while chatting with the Trusted team in Hangouts using the split-screen mode.

The additions again make the Pixel C feel a lot more like a hybrid device and a more valid option for students, or office workers looking for a truly portable backup laptop.

All this is great, but the behind-the-scenes upgrades are a little less useful on the Pixel C. The main changes in Android are a streamlined version of Doze, Vulkan support and the readdition of a JIT compiler.

Doze is a battery-saving feature introduced in Android Marshmallow that works to reduce power consumption by turning off anything but critical processes when the phone or tablet isn’t being used. The new version in Nougat is, in theory, able to save power when the device is on the move by making it only access data in intervals. Given the fact that the Pixel C doesn’t have a SIM slot, the feature doesn’t make a blind bit of difference.

Vulkan support is awesome on paper, but again isn’t directly relevant to the end user. Vulkan is a graphics API designed to replace OpenGL ES, which was used on older Android versions. It aims to make it easier for developers to make prettier-looking games that are less power intensive, by giving devs more granular controls over devices’ hardware. This, in theory, means games should be able to access, or take better advantage of, the Pixel C’s tech, but it doesn’t have any direct impact on the tablet’s overall performance.

The addition of a JIT compiler is more interesting, but again not really relevant to the Pixel C. The compiler changes how the OS installs, loads and runs apps. Specifically it makes it so Android compiles application data as and when it’s needed, rather than doing so beforehand like an AOT compiler does. This sounds great, but on the Pixel I didn’t notice any marked performance improvements. This is likely because the Pixel is already fairly powerful, featuring an Nvidia CPU and 3GB of RAM. The only time you’ll notice a marked change in performance thanks to the shift is when using lower-powered devices, with less memory.

The Pixel C has aged very well and remains the best Android tablet around, but I wouldn’t recommend anyone buy it. Despite it having aged well, it’s currently overpriced, with pricing starting at a hefty £479.

There aren’t many rival devices out at the moment, but I expect we’ll see a fresh wave of Android tablets from Lenovo and Samsung at MWC, which is right around the corner. I’d recommend waiting and seeing what the new tablets bring to the table before shelling out for a Pixel C.

You can read Trusted’s original Pixel C review below

What is the Google Pixel C?

Google’s touting the Pixel C as “the most advanced Android tablet” ever made, and for good reason. It features a wealth of top-end hardware, including a powerful Nvidia X1 CPU, ultra-sharp 10.2-inch screen, and a latch-free docking mechanism that connects the Pixel C to an optional keyboard cover.

Luckily, Google’s description is on the money, and the Pixel C is one of the best Android tablets I’ve ever seen, if not the best – at least from a hardware perspective.

Watch: 5 things you need to know about the Google Pixel C

The Pixel C is one of a select few devices actually built by, rather than for, Google, following on from the firm’s previous Chromebook Pixel.

It aims to be “the ultimate Android tablet” for both work and play. Out of the box I can confirm it’s a big step up compared to the HTC-made Nexus 9 – Google’s other tablet. It’s got a minimalist metal frame, with the only real design feature being a light line along part of its back.

The tablet’s 517g weight means it’s fairly comfortable to hold and suitably satchel-friendly, although its front edges are a little sharper than I’d like.

The anodised aluminium used to build the Pixel C’s chassis also has a nice premium feel and left me suitably assured that it can survive the wear and tear expected of a daily-use tablet. Having accidentally dropped the Pixel C onto my flat’s hardwood floor I can personally attest to its durability. (Sorry, Google.) 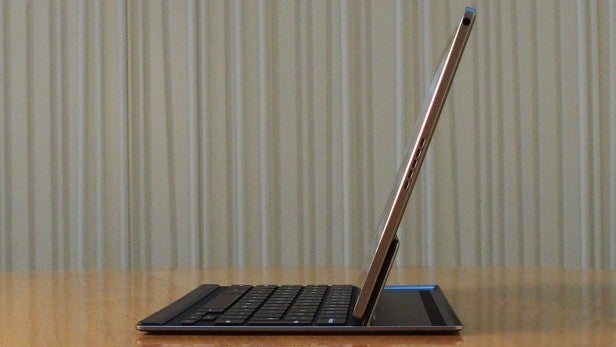 My review unit came bundled with the optional keyboard, which you can pick up for £119. It connects to the tablet using a new magnetic docking mechanism that doesn’t feature any fiddly hooks or latches.

All you have to do is hold the bottom of the tablet close to the keyboard and the two will snap together. This would be great if from there you could type away to your heart’s content. Sadly that’s not the case. Instead you have to pair the tablet and keyboard using Bluetooth.

This isn’t a deal breaker – plenty of competing convertibles do exactly the same thing – but I’m a little sad that the docking mechanism isn’t as simple as the Surface Pro 4’s Type Cover or iPad Pro ones, which works the moment you attach them to the tablet.

The keyboard’s occasional input lag, however, is a little harder to forgive. Once in a while the keyboard would stutter and ignore certain key presses, making typing on it a frustrating experience.

Outside these instances, as Android tablet keyboards go, the Pixel C’s is very good. The keys feel a little squished together, though I don’t see how Google could avoid this happening when you consider the Pixel C’s 242 x 179 x 7mm dimensions. They also partially make up for their bunched-up layout by having great travel.

My only serious concern is that, like the iPad Pro’s, the keyboard doesn’t have a trackpad. However, with the ability to connect a Bluetooth mouse to this device, this is less of a problem for desk-based work, although still a concern when it’s being used as a laptop.

The Pixel C comes loaded with a 10.2-inch display. This makes it one of the smaller convertible options on the market. The iPad Pro features a giant 12.9-inch screen, while the Surface Pro 4 packs a similarly large 12.3-inch display.

This may put off people looking for a bigger tablet, but again reinforces the Pixel C’s travel-friendliness.

When it comes to overall screen quality, the Pixel C is excellent. The 2560 x 1800 resolution gives it an impressive 308ppi (pixels per inch) density. This ensures icons and text on the screen are universally sharp and never difficult to read, despite the tablet’s compact dimensions. 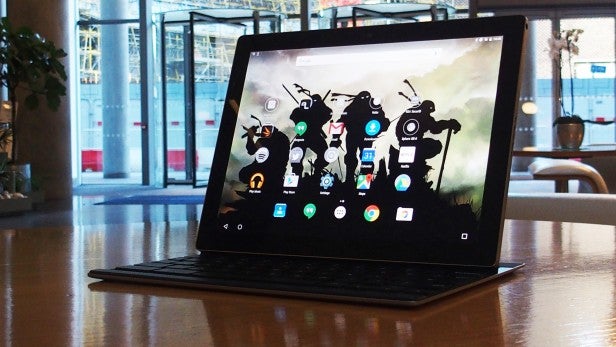 Colours on the Pixel C don’t look overcooked or too cool, as they do on many competing tablets. Viewing angles are also excellent and the tablet’s maximum brightness is dazzling – to the point that I had to set it to 60% to comfortably use it.

The screen does have a tendency to become reflective when hit by direct sunlight, but this is an issue on nearly all the tablets I review.