Ultrabooks are having an impact almost as big as the netbook did in its day. Basically powerful and stylish ultraportable laptops with 11-13in screens that are under 22mm thin and weigh less than 1.5kg, Intel’s Ultrabook standard could be considered the ideal all portable laptops should aspire to. They’re not just thin and light but also relatively long-lasting and powerful (you’ll never find an Ultrabook that stutters with HD video or can’t run Flash, for example), with a minimum of a ‘Sandy Bridge’ Core i3 CPU, 4GB of RAM and, crucially, SSD or hybrid SSD storage. This also ensures Ultrabooks are fast-booting and can resume from standby almost instantly.

But which one is the best? We’ve already looked at the Asus Zenbook UX31, Acer Aspire S3 and Toshiba Satellite Z830, and so far they’ve all had various strengths and weaknesses. Can Lenovo’s IdeaPad U300s be the Ultrabook to rule them all? 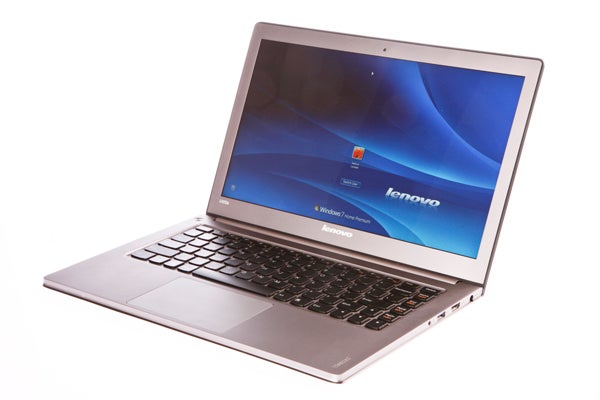 Specifications are generally what you would expect, though you do get a little more choice than most offer. You can go for either a dual-core Core i5 or i7 CPU, 4GB of RAM and a 128 or 256GB SSD. Only the S3 offers more configurations.

The U300s also gets off to a good start with its unique design. Rather than a front that tapers to a wedge-shaped point as most Ultrabooks and the MacBook Air do, Lenovo’s beasty maintains the folio look from its numerical predecessor, the IdeaPad U260. There’s even a protruding bottom lip to enforce this impression. It doesn’t work quite as well without the U260’s soft-touch leatherette finish, but it’s still attractive and different, and the unibody aluminium shell shouts premium. 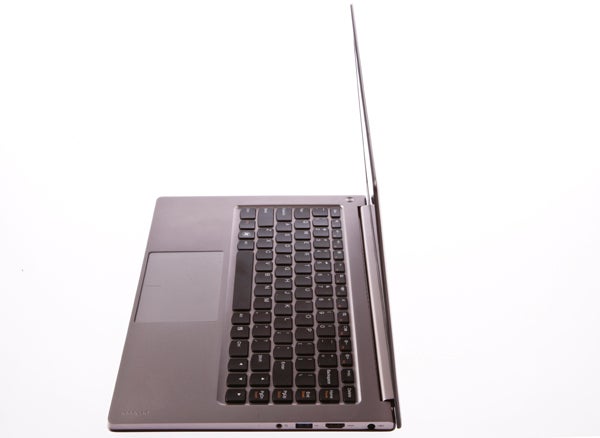 It’s also incredibly thin. We were impressed at the 16mm-thick Z830 (at its thickest point), but Lenovo’s laptop takes things a step further with a maximum thickness of 15mm. Whatever next, 14mm thin 13in Ultrabooks? Toshiba’s 1.1kg contender does still hold the weight crown though, as the U300s weighs just over 1.32kg.

Build quality is good. Though there’s some flex in the chassis and it doesn’t feel as solid as the Asus Zenbook, it’s still a lot more reassuring than the magnesium alloy Acer S3. Our only real complaint is that it seems to have sharper edges and in more prominent positions than even the Macbook Air. 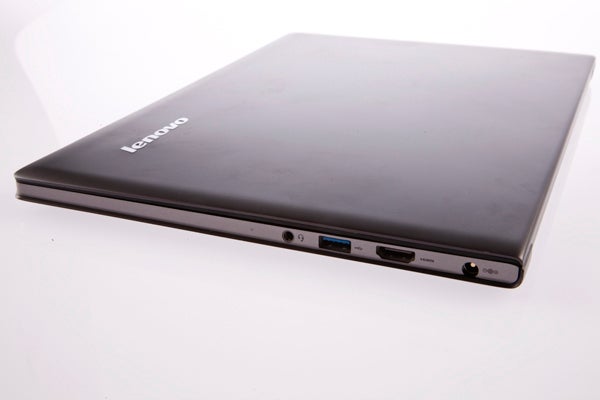 Connectivity is where the U300s encounters its first hiccup. On the left we have a single USB 2.0 port, while the right houses a nicely full-size HDMI connector and speedy USB 3.0 port along with a 3.5mm headphone/microphone jack. You might already have noticed the obvious omission here: an SD card reader. It’s something that, on the 13in models at least, every other Ultrabook and most ultraportables manage to incorporate, and it’s a potentially serious omission. You can always get a USB stick reader, but this shouldn’t be necessary with a premium laptop. 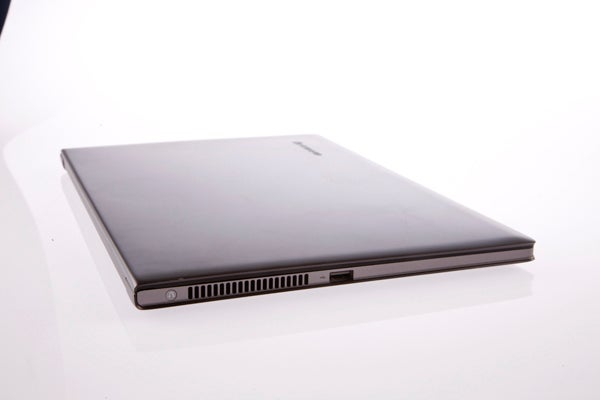 While we do appreciate Lenovo’s use of full-size HDMI, if connectivity is important to you the Satellite Z830 is still your best bet, followed by the Zenbook with its included adapters.

We’ve always been able to rely on Lenovo to create some of the best laptop keyboards going, and by the ultra-shallow standards of most Ultrabooks it maintains this legacy admirably with the U300s. Just to qualify, in no way is this keyboard as good as Lenovo’s chiclet efforts on ‘fatter’ laptops like its ThinkPad X121e, nor even quite up to that found on the IdeaPad U260.

However, it’s a large step above the typing experience of the Asus Zenbook, Acer Aspire S3 and Toshiba Satellite Z830. 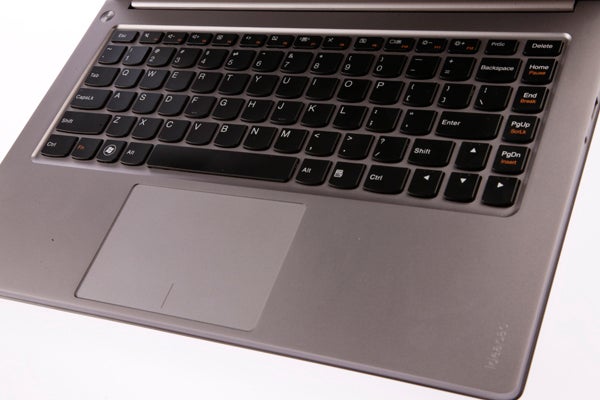 Though the left-shift key isn’t as long as we’re used to seeing on Lenovo machines, keys are well laid out and their curvy base gives them a little certain something which again helps the U300s to stand out from the crowd. Key travel is shallow but still deeper than rivals and there’s a nicely defined action to them. We do prefer a matt, lightly textured finish on our keyboards but the smooth semi-matt finish used here is in keeping with the Ultrabook’s metal aesthetic.

The only thing lacking here is keyboard backlighting, which means the U300s joins the club whose current members include the Zenbook and Aspire S3. While not essential, it’s always nice to have and does enhance the premium feel of a laptop, and after Lenovo including it on its ThinkPad X1 we’re disappointed by its absence. If it’s a must have for you, you may want to consider the Z830, MacBook Air or Samsung Series 9 900X3A. 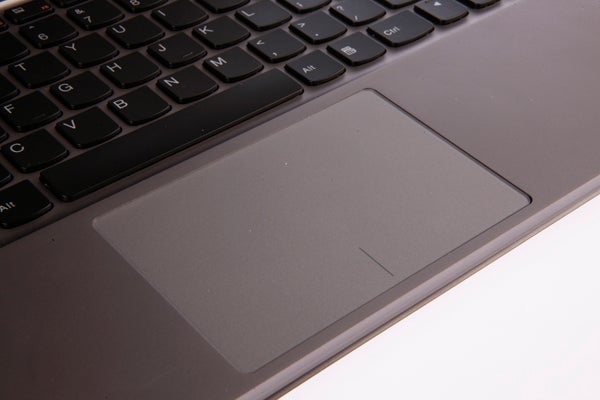 Thankfully, the touchpad is as nice to use as the keyboard. The buttonless glass-surface pad is huge, easily as large as that found on the Zenbook or Air, and as with those pads incorporates its buttons, delineated by a discrete stripe. These ‘buttons’ offer a deep, audible click. We’re glad to see Lenovo can still get it right after the somewhat awkward and jumpy pads on its ThinkPads since the X1.

Getting to the IdeaPad U300s’ 13.3in screen, it’s a fairly standard affair with a glossy finish, 1,366 x 768 resolution and using our least favourite panel tech: TN, with its inherently poor (in this case dismal) viewing angles. Thanks the contrast shift this causes, you need to position the screen fairly accurately and sit centrally to get the most out of it. Once you do, however, there’s plenty of good news. Colours are vibrant yet contrast remains good, with deep blacks, plenty of dark detailing and pure whites. 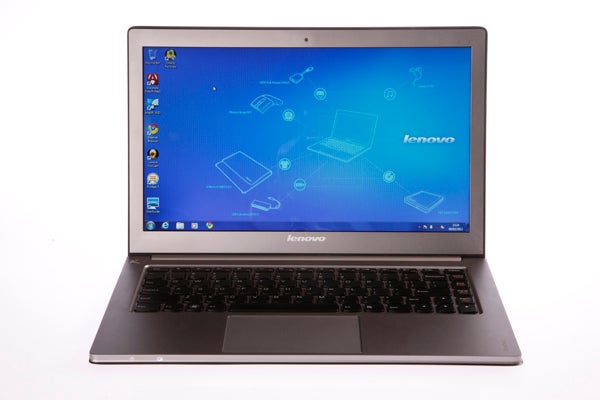 If you want the best screen on an Ultrabook-equivalent your best bet is still the Samsung Series 9 900X3A’s superb TN display (or Lenovo’s own X220 ultraportable with its IPS panel). The U300s doesn’t offer the resolution advantage of the 1,600 x 900 Asus Zenbook UX31 either, but it’s still one of the better examples we’ve come across – though that’s more an indictment of the poor quality of Ultrabook displays in general than praise for this one.

Frankly, we can’t wait till the Lenovo Yoga with its 1,600 x 900 IPS display gives us the kind of quality we’ve been seeing on tablets (like the Asus Eee Pad Transformer Prime) for a while now. 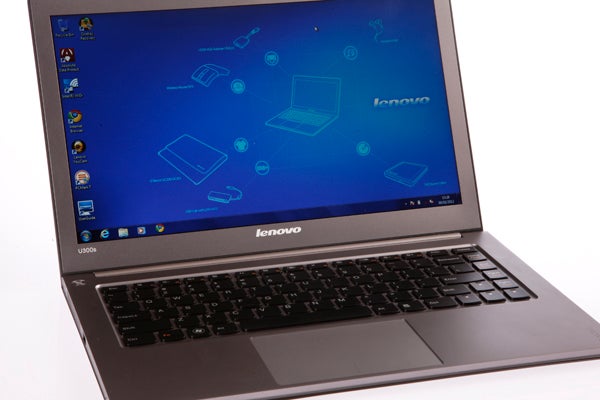 Audio, meanwhile, is quite good for an ultraportable. The U300s’ stereo speakers put out audible volume levels with only a little distortion creeping in at maximum. Otherwise production is quite detailed with a modicum of bass, adequate for light entertainment and even the occasional movie.

Ultrabooks are birds of a feather when it comes to performance, since they all share very similar specifications. The average user can buy an Ultrabook confident in the knowledge it will run most of what they might want, barring demanding games. As already mentioned Lenovo’s IdeaPad U300s is available in several different configurations: the M6844uk model with a Core i7 CPU, 4GB of RAM and a 256GB SSD, which will set you back around £1,200, or our M6845uk review model with a Core i5, 4GB of RAM and a 128GB SSD at just under £900.

To be honest, Intel’s dual-core ‘Sandy Bridge’ Core i5-2467M should be plenty powerful for most. It runs at 1.6GHz by default but can Turbo Clock to 2.3GHz with support for up to four virtual cores. Likewise a 128GB SSD is standard for the Ultrabook crowd and can always be supplemented by cheap external storage.

As ever, graphics is a weak point of the Ultrabook, which explains the U300s’ poor result of 13.8fps in Stalker: Call of Pripyat, despite running at a low 1,280 x 720 resolution and Medium Detail. In other words, if you’re into your gaming, this is not the machine for you, but the casual crowd should find performance here just about adequate.

It’s worth noting that the U300s stayed cool and quiet throughout our testing, which certainly can’t be said of all Ultrabooks.

When it comes to time away from a socket, Lenovo’s IdeaPad Ultrabook also puts on a strong show. In our low-intensity battery test it lasted seven hours and 18 minutes, just two minutes short of the reigning champion, Toshiba’s Satellite Z830. As this difference is within testing margins of error, we’re calling it a draw and declaring the U300s one of the longest-lasting first-gen Ultrabooks.

So how does the U300s hold up against the competition? In its reviewed configuration at £899, it’s one of the cheaper Ultrabooks available. Acer’s Aspire S3 starts at £680, but that’s for a Core i3 model with hybrid SSD/HDD storage and no USB 3.0. 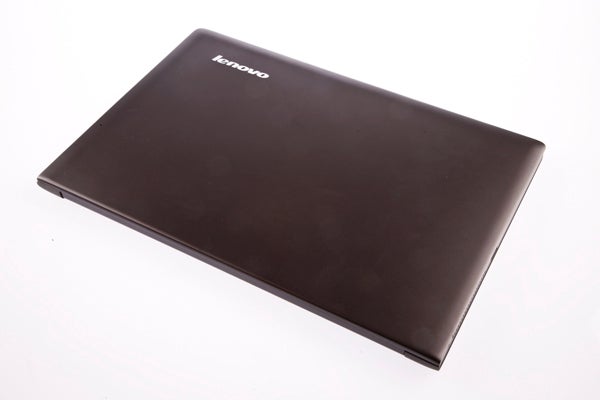 So Lenovo’s closest competitor here is the Z830, which costs around the same. Both of these laptops are comparable in terms of battery life and performance. The Z830 offers far better connectivity, lighter weight, a matt screen finish and a backlit keyboard, while the U300s gives you a more stylish and rugged chassis, better ergonomics and a superior quality (albeit glossy) screen. 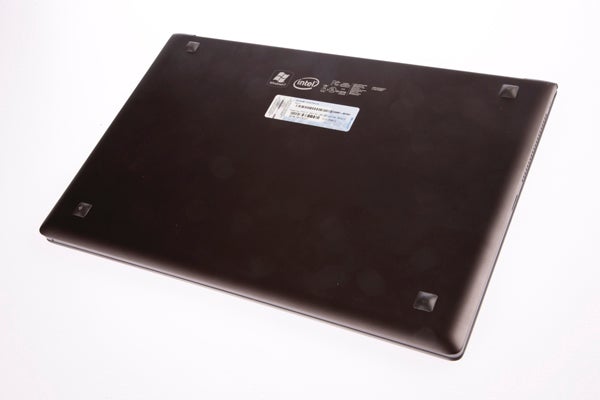 To be honest, if its lack of keyboard backlighting and SD card reader aren’t huge issues for you (both laptops have screens with poor viewing angles) we would probably choose the Lenovo, and if you’re after an Ultrabook on a budget it’s our top choice right now. However, none of the first-generation Ultrabooks have convinced us enough to choose them over the likes of the Samsung Series 9 900X3A if you can afford the extra outlay.

Verdict
Once again we have another excellent 13in Ultrabook entrant with just a few too many flaws to fully recommend it. Nonetheless, Lenovo’s stylish and ergonomic IdeaPad U300s is a strong contender, and at under £900 in its Core i5 guise it’s our favourite budget choice – if you can live with its screen’s poor viewing angles, lack of keyboard backlighting and absent memory card reader.