We should have known better than to expect a me-too product from TT Games and the Lego stable. Sure, you can position Lego Dimensions as Lego’s attempt to muscle in on the Toys to Life phenomenon, but instead of a rip-off of Disney Infinity or Skylanders we get a slick, sophisticated, anarchic mix-and-match game that grabs stars and settings from across the different Lego universes. What’s more, it’s combined with an approach to the Toys-to-Life genre that’s both very innovative and very Lego.

The good stuff starts when you open up the box. Lego Dimensions doesn’t come with a straightforward portal and ready-made figures, but a complex multi-part portal that needs to be assembled and figures that need putting together and attaching to their NFC bases. The base kit’s stars are Batman, Gandalf and The Lego Movie’s Wildfire, and you’ll need them assembled before the game starts. 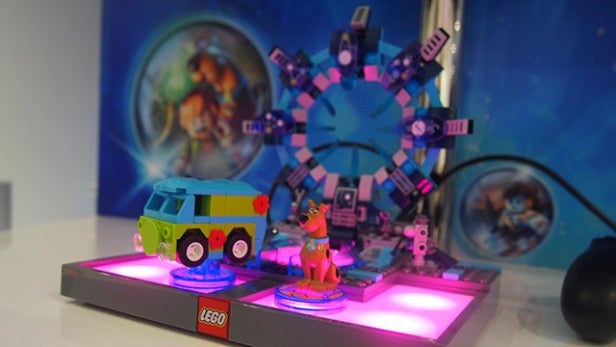 The portal takes a bit more work, but this is cleverly integrated into the gameplay, complete with on-screen instruction books to help you get all the different parts in place. Building has always seemed such a focal part of the Lego games that this all feels surprisingly natural, and when the game has you clipping on additions as the game progresses, it’s surprisingly tricky to remember that the game doesn’t actually know whether you’ve added them or not

Lego seems to have given TT Games the keys to most of its major Lego properties, and of the biggies only the Disney-owned Star Wars, Indiana Jones and Marvel licenses are missing, plus the Warner Bros. owned Harry Potter. How they cram it all in is quite ingenious, with a new villain, Lord Vortech, opening rifts in the different Lego dimensions, pulling in villains and collecting artefacts of universe-transforming power.  The only thing stopping him is your Lego heroes, starting with Batman, Gandalf and Wildfire but growing to take in any other figures you purchase. With The Simpsons, DC Heroes, The Lord of the Rings, Ghostbusters, Doctor Who and more up for grabs, you’re not short of options. 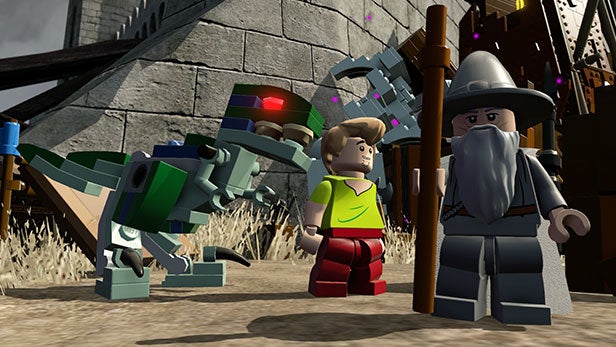 What makes Dimensions work so well is TT Game’s less than reverent approach to the various properties, and its infectious sense of fun. Each level takes our trio to a new Lego dimension, where they’ll foil Lord Vortech’s plans, defeat a range of enemies and try to solve some of the most ingenious puzzles the Lego series has fielded yet. There’s no nonsense about only playing heroes that belong to that dimension, and while the levels are designed with Wildfire, Batman and Gandalf in mind, other figures you have can join in, with the potential to access new areas or break new objects too.

You also have to love the attention to detail. For instance, Lego Movie characters are animated with the same, weird, stop-motion effect as their equivalents in the movie, while the Simpsons episodes are coloured and lit to look as Simpsons-like as humanly possible. A lesser Lego game might have had a Doctor Who level, but not one that made such great play with fan-favourite monsters or references to much-loved episodes. 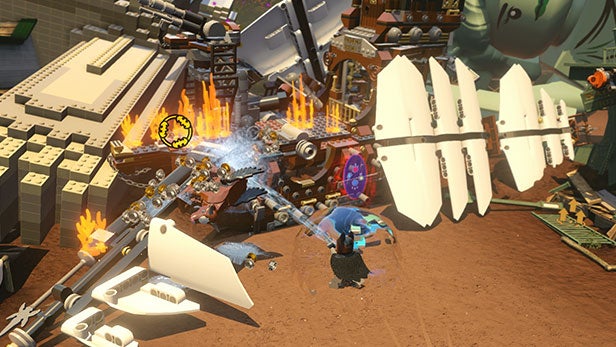 Up to a point this is classic Lego stuff. Bash blocks, bash enemies, build, use special powers, solve puzzles, enjoy cut-scenes, repeat. Yet Dimensions adds a whole new, well, dimension to the action in the way that it uses its portal. This isn’t just a simple, glowing pad like you’ll find in Disney Infinity or Skylanders, but a complex, multi-point portal with coloured lighting, all under the game’s control. Not only does the portal know which character you have where, but it can transfer properties from portal to character or character to portal.

Collect new fragments, for example, and you unlock new machines. Activating these will activate specific mechanics. There may be glowing coloured vortexes that appear within a scene. Place the figure you’re controlling on the section of the portal that glows blue, yellow or pink, and you’ll find your character sucked into a sudden vortex and spat out through its appropriately-coloured twin. Sometimes you’ll be charged with turning the three main portal regions to a specific colour, by passing your hero through an ink blob then placing their figure down on the pad. Soon the portal becomes key to elemental powers, while it plays a role in Wildfire’s Master Build ability. It helps make the portal and the figures so much more than just a trigger for something in the game. It makes the toys feel a crucial part of the whole experience. 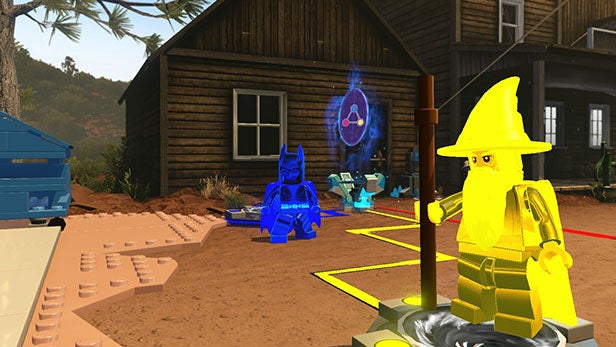 The only downside of this is that some kids – and some adults – might find this stuff confusing, and it took a little while before my Daddy-Daughter test team got into the swing of things. It does become second nature, though, and in a way getting it wrong can be part of the fun. After all, this is a Lego game. It’s not like you’ll be killed or anything.

Together, Dimension’s mix-and-match ethos and the innovative portal elevate it above other Toys-to-Life games. It also helps that the script is do damn funny, dishing out one-line after one-liner to the grimly humourless Batman, and making good use of a motley crew of stars and villains. Many are voiced by the original actors from the movies or previous games, and when your cast includes Dan Ackroyd, Michael J. Fox, Gary Oldman, Christopher Lloyd, Will Ferrell and Peter Capaldi, it’s clear that TT Games and Lego aren’t messing around. 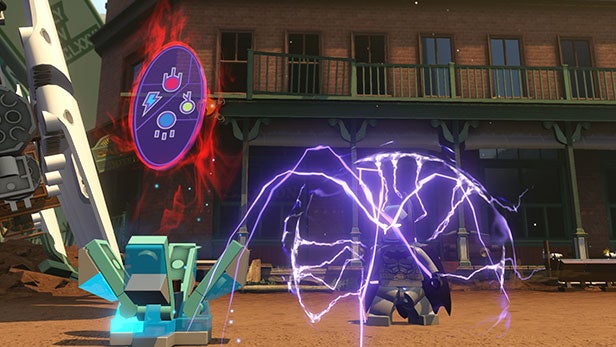 At its best, the game is laugh out loud funny, but also unpredictable. As each level loads you’re left wondering where you’re off to next – Marty McFly’s Hill Valley? Homer Simpson’s Springfield? Lego’s own Ninjago setting? – and who you’ll meet there. Villains from one dimension might find their way into another, while our dynamic trio may meet anyone from Doctor Who monsters (vintage or modern) to the Wicked Witch of the West.

Beyond the core story missions, having a figure that belongs to a certain property will open up a sizable open world for that dimension, with challenges to complete, structures to rebuild and plenty to explore. These are a little sparse, if truth be told, and nowhere near as engaging as the main story missions, but we’d hope that this is something Lego can build on with time. Sure, it’s great to be able to rove around Middle Earth or Gotham with a gang of miscellaneous Lego stars – and you can cram seven onto the portal at a time. All the same, you can’t help wishing there was just a little more to do when you got there. 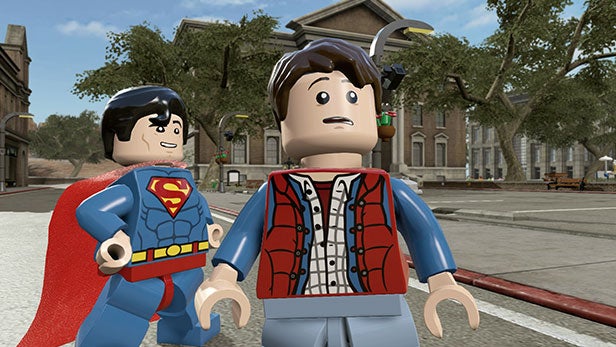 As with so many Toys to Life games, the sticking point is money. Here Lego Dimensions bears a bigger burden than most, with a price of between £75 and £85 for the starter set, depending on which version you get. This is effectively one game for the price of two, and while there’s a lot of content in the main campaign, plus three dimensions to explore, you still have to think long and hard about the value.

For me, Dimensions just about gets away with it. The built-in kits are cool and the portal more sophisticated, playing a genuine role in the gameplay beyond simply telling the game which figures are in play. Where it’s on shakier ground is the add-on packs. These kick in at around £25 to £30, and while they open up another dimension and give you a new story mission to play through, you’re still paying over the odds for a couple of figures and some DLC. 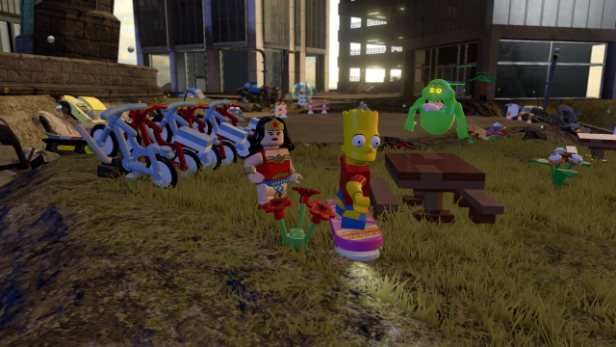 The problem is that they’re so irresistible. Playing Back to the Future with Marty McFly, the DeLorean and the 2015 (sigh) hoverboard is almost too much fun, with Marty voiced by Michael J. Fox and brandishing a ready-to-shred electric guitar. Once you’ve got that, you’ll be wanting Ghostbusters, The Simpsons and the Lord of the Rings packs too, and that’s before the kids start pestering you for Jurassic World and Doctor Who.

In short, things are going to get expensive, yet it’s surprisingly difficult to grumble. TT Games has crafted something wonderful: a Toys to Life game that doesn’t just make the genre feel fresh and exciting, but does the same for the Lego series – itself in danger of growing stale. We’d love Lego Dimensions to be cheaper, but come on, take our money before we change our mind.

Verdict
More than just a me-too Toys to Life game, Lego Dimensions is both a high-point for the genre and the best Lego game since Lego: Marvel Super Heroes. Be warned: the add-on packs will soon get irresistible and expensive, but the starter pack delivers enough fun to just about justify a rather jaw-dropping asking price.