Success always brings pressure, and the more successful Skylanders has become the more pressure there is on each new version to add a new killer feature, fight off its toys-to-life rivals and flog more plastic toys to an audience that’s notoriously fickle. There are signs of this pressure in Skylanders: SuperChargers, but overall it holds up pretty well. Sure, you can argue that this year’s feature is really just a gimmick, that the designers are running out of inspiration and that Activision’s business model is more mercenary than ever, but the fifth Skylanders in five years deserves a little more credit than that.

The game isn’t shy about revealing its major new feature, introducing it minutes after throwing you into a plot that’s so slight even the game doesn’t waste much time explaining it. To paraphrase, the series’ constant villain Kaos, has used the power of the Darkness (presumably neither the rock band, nor the hellish power of comic book and game fame) to imprison Master Eon, take over the Skylands and prevent this world’s portal masters from interfering. Luckily, your sidekicks Flynn, Cali and Hugo have found a flaw in Kaos’s plans; combining the powers of the supercharger skylanders with those of their supercharger vehicles to break through the villain’s obstructions and enable our new portals to once again connect with the Skylands world. 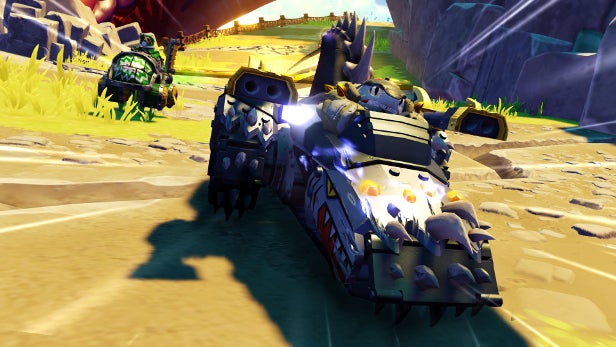 Vehicles, are very much the thing and the game brings cars, aircraft and submersibles into the Skylanders world for the first time. You can’t take them everywhere, with each regular Skylanders platforming level featuring clearly marked trigger points for a four-wheeled, aerial or nautical adventure, but when you reach those points the game changes completely. Ground vehicle sections take you on chases through twisting courses, or pit you in an arena against enemy drivers. Air vehicle sections see you chasing fleeing foes or battling fighters, while in mixing air-race sequences with Starfox-style action. Water vehicle sections feature races where the courses run both above and below the water, plus more arena battles against bosses and enemy subs.

On their own, none of the vehicular activities would make much of a game. The aerial sequences have plenty of spectacle, but not the graceful motion and imaginative set-pieces of a Starfox or Star Wars: Rogue Leader. The arena fights suffer from slightly awkward twitchy controls and the odd bad camera angle. The use of surface and underwater routes in the boat sequences is actually quite brilliant, pushing you to switch between the two to avoid deadly obstacles, but too many of the courses are all bombast and no flow. Yet in the context of this particular game, it all works, much as the different side activities worked in the Jak and Daxter or Ratcher and Clank games. 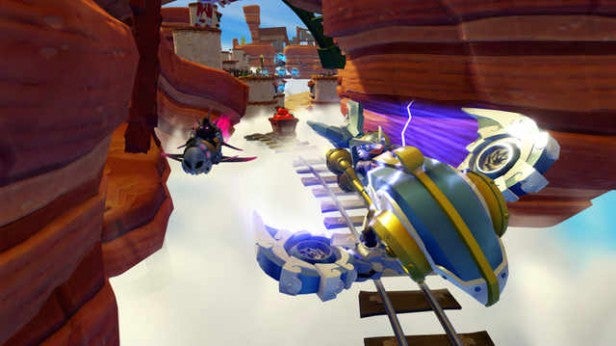 What’s more, these sections grow more interesting and experimental as time goes on. Sure, there are some slightly dull aquatic boss battles to grind through, but there’s also a fantastic underwater side-scrolling shoot-em-up section, and chunks that riff on older retro titles. Sometimes you get the feeling that the team at Vicarious Visions have grown a little bored of the standard Skylanders formula, and are using the vehicles to explore new twists on classic game designs. Plus, as vehicles are upgradable with different parts and perks, just like the normal figures, it’s not long before this adds to the game’s addictive, Diablo-esque loot and upgrade cycle.

Some of this has rubbed off onto the platforming segments too. At first, it’s all a bit tedious and generic, with levels that could have come straight from either of the last two Skylanders games, boring enemies, dull-witted puzzles and no sign of imagination. Give the game a chance, however, and Vicarious Visions start to mix things up, with arcs of electricity and clouds of gorgeous volumetric mist to add excitement to a high-flying city, or a brilliant prison level full of portals, perspective tricks and fun bomb puzzles. I’m not talking Super Mario 3D Land or Psychonauts levels of genius, but better stuff than you might expect from the fifth Skylanders in five years. 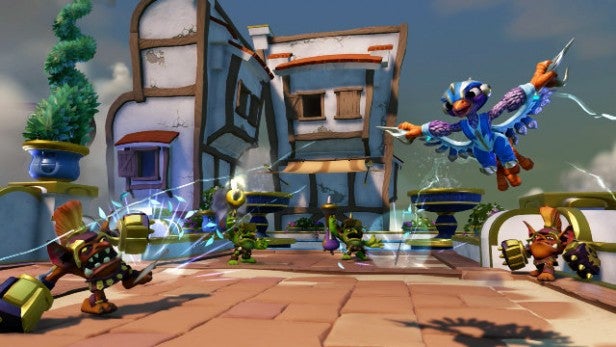 The production values also keep getting better. While the last-gen consoles – plus tablets – are still being supported, there’s a sense that the team has been allowed to make more use of newer consoles power this time around, giving players higher-quality cartoon graphics, more detailed environments and some brilliant effects – like the aforementioned clouds and rippling water. The soundtrack hits all the right adventure movie notes, and the voicework is consistently polished with a nice, knowing sense of humour that should appeal to adult gamers as much as kids. I’d ask for a little less Flynn next year, with the narcissistic flying ace rapidly turning into the Skylanders equivalent of Joey in Friends, but overall this is entertaining stuff.

Now, here’s the thing: At this point I was fully prepared to rip into Skylanders: SuperChargers and denounce it as Activision’s worst, most exploitative cash grab yet. The reason? The starter box only comes with a ground vehicle, Hot Streak, its driver, Spitfire, and the revamped Super Shot Stealth Elf. This means that vast chunks of the game are off-limits unless you cough up extra for a water vehicle and an air vehicle, at roughly £15 apiece. This has always been a problem for the series, with each game locking off areas unless you had a Skylander of the right element, and the last one asking you to pay even more for the coloured plastic villain traps on top. 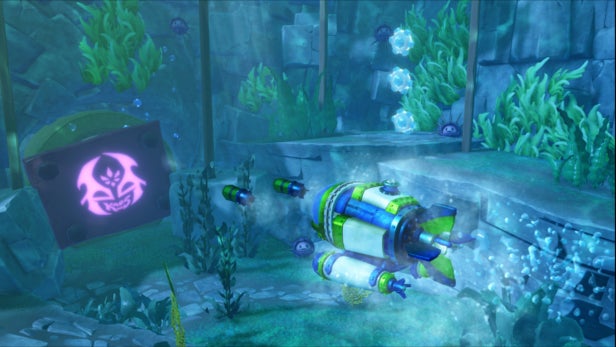 This time, however, the locked off sections aren’t just bonus areas, but pretty substantial chunks of gameplay which seem integral to the game. Sure, you can complete Skylanders: SuperChargers without buying anything more than the Starter Pack, but you’ll leave each level feeling that the job has only been half-done. In short, Skylanders: SuperChargers isn’t really a £50 game but one that costs you close to £80.

That’s a lot of money, though Activision should be praised for giving existing Portal Masters a slightly less expensive option. The digital download Portal Owners Pack gives you the new game and virtual versions of Spitfire and Hot Streak to play through it with, plus the option to use an existing portal with your existing skylanders – all fully playable in this game. That brings the price of entry down to £40 and the cost with water and air vehicles down to £70. 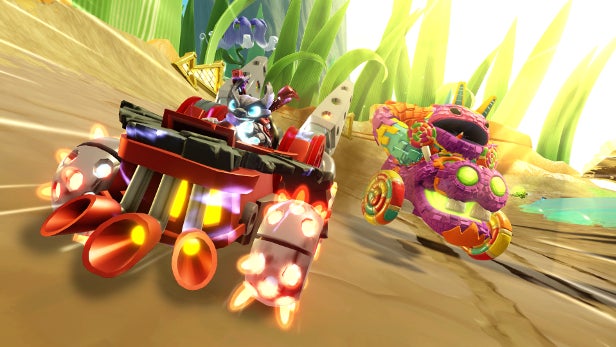 There’s also some good reason to take it on the chin and pony up. For one thing, the new vehicle toys are particularly cool, though the coolest – the bony Fiesta’s brilliant Crypt Crusher – is a bit extraneous when you already have a ground vehicle in the pack. For another, you don’t actually need to budget much for additional figures. There are benefits to pairing the right Skylander with the right vehicle, as a) the new figures are especially good and b) this supercharges the combo for additional power. However, any old skylanders you have will knocking around will still do just fine. Most importantly, you’ll want the vehicles because they let you get more out of SuperCharger’s secret weapon: a built-in Mario Kart clone.

Skylanders has always been good for multiplayer, and SuperChargers is just as much fun co-op as previous instalments (though we wish they’d bite the split-screen bullet rather than tether the two heroes together). This year’s model adds, for the first time, online play, so that you can play co-op or competitive modes with people on your friends list. However, what’s really caught my interest is the addition of a racing section in the game’s Academy hub, where you can race solo, two-player split-screen or four-player online across a series of courses, some in the air, some on water and some on the ground. 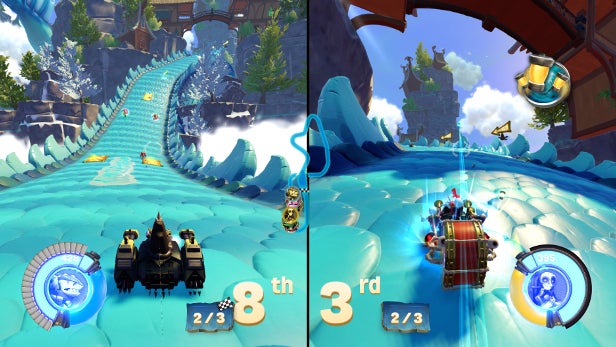 ‘So what?’, you might think, ‘who needs another half-baked Mario Kart
clone?’. That’s what I thought going in. Yet the courses turn out to be
impressively detailed and inventive, with multiple routes, clever
power-ups and some inspired moments. The racing isn’t Mario Kart 8 good,
but someone has clearly been playing enough Mario Kart to make it fun.
The road tracks are packed with jumps and Skylands-themed obstacle, such
as the chompies on the Chompy Garden course. The air courses are
crammed with sneaky shortcuts and speed-boosting rings. The water
courses, meanwhile, make full use of a choppy surface and underwater
shortcuts to give you a new take on the old Waverace theme. On top of
that, there are different challenges for different driver/vehicle
combos, meaning you get more actual gameplay out of all those Skylanders
and vehicles you’re collecting.

Getting hooked on race mode might mean additional costs, though. While the starter pack contains six courses – two land, two water and two air – Activision plans to flog you extra content in the form of Action Racing Packs, each containing a Skylander and vehicle combo plus a trapping crystal to unlock additional courses. Your kids might not mind paying out for more shiny toys just to unlock DLC, but if the thought of splashing out even more sticks in your craw, prepare to choke. This year’s Skylanders could be merciless on your wallet, if only because those toys are so desirable and the game so much fun. 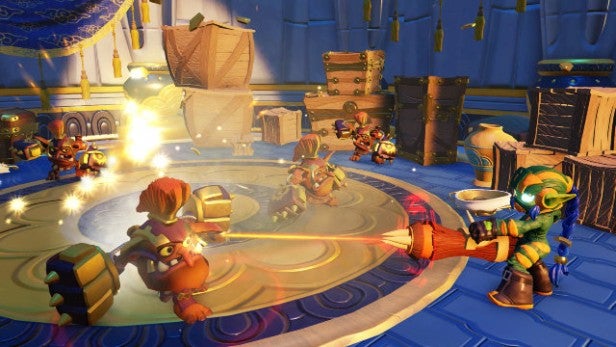 Get the Skylanders habit and the costs soon mount up, but overall the toys, the revised gameplay, the length, number and quality of the levels and all that karting action makes for a generous package that’s a lot more compelling than you might expect. There’s still a sense that the series needs to innovate more to make next year’s inevitable outing worth getting, but this year’s Skylanders hasn’t buckled under all that pressure. Surprisingly, it’s flourished.

There’s a lot of fun to be had in this year’s Skylanders, with the new vehicle content being more than just another gimmick. The inventive platforming and a fantastic Mario Kart-style sub-game also help keep things feeling fresh. On the downside, it’s also the most expensive Skylanders yet, requiring an investment of nearly £80 to get the most out of the game. On balance, the generous package and the cool toys make it all worthwhile, but prepare to empty your wallet during the year ahead.