Available on Xbox 360, PS3, Xbox One (reviewed), PS4, Wii U
With each successive version, Disney Infinity looks more unstoppable. Where version 1.0 united the worlds of Disney and Pixar, from Pirates of the Caribbean to The Incredibles, Disney Infinity 2.0 bought in the Marvel universe, with the only console game covering the year’s two hottest cinematic properties, Frozen and Guardians of the Galaxy, not to mention The Avengers and Spider-Man.

Now version 3.0 adds the Star Wars galaxy to the platform, with one of the two new basic sets focusing on the prequel trilogy/Clone Wars era, while an add-on playset (which we’ve yet to get our hands on) introduces the original trilogy. Given that the other basic set covers Pixar’s Inside Out, while a Star Wars: The Force Unleashed playset is all but assured, it’s hard to imagine how Disney could make Infinity more irresistible without bringing in Harry Potter or Jurassic World (there must be limits to what even the House of Mouse can afford to buy).

But are the games getting better? Last year’s effort was a case of yes and no. On the one hand the Toybox element – the bit where you can create your own worlds and then set your favourite Disney/Pixar/Marvel characters loose on them – was both more accessible and more fully-featured. On the other, the playset campaigns were a little tiresome and repetitive.

Playing with The Avengers, for instance, you were stuck bashing frost giant after frost giant over a range of levels, getting frustrated by bizarre time limits and wishing you were playing Lego Marvel Super Heroes instead. This wasn’t great. 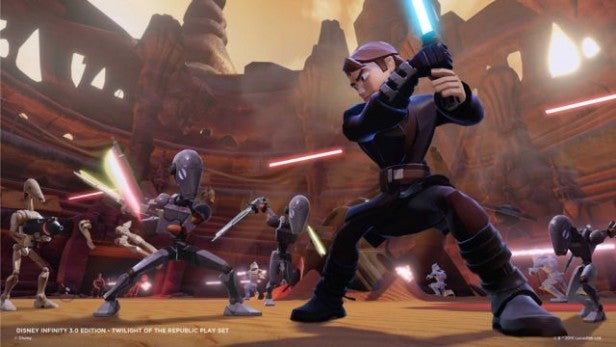 This year Disney has played things smarter. Get the base set with Anakin Skywalker and Ahsoka Tano and you get an all-action campaign, Twilight of the Republic, developed by Infinity’s main team, Avalanche, in partnership with Ninja Theory.  Yep, that’s the Ninja Theory of Heavenly Sword, Enslaved and DmC fame.

Pick up the Inside Out playset with Joy and Anger, and you get a puzzle platformer developed by Avalanche themselves, who between the Tak games and Toy Story 3 have a pretty strong history in the genre.

The other Star Wars playset, Rise Against the Empire, comes from Studio Gobo, who put together the Pirates of the Caribbean campaign (the best one) from the 1.0 release. 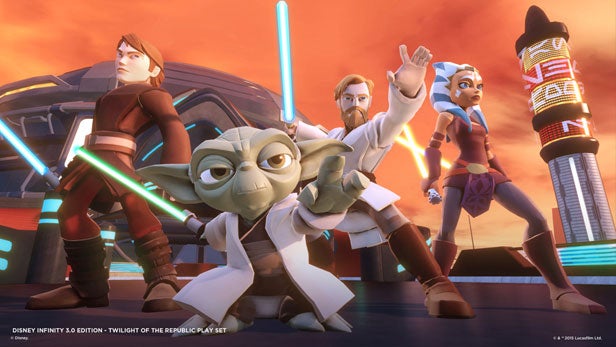 Now consider that a forthcoming expansion set, Toybox Speedway, is being developed by the racing specialists at Sumo, and it’s clear that a new strategy is in place. Disney is bringing in established talent to give each campaign its own style and raise the bar on quality.

In the most part, it works. Nobody’s going to suggest that Twilight of the Republic is a kiddie-friendly, Star Wars-themed DmC, but it has solid lightsabre combat, some decent platforming sections and big environments with a string of main missions and a bundle of side missions. It even crams in space combat.

It’s a little disappointing that only two characters per set are included this time around, where last year’s base sets bought us three, but both Anakin and Ahsoka make lively progragonists, and each can be levelled up and given new capabilities from a skill tree to boost their offensive and defensive powers.

As you fight your way from Geonosis to Coruscant and Tattooine, you’ll fight increasingly challenging droids and hired killers, get involved in some pretty cool chase sequences and tackle some fun platforming sections. Not bad at all. 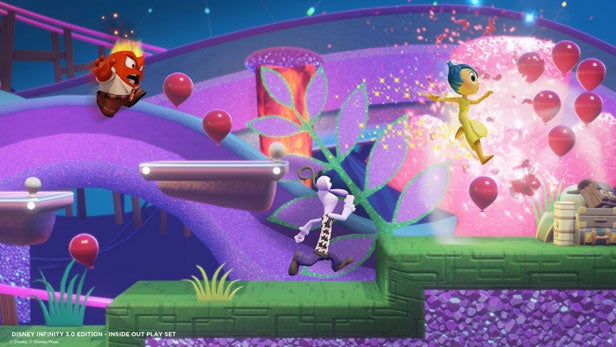 The Inside Out campaign is better still. Avalanche proved with the Toy Story 3 tie-in that it knew how to put together an inventive platformer, and this one has some clever 2D and 3D levels with a nice emphasis on puzzles over serious skill challenges. One level might see you switching between Joy, Anger and the other emotions to harness each one’s special abilities. Another has colour coded switches which operate matching platforms and mechanisms.

Again, it’s not as good a game as your average Mario or Rayman title, but it’s in a different league from the sort of generic tie-in guff we used to see pushed out with Pixar movies. It’s a really bright, colourful experience that should go down well with fans of the film. There’s even a fun match three puzzle game to unlock levels.

Neither campaign is perfect, and it’s arguable whether either is made better by being tied into the toys or the Infinity platform. Would Twilight of the Republic have had even better movement and combat had Ninja Theory had more scope to customise the engine and controls? Maybe. Does Inside Out benefit at all from the ability to stick a plastic figurine of Joy on a glowing circle? Probably not. In fact, does the platforming in Inside Out sometimes require a little more finesse than the controls allow for? Unfortunately, yes. Still, if the rival Skylanders series beats Infinity on straight single-player and co-op gameplay, then at least the gap is narrowing. Even without the Toybox stuff, Disney Infinity 3.0 is fun. 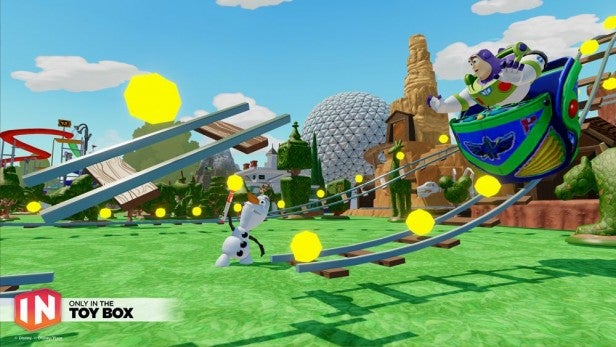 It’s still, however, the Toybox mode where Infinity really comes alive. Here the focus appears to have been on giving players an easier way into the different supported game styles and creating their own worlds, while adding a wider range of tasks to give those without the urge or patience to get creative more to do. There are even more platforming, stunt-driving, combat and racing challenges than ever before, including some entertaining efforts that replicate old-school arcade classics like Frogger (or Crossy Road as you might know it).

There are building challenges, where you can learn how to build and edit worlds while you play. There’s also more structure and more to do within the Interiors house-building and customisation mode, as guests quiz you on trivia or request new rooms or decor. And that’s without the sidekicks stuff, where you house, equip and train favourite characters as helpers, then level them up by farming food for them to eat. All in all, Infinity 3.0 has a breadth and depth that the previous two versions didn’t have. 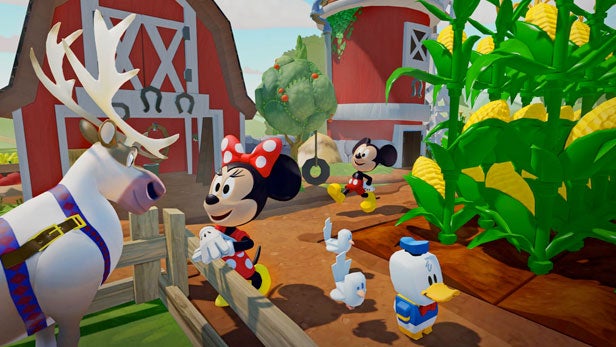 Avalanche has done more work on accessibility too. While actually building anything worth exploring is still a real challenge, there are more helpers and automated systems than ever before, not to mention more pre-built mechanisms, spawners and objects, making it a lot easier to put together, say, a basic platform level or a race track. What’s more, the community features are now easier to get to, with two new buildings in the hub – Flynn’s Arcade and the El Capitan movie theatre – taking you off to online multiplayer and community-made content.

On the one hand, the sheer amount of content, tasks and activities in the hub makes it harder to get to the actual creative tools; it took us a while to work out how you actually kicked off your own world. Yet it also leaves you more prepared when you get there. You still won’t get anywhere on the creative side without committing some time and learning the ropes, but the huge success of Minecraft has proved that younger gamers have a real appetite for creation and customisation, and the arrival of more Star Wars and Marvel-themed building blocks and décor – not to mention some cool Elsa’s Ice Palace stuff from Frozen – should be enough to reinvigorate their interest. 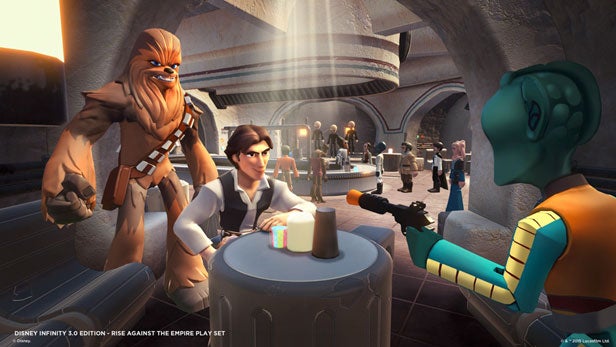 The biggest issue, as with all toys to life games, is the spiralling costs. In a way, the original Disney Infinity provided the best value, giving you three figures and three different campaigns within the one base set, though you needed additional figures to play co-op. Now you get just the one campaign in each £45 base set plus all the basic Toybox content, and to unlock additional campaigns and associated Toybox content you’ll have to pony up £25 for additional playsets.

To play as other characters you’ll then have to find roughly £13 per figure – and while you can use existing Infinity figures in the new Toybox, only the relevant figures are playable in the new campaigns. We have to wait for an additional expansion, Toybox Takeover, before we can mix and match Infinity’s different star properties in a real campaign. 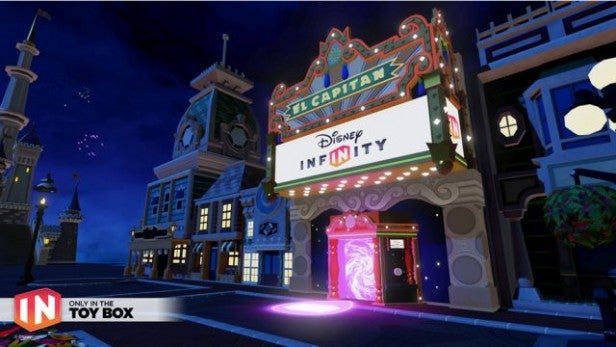 Despite this, there’s a lot to like about Infinity 3.0. As we’ve said, if you just want a toys to life game to entertain the kids, then Skylanders remains the stronger franchise and makes more use of the toys – though you might want to hold off on pre-ordering Skylanders Superchargers until we’ve given it a full review. Infinity is improving here, though, and it’s by far the better bet for more creative and exploratory play. As a toy, it gives young gamers more scope to engage imaginations and make the different worlds their own, and while Minecraft and Project Spark are arguably better for creating and simplified coding, it’s hard to beat the appeal of Infinity’s stars and settings. As a platform for creative play, Infinity’s still far from perfect, but it’s definitely heading in the right direction.

Verdict
The biggest and best Disney Infinity yet, with more activities to get you started in the Toybox mode, and stronger playset campaigns when you just want to play a game. The lure of Star Wars will be enough for many gamers, but it’s still the creative stuff where Infinity shines, giving kids not just the chance to explore the worlds of Disney, Pixar, Marvel and Star Wars, but the power to build their own.