The Xellence don't quite live up to their name. Performance is reasonable, and worth a look if you're interested in stylish true wireless earbuds with some interesting features, such as sound personalisation. But the competition is tough: with the likes of the Sony WF-1000XM3 around the same price, the Kygos can’t quite compete at the level required.

The Xellence true wireless from Kygo are the Norwegian audio lifestyle brand’s top-tier earbuds, packing style, sound personalisation and noise cancellation for around £200.

As an audio brand, Kygo hasn’t quite won me over. The Xenon over-ears were good, a solid performer at a price that was easy to live with, while the A11/800 and E7/1000 both presented ups and downs.

So, I’m hoping the name Xellence is a good omen. On paper, there’s plenty of promise and intrigue – so can Kygo deliver?

The Kygo Xellence were announced in late 2020 and went on sale in the UK not long afterwards. Currently, the earbuds are priced at £179 / $239 / €199, which is quite decent for a pair of ANC true wireless.

Kygo Xellence design – Cool looks, but not the best fit

As per Kygo’s other headphones, the Xellence are a distinctive, minimalist-looking set of buds. Available in black and white colour options, each bud features an ‘X’ that lights up, if you choose so in the companion app. The touch-control plate is a flat, circular surface with a slick silver trim running around the outside edge, and the main body features a sculpted profile that narrows into the ear tip like a corkscrew. 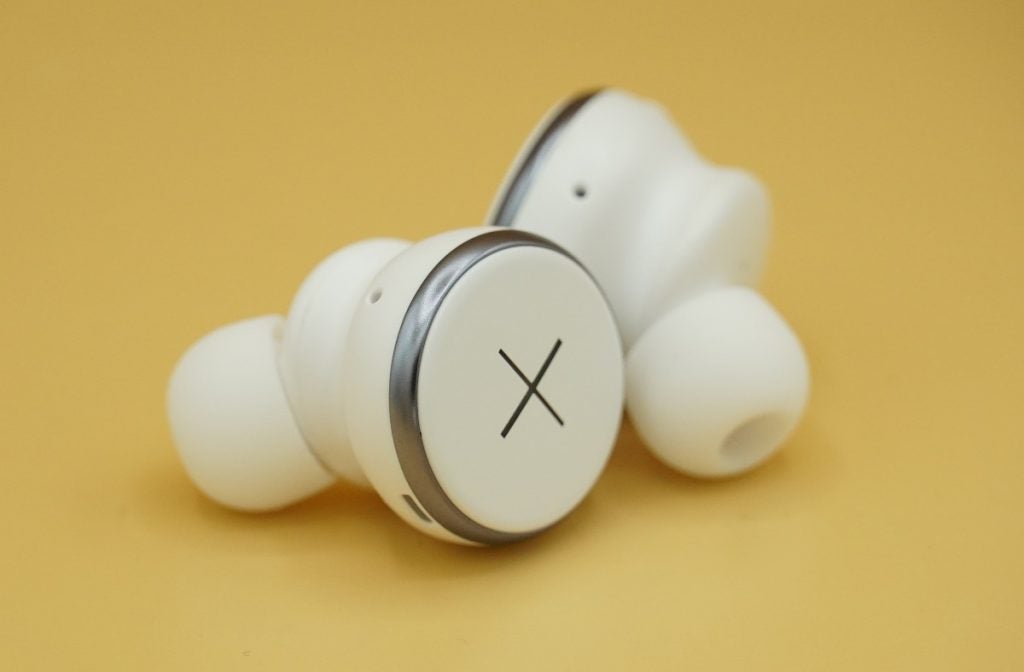 The intent – I imagine – is to provide a fit that works for a number of ears. Unfortunately, my ears don’t appear to be covered. Wearing the Xellence, they’ve never felt truly secure, the looseness affecting the earbuds’ seal. The Xellence come with five silicone ear-tips to fine-tune that fit, but I can’t say that I’ve had much success.

Pushing and holding down the button found towards the edge of the buds brings up Siri/Google, or whichever digital assistant you prefer. The placement seems rather baffling: to access it, you’ll be fiddling between your earlobe and the earbud, which simply dislodges the fit. A smarter decision would have been to place that button on the top edge for easier access.

The Xellence’s control scheme amounts to a tap to adjust volume; two taps for play/pause; three taps to skip through the headphones’ modes; plus a long press to skip tracks. It’s responsive, although I feel it would have been more intuitive to switch the number of taps for volume and playback around. While the Xellence look smart, from a design standpoint there’s a feeling of trying a little too hard.

The Xellence are rich in the feature department. There’s hybrid active noise cancellation, Bass Boost, IP resistance and 30 hours of battery. As such, they tick most – if not all – the boxes for a £200 pair of true wireless.

My experience of the Xellence’s noise-cancelling performance has been lukewarm. I’ve read strong notices of the Xellence’s performance elsewhere, but in my estimation the level of suppression they produce is just okay. I can still hear sounds around me – a motorbike revving in the distance, for example – and even changing the ear-tips, results have been similar. There have been times, too, where the noise cancelling simply didn’t engage when toggled on in the app. 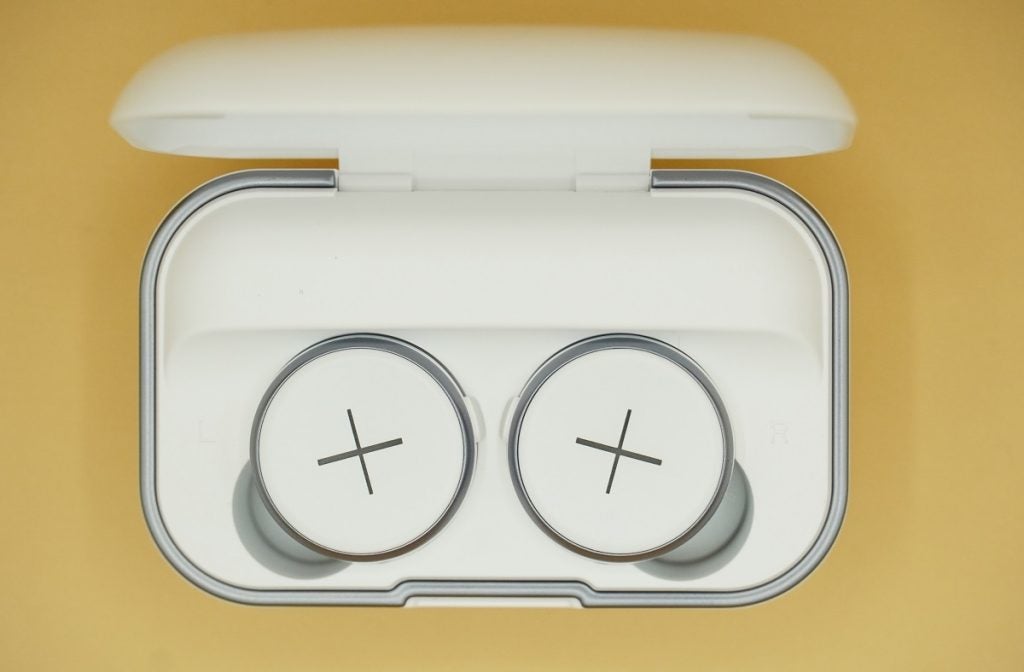 The Xellence appear more reliant on volume to provide that barrier to external sounds, and once an appropriate level has been found, a decent amount of outside noise is filtered out. Compare them to the Bose QuietComfort Earbuds though, and the Bose are in a different league altogether.

The Ambient Sound Mode fares a little better. Considering the strength of the noise cancelling and seal, the swing isn’t as big as I’d like. There’s some peculiar noise to contend with, but there’s enough clarity for awareness of the immediate surroundings. The noise can become annoying when no music is being played, though. 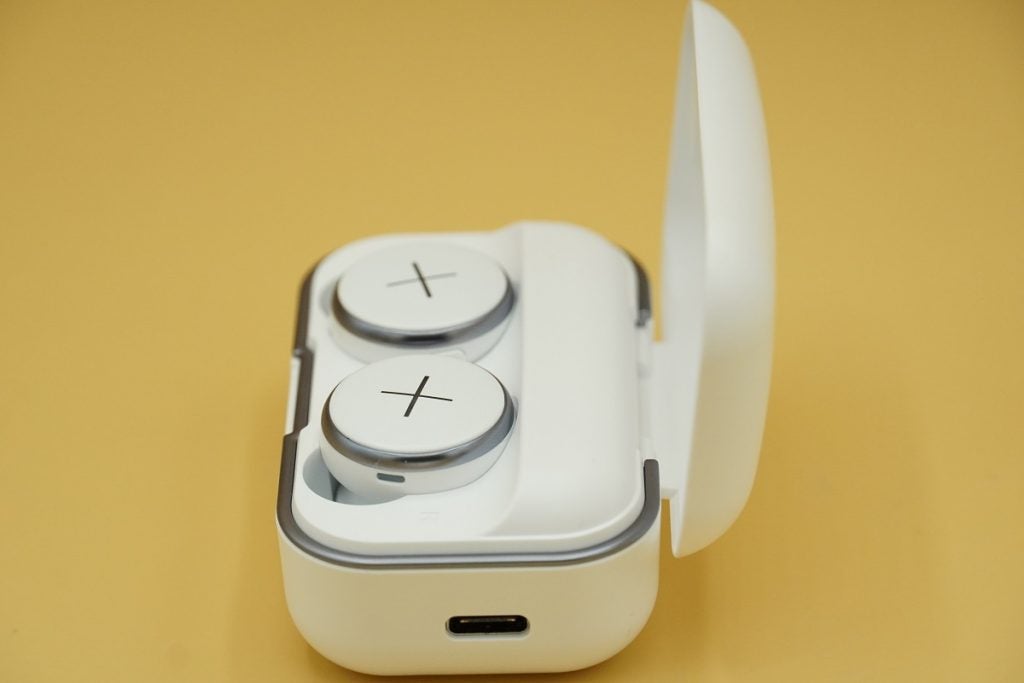 With an IPX5 rating, the Xellence resist sprays of water, which may make them useful for running and/or fitness purposes if you can get a solid fit. Battery life is quoted 30 hours – 10 hours per charge – with ANC off. With it on, the figure drops to eight hours (24 in total) – but either figure represents good value, and should be enough to last several days. Fast-charging is supported, too – 15 minutes for a further two hours through the pocketable (and stylish) USB-C charging case.

As mentioned, there’s a companion app – X by Kygo (Android/iOS), which isn’t to be confused with Kygo Sound app. From what I’ve been told, the Xellence true wireless require features that can’t be supported by the Sound app, hence the need for two versions. Inside the app are toggle switches for Bass Boost, ANC, Ambient Sound Mode, LED light for ‘X’ logo and Proximity Sensor (auto pause functionality). The most interesting is right at the bottom, in the Mimi Sound Defined profile. 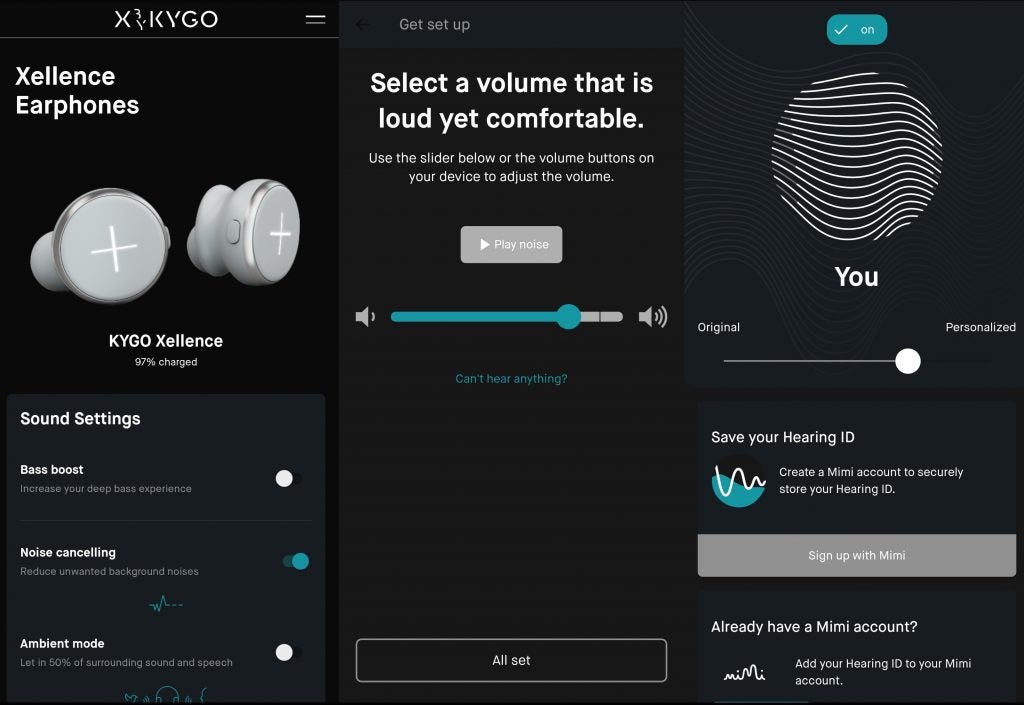 Mimi is a company that works in the field of sound personalisation. I met representatives from the company when they were bringing their technology to Loewe TVs. Run the test and listen out for the disappearing ‘beeps’ among the white noise, and it will create a sound profile tailored to your hearing ability. The idea is that you should be able to make out all the detail without straining to hear every word, while raising the volume shouldn’t result in a loss of detail.

How well it works is difficult to quantify, since people’s hearing ability will differ based on the individual. For peace of mind, it’s useful to have – something to safeguard the health of your ears – and it marks the Xellence out from the rest of the competition.

Kygo Xellence sound – Solid enough, but not the most expressive

With the Mimi Hearing ID engaged, it’s a little tricky to make a definitive evaluation since everyone is likely to hear something different. My experience is that the Xellence initially sounded thin: the lack of solid fit being a contributor here, and while they were clear and detailed, that clarity and detail existed in a soundstage notable by how sparse it sounded.

A play around with the ear-tips – I opted for the biggest – and a toggle of ANC and Bass Boost modes managed to fill out the soundstage of the Doves’ Firesuite to describe it in less anaemic terms. 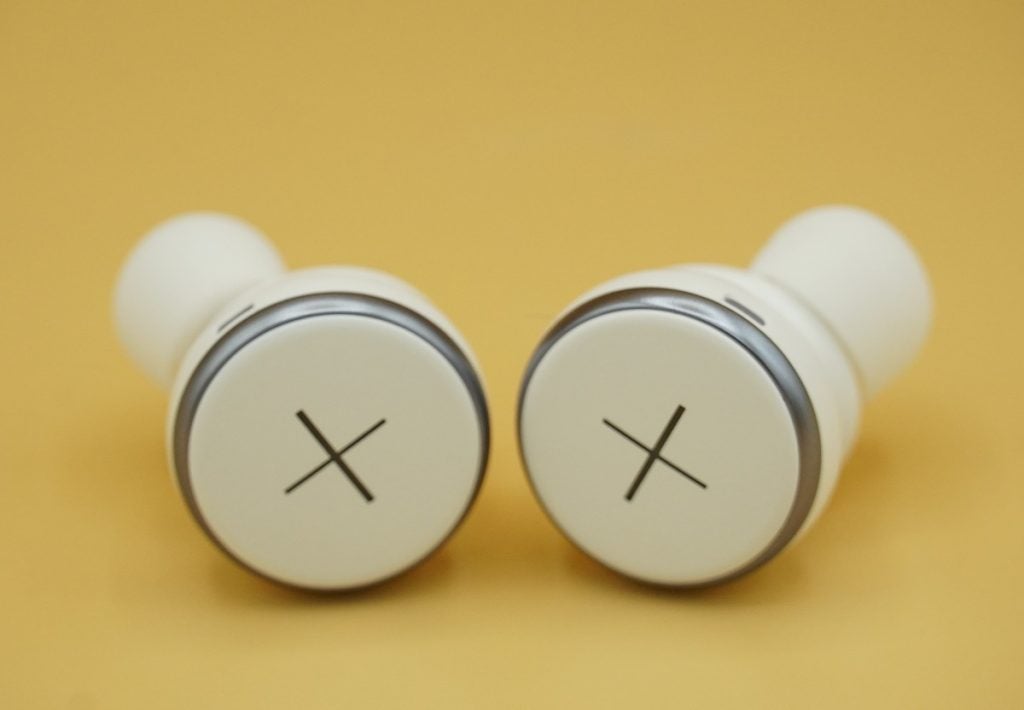 Treble sounds were detailed and bright enough to be distinct in the Singapore Orchestra’s rendition of the Chelsea Tango, a track that provides a decent challenge in terms of dynamism – one the Xellence met with an entertaining description of highs and lows.

The mid-range is natural enough in tone; there’s enough insight for instruments in the Singapore Orchestra to come across as well defined and detailed. While the Xellence aim for a neutral tone, they’re a little too cool and clinical. The Xellence’s neutrality subdues the vocals in Linkin Park’s High Voltage and Thirty Seconds to Mars’ Attack, granting them less a sense of expression and dynamism. 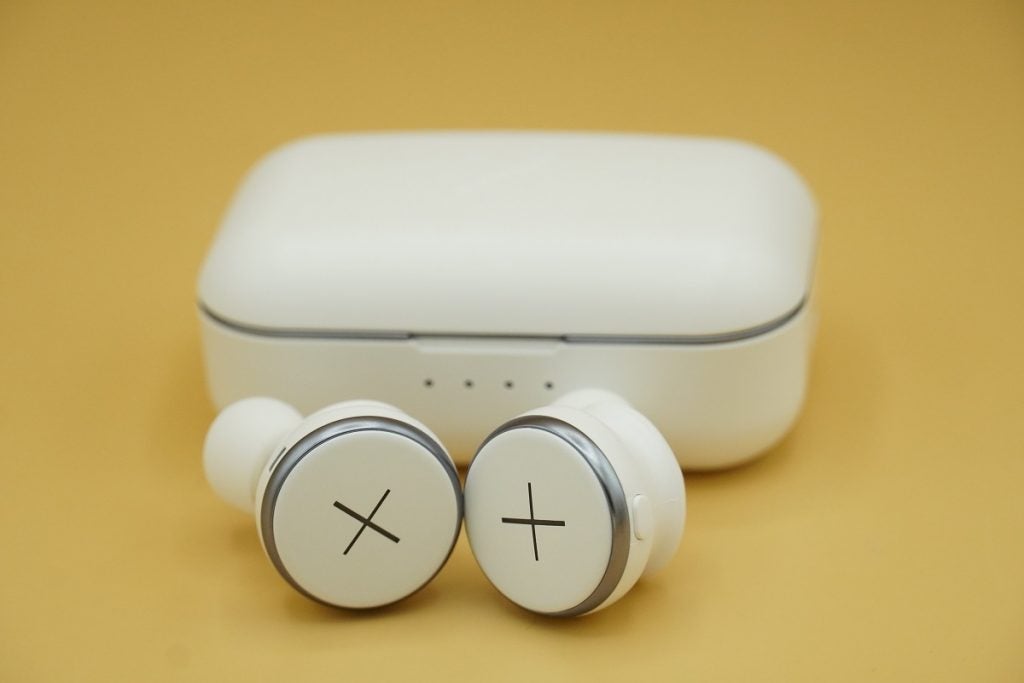 Bass Boost supplies a tight, punchy low-end with some more energy for those who want it. It resists the urge to puncture the mid-range, but if you find it overwhelming then there’s the option to turn it off. For me, though, the performance is altogether less enthusiastic with it off. You’ll want to turn ANC on, too, since there’s a marked difference with it on and off. Without it, music sounds cramped, as do vocals.

You’ll also want to pick the right ear-tips. Swapping to different sizes ends up being rather critical: bigger pairs add to a fuller soundstage but trade a little on detail, while others filter through more detail but sound thinner. Overall, the Xellence sound fine – but my experience was plenty of experimenting to achieve that. Other similarly priced earbuds, such as the Ausounds AU-Stream Hybrid adopt a similar lean tone, but offer more expression and dynamism.

The Xellence are a good effort, but the sum of their parts doesn’t add up to a convincing whole. There’s better noise-cancelling performance to be had elsewhere, and there’s better-sounding true wireless for the same price, too. The Mimi Sound Profile differentiates the Kygo Xellence from the legion of other earbuds on the market, but while there’s style, there isn’t enough substance to gate-crash the upper echelon of wireless earbud market.

You should buy the Kygo Xellence if…

You should not buy the Kygo Xellence if…