If you don’t mind the crisp tone the Ausounds are easy going and consistent entertainers. They’re not the most feature-packed and the likes of Bose and Sony beat them for sound quality, but with rock solid wireless connectivity, stylish looks, excellent fit to go with their impressive ANC/transparency – they’re an enjoyable alternative.

Ausounds is – in the UK at least – a lesser known audio brand that popped up onto our radar late 2020 with its AU-Stream Hybrid wireless earbuds.

The LA-based outfit has been making a name for itself in the audiophile area, with its lifestyle aesthetic as well as a focus on reference audio reproduction.

Normally we’d feel a tinge of sympathy for a brand going up against the likes of Bose, Grado and Sony, but the Ausounds have enough talent to suggest it warrants consideration among the true wireless upper echelon.

The Ausounds AU-Stream Hybrid come in red, gold, black and grey. The review sample I have is the red version, which I think is the most fetching of the bunch. The finish looks exquisite, giving the impression of a wireless earbud ruby.

The ‘ear trombone’ shape has become a popular design among wireless earbuds, reminding me of Creative’s Outlier Air series. It is more svelte than most and unlike, say the Grado GT220, the AU-Stream Hybrid look like a top tier pair of earbuds. 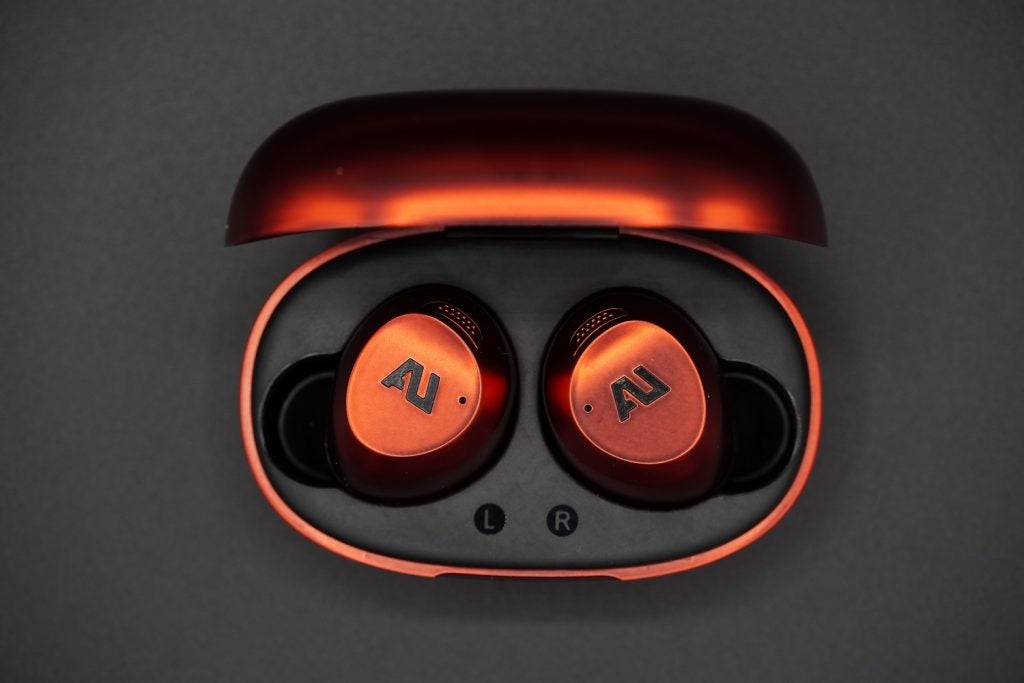 The Ausounds logo is etched onto the case and touch panel, while you’ll notice the vents around the back light up when pairing (blue) or being charged (red). At 6.5g per earbud they’re lightweight and certainly one of the most comfortable I’ve worn. Their ergonomic shape gives the feeling of being moulded to the contours of your ear. The fit makes them an excellent choice for a running headphone as they didn’t budge one bit during a run. In the package are small, medium and large-sized silicone ear tips for a fit that suits you. 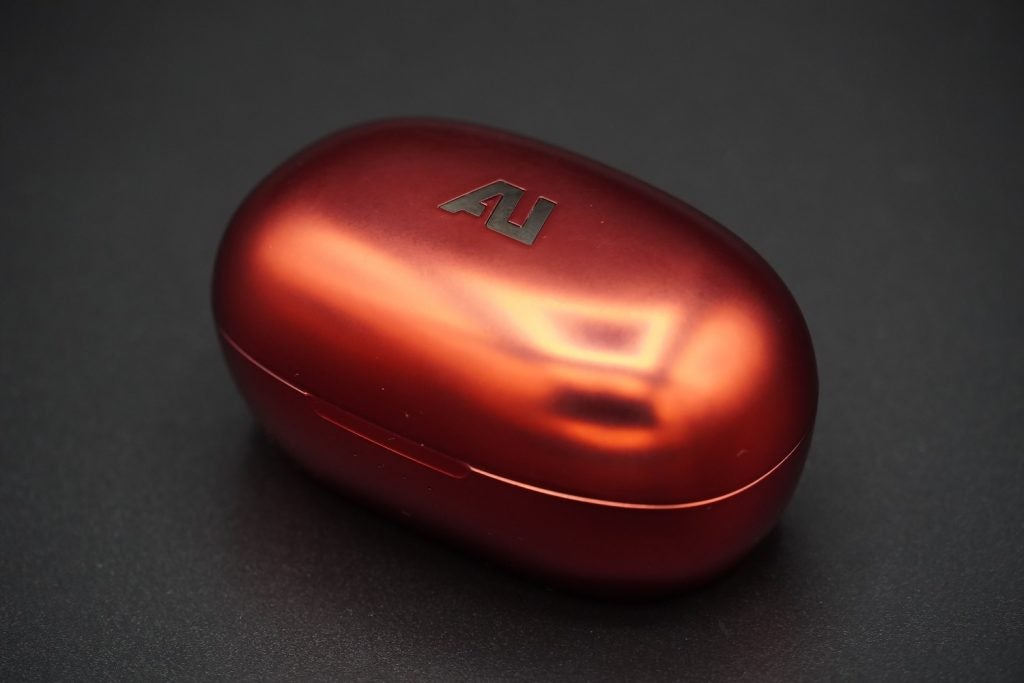 Touch controls have been very responsive and not much pressure is needed to start/stop playback. There are double and triple taps for track skipping and activating a smartphone’s voice assistant, respectively, while a hold for three seconds toggles through ANC/Monitor modes. There’s no onboard means of adjusting the volume.

The accompanying case comes in a matching finish and is quite petite – a little too much for my liking. It’s a fiddly affair prying the earbuds out – or it is for me with my giant hands.

Despite the premium price tag, the Ausounds show no interest in fancier features. It’s clear this is all about the listening experience.

There is the presence of active noise cancellation, and having used the AU-Stream Hybrid over several weeks the performance is very impressive. 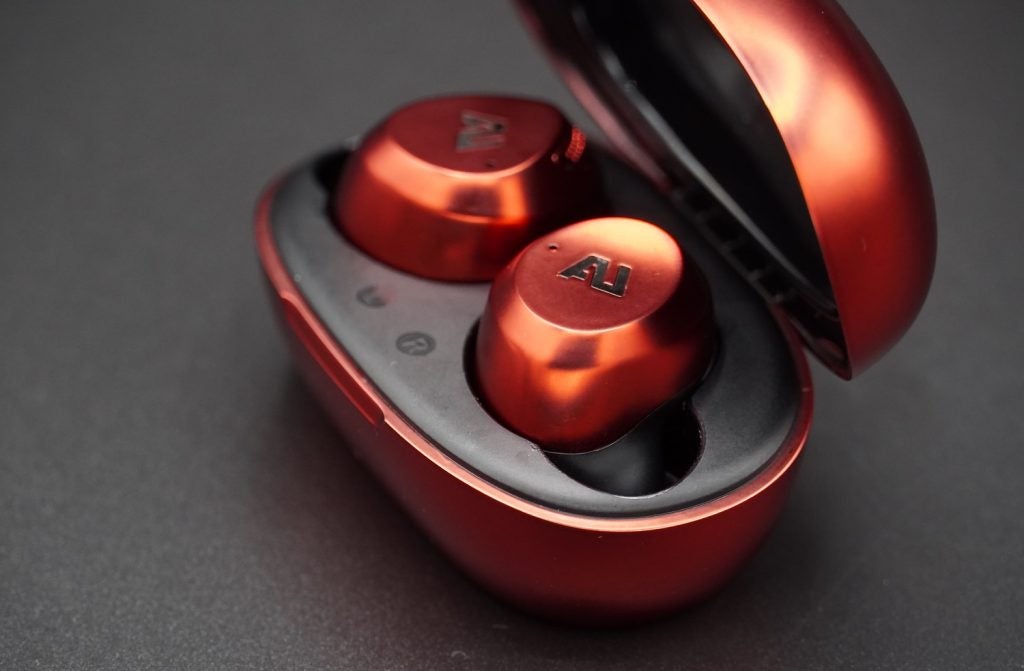 At first I wasn’t a little non-committal on its effectiveness as I could hear children shrieking (happy to be outside it seems), as well as squeaks of trolleys at the local supermarket. It doesn’t deal as well with sharp, transient noises but then again, what earbuds do? Compared to the similarly priced Jabra Elite 85t, the Ausounds’ ANC feels more comprehensive.

Cars are reduced to more of a ‘whoosh’, and with volume up you’ll barely notice them pass by. Walking down London’s Piccadilly St and buses were less intrusive; voices can still be heard but they’re obscured enough. A rare journey on a train was muted, the persistent sounds of the train fading away.

Just as good is the AU-Hybrid’s Monitor Mode. The surrounding environment is so clear, natural-sounding and free of noise you might as well not be wearing the earbuds at all. There’s no ability to adjust levels à la the Bose QuietComfort Earbuds but the on/off option, I think, is fine for most. What’s more with either ANC or Monitor Mode engaged there’s little difference in the quality of playback. It’s a cracking performance, for sure. 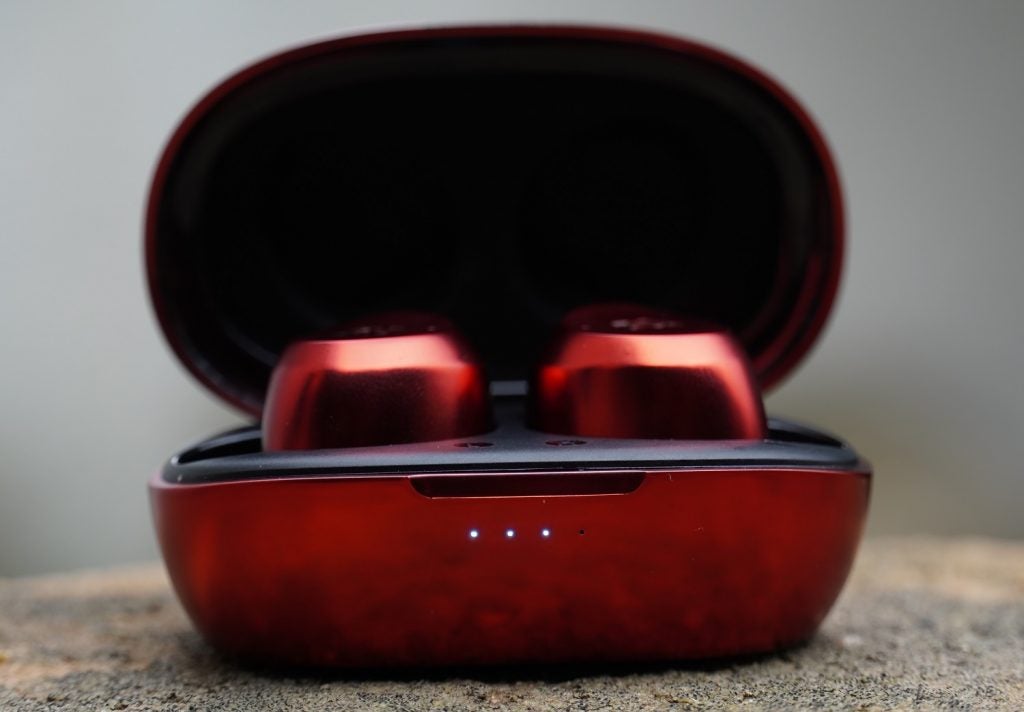 Battery life is rated at 25.5 hours in total but that drops with ANC on (or switching often between modes). Ausounds quotes 8.6 hours (no idea what the .6 means) with ANC off, and 5 hours with ANC on and that seems about right to me. The battery can drain quicker than expected, and there were times where I thought I had charge left only to find there was nothing left in the tank. A re-charge back to full via the USB-C connection takes 90 minutes, while a 15 minute quick charge is enough for another three hours.

Rounding out the feature set is Bluetooth 5.0, which aside from a couple of brief dropouts has been reliably sticky. There was a period where the earbuds would pair and then disconnect, but that seems to have resolved itself. AAC and SBC are supported (no LDAC or aptX), while there’s no Auto-Wear detection, but the IPX5 rating means they’re good for dispelling rain and fit for exercise use.

Call quality is fine. Ausounds mentions a Call Noise Reduction feature and while the clarity of the other person’s voice was ok, they did complain I sounded distant (that might just be my voice). It’s serviceable, but I think you could expect more.

And so we reach the meat and potatoes of the AU-Stream Hybrid’s performance, and they’re fine performers, though I’d imagine some may find they sound too lean.

Inside the earbud is a 9mm AU-Titanium driver that Ausounds says has been tuned to deliver clarity and a spacious soundstage, and I’m inclined to agree with that. The soundstage they evoke across a range of musical genres is wide, and that helps offer a better appreciation of the fidelity they offer. 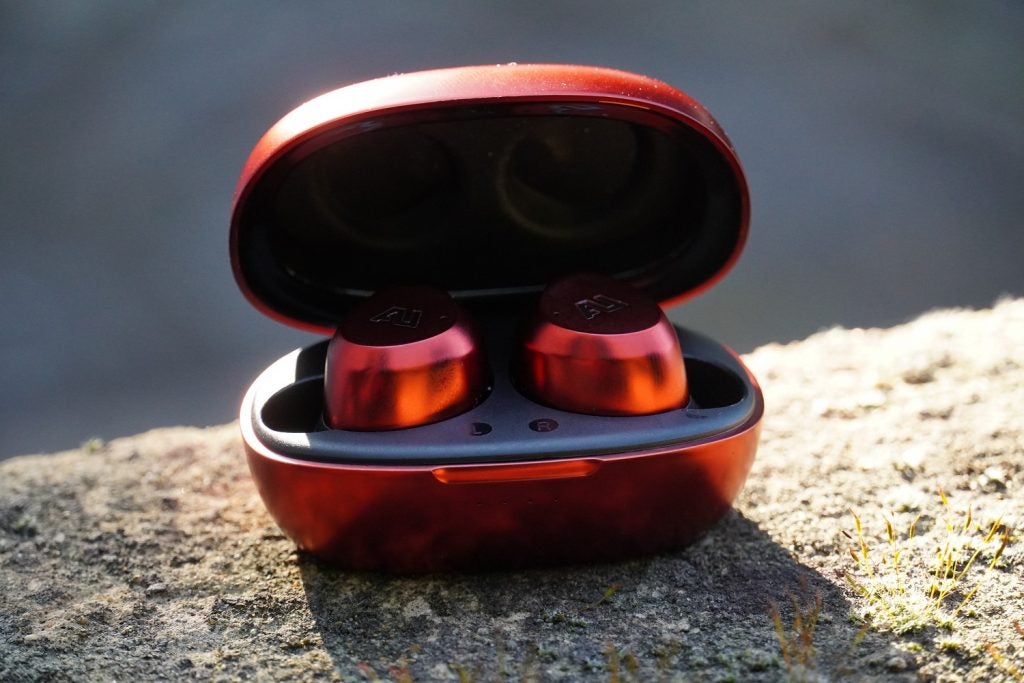 There’s a dexterity that elevates them above cheaper wireless sets. They aren’t fussed by your musical tastes, however erratic they may be. I’ve listened to classical, rock, R&B, Hip Hop, Folk, Electronic and more and they perform capably well.

Their tone is one of consistently crisp neutrality, with a slight bright edge to high frequencies but not to the point where it becomes overbearingly coarse. There is a harsh and lean feeling to the midrange as they’re not overly concerned with warmth, but they manage to achieve a tonal balance that holds your attention.

Vocals are good – perhaps more forward than other similarly priced earbuds – and from Stevie Nicks vocals in Fleetwood Mac’s Dreams to Robert Plant’s in Led Zeppelin’s Since I’ve Been Loving You, they’re defined well enough and given space to co-exist among the song’s other elements. 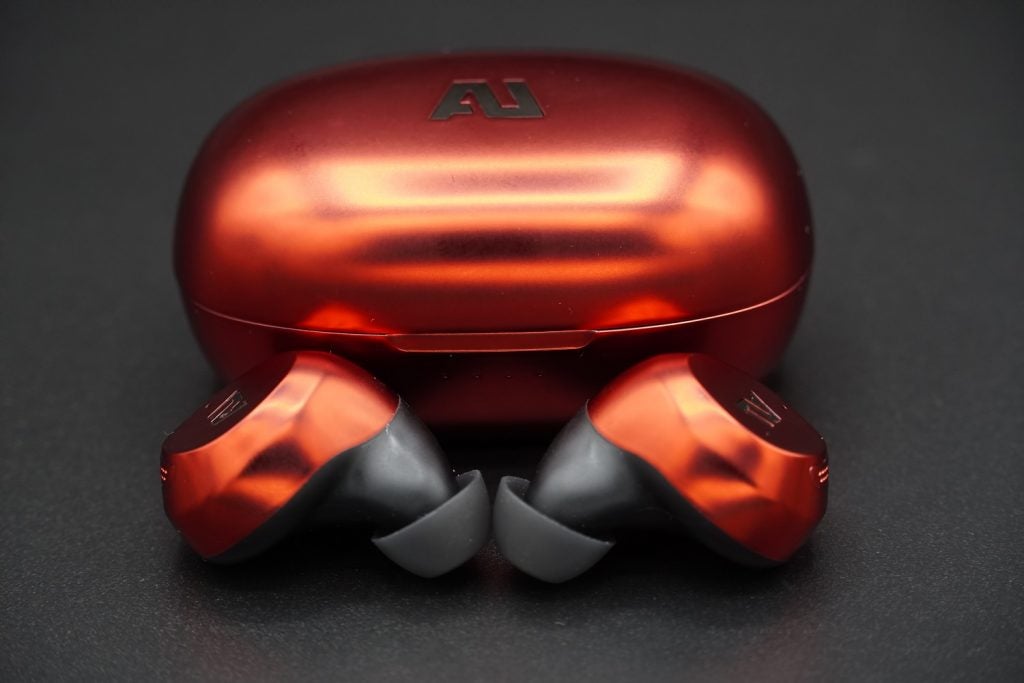 The same feeling is had with Hozier’s Take Me to Church, and while there’s an emotive aspect to voices, there’s also a slight but detectable harshness too. Voices don’t quite have the smoothness or dynamism of Bose’s exemplary QuietComfort Earbuds, and cymbal crashes in both Dreams and Since I’ve Been Loving You are thin and lacking in detail.

Bass is controlled though, both defined and punchy in Talib Kweli’s Supreme Supreme. They are not lacking in terms of drive or enthusiasm either, with the bass in The Prodigy’s Invaders Must Die not just just gobbled up but slammed into with a pleasing meatiness. 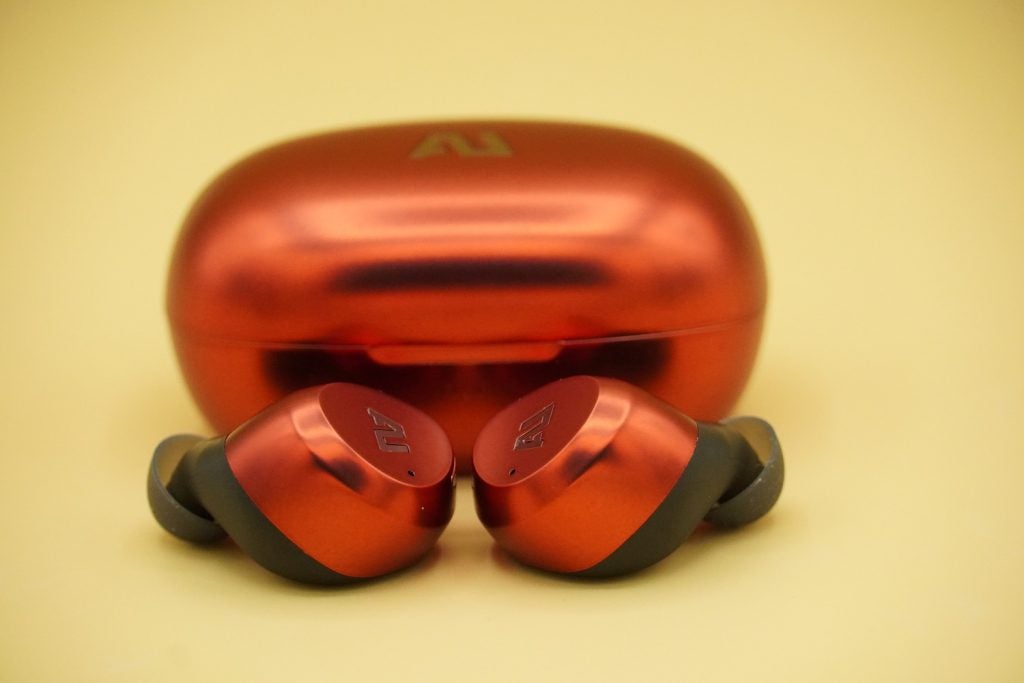 Compared to the WF-1000XM3, the Sonys have more thrust, a bigger, weightier sound and more bass. They’re a bit better in terms of clarity too, especially in the midrange. While the Ausounds are not as lively, they have a slightly wider soundstage.

Dynamically there’s an effective sense of highs and lows, as well as a sense of rhythm that’s happy to play at the pace of Talking Heads’ This Must Be the Place or swap that for the energy for System Of A Down’s more frenetic Radio/Video. I think some may baulk at its lean tone, but I like the tone and zip of the AU-Stream Hybrid.

If you don’t mind the crisp, rather lean tone of the Ausounds then they’re an entertaining performer. They’re not able to bridge the gap in audio quality to Bose and Sony, but the ANC and transparency modes are genuinely impressive.

The focus is firmly on sound, but there’s enough in the spec sheet to cover the what else you need from a robust wireless connectivity to an excellent fit.

The fit is excellent and with an IPX5 rating they should be able to resist rain and sweat, making them a good choice for running and exercise.

Whichever true wireless enters the market at the upper end has to deal with Bose and Sony. The the WF-1000XM3 can be had for £170 makes them the most attractive option under £200. The Bose are around £220 and you’d be mad not to consider.

Call quality is fine, but if you’re going to use your earbuds for calls as much as music perhaps look elsewhere.