The wheel comes into its own when you switch out off auto mode. A dial at the top provides a camera-like range of mode options. There is aperture priority mode, shutter priority mode, fully manual, a user-configurable setting, scene modes, and a specific portrait mode.

In the programme auto and priority modes, a standard exposure setting becomes available via the extra wheel. In shutter priority mode, you can select between ½ to 1/4000th shutter speeds, and in aperture priority mode, between F1.2 and F5.6 iris, although the range drops to F2.8 to F5.6 when fully zoomed, so the JVC GC-PX100 is equipped with a pretty fast lens, although not as fast as some premium camcorders. 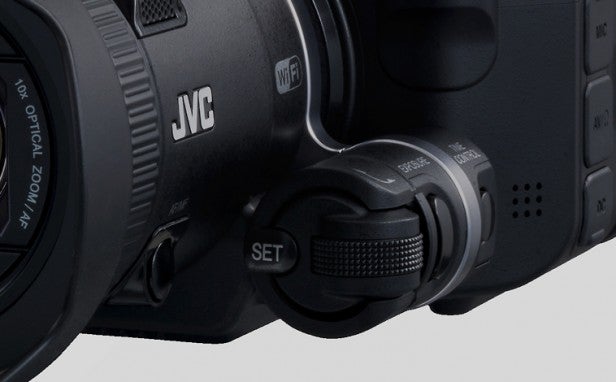 In manual mode, both shutter and aperture can be varied, but the exposure option is no longer available. Scene modes include sports (with both outdoor and indoor options), portrait, landscape, soft skin, landscape & portrait, two different night modes, snow, beach, spotlight, fireworks and sunset.

So the selection is comprehensive, although strangely backlight compensation and soft skin are also included in this category. The only significant functions that require a trip to the touch-screen menu are white balancing, tele macro, and enabling focus assist ord zebra, but they are still only a couple of screen presses away.

With so many other features, the inclusion of JVC’s wireless capabilities aren’t a headline act for the JVC GC-PX100. It has the ability to connect to an existing WLAN or function as a standalone access point, albeit without internet access.

You can access camera functions via the Everio Sync app for Android, iPhone, iPad and iPod touch. However, one feature missing which some JVC cameras have, in particular the JVC ADIXXION GC-XA1BE, is the live streaming via USTREAM, which is a shame, as the JVC GC-PX100 would have been a perfect candidate.

Another app has just become available, too, called JVC CAM Coach. This lets you watch and annotate videos from the camcorder, although it is currently only available for iPads running iOS 6 or higher. 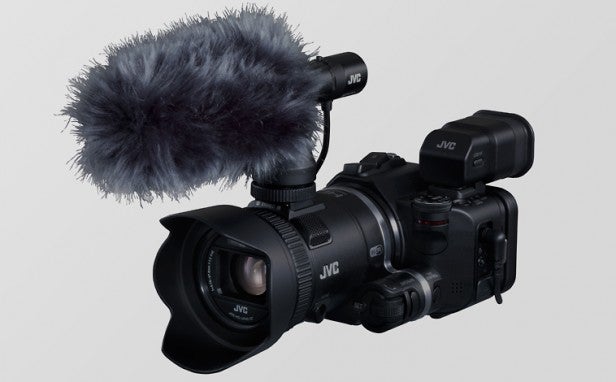 The JVC GC-PX100 has minijacks for an external microphone and headphones, plus a standard-sized accessory shoe, that further enhance its professional credentials. This means you can attach regular on-camera lighting and microphone accessories, too.

The on-board stereo microphone is decent enough, but you will still want to add something external if you are really serious about your videomaking. Microphone and headphone level adjustments are available via the touch-screen menu.

It’s hard to fault the GC-PX100’s image quality in any respect. Colour is accurate and full, without being overly saturated. There is a high level of fine detail, and although the Panasonic HC-X920 should in theory go one better still, due to its trio of similarly sized sensors to the JVC’s one, in practice we couldn’t discern between the two.

Low light abilities are on par, too, with the JVC GC-PX100 coping equally well with our tests of poor illumination, although we found the JVC was more in need of manual adjustment than the Panasonic to get the best in these conditions.

The JVC GC-PX100’s image stabilisation isn’t quite as capable as the HC-X920’s, either, but it is still very effective. We don’t normally test camcorder still image abilities to the same level as in our digital camera reviews, but in this respect the GC-PX100 did put itself ahead of Panasonic, with more fine detail in its photos, despite the latter’s higher maximum resolution. The JVC GC-PX10 was an interesting move from JVC, but with the GC-PX100 the idea has hit a sweet spot. As a camcorder, its digital camera styling seems almost irrelevant, since the video feature list is entirely comprehensive. The control system is also a joy to use, giving you rapid access to settings from automatic to fully manual, with plenty of options in between. Image quality is excellent, in both video and stills modes.

So overall this is a great competitor to the superb Panasonic HC-X920. Our only concern is the price. The JVC GC-PX100 is not hideously expensive like the Canon EOS C100, but it is slightly more than the Panasonic flagship, with very similar features. Nevertheless, if you do want the best of both worlds in one package, but with a video bias, the JVC GC-PX100 is the most accomplished hybrid on the market.

The JVC GC-PX100 is pricey but brilliant, and it’s the best camcorder of its type in the market. If you’re a serious videographer with demanding requirements, the PX100 is more than likely up to the task.