JVC has never been a company scared of doing things a little differently. The first to put a hard disk in a consumer camcorder with its original Everio range, JVC has also frequently gone out on a limb with chassis design, such as the GC-PX10, which pretends to be a digital camera. So, although JVC has already had a crack at the rugged camcorder with the PICSIO GC-WP10A, it’s no surprise that the company now has a much more unusual rugged camcorder in the shape of the enticingly named JVC ADIXXION GC-XA1BE. 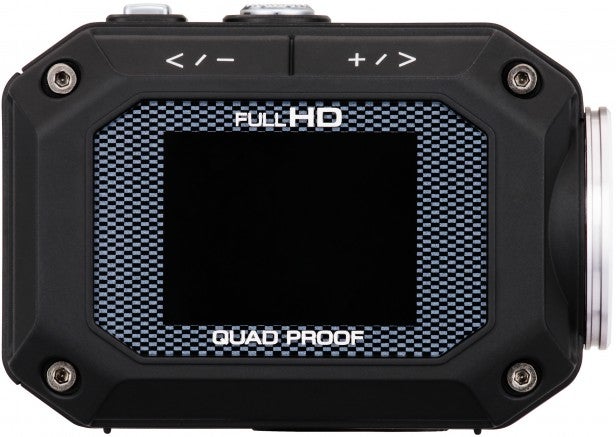 The ADIXXION is really not like any other rugged camcorder on the market. Despite being about the size of two stacked matchboxes – measuring just 74 x 53 x 35mm – it still manages to pack in a very small 1.5in colour LCD, which means you can change settings using a menu system and actually see what the camcorder will be shooting, unlike almost all bullet-style action camcorders.

JVC is calling the ADIXXION’s design “Quad-Proof”, because it’s waterproof to 5m, shockproof when dropped from up to 2m, dust proof and freeze proof. The design is certainly very rugged, and the only flap is secured by a clever double-action switch, making it highly unlikely you will open it accidentally. JVC also provides a couple of protective films and two plastic lens protectors in the box, so you can keep the unit operational in extreme conditions.

Ruggedised action cameras generally come with a host of attachments, for example the Dogcam Bullet HD Wide and Dogcam MiniDVR HD. JVC’s ADIXXION doesn’t include the comprehensive range of fixings that Dogcam’s cameras are supplied with, but there is still plenty in the box for a wide variety of activities.

Two adhesive base plates are included, although just one mount. Presumably, the idea here is that you leave the base plates attached and move the mount between them. There is also a belt mount, which requires screwing a belt attachment onto a mounting plate. A Roll Bar Mount and Float Strap are also available, but only as optional extras. The ADIXXION itself has two regular screw mounting positions, on the bottom and the side, further increasing shooting flexibility. 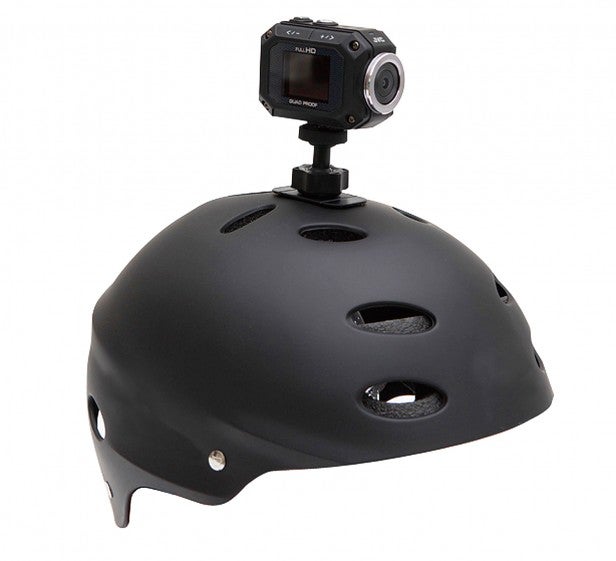 The ADIXXION is based around a 5Mpixel CMOS of undisclosed size. Video resolution options max out at 1080p Full HD at 30 frames per second. You can also shoot 720p at 30 and 60 frames per second, and there’s also a curious 960p option, as well as WVGA (848 x 480), both of which operate at 30 frames per second. This isn’t quite the 4K of GoPro’s recently announced Hero 3, but will be more than enough for most users. Video is recorded to SD card, using a slot beneath the aforementioned flap. At the top data rate, which equates to around 15Mbits/sec, a 16GB SDHC card will be enough for around 140 minutes of footage. 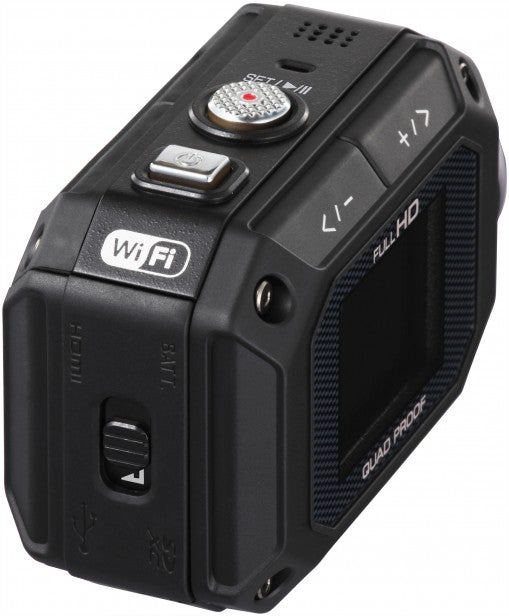 Although the ADIXXION does have a menu system with some user-configurable features, there aren’t that many manual camcorder settings on offer. Image stabilisation is available, but only the digital variety, although this is better than nothing. The 5x zoom is also digital only, presumably as much for robustness as it is due to the camcorder’s small chassis size. You can choose between automatic white balance, two fluorescent options, tungsten, plus both blue and green underwater settings. There’s a time lapse function which will grab a frame every one or five seconds, as well as a self-timer which will trigger recording ten seconds after you hit the button. Picture inversion flips the image over, which is useful if the camera is installed hanging upside down.

There’s a lot more to the JVC ADIXXION GC-XA1BE than just a rugged action camera. It is also equipped with built-in WiFi connectivity. To set this up you need to install the included software, which here is different than that used with the Everio WiFi cameras, such as the GZ-GX1. Rather than the latter’s Everio sync, an app called WiVideo is supplied, which is not just a re-skin but entirely different software.

WiVideo installs on a desktop PC or notebook directly from the camcorder when you connect the ADIXXION via its USB cable. You can then use the application to transfer video files to your PC, and set up the WiFi on the ADIXXION, although annoyingly the automated process only works with a WiFi-equipped PC. Otherwise, you will have to enter the SSID and password manually. You can also use this software to upload footage to YouTube, Facebook, Picasa and TwitVid. A driver is supplied so you can use the ADIXXION as a wireless webcam in Skype and MSN too. 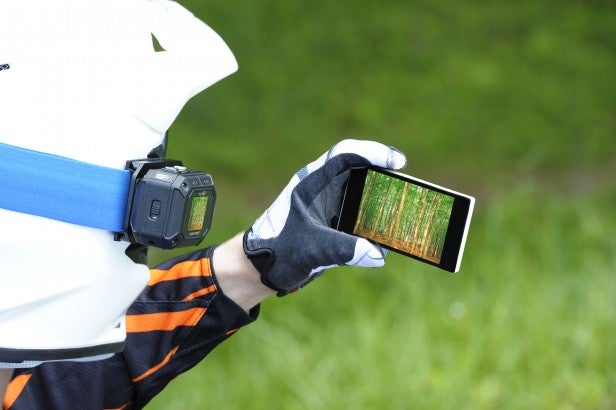 There are WiVideo apps for iPhone and Android, as well. These let you control the camcorder remotely, including the digital zoom, and trigger record, as well as browse the stored video in the camcorder’s memory. Most exciting of all, however, is the integration with USTREAM. Again, the desktop software is used to create an account and upload the settings to the ADIXXION. But then you can use the built-in menu to enable USTREAM mode, and your video will then be streamed wirelessly to your USTREAM channel page. Flip was planning something like this for its next product, which sadly didn’t see the light of day when Cisco discontinued the brand in April 2011. The forthcoming GoPro Hero 3 will also have wifi built in. But for now the Adixxion is one of the few camcorders with this facility, making it an exciting prospect for live guerrilla video. The one downside is that the WiFi features won’t work if the battery is depleted below a certain level, and you can’t power the device externally without having the flap open. 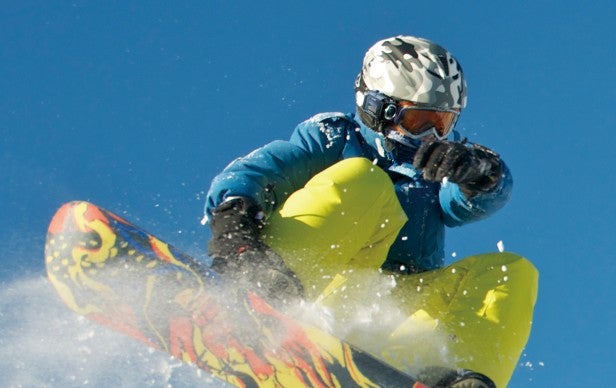 With its small, fixed lens the ADIXXION can’t quite deliver mainstream camcorder image quality. But it still does reasonably well. Colour is faithful if not stunningly vibrant, and there’s a reasonable level of detail. The relatively high data rate means this detail isn’t overcome by artefacts from aggressive compression. Image stabilisation is only mildly effective, but that’s still better than nothing if you are engaged in bumpy activities. Low light performance is also surprisingly good, which will be particularly useful if you make use of the ADIXXION’s underwater shooting capabilities. In this respect, this camcorder is notably ahead of most action cameras, which often don’t perform well in poor illumination. The ADIXXION is a much more flexible camcorder due to its tolerance of variable lighting conditions.

JVC’s Adixxion GC-XA1 is a relatively pricey action camera, at around £300. But it is also of high quality construction, with lots of useful features. It has stoked a fair bit of interest in professional circles, as a tool for capturing extreme sporting events from the point of view of the participant. If your focus is more on motorsports, Dogcam’s MiniDVR-HD, with its secondary recording unit, could be a more appropriate option. But for extreme sports, particularly in a space where the WiFi USTREAM capabilities can be used, this is an action camera with plenty of flexibility.