The DLA-X75 is a £6,550 high-contrast, THX-endorsed D-ILA projector sporting 3D playback and JVC’s proprietary e-Shift2 4K technology. It’s a serious projector for serious enthusiasts, and comes from a brand with a great pedigree for reference standard projectors. Before you get too excited about this mention of 4K, however, while e-shift 2 does, as we’ll find, have a very positive impact on picture quality, it does not mean the X75 is a 4K/Ultra-HD projector in the way you might expect…

The JVC X75 is a substantial bit of kit. Its elongated shape, unusually large centrally mounted recessed lens and striking-looking vented ‘wings’ join with a serious amount of heft to create a sense that this is seriously uncompromising projector. Though having said that, it doesn’t differ significantly in size, shape or weight from the entry-level JVC X35, which can be yours for well under three grand these days.

The only key aesthetic differences between the X75 and its cheaper siblings – the recently tested £4,700 JVC X55 as well as the X35 – are that: the black X75 isn’t available in optional white; the X75 features an automatic lens cover while the cheaper models don’t; and the X75’s top edge wears two important logos: THX and ISF.

Both these logos are of major importance to the sort of serious movie fan the JVC X75 is aimed at. The THX one shows that the X75’s performance has been certified as attaining the demanding standards – in both 2D and 3D mode – of the independent THX group, with THX also providing a picture preset. The ISF (Imaging Science Foundation) endorsement, meanwhile, is only given to kit equipped with enough calibration tools to support a professional installation by an ISF-certified installer.

Among the tools helping keep the ISF happy are an exceptionally flexible 7-axis colour management system, expansive greyscale and gamma adjustments, and a set of picture presets that include no less than five slots for storing your own preferences for different types of source.

Continuing a hunt for ways the JVC DLA-X75 differs from the X55/X35, it turns out that the X75 supports 10 lens memories versus five on the X55. These lens memory slots let people with 21:9-ratio screens to set up lens setting preferences (zoom and focus values, predominantly) for multiple movie aspect ratios, rather than having to buy an expensive external anamorphic lens attachment.

The JVC X75 also scores over the X55/X35 with its connections. It provides a D-Sub PC port while the X55 and X35 do not, and rather brilliantly its LAN port can be used to autocalibrate the projector with the help of a commercially available optical sensor, and a connected PC. This is a great feature we’d expect to see getting much greater traction on high-end projectors in the years to come.

Arguably the most significant difference between the spec sheets of the JVC X75 and X55/X35 finds the X75 boasting a native contrast ratio of 90,000:1 versus the 50,000:1 of the X55 and X35. The prospect of the X75 delivering a contrast performance almost twice as good as the already outstanding one witnessed on the X55 has got us drooling.

It’s worth underlining the point here in case you didn’t fully clock it that the 90,000:1 contrast ratio is a native one. This means that the X75 is capable of delivering such a huge contrast figure within a single image frame, rather than having to depend on the dynamic iris system used by most projectors whereby light output is reduced during dark scenes to produce a convincing black colour. This should result in the X75 presenting dark scenes with much more dynamism and stability.

The X75 does, unexpectedly, come up short of the X55 in one spec area: brightness. It claims 1200 Lumens vs the X55/X35’s 1300. But this isn’t a big difference, and certainly doesn’t amount to a hill of beans compared with the potential contrast boost the X75’s enhanced D-ILA optical system delivers.

Leaving the X75’s differences with the X55 and X35 behind, let’s move on to setting the JVC DLA-X75 up. Basically this is about as easy as it gets, thanks to motorised zoom, focus and optical image shift systems that provide a superb range of flexibility and accuracy, helping the X75 fit into almost any room size or shape. 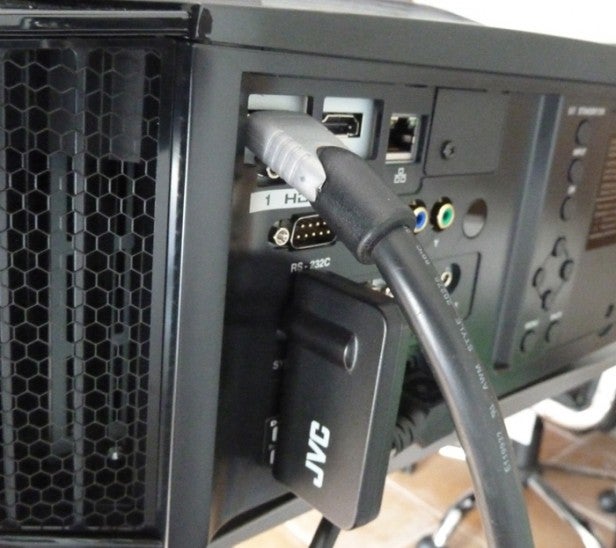 The only set-up issue to note is that the X75 doesn’t have its 3D transmitter built into its body work. Instead you need to attach a special dongle to a 3D Sync port on the projector’s rear. This dongle isn’t necessarily included as standard, either; it has been left up to retailers to decide if they include the necessary 3D transmitter ‘dongle’ and any glasses.

The most common approach among the retailers we checked is to offer the projector at a starting price without the 3D kit, but offer the kit – which comprises the 3D dongle and two pairs of JVC’s active shutter, RF-type glasses – for around £300 extra.

The 3D dongle is only slightly bigger than a normal USB archive stick
and so tucks onto the projector’s rear without causing any potential
installation headaches. Set around it is a decent suite of connections,
including two HDMIs (v1.4 affairs so they’re capable of receiving 3D
sources), the aforementioned LAN and D-Sub PC ports, an RS-232 control
port, and a remote control mini-jack.

Next
JVC eShift 2 and the ‘4K’ Effect Review